Award-winning actor Craig McLachlan allegedly left a woman feeling ‘trapped’ by assaulting her while he was meant to be simulating a sex act during a production of the Rocky Horror Show.

The detail has been revealed by a prosecutor as McLachlan faced Melbourne Magistrates Court on Monday.

The actor is facing multiple charges, including counts of indecent assault, one of attempted indecent assault and others of assault, involving four complainants who were part of a production of the long-running musical.

McLachlan denies the accusations and a magistrate will decide whether or not to find him guilty after a contested hearing expected to run for three weeks.

In an opening statement, prosecutor Matt Fisher said some of the allegations relate to a bedroom scene in which McLachlan was meant to be simulating a sex act, while out of sight from the audience.

‘It is alleged the accused went beyond the role he was directed to perform,’ Mr Fisher said.

The lawyer said McLachlan kissed one woman actor’s neck, stomach and buttocks during the scene on more than 20 occasions.

On one occasion, he also allegedly ‘used his finger to trace around the outline of (the victim’s) vagina’.

‘(The victim) felt as if she was trapped,’ Mr Fisher said.

McLachlan has also been accused of pushing his groin into the stomach area of another woman while he was wearing black boxer shorts with a tiger on the crotch, while his penis was partially erect.

He allegedly kissed the same woman during a show, without being directed to do so, forcing his tongue into her mouth.

‘You really are a cheeky f***er aren’t you,’ she said to him afterwards.

‘Don’t you ever do that to me again.’

McLachlan allegedly replied: ‘Don’t you dare speak to me like that. You are nothing, I will end you.’ 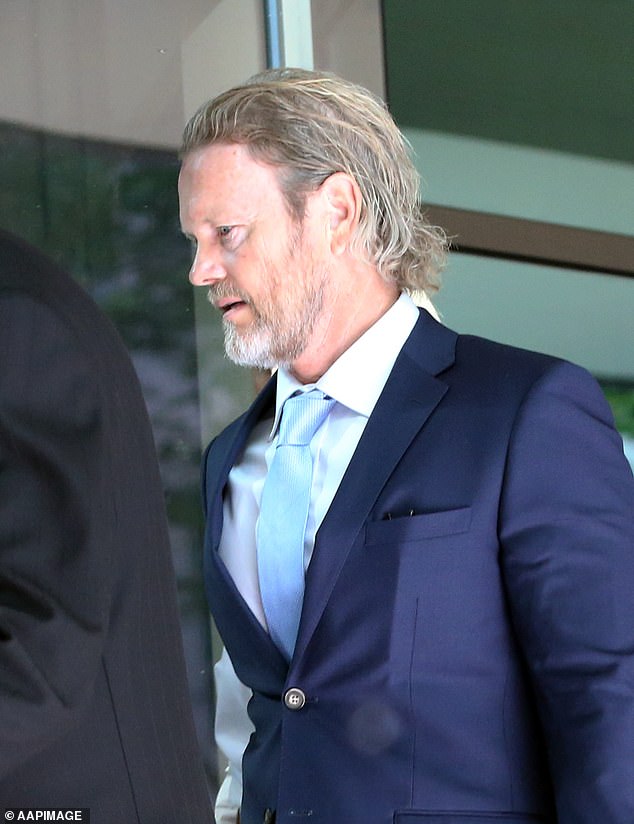 The woman then pretended she had been joking to placate him.

McLachlan has also been accused of tickling another woman’s foot and reaching up towards her groin, while he was out of sight of the audience.

She looked down and saw McLachlan with ‘what she described as a gleeful expression on his face’ and kicked out at him.

‘Wow mate, you nearly kicked me on the head,’ he allegedly later told her.

McLachlan’s lawyer Stuart Littlemore QC said the actor is pleading not guilty to the charges.

He will argue that some of the alleged incidents didn’t occur, while others weren’t indecent.

Mr Littlemore said when McLachlan had given a woman an unexpected kiss on stage, he had the ‘licence and discretion to ad lib’.

McLachlan appeared relatively emotionless while the lawyers spoke, and was flanked by his opera conductor partner Vanessa Scammell.

The four alleged victims will give evidence about the incidents in a closed court.

McLachlan became a household name for roles in the Australian soap operas Neighbours, and Home and Away. As well as various Logies, in 2015 he won the Helpmann Award for Best Male Actor in a Musical.

He launched defamation proceedings against Fairfax Media, the ABC and a former co-star in 2018 but that case has been delayed until after the criminal charges are dealt with.