Young Pakistani spectators carry British flgs during a T20 cricket match between Pakistan XI and UK Media XI at the Younis Khan Cricket Stadium in Miranshah, the former stronghold of Al-Qaeda and Taliban militants, in North Waziristan on September 21

Thousands of cricket fans cheered on their favourite stars and waved signs proclaiming: “We want peace” at an international exhibition T20 match Thursday in the former Taliban stronghold of Miranshah, as authorities proudly showcased the area as free of militants.

The friendly match between a Pakistan XI, made up of several former cricketing giants, and a visiting amateur UK eleven in the country’s restive tribal belt comes weeks after US President Donald Trump blasted Islamabad publicly, accusing the ally of supporting militant safe havens in the region.

Stretched along the Afghan border, North Waziristan’s Miranshah was once a de facto Taliban state that hosted foreign jihadists including leading figures from Al-Qaeda and served as a launching pad for attacks into Afghanistan. 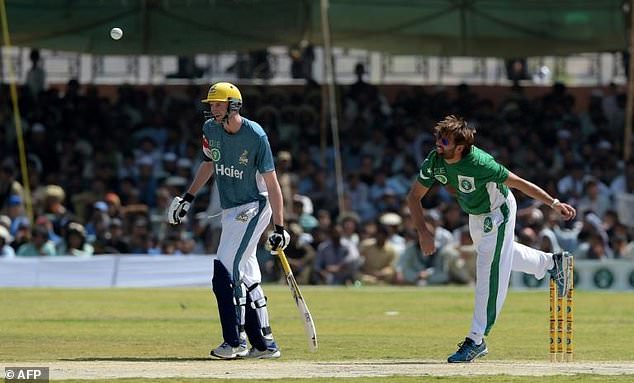 Pakistan XI bowler Shahid Afridi (R) delivers a ball next to UK Media XI batsman during a T20 cricket match between Pakistan XI and UK Media XI at the Younis Khan Cricket Stadium in Miranshah, the former stronghold of Al-Qaeda and Taliban militants

But in 2014 the Pakistan army launched a clearance operation in the tribal district to wipe out militant bases and bring an end to a bloody insurgency that has cost thousands of lives since 2004 and strained ties with Washington.

Leading former Pakistan cricket legends Shahid Afridi and Inzamam-ul-Haq took to the lush pitch to the roaring approval of more than 20,000 fans in attendance, who had been massing since early in the morning for the rare chance to see a form of international cricket played live.

“It feels like I’m in Gaddafi stadium in Lahore or in Islamabad today. It doesn’t feel like the old Miranshah infested by the militants,” said Fahimullah, a 31-year-old school teacher. 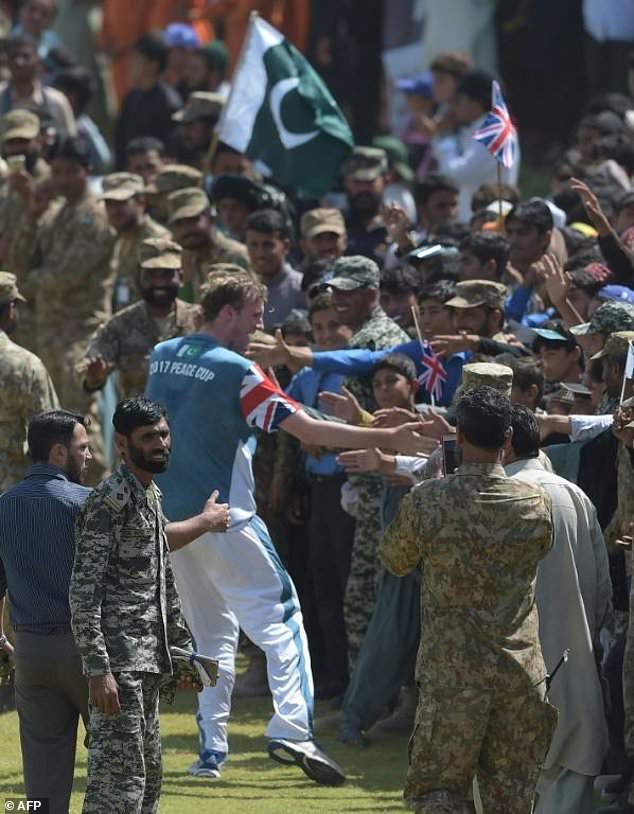 Batting first, Pakistan scored 254 runs in the 20-over match, with the UK batsmen struggling to reach 121 for seven wickets.

There was some confusion between players and scorers over the precise final figures.

Alex Massie, a player for the UK side, tweeted that Pakistan lost only one wicket, confirming that his side lost seven.

“I nearly got Inzaman out caught behind,” he said.

“An astonishing, magical time,” he added. “What a place to visit.”

Pakistan’s former captain Inzamam and the immensely popular Afridi hit some towering sixes and brisk boundaries leading their team to victory against the British side.

“I have not seen such a big match here before today,” said schoolboy Faizan Khan.

“We could not go out earlier because of Taliban. The situation was very bad then, but now they have disappeared, I don’t know where have they gone.”