Jofra Archer was aged just two when he picked up a makeshift mini cricket bat made by his grandfather on a beach in Barbados.

It was from this moment his obsession with the sport began. Fast forward 22 years, and his dedication has taken him all the way to a World Cup final at Lord’s.

But while fans were on the edge of their seats as England’s hero bowled the dramatic Super Over against New Zealand on Sunday, the 24-year-old’s father kept a cool head.

Frank Archer, 55, said he had every confidence the fast bowler would hold his nerve to help secure England’s triumph, having witnessed his talent from an early age.

Jofra Archer was aged just two when he picked up a makeshift mini cricket bat made by his grandfather on a beach in Barbados (pictured: Frank with baby Jofra)

‘You could see it from as early as four, we could tell Jofra was different,’ he told the Daily Mail.

‘At four he was bowling with his arm straight – people were amazed. He just copied it from TV, we knew from then he would be something different.

‘It was a plan from age eight – it was our mission statement and he repeated it back to me – to get a scholarship and play for England or the West Indies, whichever worked out.’

Mr Archer, a retired London Underground driver, had such high hopes for his son that he even predicted he would become ‘the Michael Jordan of cricket’. 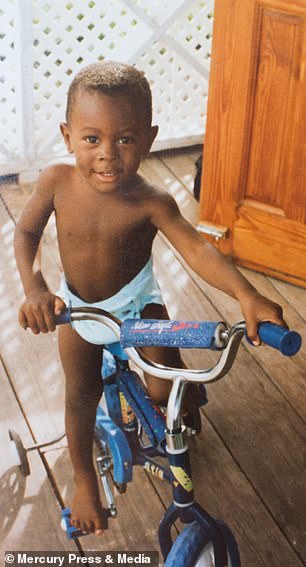 Gifted: Jofra rides a bike as a toddler

‘I made a couple of predictions,’ he added. ‘I told him that he would definitely make the [England] team. I told him he would be in an advert – now he is in one for Adidas. This is the Jofra Archer show, and it’s only just beginning.’

Jofra was born in Barbados and was just three when his parents split up. He was raised by mother Joelle Waithe and his stepfather.

But Mr Archer, who was born in Catford, south London, fought through the courts to remain part of his son’s life.

He made regular trips to the Caribbean and urged Jofra to visit the UK, paying for him to be chaperoned on trans-Atlantic flights from the age of eight, when he got his British passport.

Young Jofra was so in love with cricket that, during one visit, he joined in with a casual cricket match taking place in Hyde Park.

And aged 13 he took two wickets against an adult second division team after being invited to play at Blackheath Cricket Club, south-east London. An agent even said he had the best bowling action of any child he had seen.

So when Jofra’s career took him to this year’s Cricket World Cup on home soil, Mr Archer told him: ‘This is your moment, everything has brought you here, go get them.’ And after England powered their way to the final against New Zealand, the nation’s hopes were resting on Jofra’s shoulders as he stepped up to bowl a nail-biting Super Over to decide the match. 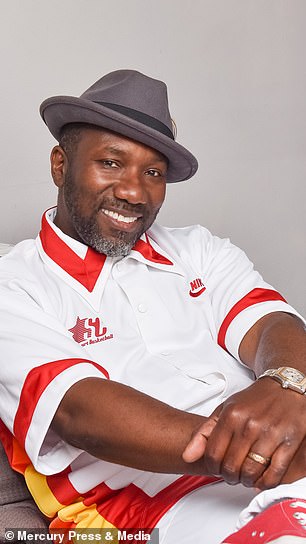 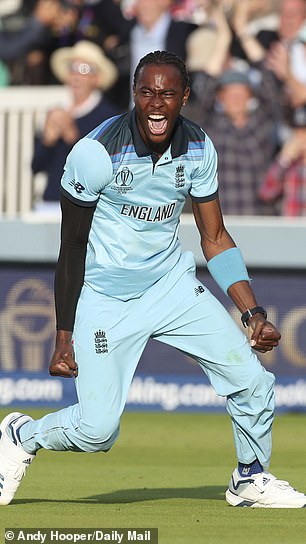 ‘I knew it wasn’t above him, I knew he could do this,’ said Mr Archer. ‘Jofra handled it intelligently and calmly. That was really, really excellent. It’s a fairy-tale, it’s the kind of thing you see [in a film] like the Mighty Ducks or Cool Runnings. It’s epic, one of those days people will never forget.’

Sadly for Mr Archer, he was not at Lord’s to see the biggest moment of his son’s career.

There is still too much animosity between himself and Jofra’s mother Joelle for the pair to celebrate together.

Instead, he watched from a bar in Liverpool, where he now lives with his second wife, Kirsten Henriksen, 45, a social worker.

‘I made the bar go crazy,’ he added. ‘I was saying, “My son just brought the World Cup home for England”. It was a unique moment. It was surreal to see the reaction, in the media, in Trafalgar Square. 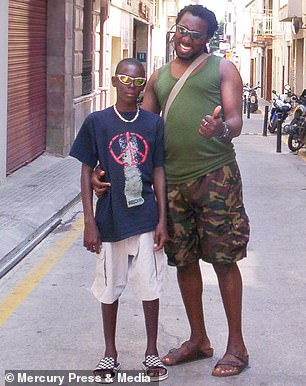 Pictured: Jofra Archer on holiday in Spain with his father

‘He’s been to Downing Street, imagine that. Now Jofra is going to meet the Queen – that’s your dreams coming true. It’s the stuff of legend.’

He also revealed that his son’s achievement was all the more impressive because when Jofra was born, doctors warned he may be disabled because of underdeveloped muscles in his hands.

Medics even advised his parents to encourage their son to play video games to make him more dextrous. It certainly worked – Jofra is now capable of bowling deliveries with both hands.

His World Cup dream, however, was almost derailed at the beginning of the tournament when Jofra’s cousin, Ashantio Blackman, was shot dead outside his home in Barbados on May 31.

The pair were the same age and ‘really close’, Mr Archer said. ‘Jofra was really affected by his death but had to carry on and did his best to hold himself up.’

Critics have questioned Jofra’s eligibility to play for England, with the player switching allegiances from West Indies in 2014.

But Mr Archer insists his son always dreamed of playing for England. ‘Maybe it was fate. I am happier for Jofra to play here.’