Just when you thought you’d seen every cricket shot in the book, THIS happens: Batter smashes insane boundary between his legs like Nick Kyrgios with his ‘Tweener’

Look out, cricket world, a new shot has been invented at grassroots level on the subcontinent and it could be set to explode in a major competition soon.

The video in question shows a batter in a gully cricket match. Gully cricket is essentially the same as backyard cricket in Australia, except it can be played literally anywhere.

As the ball is fired in, the batsman casually parts his legs and slams the ball through the gap so it races away to the boundary.

Now the question is, which professional player is going to try the shot first in the Indian Premier League?

One fan reckons it is a race between Indian limited overs specialist Krunal Pandya and big-hitting West Indian Shimron Hetmyer, although Australia’s Glenn Maxwell should also be on the short list.

The shot is also reminiscent of a reverse ‘tweener’, the between-the-legs tennis shot made famous by Australian star Nick Kyrgios.

Kyrgios has made the ‘Tweener’ popular, often returning the ball by flicking it through his legs 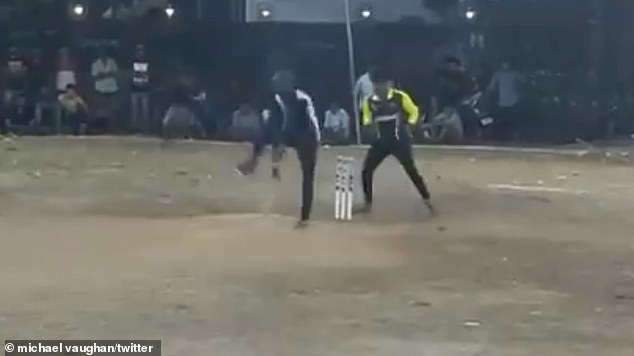 This new shot in cricket works in a very similar way, just in reverse

Given that the viral video has over 500,000 views and counting, it may only be a matter of time until we see the shot on the big stage.

There have been many inventive shots created for T20 cricket in recent years, including the switch hit, the paddle sweep and the upper cut.

One of the earlier innovations was the scoop or ramp shot, which sees the batsman pummel the ball back over their head where there are no fielders waiting.

Former Sri Lankan international Tillakaratne Dilshan has long tried to claim credit for inventing the shot, which is referred to as the Dil Scoop.

However, Dilshan learned the shot from Australia’s own Ryan Campbell. Sri Lanka were playing Australia A in an ODI match in 2002 when Campbell made national headlines by unleashing the shot several times.

It was the first time anyone had seen it, but Dilshan took careful note and adopted the technique for himself.