Criminals apply for 6,000 jobs in the classroom

Schools have received almost 6,000 job applications in the past 18 months from teachers with criminal records – including those guilty of paedophilia, rape and attempted murder.

Others have been convicted of flashing, blackmail and heroin possession.

Some serious criminals are automatically barred from working with children – but the majority of decisions are made by schools.

This means there could be thousands of convicts working as teachers, classroom assistants, or even headteachers. MPs described the findings as ‘astonishing’.

The 5,841 applications include more than 200 burglars, 1,000 shoplifters, 25 drug dealers and 254 people convicted of possessing drugs, including 20 for heroin. Flashers, blackmailers and those caught using prostitutes also applied for jobs.

Schools have received almost 6,000 job applications in the past 18 months from teachers with criminal records

The number of criminals applying to teach has increased since 2013, when there were 1,500 seeking school jobs every year. The latest figures, released under the Freedom of Information Act, detail the number of applications that revealed convictions – but not whether they were successful. They could include applicants who have applied for multiple positions, or those with more than one crime to their name.

Although they must be disclosed, the majority of criminal acts do not prevent people teaching and candidates will be allowed to explain their past. Violent and sexual offences against minors are included on the list of crimes that automatically bar people from working with children.

Despite this, in 2013 a teacher who downloaded child sex abuse images was allowed to resume his career by the Department for Education. Geoffrey Bettley, 36, was sacked, given a police caution and ordered to sign the Sex Offenders’ Register after admitting viewing sickening material over several years.

However, a professional conduct panel said the married RE teacher could return to the classroom because of his ‘excellent teaching’.

Every year there are also dozens of teachers and heads who are allowed to keep their jobs despite carrying out crimes while in their post. 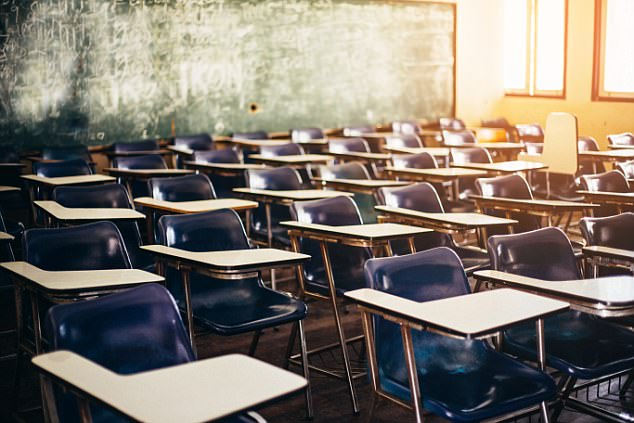 The figures mean there could be thousands of convicts working as teachers, classroom assistants, or even headteachers

The applications, revealed by the Disclosure and Barring Authority, include attempts to fill vacancies for headteachers, heads of year and even school yoga teachers.

Former Liberal Democrat leader Tim Farron said: ‘It’s astonishing how many offenders are applying to work in our schools. Parents have to feel secure that the people they leave their kids with for six hours a day can be trusted to set an example about what is wrong and what is right.’

Tory MP Priti Patel has previously questioned the lack of transparency and said that ‘parents have the right to know’ who is teaching their children. A Department for Education spokesman said there were ‘robust safeguards in place’ to protect children in schools, including checks against barred lists, adding: ‘We trust schools to use the results from those checks when deciding whether to employ an individual.’