Once a cult Italian chain where desperate diners would queue outside for a chance to grab a table, the downfall of Criniti’s has been swift and severe as the new owner is accused of posting five-star reviews to boost its ailing reputation.

Frank Criniti and his wife Rima founded the chain in Parramatta, in Sydney’s west, in 2003 when they were both 23.

One franchise even offered a complimentary shuttle service to nearby ferries in a Rolls-Royce.

But a messy divorce between the couple saw business-savvy Rima leave Criniti’s completely.

Frank managed to hold on to the chain until 2019 before more than $16.5million worth of debt caught up with him.

Seven Criniti’s locations were eventually bought by Raj Patel and his Brunelli Group for just $1million in November 2019, finally reopening in August 2022 after the end of the Covid pandemic. 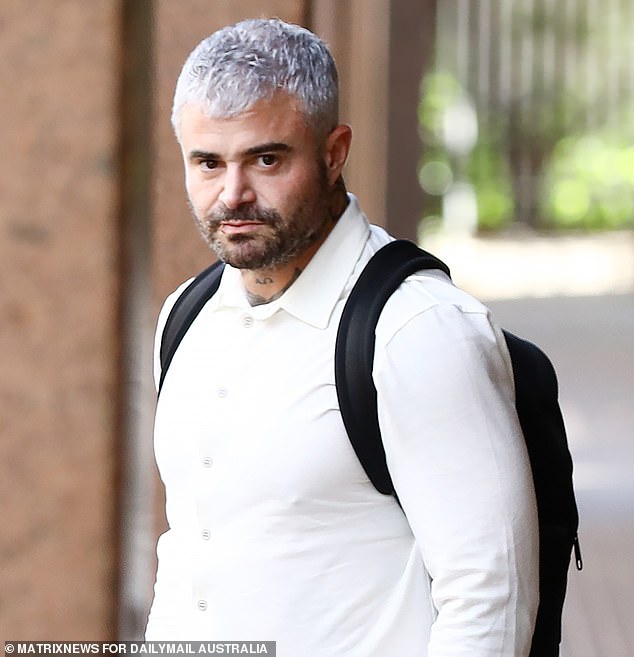 Frank Criniti (above) handed over ownership of the business after accumulating more than $16.5million in debt and was banned from managing another business until 2023 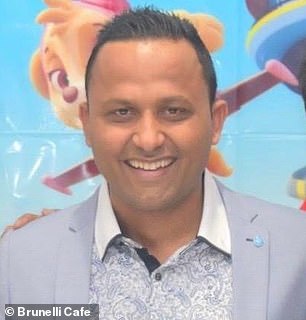 Raj Patel (above) and his Brunelli Group bought seven Criniti’s locations for just $1million in November, 2019

Patel bought the struggling family-owned chain after it went into administration and was forced to close seven of its 13 stores in New South Wales and Victoria.

But its reopening, to much fanfare, has been plagued by poor reviews with long-time fans claiming the food and service has gone downhill.

Hundreds of reviews left by disappointed customers called the food, service and conditions of the stores ‘disgusting’ and nothing like the ‘old days’.

Other long-term customers complained the prices had skyrocketed while the quality worsened and portions shrunk.

‘I would give 0 (stars) if I could. This place is an absolute disgrace. The food is microwaved frozen food, the staff looks like they are moping zombies, the cocktails were good though,’ one person wrote.

‘We ordered a garlic and prawn pizza. Little did we know that we have to cut the garlic ourselves.

‘Avoid this place, there are such nice restaurant in Sydney. Criniti’s is not one of them.’ 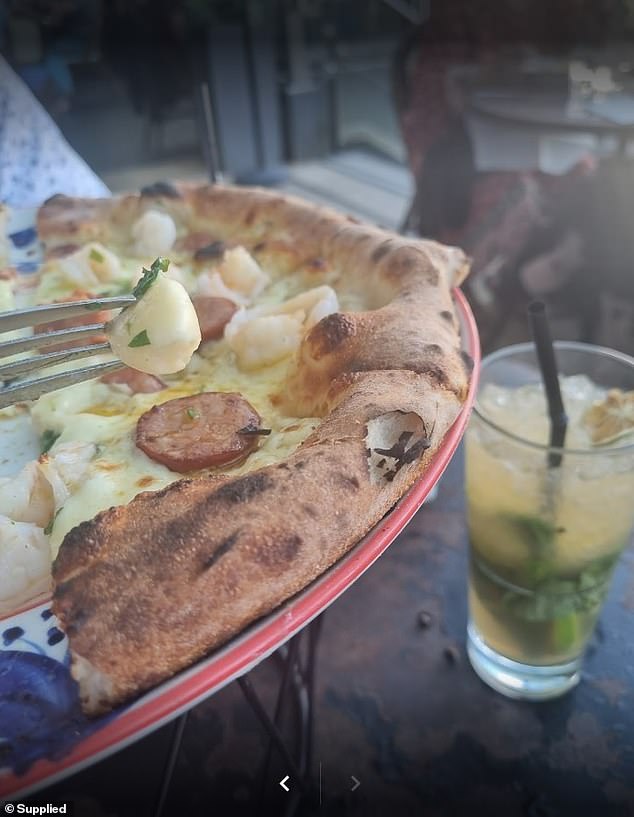 ‘I’m not sure what makes Critini’s such a beacon to eat at? It certainly is all show,’ he wrote.

‘It’s a shame the Sydney residents think this place is worth eating at, as indicated by the people lining up falsely waiting for a table when it wasn’t busy, and dressed up like they are going to a nightclub???

‘Once sat down, I couldn’t even get my head wrapped around the very busy menu, it took great strength again to block out the distracting loud music to even read the menu … there is no table service, we consistently had to call staff over, again, I don’t care where you are, Sydney restaurants are really dropping the ball… it’s basic hospo. 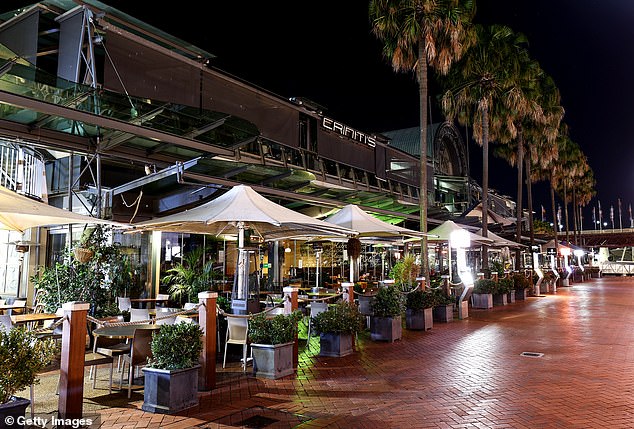 ‘On the way out to paying, which you need to get the bill yourself, was given the absolute rough experience, as he couldn’t understand me and I couldn’t hear a damn word they were saying.

‘Summary: I thought I was at a night club, the menu is an IKEA instruction pamphlet, don’t eat for a week you might finish your meals and being a tourist from interstate who doesn’t sniff the Sydney air, Darling Harbour has lost perspective on basic hospitality skills, seems to only be surviving on tourists.’

The brand’s ratings were plummeting until last month when customers noticed a flood of recent five-star reviews.

A viral video on TikTok showed dozens of reviews left by Google accounts, with some even repeating the same spelling mistake several times.

The video accused the brand of buying the positive reviews to help boost its score on Google.

Criniti’s account, which was tagged in the video, responded by blocking the poster.

Many of the reviews have been deleted since the video was uploaded, including one from a ‘Raj Patel’, the same name as the person who bought the Criniti’s chain in 2019. 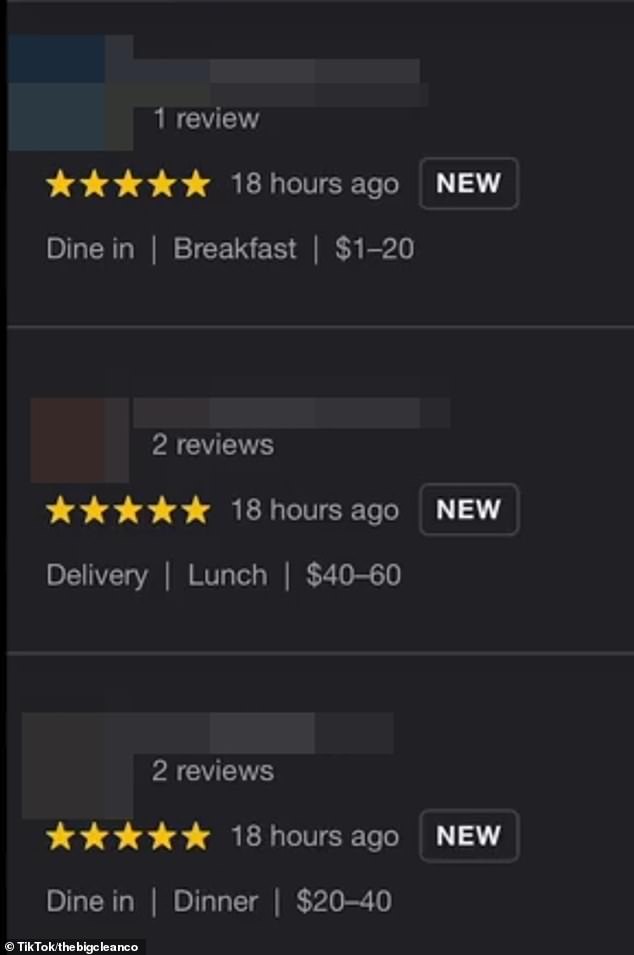 Criniti’s careers manager Kathy Criniti vehemently denied the restaurant was using bots to lift Google ratings and said its poor reviews were only a reflection of some customers’ experience.

‘With 30,000 covers being booked each week and this number increasing, it’s inevitable that there may be a few (poor) feedbacks here and there,’ she told Daily Mail Australia.

‘Especially in an era of reviews and social presence, where we depend on Google reviews as consumers.

‘Criniti’s’ popularity hasn’t wavered nor our presence and viability in hospitality, so with that said our growing numbers are evidence of positivity and as a group we cannot continue to grow without the feedback, be it positive or negative.’

Former co-founder Rima Criniti said she had continued to dine at the stores but was ’embarrassed’ to be associated with what the once-iconic brand has become. 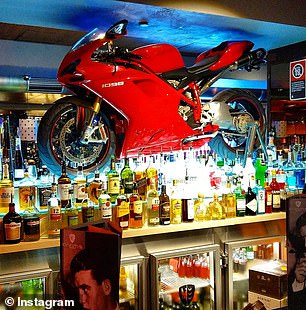 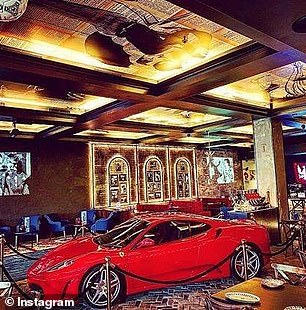 ‘It hurt so much to see the business close but when somebody stepped in to give it life, I was like “wow”,’ she told the Daily Telegraph in September.

‘I’d lost it, yes, but I wanted someone to make me proud of what Frank and I had created.’

Ms Criniti is now working on building another business while her ex-husband has a year left on a five-year management ban after seven more of his companies went under.

Lots of reviews highlight good service and the location’s great view but say the food could be better. Recent reviewers said their meals were ‘greasy’, overpriced and took to long to be served.

Recent reviews say the food is overpriced and sub-par. Several reviews were from former Criniti’s fans who said they were ‘disappointed’ with the new owner’s quality.

The Criniti’s flagship store has copped the harshest criticism of all. Customers slam the hygiene, ‘disgusting’ food and poor service, noting staff look like ‘don’t want to be there’.

This Criniti’s is evenly matched with lovers and haters. Many people tout the restaurant’s great atmosphere and family/group-friendly setting. Most of the negative comments blame ‘bad service’ for their experience.

Most of the restaurant’s recent reviews are positive and note delicious food and friendly staff as two selling points.

This restaurant appears to be a fan favourite with many raving about the food and service. However, negative comments say the meals aren’t worth the hefty price.

Many customers say the location is the highlight of this Criniti’s with the service and food lacking. One person called their experience ‘deplorable’ while many said the waiters were too ‘slow’.

Many people applauded the food at this Criniti’s but slammed ‘horrendous’ service. One customer wrote: ‘Why go to Karen’s Diner when you can go to Criniti’s Newcastle?!’

This store has received mostly positive reviews for the last month with many saying the store offers delicious food and a great space for groups. The only criticism is that the food is overpriced.