Cristiano Ronaldo speaks out after reports he wanted to WALK OUT on the World Cup, hailing Portugal as ‘a group too close to be broken by outside forces’

Cristiano Ronaldo has ranted on social media after speculation that he wanted to leave Portugal’s World Cup camp – insisting the squad are ‘too strong to be broken by outside forces’.

The forward has dominated much of Portugal’s World Cup camp amid his bitter exit from Manchester United before getting into hot water with his national team over attitude and performance issues.

He has scored just once in Qatar and irked his manager Fernando Santos by sulking after being withdrawn in their 2-1 loss to South Korea. And when he was dropped by his coach for their last-16 clash against Switzerland – which they won 6-1 – he is said to have threatened to fly home.

But Portugal later hit out at the rumours, saying Ronaldo ‘builds up a unique track record every day at the service of the national team and the country, which must be respected and which attests to the unquestionable degree of commitment to the national team.’ 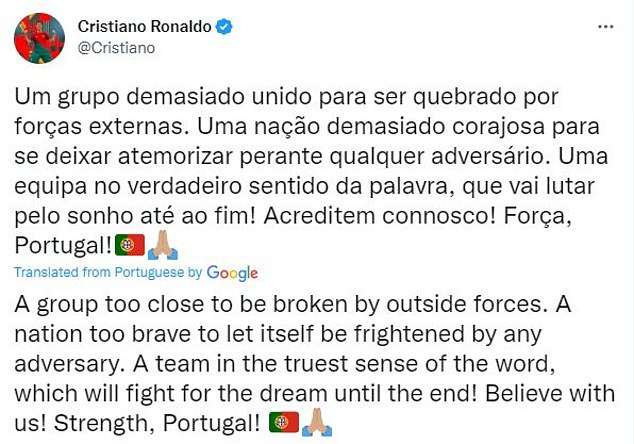 Now the 37-year-old has broken his silence since the reports emerged, insisting Portugal were too ‘close’ and ‘brave’ to be affected by outside noise.

In a tweet, the forward wrote: ‘A group too close to be broken by outside forces. A nation too brave to let itself be frightened by any adversary.

‘A team in the truest sense of the word, which will fight for the dream until the end! Believe with us! Strength, Portugal!’

Ronaldo has sought to ease tensions between himself and Santos after the coach expressed his fury at the player for his behaviour when coming off against South Korea. 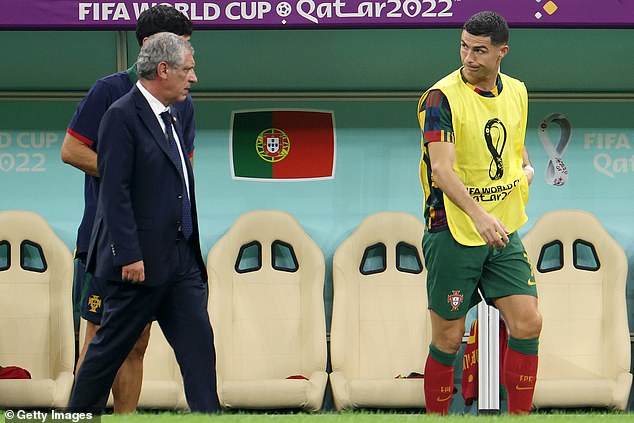 ‘Everything is finished, full stop, regarding that issue and now we have to think about the match and everyone is focused on the match.

‘I only decide who is going to be the captain when I reach the stadium so I don’t know the line-up. 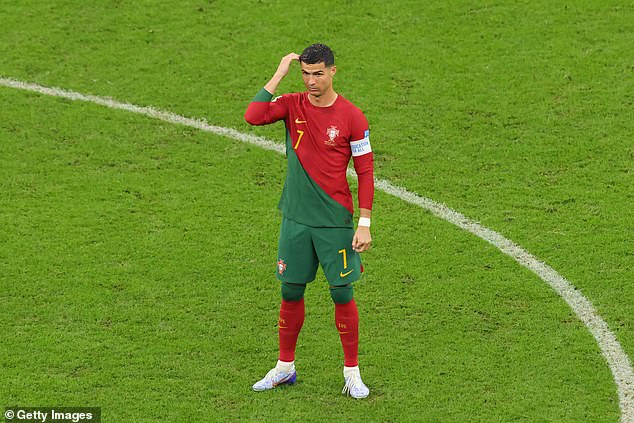 Ronaldo then added to the row by walking off alone after Portugal’s win over Switzerland – while the rest of his team-mates were celebrating the romp – before he posted on Twitter hailing the team’s display and praising the selection of his manager.

‘Amazing day for Portugal, with a historic result in the biggest event in world football,’ he wrote.

‘Luxury display of a team full of talent and youth. Our Selection is to be congratulated. The dream is alive! To the end! Go ahead, Portugal!’