Crown Princess Mary of Denmark looked effortlessly stylish as she sat courtside at a NBL match on Boxing Day.

The Australian-born royal, 50, has been spending Christmas with her family in her home Tasmania.

The mother-of-four was spotted with her husband Prince Frederik at the match between Tasmania JackJumpers and New Zealand Breakers at MyState Bank Arena in Hobart.

Sporting a JackJumpers scarf over a chic white blazer, she enthusiastically cheered the team on to their first point chanting ‘March, march, march’ with the crowd from a corporate box.

She kept her brown tresses loose and opted for statement gold hoops and bangles, whilst holding on to a Jackjumpers hand clopper noisemaker.

The royal couple were pictured deep in conversation during the round 12 NBL game, where Prince Frederik opted for a loud patterned black jack, with splashes and khaki and red.

The Princess is enjoying a summer holiday in Tasmania with her Hobart-based family for the first time in five years.

She shared a family photo to Instagram on 23 December of her sat beaming next to her husband and their children Christian, 17, Isabella, 15 and twins Vincent and Josephine, 11, as they sat in front of an incredible view of Hobart. 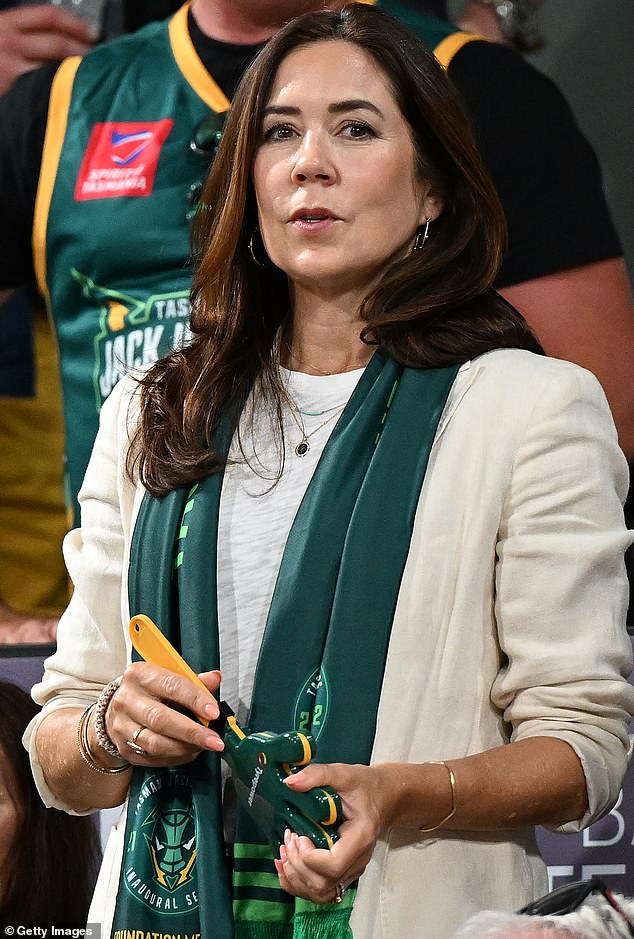 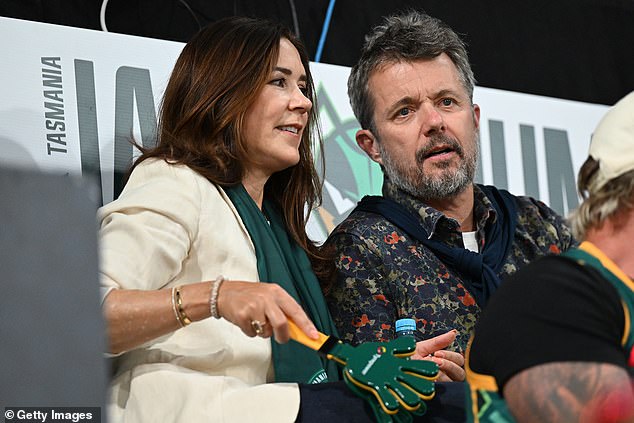 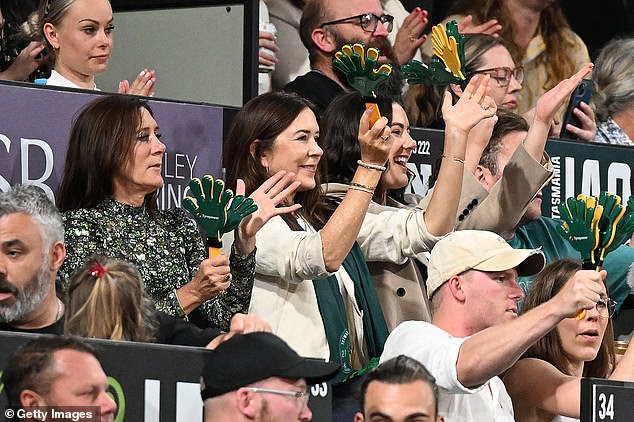 ‘Merry Christmas from “Down Under” – where we celebrate Christmas in Tasmania,’ the post read.

‘Here it is neither frostbite nor just trees but summer and warm weather.’

The Hobart-born royal looked stunning in a summery dress from Australian designer Zimmermann.

Princess Mary arrived at Hobart airport alone on morning of the 22nd December and has been spending Christmas in Tasmania with her immediate and extended family.

It is understood the family have been staying at Government House in Hobart – as they did on their previous visit – and spent Christmas Day with Mary’s family. 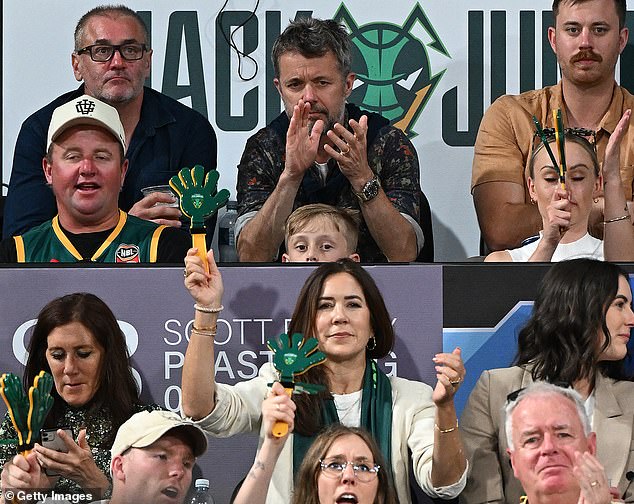 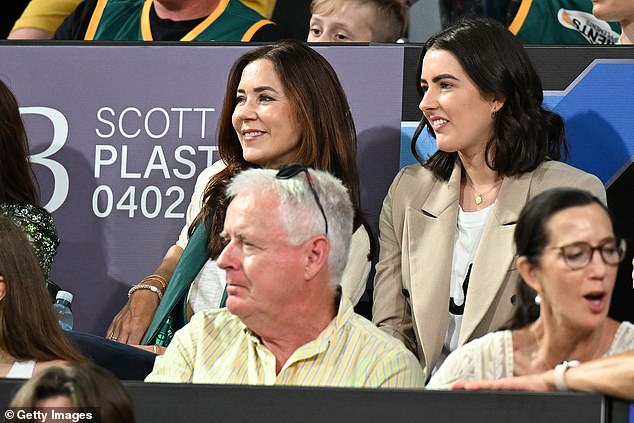 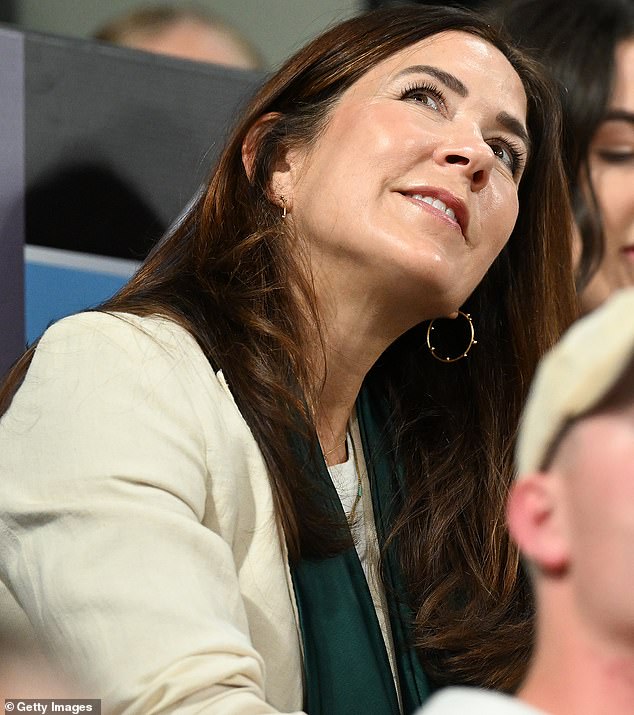 Mary kept her brown tresses loose, showing off her statement gold earrings. While her makeup was natural 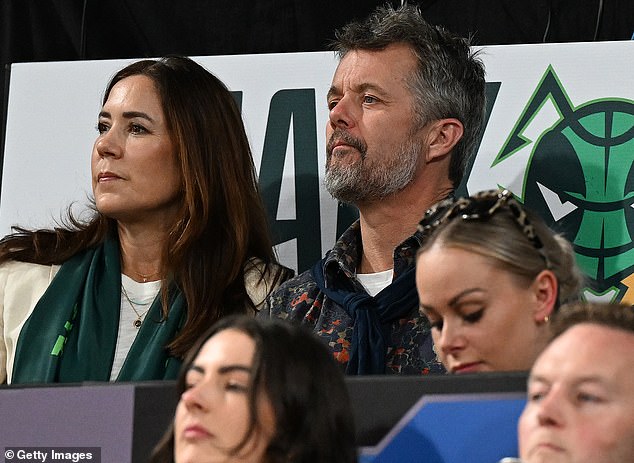 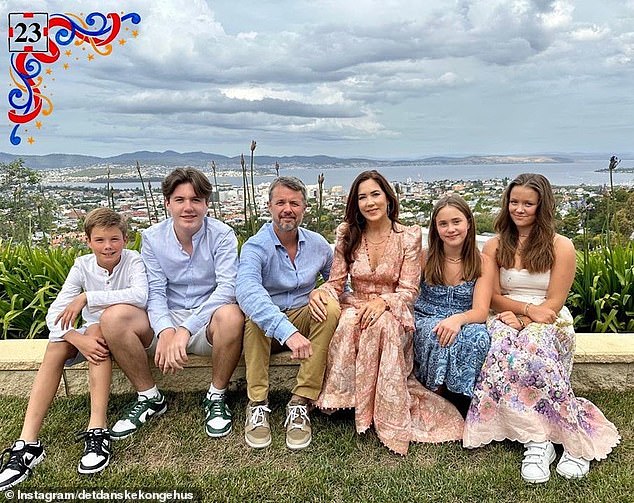 The visit to Australia is a private trip, which means the Princess and Prince are not in the country in an official capacity and have no public events scheduled for their stay.

A statement from the royal household read: ‘In December, the Crown Prince’s family will travel on a private Christmas holiday in Australia to celebrate the holiday with HRH the Crown Princess’s family.

Since marrying Prince Frederik in 2004, the Princess has been on four royal visits to Australia but has visited her home country at least nine times.

From beach babe to airport chic! Crown Princess Mary of Denmark swaps olive swimsuit for a tailored blazer as she takes a commercial flight to her home state of Tasmania