The game was up once Ruben Dias acted the overlapping left back and planted a deep cross straight into the arms of Vicente Guaita. Everybody sighed. Dias genuinely believes he can do everything but the idea of him fashioning an equaliser from that area of the pitch was nonsensical.

That Dias found himself out there at all spoke to a frenzied, confused Manchester City and when they do lose, they lose rather dramatically.

Pep Guardiola will fear the implications of this result on their title defence, now five points behind Chelsea, with his only consolation that Liverpool also dropped home points on a mad afternoon. 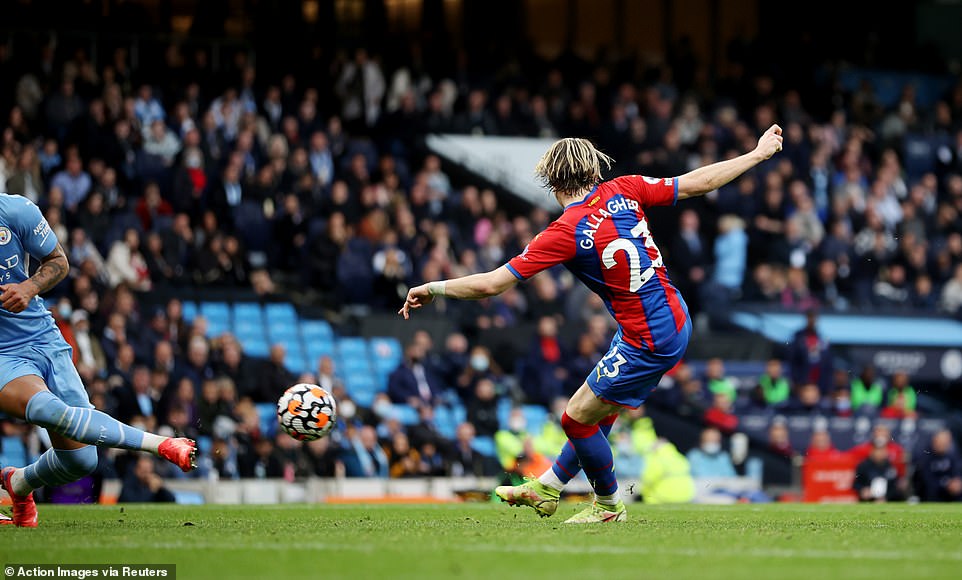 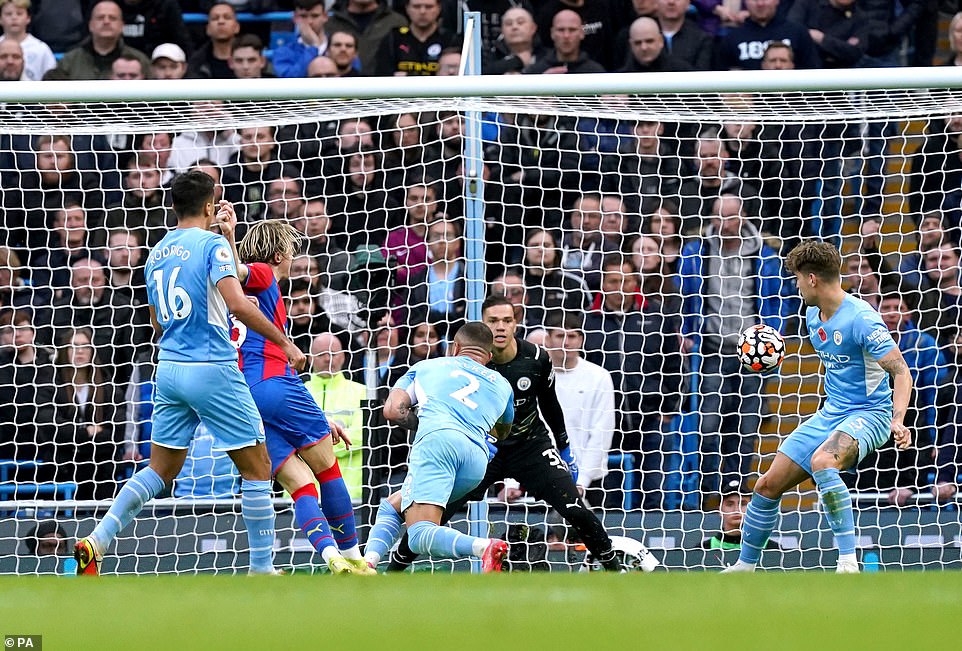 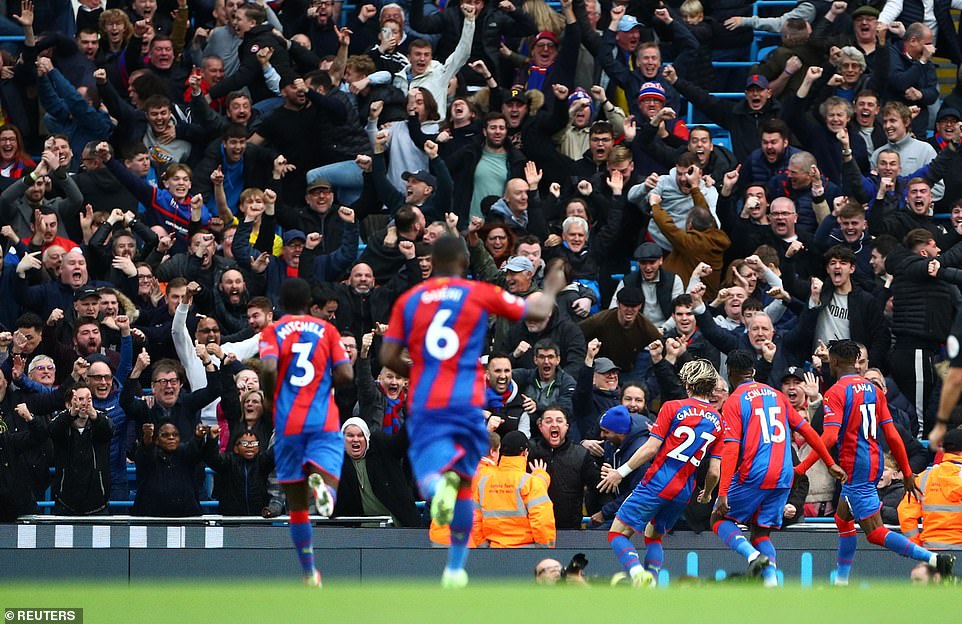 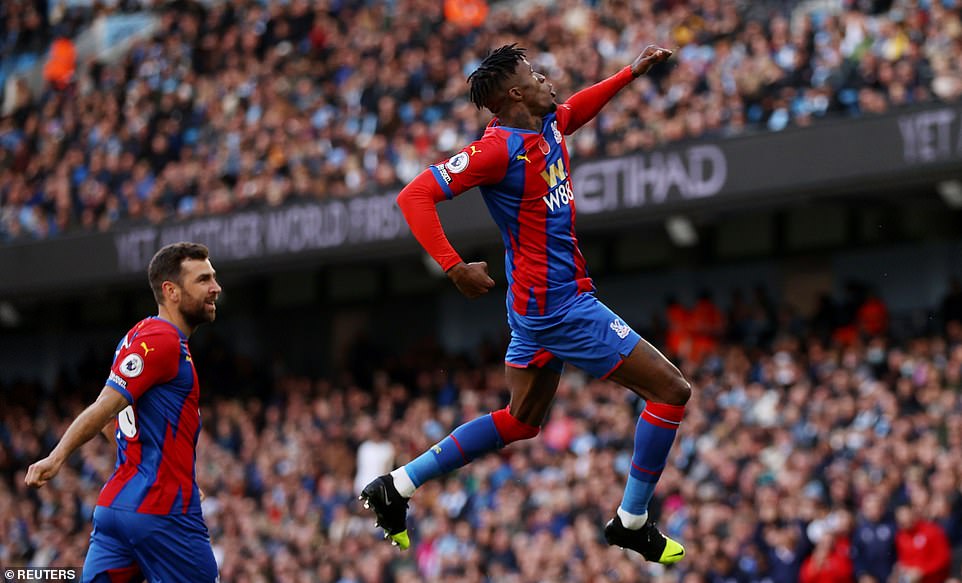 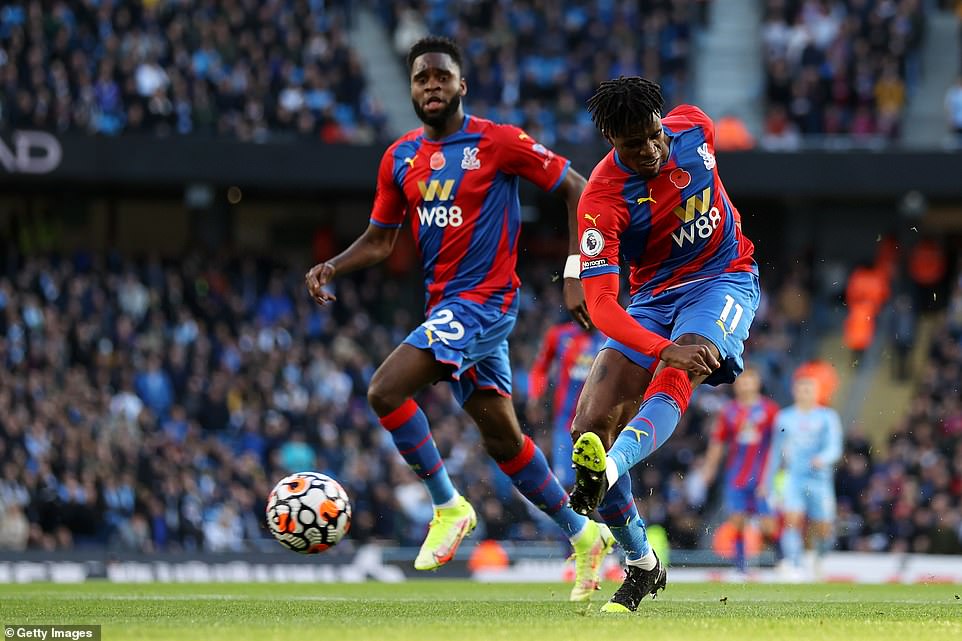 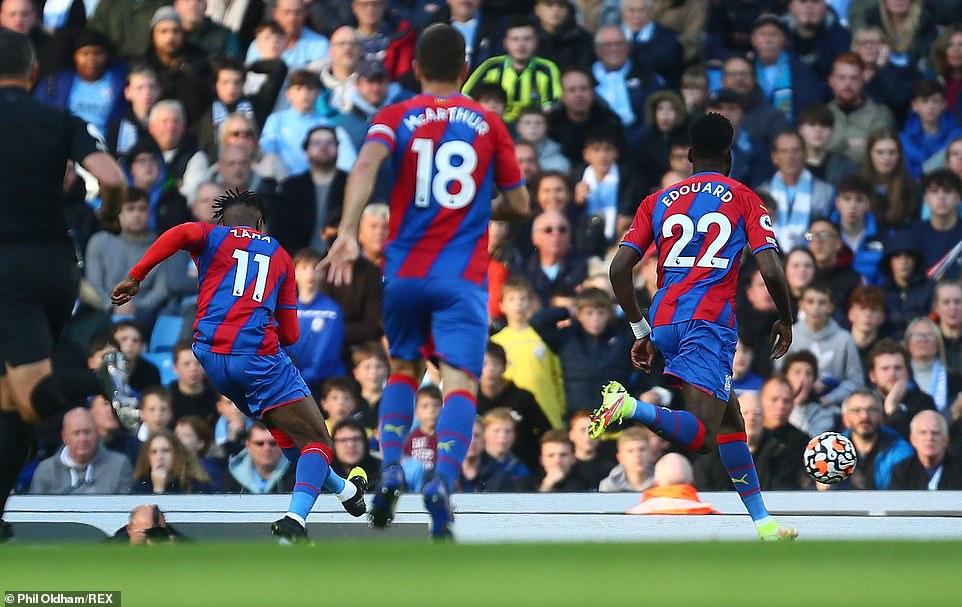 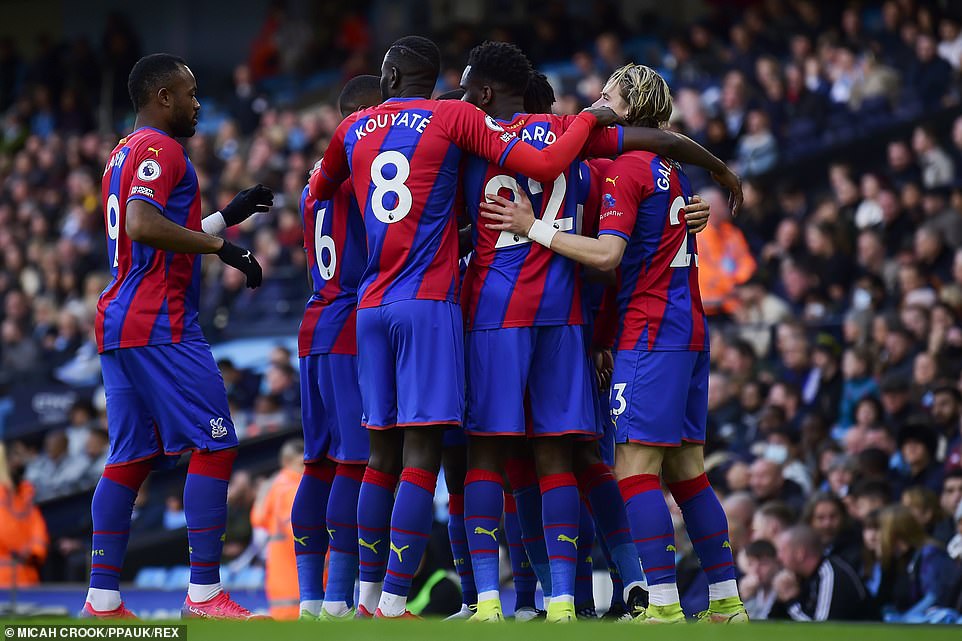 Here came the sixth game in which City have failed to score this season, over a third of their fixtures – numbers almost unheard of. They either score loads or none, but Crystal Palace deserved this, excellently drilled by Patrick Vieira, a manager once tipped to eventually take the top job at the Etihad Stadium.

No fluke, either. Vieira perfected the sort of game plan that has seen City undone by a few others at this ground in recent seasons. Notably Palace three years ago. Staying narrow, nicking the occasional ball in midfield, breaking with searing pace. Vieira has the individuals to do this.

So there was no surprise when Conor Gallagher swept home their second two minutes from time. Wilfried Zaha had given them an early lead and Palace held it resolutely, then breaking with the game stretched.

Even before the first-half red card, one of Aymeric Laporte’s own making, City were messy.

The usual problems when things aren’t going their way: too many looping crosses, too much rushing when presented with the tightest of space against compact opposition.

None of that is particularly new. Guardiola’s team losing their composure so spectacularly is though, and proof that Palace were under their skin.

Guardiola became incensed with the performance of Andre Marriner, his players too.

Zaha wound some of them up, particularly Ederson and Bernardo Silva after Laporte’s sending off seconds before half-time.

Zaha, at the centre of everything, had been the one who gave the visitors something to cling to but Laporte was culpable.

Palace wanted to cut off supply into Rodri and with his primary option closed off six minutes in, Laporte checked back on himself 30 yards from his own goal.

The defender’s heavy touch was a trigger for the energetic Gallagher, whose fortitude saw him turn over possession and gallop clear.

Zaha had peeled off to the left, collected the pass, and sent a scruffy effort right into Ederson’s far corner, leaving the goalkeeper wondering whether he might have done better. With it, Zaha became the first Palace player to reach 50 top-flight goals. 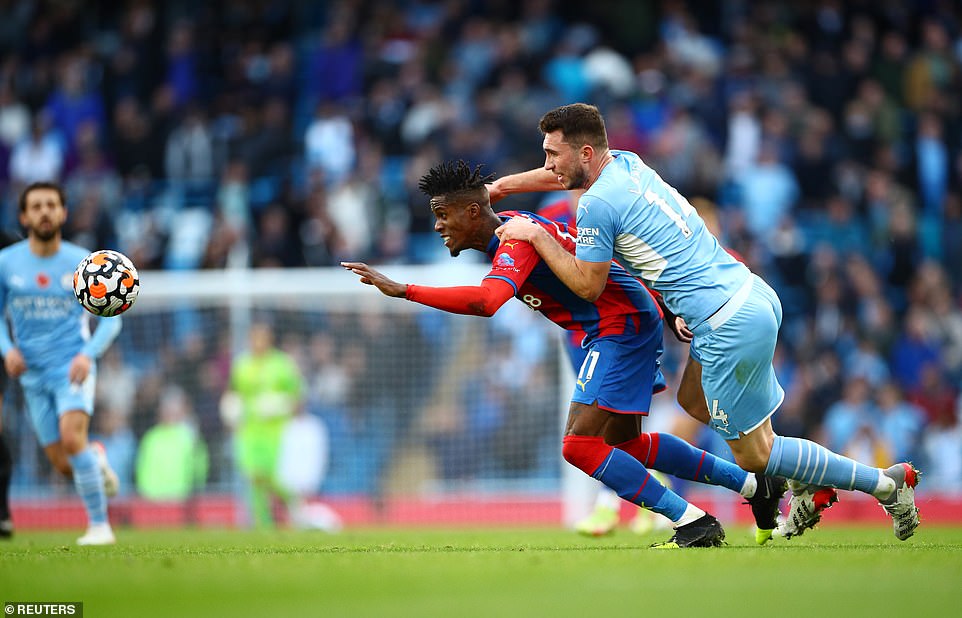 It got worse for City when Zaha turned Aymeric Laporte, who dragged Zaha down to prevent him running through on goal 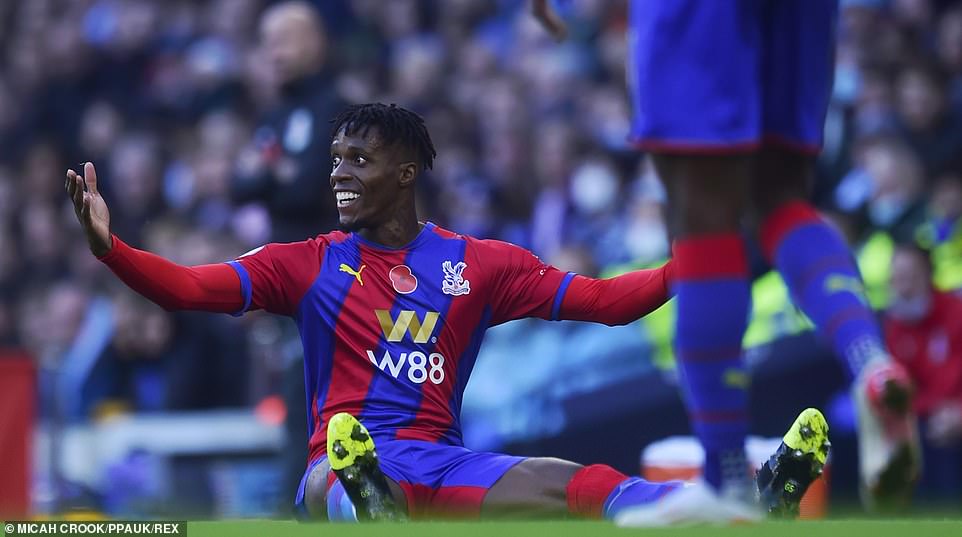 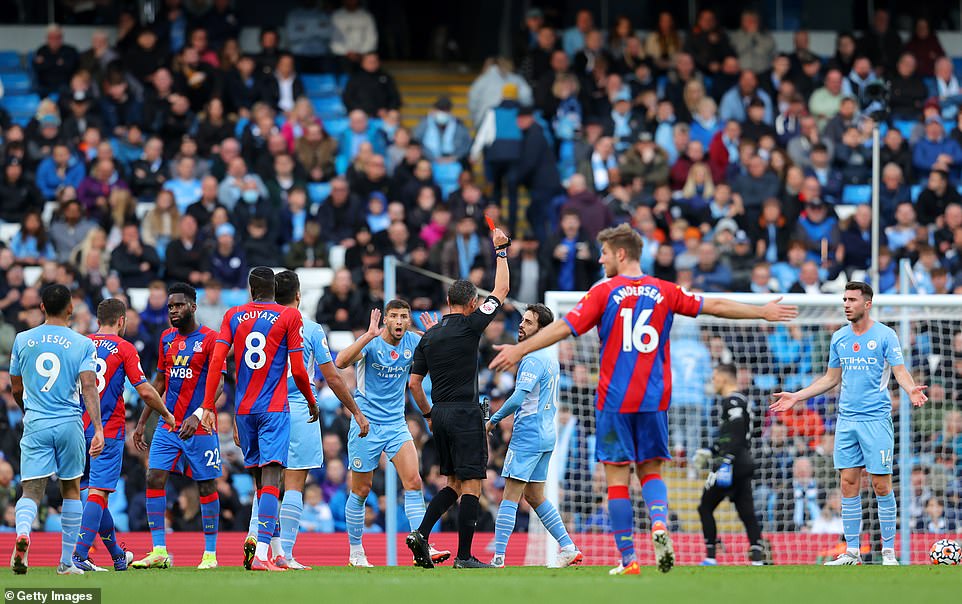 As a result, referee Andre Marriner reached for to his pocket and brandished a red card, sending Laporte off before half-time 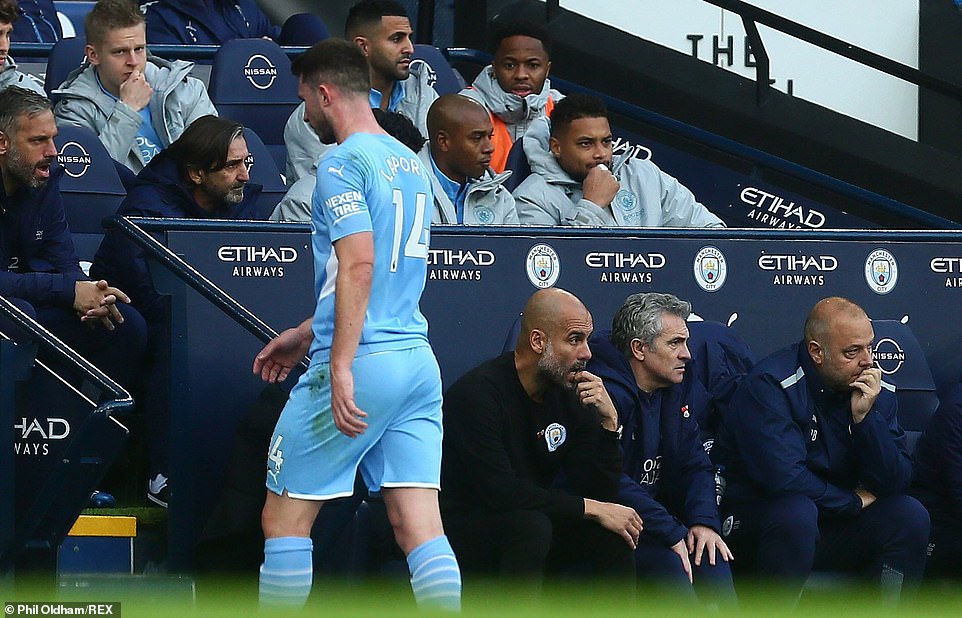 Laporte is given his marching orders, walking past Pep Guardiola who now only had 10 men for the rest of the match

Given it was so early, City need not have panicked. But they did.

Joao Cancelo shot from anywhere, crosses pumped into a non-existent target man. Silva inexplicably and unusually passed one ball straight out of play, splitting his own men. Even Phil Foden was giving the ball away.

City’s only proper chance of note before half-time came when Rodri slammed a shot straight at Guaita on the turn, while the Palace keeper infuriated the home crowd with apparent time-wasting at restarts from the 25th minute. He was booked for that an hour later.

Needle existed long before Laporte headed for the tunnel seconds shy of the break. 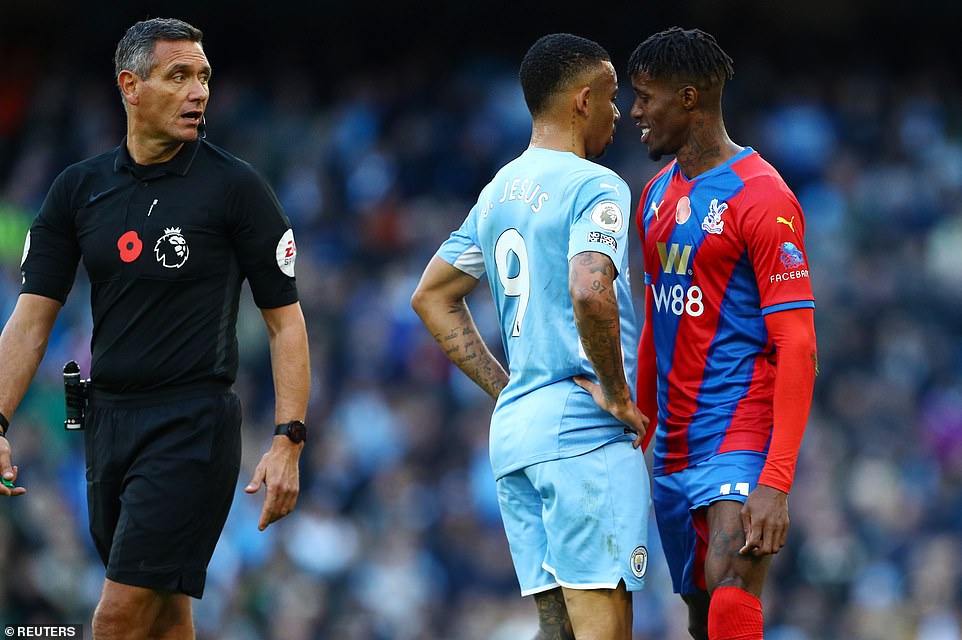 Tempers began to fray before the half-time whistle, as Zaha (right) and Gabriel Jesus (centre) squared up to one another 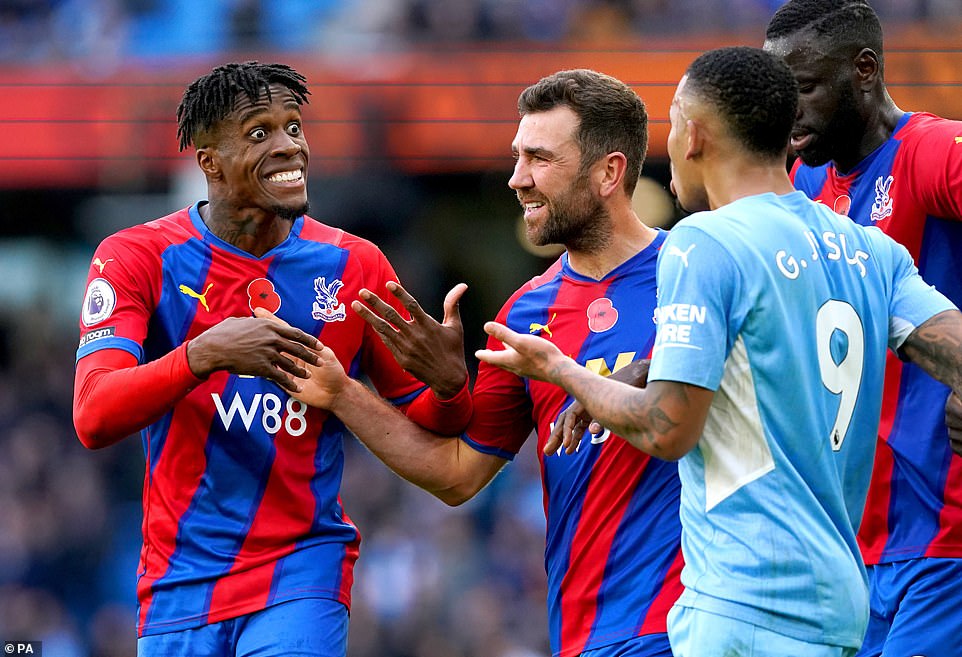 The sense of agitation fed into the idea that Guardiola’s champions were hectic in their hunt for parity. That boiled over when Zaha went to ground clean through.

Laporte had dived in and left himself too much to do as the forward raced free, dragging him back as last man. City argued for what felt hours over Marriner’s decision, Dias later labelling it ‘strange’. His manager added: ‘We didn’t lose because of that.’

Guardiola introduced John Stones, reverting to a back three – Cancelo pushed to midfield – and there was a brief liveliness.

A 50-yard Stones clip to Foden opened Palace up, Jesus finishing off the youngster’s careful cross at the back post only for VAR to disallow it for offside.

Jesus had earlier gone close, Andre Ayew skewing wide on the counter. City went into the final 20 minutes behind yet with renewed vigour to squeeze something from this. They never capitalised on the change in mood, however, and Gallagher finished off a swift counter that drew heated confrontations between home fans in the Colin Bell Stand and the celebrating Palace analysts sat behind them. Those arguments were in keeping with the day. 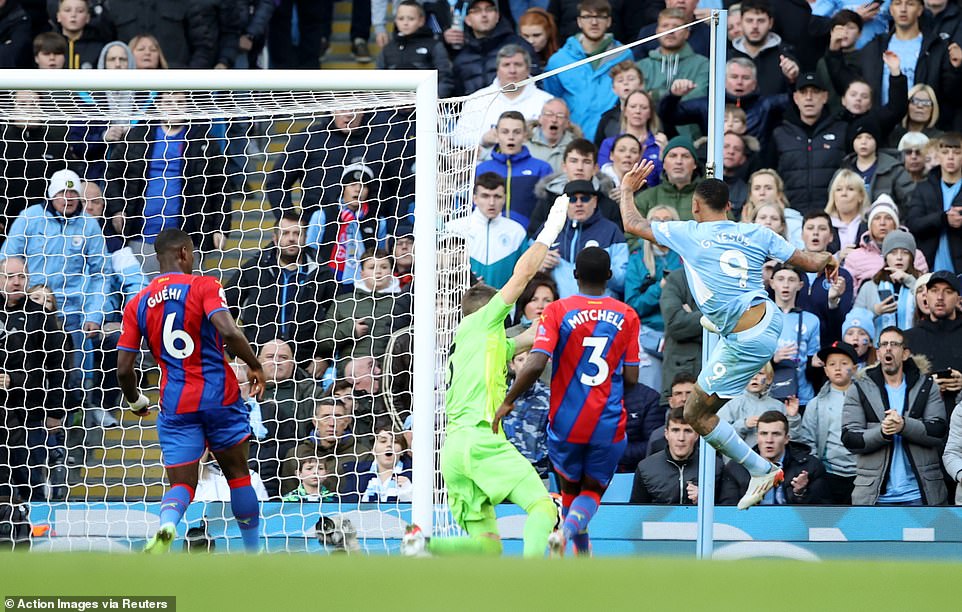 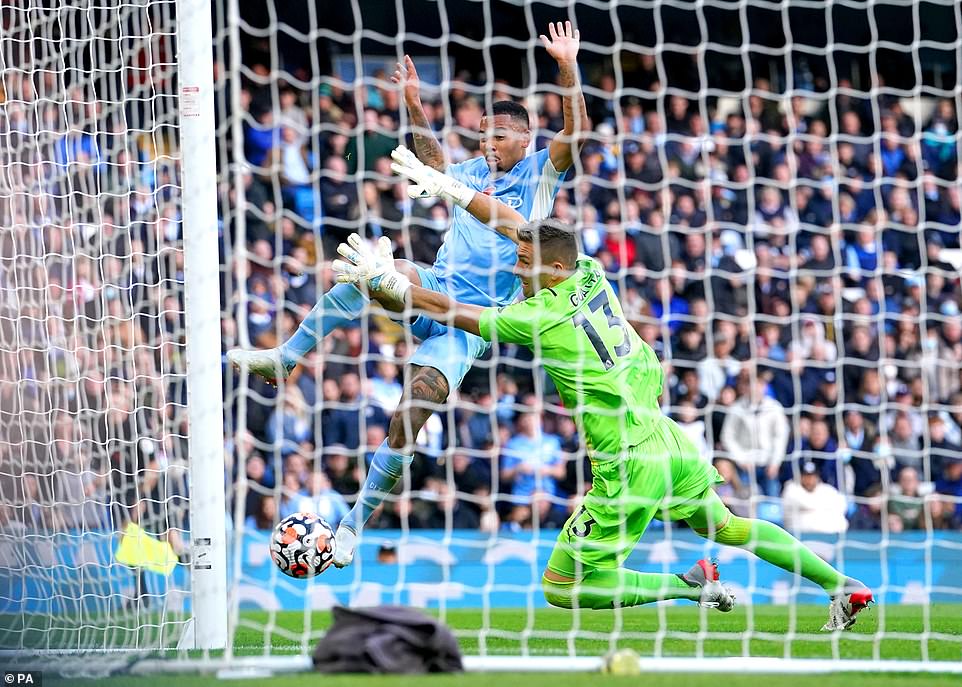 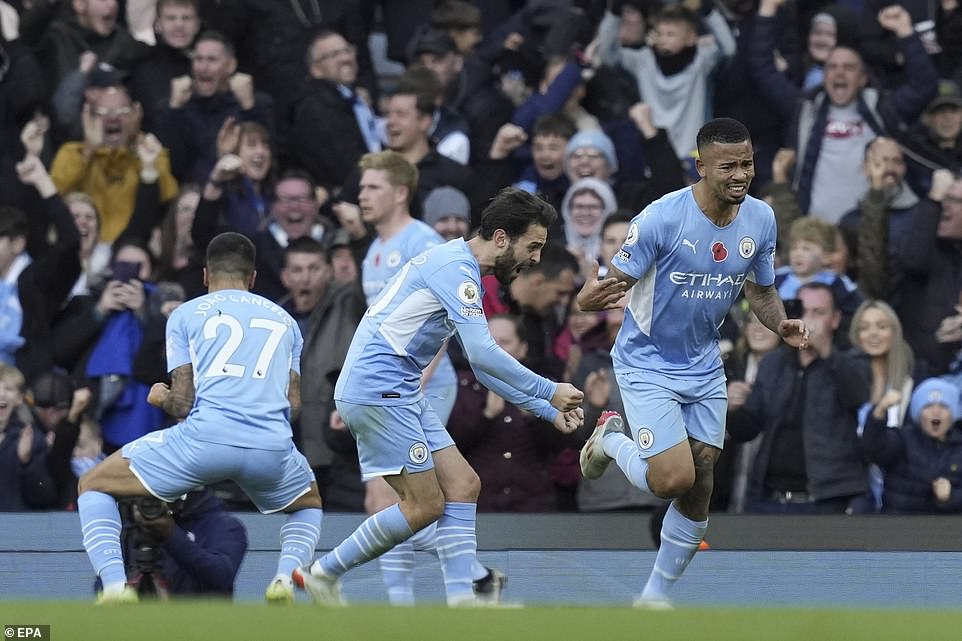 Jesus (right), Joao Cancelo (left) and Bernardo Silva (centre) celebrate the equaliser before it was soon ruled out by VAR 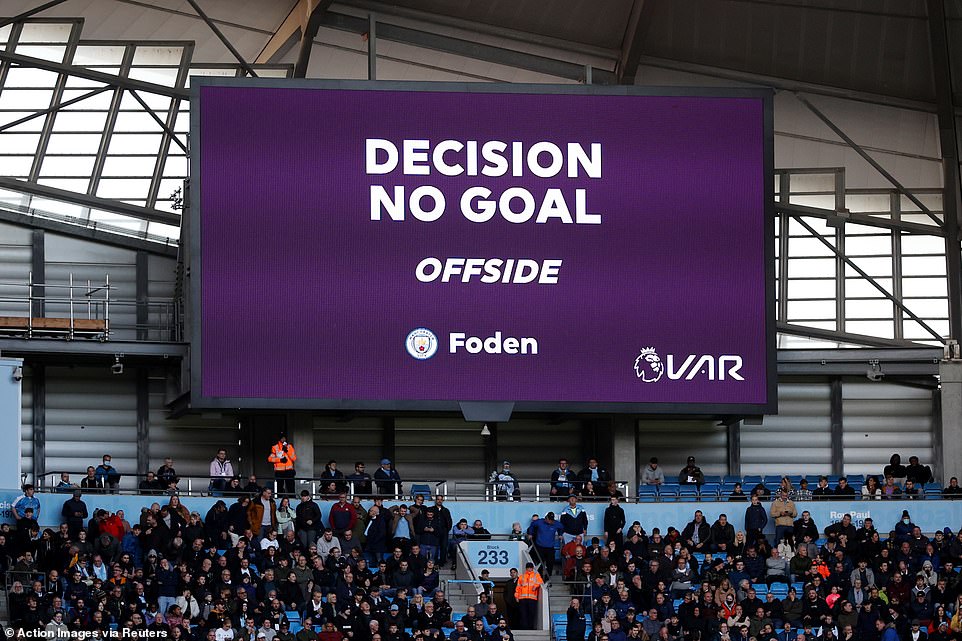