Thousands of anti-Cuban regime protesters gathered outside the White House Sunday and stayed overnight into Monday to pressure Joe Biden to do more to address socialist Miguel Díaz-Canel’s actions against the people of Cuba.

The group stayed into the night for a planned candlelight vigil at midnight to mark the 26th of July Movement, a Cuban national holiday commemorating the 1953 attack when Fidel Castro led his first attempt to overthrow then-Cuban dictator Fulgencio Batista.

‘I’m 27 and I never thought I would live to see something like this,’ Alex Perez, a Florida resident who came to the United States from Cuba seven years ago, told the Miami Herald as he joined the protest in Washington,D.C.

‘We need to make sure there’s pressure for people who didn’t have to go through what I went through to know what’s going on in Cuba,’ he added.

More arrived in D.C. in the early morning hours of Monday and immediately headed to the White HOuse to join the protest.

Anti-Cuban government protesters held a candlelight vigil outside the White House overnight to mark the 26th of July Movement as thousands showed up in Washington D.C. over the weekend to demand President Joe Biden take action in Cuba 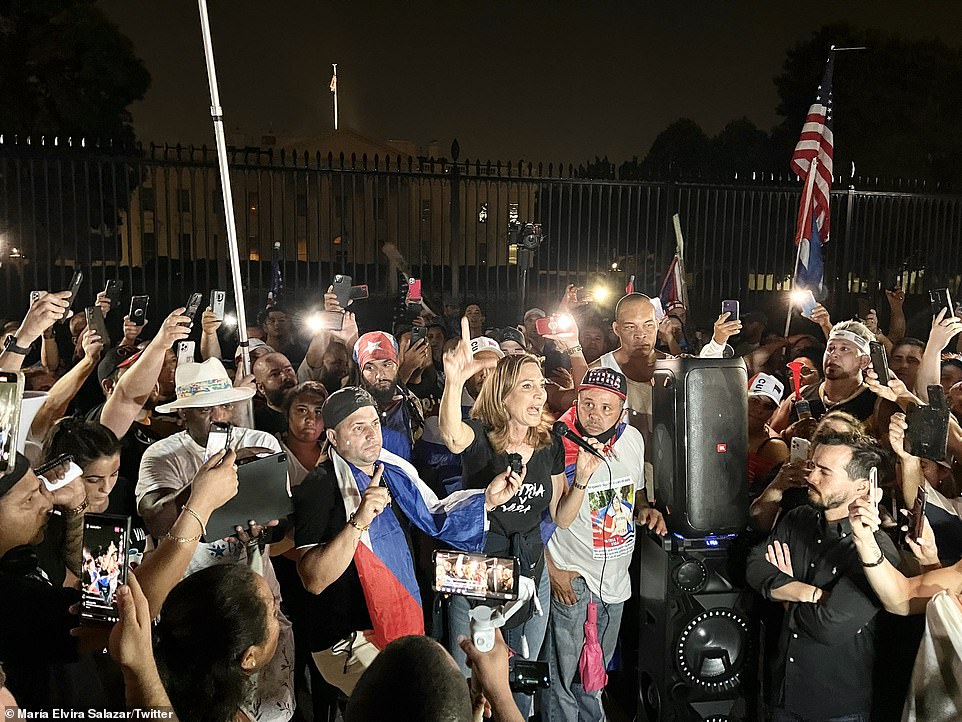 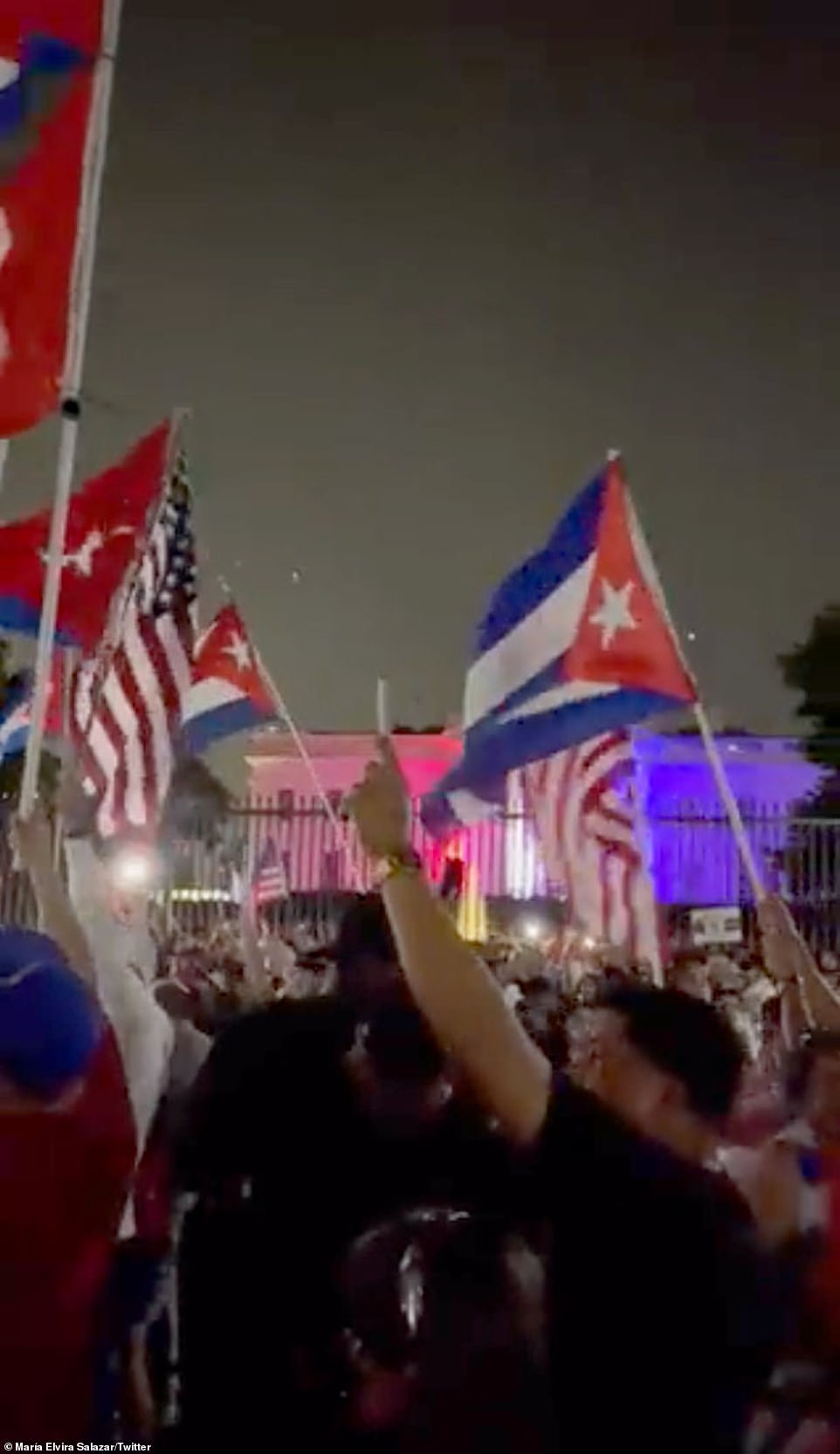 Protesters holding Cuban and American flags held demonstrations into the night in front of the White House, which is lit up red, white and blue to celebrate the U.S. Olympic Team 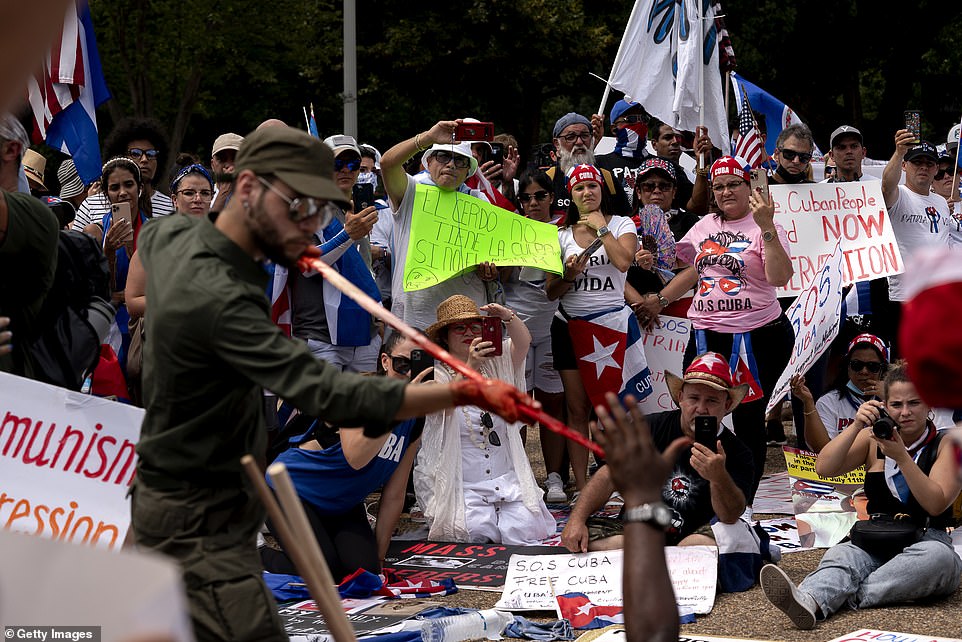 When asked what the message to President Biden is, Cuban-American protester Luis Luchuga Jr. told Fox & Friends: “Listen, we are here to send a loud and clear message and that is that the Cuban people need help. We need an intervention. We are here to let him know that we are fighting for our freedom.”

Luchuga, who has a Cuban flag draped over his shoulders and was joined by several other protesters in frame, fled from Cuba when he was 8-years-old.

“As you know, we’ve had a dictatorship for 62 years, a totalitarian regime that has stripped everything from the Cuban people, including their humility and their decency. Today they have no water, they have no electricity, they have no food,” he said.

He said the July 11 events have inspired ‘hope’ for the Cuban people, claiming it could go down in history as their ‘new independence day.’

Thousands more protesters are expected to arrive in the nation’s capital on Monday, according to Maria Fundora, who leads a Texas-based group called Cuba Libre that provides legal assistance to Cubans making asylum claims.

Fundora, 59, told the Herald that at least 18 buses left from Miami and only three had arrived in Washington by Sunday evening. She said caravans from Tampa and Texas are also on the way.

She advocated for military intervention in Cuba, and said Biden’s response to the protests in Cuba so far and said his inaction ‘guarantees a Trump 2024 ticket.’ 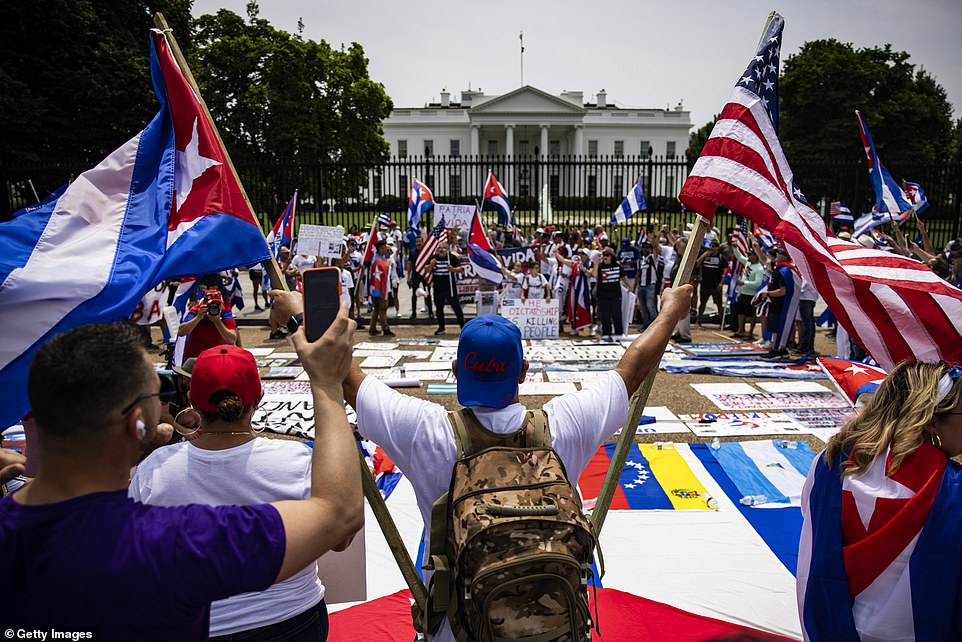 Protesters from around the country arrived in Washington, D.C. over the weekend to pressure Biden to do more following violent clashes between anti-government protesters and Cuba’s socialist regime 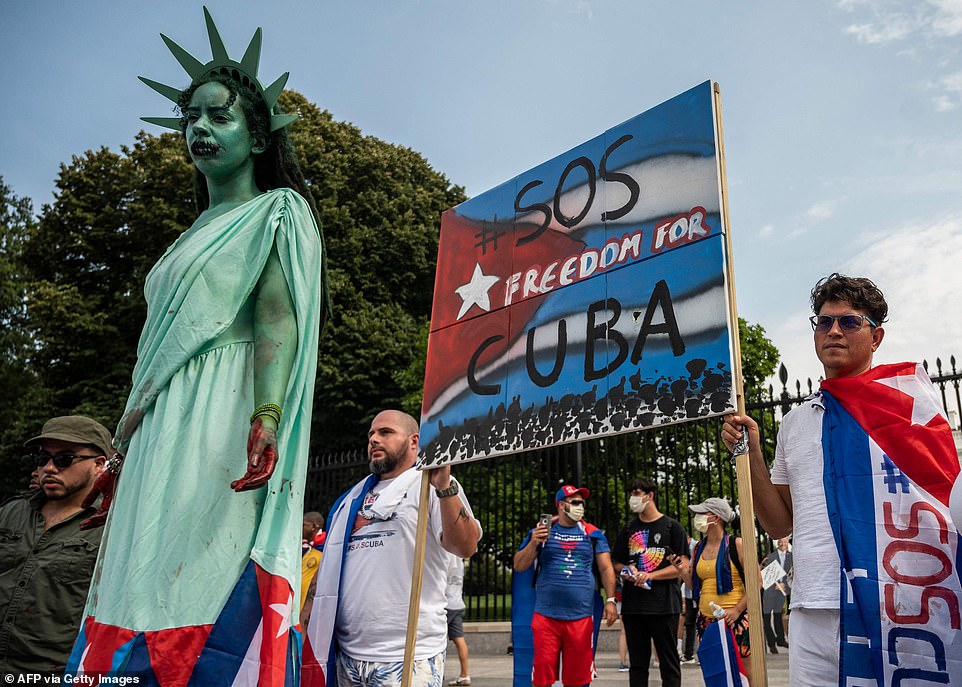 A woman painted green and dressed as the Statue of Liberty with bloody hands, a sewn-closed mouth and the Cuban flag at the bottom of her dress stands in protest outside the White House 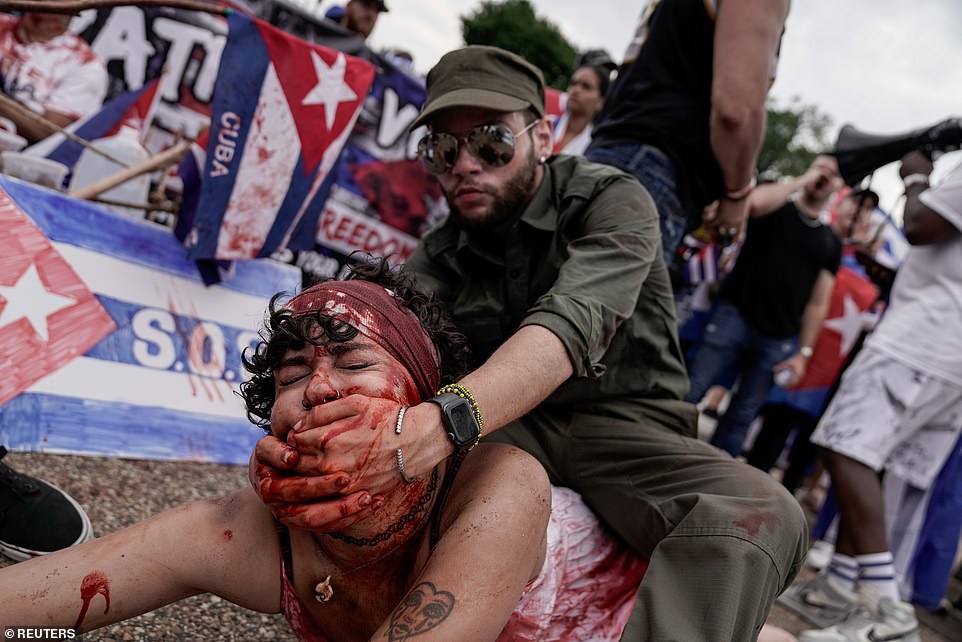 Two protesters engage in a dramatic demonstration of the violence between the Cuban people and it’s socialist government, which broke out earlier this month 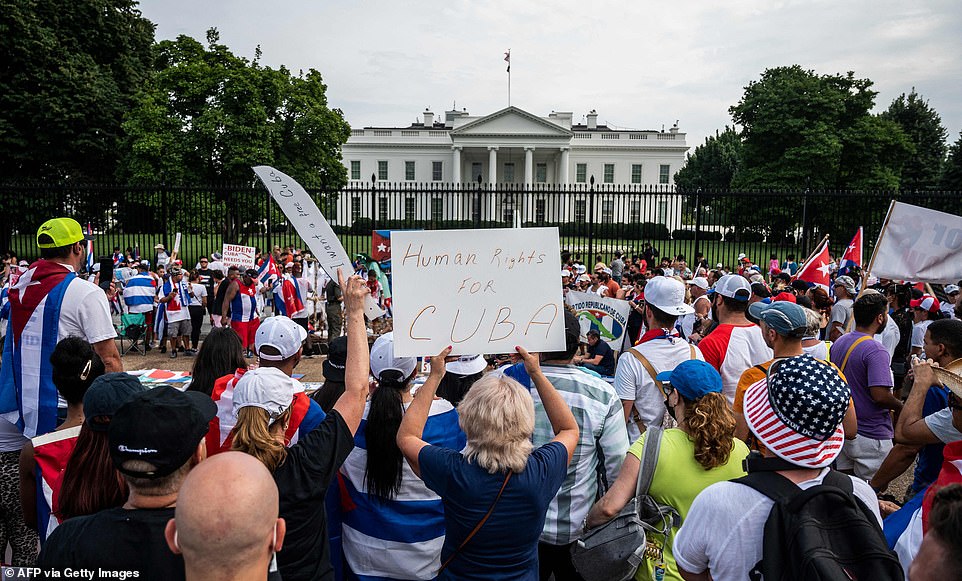 The protests come as Cuban-Americans claim Biden isn’t doing enough to push back against the island’s socialist regime violently retaliating to demonstrators earlier this month who marched in the streets in the midst of food, vaccine and medicine shortages in the pandemic.

Cuban authorities have arrested hundreds of demonstrators, activists and journalists after protests erupted on July 11 across the country amid an economic crisis, scarcity of basic goods, lack of freedoms – all happening around the COVID-19 pandemic.

As of July 14, one person was confirmed dead, but dissident group Cuban Decide estimates five were killed in the clashes. Hundreds of others reported injuries.

‘We saw a lot of people on I-95 with Cuban flags and messages on their cars,’ Chris Cruz, who was with Perez at the White House protest on Sunday, said. ‘Tomorrow is going to be intense but I know people will keep their cool.’

The Biden administration last week issued new sanctions on Cuba after outcry following the government’s violent response to island-wide protests regarding the regime’s handling of the reemerging COVID-19 crisis.

On Thursday, the Treasury Department blacklisted Defense Minister Alvaro Lopez Miera and the Black Berets, a Interior Ministry special police unit, following their role in the crackdown on protesters.

The move, however, does basically nothing considering in January the Trump administration already sanctioned Cuba’s entire Interior Ministry, including the Black Berets.

Cuba is also already under a trade embargo.

Experts have said the new sanctions will have little to no impact on assets held by Cuban security forces.

In response to these revelations, Florida Senator Marco Rubio, the son of Cuban immigrants, lambasted Biden’s sanctions as ‘meaningless.’

‘Biden sanctioning an already sanctioned regime official in Cuba is the kind of symbolic but meaningless measure we will continue to see as long as [he] is being advised by people who were drinking mojitos in Havana in 2015 to celebrate the Obama policy,’ Rubio tweeted on Friday.

As pressure mounts for the administration to do more, thousands of anti-Cuban government protesters from all over the country arrived in Washington, D.C. to post up outside the White House and demand action.

While the majority of protesters came up from Miami, and other parts of Florida, there were also travelers from Texas and New Jersey. Florida, due to its proximity to the island, has north of 1.5 million Cubans residing there, making it by far the state with the largest Cuban population.

The community is outraged over the injustice in Cuba, where the socialist, unitarian government is preventing its people from acquiring basic human needs like food and medicine.

In a statement last week, Biden said the new sanctions are just the start of his administration’s action on Cuba.

Jose Gabilondo, a law professor at Florida International University, said: ‘I think their goal is to appease part of Joe Biden’s would-be electorate because he did poorly in Florida.’

‘There were already a quite complex set of sanctions in place,’ he continued. ‘It’s kabuki politics.’

Before announcing the sanctions last week, a report revealed the administration is looking at other responses to the unrest, like bolstering U.S. presence at the embassy in Havana and making internet more accessible to citizens.

‘At President Biden’s direction, the United States is actively pursuing measures that will both support the Cuban people and hold the Cuban regime accountable,’ a senior administration official told the Herald last week. 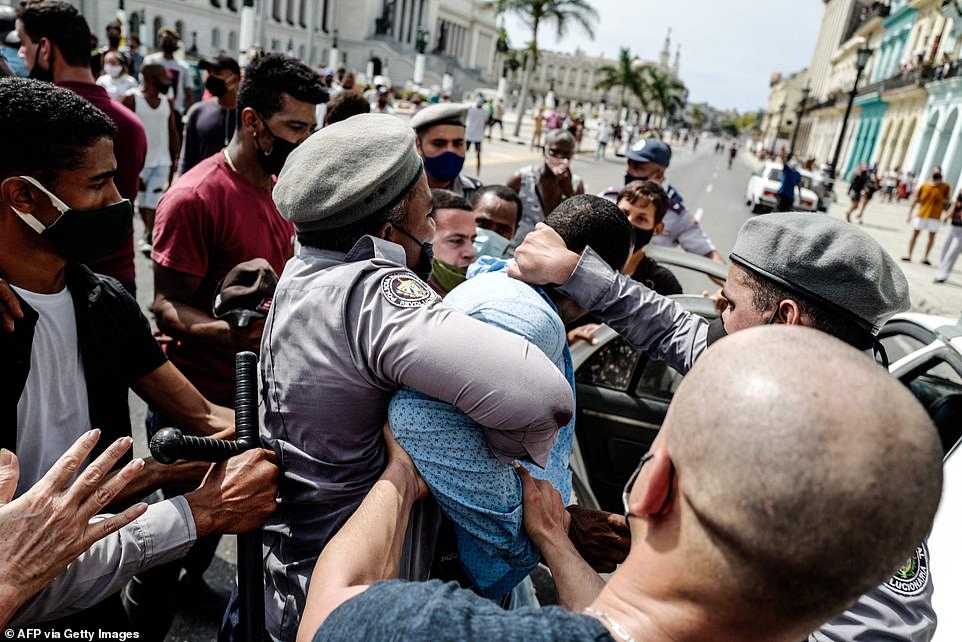 On July 11, protest broke out islandwide in the midst of the biggest economic crisis in Cuba in 30 years 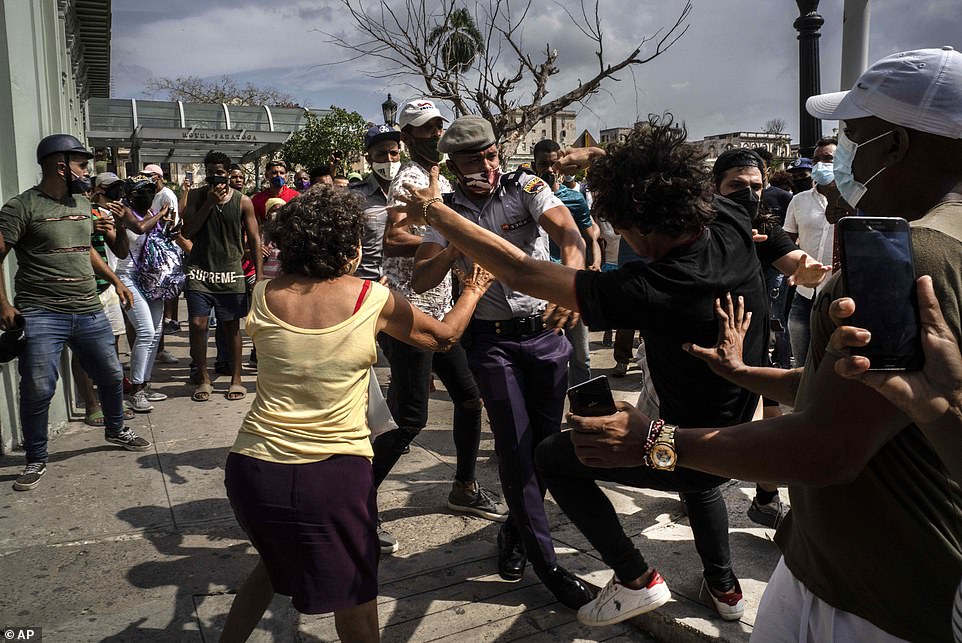 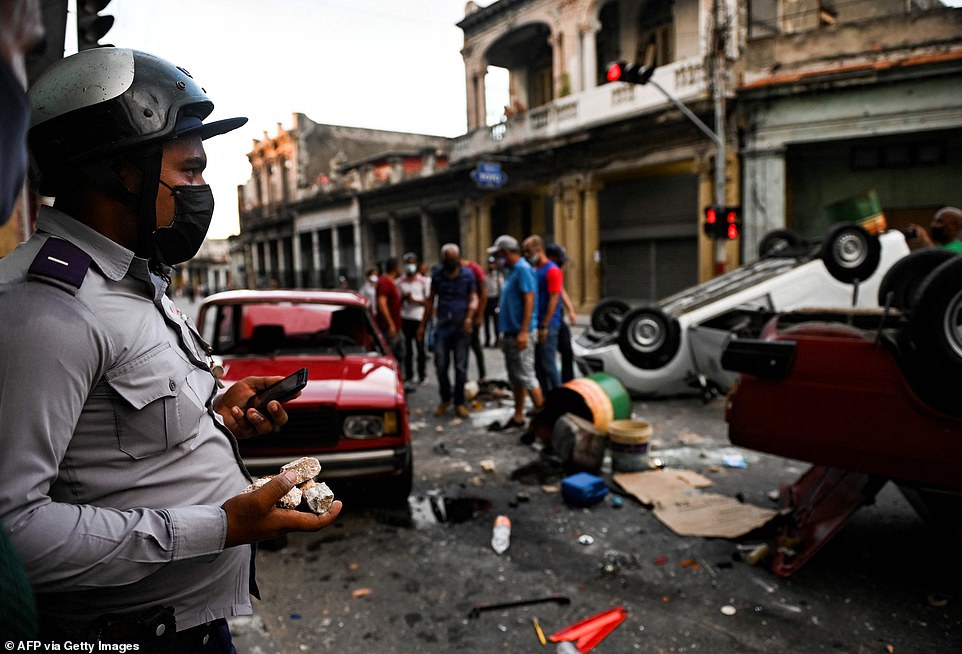 The violent clashes left cities in disarray with scores injured, at least one confirmed dead and hundreds in custody

As violent confrontations broke out between the people of Cuba and their government, Díaz-Canel’s regime swiftly cut off citizens’ internet access to stop images from being widely shared online.

Lawmakers, including Rubio, have been urging Biden to give dissidents free satellite internet access to stop the government from preventing activists who attempt to share their posts on social media.

A State Department working group will look at the feasibility of staffing increases at the U.S. embassy and forming a ‘Remittance Working Group’ to get money to the island.