Coronavirus crackdown on Mykonos, Santorini, Corfu, Rhodes and Crete: Greece closes bars from midnight to 7am and demands Swedish, Spanish and Dutch travelers arrive with proof of a negative test

By Sophie Tanno For Mailonline and Afp

Greece has announced a night curfew for restaurants and bars in some of its top tourist destinations after new coronavirus infections hit a new high.

Areas in which eateries and bars will be closed from midnight to 7pm include the popular islands of Mykonos, Santorini, Corfu, Rhodes and Crete, spokeswoman Aristotelia Peloni said in a televised address.

The restriction will be in place from Tuesday to August 23, she said.

Greece has announced a night curfew for restaurants and bars in some of its top tourist destinations after new coronavirus infections hit a new high. Above, tourists and locals gather at a beach in Athens amid the coronavirus pandemic 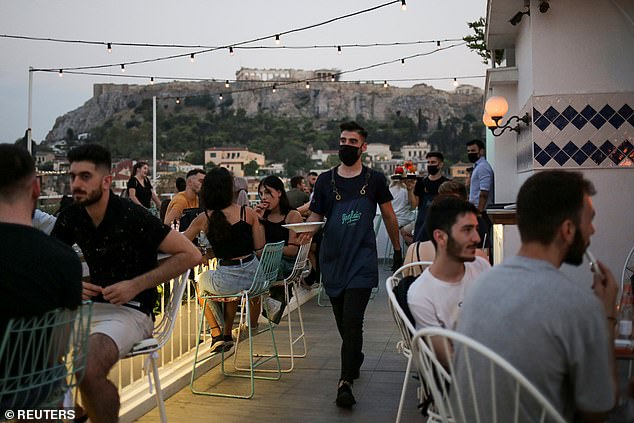 Eateries in certain areas will be closed from midnight to 7pm. Above, a waiter with a mask serves customers in Athens 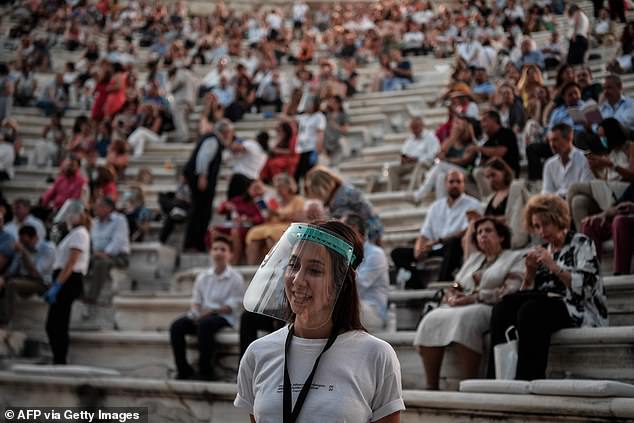 The government also moved to suspend public gatherings, including shows and concerts, where audiences are not seated. Above, an usherette wearing a face shield directs people arriving to the Herodus Atticus ancient theatre at the foot of the Acropolis

In addition, all passengers on flights from Belgium, the Czech Republic, the Netherlands, Spain and Sweden arriving from August 17 must provide a negative COVID-19 result.

Proof of negative tests will also be required for anyone entering the country by land, including Greek citizens and permanent residents.

Tightening controls after a recent spike in Covid-19 infections, the government said the requirement will go into effect from August 17.

The required test cannot be older than 72 hours prior to entry. 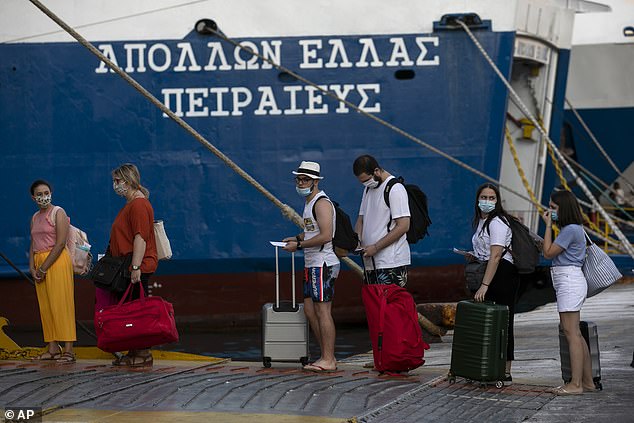 Greek officials are tightening controls after a recent spike in Covid-19 cases. Above, passengers wearing face masks wait to board a ship bound to Greek Saronic islands at the port of Piraeus, near Athens 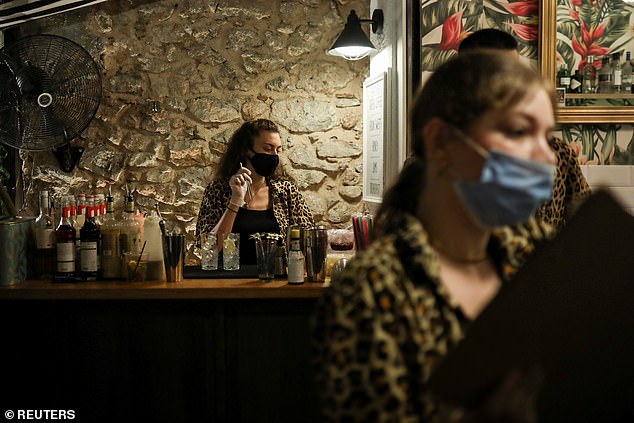 And only 750 people will be allowed in daily from Albania as of August 16, Peloni said.

On Sunday Greece reported its highest daily tally of coronavirus infections, 203 cases, since the start of the outbreak.

The brought the total number of infections in the country to 5,623 since its first infection surfaced in late February.

The government also moved to suspend public gatherings, including shows and concerts, where audiences are not seated.

The announcement comes as it emerged British holidaymakers are gambling on Greece instead of Spain despite an increase in coronavirus cases in the country – as fears grow of a second spike in France.

Brits desperate for a foreign break have set their sights on destinations in Greece, such as Crete, Corfu and Santorini, as reported by The Sunday Telegraph.

Previously the most sought after destinations on Skyscanner, a flight booking website, were Ibiza, Barcelona and Malaga, but they have now dropped out of the top 10, after the UK government changed travel advice required people who return from Spain to England to quarantine for two weeks.

Which areas of Greece are introducing the curfew?

Eateries and bars will be closed from midnight to 7am on the islands of: 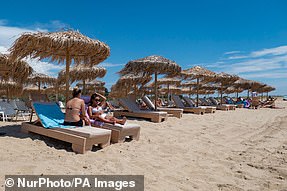 Above, a beach bar at Chalkidiki in Greece