Curve launches cashback booster that means you can earn 2% from 50 retailers, but there’s a catch

When Apple announced earlier in the year it was partnering with Goldman Sachs to launch a card in the US that paid two per cent cashback, the instinctive reaction was to ask if something similar was coming here.

The answer to that question came in two parts: one, if it did it would be the best rate on the market by some distance and two, it’d be entirely unfeasible.

However, Curve – the company that offers a smartphone app that lets you attach several bank and credit cards to one of its own cards and spend them anywhere that accepts Mastercard – has launched a cashback offers that allows users to earn exactly that.

Cash in the App-tic: All-in-one card app Curve has launched a cashback booster that means for 90 days you can earn 2% cashback at six retailers, provided you meet the conditions

What’s more, the list of retailers you can net cashback from is pretty substantial.

Amazon, Starbucks, Ocado, John Lewis, Ikea, Trainline, Spotify, Marks & Spencer and BP to name some of them – the list of 50 can be found here.

Sadly, because nothing in life is truly free, there are some catches.

Most notably, this is a booster deal and not two per cent in itself, but one available to new and existing customers.

In order to benefit, you need to sign up for one of Curve’s three cards; Blue, Black or Metal.

Black doubles the amount you can withdraw per month and lets you spend unlimited amounts abroad with no fees, and also gives you worldwide travel insurance with Axa and gadget insurance, in return for a £9.99 per month fee. 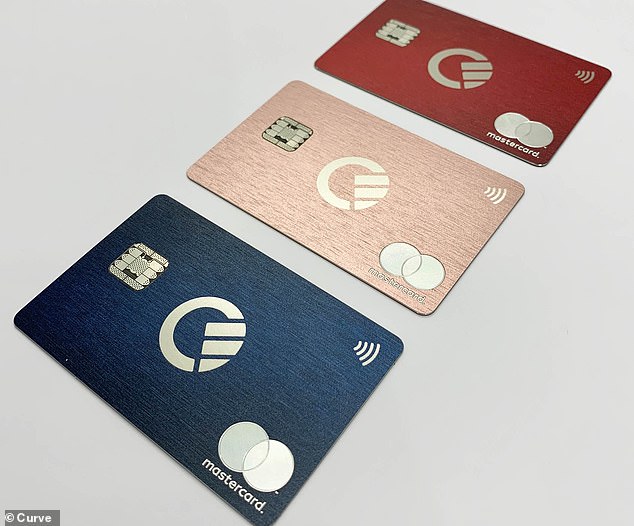 Curve offers three cards, including a £14.99 a month Metal option that gives you the choice of three brushed steel colours

Metal is the most expensive, at £14.99 a month, but gives you a steel card in a choice of three colours, airport lounge access and rental car insurance with Axa.

All three cards also offer Curve’s ‘Go Back in Time’ function – a rather neat feature that allows you to change the card you used to pay for something up to 14 days after the purchase.

How does Curve work?

To start with you will have to download the app onto your smartphone.

Once registered (you won’t be credit checked), you start off by adding cards to the app.

This requires putting in your card details as you would with Apple or Google pay. You can add multiple cards and flick between which one you want to attach to your Curve debit card for individual payments and pick a default payment card.

When you use your Curve card, the company will take payment from your chosen bank account or credit card and pay the retailer, it acts like a third party sitting securely in between the two, similar to when shopping using PayPal.

If your default card doesn’t have enough money to cover the transaction it will be declined, it won’t just move on to other connected cards.

The transactions made through Curve will show up on your bank statements as made by Curve and they also have a reference on them that helps identify where you spent.

Curve customers will have to go into the app in order to sign up for the cashback.

Once you’ve done that, you will be prompted to choose the retailers you can earn cashback on – which we explain in more detail below.

Each of Curve’s cards already give you a one per cent introductory cashback offer for the first 90 days after activating your Curve card.

And while Curve has a list of 50 retailers you can earn cashback from, you can only choose to get money back from three of them – if you’re a Blue cardholder – or six if you hold Black or Metal.

For example, you could choose John Lewis, Starbucks and Tesco if you held a Blue card, and you would only earn cashback from those retailers when you spent money with your Curve card.

Amazon, it’s worth noting, is effectively locked behind a premium paywall that means you can only choose to earn cashback from it if you hold a Black or Metal card.

That’s the introductory offer which has existed for over a year now, but what Curve has launched is an additional one per cent booster, but one that lasts for Black and Metal holders for an unlimited time.

Holders of the free Blue card only get this boost for just 90 days, meaning that if you signed up tomorrow your card would cease to be a cashback card after three months.

Black and Metal holders would have the benefit of a heady two per cent cashback rate for just 90 days, before it dropped to one per cent.

More confusingly, while the introductory cashback offer gives holders of Curve Black the chance to earn cashback from six retailers, this booster offer only allows you to earn from three.

The new Curve cashback card in-app. You need to switch to this card in order to spend the cashback you’ve earned

The cashback you earn is received instantly, and to spend it you will have to switch to the virtual ‘Curve cash’ card in your Curve app, then pay using your physical Curve card with the cashback you’ve accumulated.

Can it be beaten?

While two per cent cashback sounds impressive, there is an offer on the market that beats it – but that like the two per cent only lasts for a limited time.

American Express’ Platinum Cashback Everyday Credit Card is a credit card rather than a bank card, and comes with a 22.9 per cent APR, so works slightly differently.

However, users earn five per cent cashback in the first three months of having the card – up to a maximum of £100, which you’d need to spend £2,000 to net.

If you spent £2,000 with retailers you were getting the two per cent Curve cashback with, you’d end up with £40.

Of course, if you’re spending huge amounts then Curve doesn’t come with an upper limit on what you can earn, which is a potential bonus – but you’d need to spend £5,000 over the same period to beat Amex’s offer with Curve.

You’ll notice you can load Visa and MasterCard cards onto Curve, but not Amex.

For about 24 hours that wasn’t the case, with Curve announcing at the end of January it had partnered with the US giant, and that you’d be able to use your Amex card in places that didn’t normally accept it thanks to Curve.

Amex called the rollout a limited beta test and said it wouldn’t be participating further.

As it stands it doesn’t look like there’s much chance of the two getting back together any time soon.

Even bearing in mind the limit on the number of retailers you can earn cashback with, once both Amex and Curve’s promotional periods are up Curve’s offer is, on paper, twice as good as most other offers out there.

Barclaycard’s Platinum Cashback Plus card pays a bonus 0.5 per cent cashback for the first three months you have it.

However, the card isn’t just time-limited when it comes to the welcome bonus, as it then subsequently pays 0.25 per cent cashback, but only until 31 August 2023.

While that’s a bit disappointing, Barclaycard’s offer does come with the perk that until the same date you don’t pay fees on purchases or cash withdrawals made abroad, meaning you save money and can still earn cashback. It comes with an APR of 21.9 per cent.

Finally, mobile-only bank Tandem’s Cashback Credit Card offers 0.5 per cent cashback on every purchase above £1 at home and abroad, and like Barclaycard comes with no fees for making non-sterling purchases. It comes with an 18.9 per cent APR.

Ultimately, your best bet might well be a horses for courses situation. If you spend a lot of money in one shop and it’s on Curve’s list of cashback-eligible retailers, then theone1 per cent is the best bet.

But if you’re after cashback everywhere else you go then Tandem or Barclaycard are also worth considering – and of course you can even load them onto Curve if you’re worried about carrying too much plastic.