‘Get out of this town – you’ve ruined it!’ Customer launches vile racist tirade at petrol station worker before smashing up the counter

This is the sickening moment a yob launched into a racist rant at a petrol station worker and smashed up the counter.

A 34-year-old man has been arrested after police received reports of racial abuse at Texaco Garage in Accrington, Lancashire, on Monday morning.

CCTV footage shows a customer hurling vile racist abuse at the worker, accusing him of being in the Taliban and calling him a ‘f**king refugee’.

In the shocking clip, the mindless thug knocks the clear Covid-19 screen off the counter and tells the worker to ‘get out this f**king town’.

A 34-year-old man has been arrested after police received reports of racial abuse (pictured: CCTV footage of incident) at Texaco Garage in Accrington, Lancashire, on Monday morning

‘I am from this town – I am from Oswaldtwistle and you have ruined it.’

Amid his foul-mouthed tirade, the yob grabs the till and throws counter displays at the cashier.

The customer adds: ‘You f**king record that, because I’m f**king really angry.’

‘You f**king that Taliban comes around again.

Unbelievably, the worker manages to remain calm and does not retaliate throughout the horrifying ordeal, trying his best to pick up the contents that were thrown at him.

The footage, which was widely shared to social media, was branded as ‘disgusting’ by horrified viewers, with many tagging MPs and asking them to ‘do something about it’.

Lancashire Police confirmed a 34-year-old man was arrested on suspicion of racially aggravated assault and criminal damage and has been released under investigation. 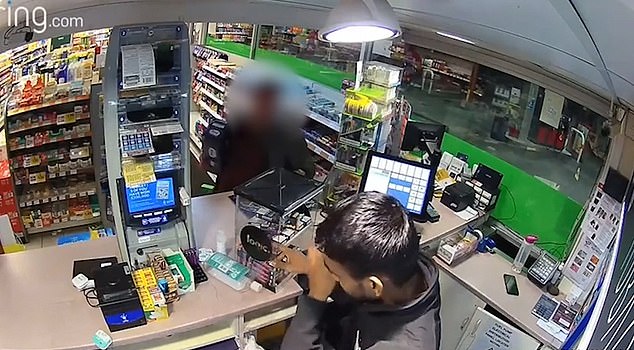 CCTV showed a man hurling racist abuse at the worker, wrongly accusing him of being in the Taliban before aggressively smashing up the counter and throwing displays at the cashier

A spokesperson said: ‘Good morning. Lots of you have been asking about a video circulating on social media and we wanted to tell you what we are doing about it.

‘We were called in the early hours of Monday about a man being abusive to a shopkeeper in the Texaco Garage on Hyndburn Road in Accrington.

‘Officers attended and arrested a 34-year-old local man on suspicion of racially aggravated section 39 assault and criminal damage. We are now carrying out some further enquiries and speaking to the Crown Prosecution Service.

‘We know that the video has been widely shared and we recognise the distress that it’s caused. Everyone in our county should be allowed to live their lives free from harassment and the fear of hate crime.

‘Hate crime causes great distress to its victims and we are committed to investigating all crimes and incidents motivated by hate, supporting victims and bringing offenders to justice.