Customers have slammed Pret’s five drinks-a-day subscription offer as ‘still not worth catching the train for’ and warned it will ‘kill’ independent cafes.

The beleaguered coffee chain launched the £20-a-month deal today – potentially saving workers hundreds – in a bid to lure customers back to its stores.

Those signing up to YourPret Barista can claim up to five coffees, teas, hot chocolates, smoothies or iced coffees a day providing each is purchased for the same person and at least 30 minutes apart.

But would-be customers have blasted the chain’s deal for revealing how ‘overpriced’ their drinks really are and criticised the quality of their coffee.

Others, however, have heralded it as a bargain and congratulated the chain for ‘adapting to the future’ instead of ‘getting out the begging bowl to Boris or whinging about work-from-home’.

Pret A Manger cut almost 3,000 jobs, more than a third of its workforce, in August as it tried to save the business in the wake of lockdown. 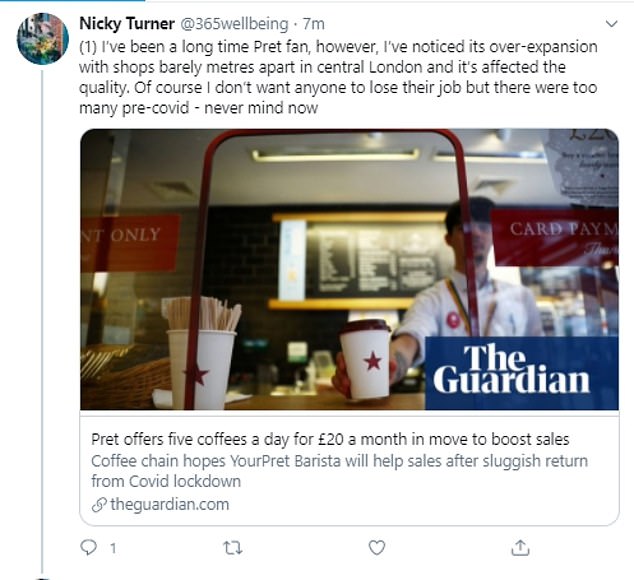 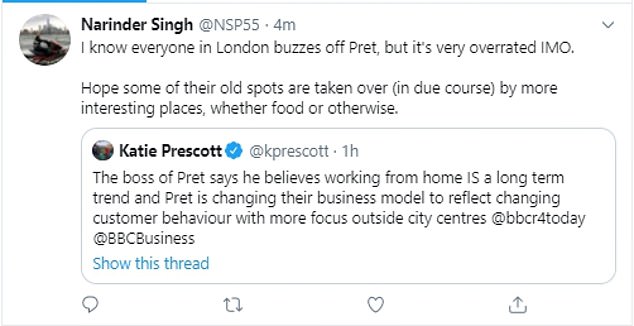 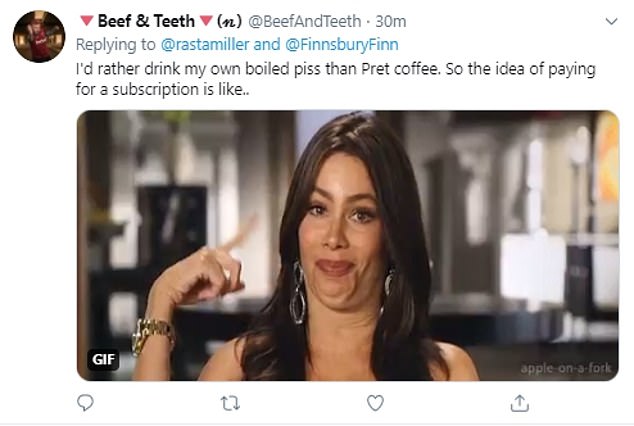 What is the YourPret Barista scheme?

A great coffee giveaway is being launched by Pret a Manger – potentially saving workers hundreds of pounds a month – to encourage a return to high streets.

Customers can sign up to a £20 monthly subscription to have up to five drinks a day.

The YourPret Barista scheme, which also includes tea, hot chocolate, smoothies and iced coffee, is part of the chain’s radical remodelling to fit the ‘new normal’.

Under the scheme, the drinks have to be bought at least 30 minutes apart and can only be for one person. The innovation is set to trigger a coffee shop price war.

Pret is also rolling out a ‘heat me at home’ range and is now delivering sandwiches, salads and coffee to homes.

Slamming the scheme one social media user protested that ‘no one needs five coffees-a-day’ and said they would ‘rather spend the same money on fewer but proper quality coffees from an independent’.

A second added that Pret is ‘overrated’ and a third said it had ‘over-expanded’ in the capital with ‘shops barely metres apart and it’s affected the quality’.

‘Of course I don’t want anyone to lose their jobs,’ they said, ‘but there were too many pre-covid – never mind now’.

Criticising the quality of their drinks, a social media user said: ‘I’d rather drink my own boiled p*** than Pret coffee. So the idea of paying for a subscription is like… (crazy).’

And another said: ‘I’d sign up for this were it not for the fact that Pret serves by far the worst coffee on the high street.’

Their coffee was described as ‘diabolical’ and ‘dreadful’ online with another social media user saying: ‘However cheap the subscription, nothing could draw me into drinking Pret coffee.’

‘I’m not blaming any one for anthing, I’m just saying I have zero sympathy,’ said one. ‘The coffee shop opened by a small family in my local town would get my support.’

Another added sarcastically: ‘I look forward to a Pret in every commuter belt, rural town and village.’

A third said: ‘High street coffee is so overpriced in the UK I feel no sorrow for these money-grabbing businesses.’

And a fourth continued: ‘Still not worth commuting on a sweaty dirty train for hours every day.’

Pret was also criticised for offering the scheme to everyone, instead of just those who have disposable cups. Some social media users felt they should do more to protect the environment.

‘Great idea, but should be mandatory to use a reusable cup,’ said one, ‘but I realise that’s not too easy at the moment’. 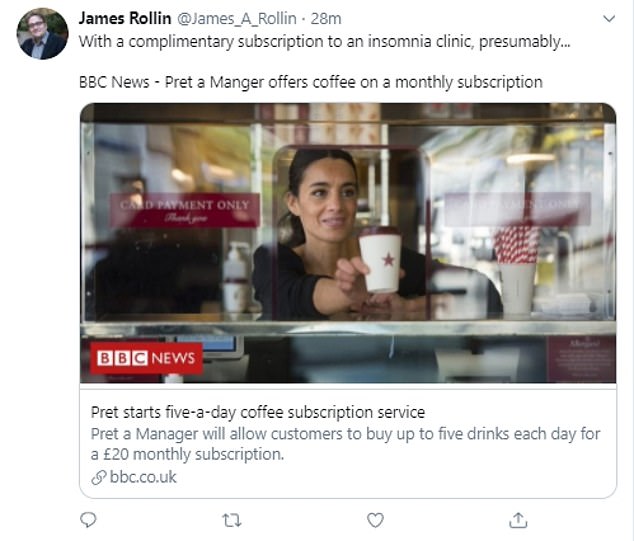 Although the scheme came in for criticism, others voiced their support describing it as a great ‘bargain’.

‘About time a company instead of getting out the begging bowl to Boris of whinging about work-from-home actually adapted to the future so well done Pret,’ said one.

‘So you can have up to five coffees a day (30 minutes spaced between each one) every day of the month for £20?!,’ said another. ‘I must of read the Ts and Cs incorrectly.’

A third user congratulated the chain for ‘fair play’ and said this was clearly a ‘really good value scheme’, especially as you can have ‘smoothies as well’.

‘You’d expect to pay £3.50 for a smoothie, and theoretically, you could get 150-a-month. So what would normally cost you over 500 you’re getting for £20,’ they said. ‘If I was going to be commuting regularly to the city again then I’d sign up.’

A fourth said: ‘If you live near a Pret or are back in the office it’s a bargain.’

It is thought that Pret has launched the scheme in the hope of enticing people back into the store where they may also buy a sandwich, cookie or croissant.

The chain’s UK managing director Clare Clough said in a video published on social media this June their promotion of 20 coffees for £20 boosted their ‘attachment rate’.

‘We’re also starting to see some good increases in the attachment rate,’ she said. ‘So this measures the number of people that come in to redeem their coffee but also buy a food item.

‘We hope to see some driving in that and we’ve asked shops to start encouraging people to treat themselves to a croissant or a cookie as they redeem their coffee in the next couple of weeks.’

The chain lost ‘almost a decade of growth’ due to the nationwide lockdown and the pandemic, it has said.

At the end of August their trade was up, but still about 60 per cent down year-on-year, prompting a wave of redundancies. 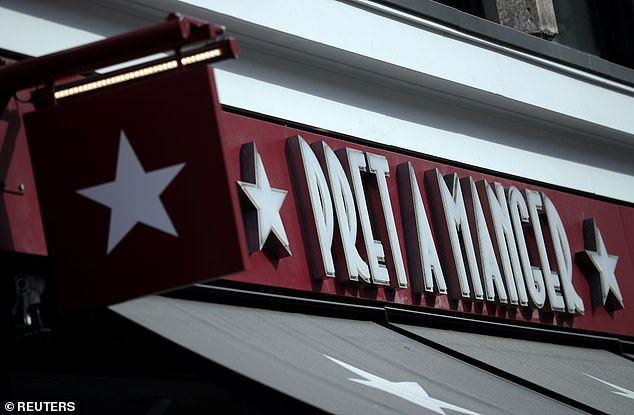 The coffee chain made almost 3,000 redundancies this month as it fights to survive 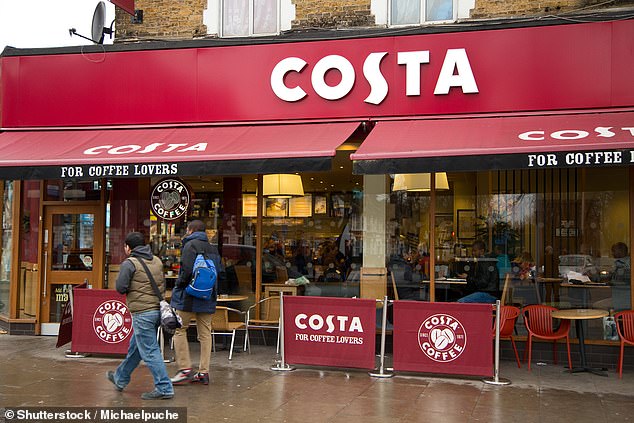 The job losses added to the bloodbath on the high street. Costa has cut 1,860 jobs

The loss of jobs only added to the bloodbath on the high street – with supermarkets, coffee shops and retailers among those announcing redundancies.

More than 100,000 jobs are thought to have been lost from Britain’s high street due to the pandemic.

Announcing the £20 for five coffees-a-day for a month scheme, Pret chief executive Pano Christou said: ‘AS people across the UK begin to get back to the things they’ve missed, our new subscription service is perfect for customers who have been craving one of our barista-prepared drinks.

‘Whether you’re a coffee enthusiast or a tea devotee, we hope this new service helps you start your day strong.

‘This is just the first step in our plan to bring Pret to more people. We now have the building blocks to establish Pret as a multi-channel, digitally-led business, and YourPret Barista is the first big launch we’re able to deliver through our new technology platform.

‘Since reopening back in May, our coffee sales have been rising faster than food – evidence that coffee has become an integral part of both our customers’ everyday routines.’