A $26,000 designer handbag has been destroyed by Australian Border Force officers after its owner failed to buy a $70 permit to bring it into the country.

The alligator skin bag, purchased from a Saint Laurent boutique in France, was confiscated from the West Australian woman at a Perth air cargo depot in January.

The bag was seized by ABF officers on suspicion to have been used or otherwise involved in the illegal wildlife trade, which is an offence against the EPBC Act.

While alligator products are allowed into Australia, they are regulated and monitored through the Convention on International Trade in Endangered Species of Wild Fauna and Flora (CITES).

The unidentified owner of the $26,313 handbag had arranged a CITES export permit from France but did not apply for a $70 import permit from the Australian CITES Management Authority.

The alligator skin hand bag (pictured), purchased from a Saint Laurent boutique in France, was confiscated from the West Australian woman at a Perth air cargo depot in January 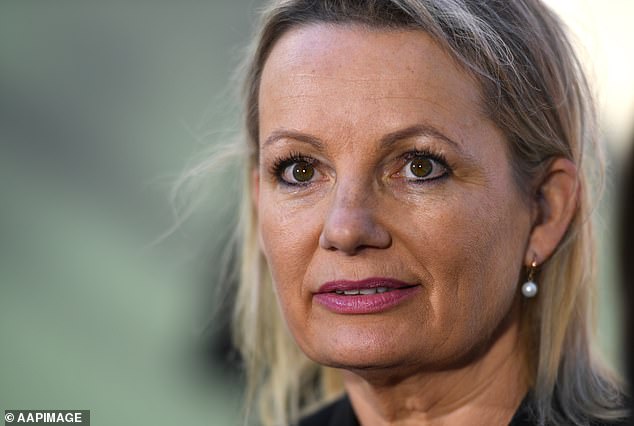 CITES protects species which may be adversely affected by trade, and verifies the international movement of listed species is legal and sustainable.

Commercial and non-commercial trade of species used in the high-end fashion industry – such as crocodile, python and snake leather – is regulated by CITES.

Environment Minister Sussan Ley said the handbag confiscation was a costly reminder for importers to ensure they had the correct CITES permits when importing products into Australia.

‘We all need to be aware of what we’re purchasing online as restricting the trade of animal products is crucial to the long-term survival of endangered species,’ she said in a statement on Friday.

What is CITES and how does it work?

The Convention on International Trade in Endangered Species of Wild Fauna and Flora (CITES) is an international agreement between governments ensuring wildlife trade does not threaten global populations of plants and animals.

About 5,600 animal species and 30,000 plant species are listed for regulation under CITES.

Australians importing or exporting any of the animal or plant species listed under CITES must obtain both an export permit from the country of export and a wildlife trade import permit from Australia.

Some permit exemptions do, however, apply to moving personal items in to and out of Australia.

Trade in these specimens is only allowed in very limited circumstances, such as for research purposes or if the item is vintage.

Australia determines the sustainability of exports of listed wildlife based on the conservation status of the species, management arrangements that are in place, and the scale of harvest and trade.

Whether trade is for commercial and non-commercial purposes is also considered.

Source: Australian Government’s Department of Agriculture, Water and the Environment

‘The Morrison Government closely monitors what comes in and out of Australia to stop and deter the illegal wildlife trade.’

Assistant Minister for Customs, Community Safety and Multicultural Affairs Jason Wood said it was essential Australians made an application for the relevant CITES permits – from both the exporting country and the importing country – when buying  products like these overseas.

‘The Australian Border Force works closely with the Department of Agriculture, Water and the Environment to detect cases of illegally imported exotic wildlife products at the border, including fashion accessories, tourist trinkets, furs, taxidermy animals and ivory,’ he said in the statement.

‘We would like to remind importers to ensure they have the correct permits in place before attempting to import these items.

‘Those who attempt to contravene our border controls to bring in these items without the appropriate permits, should know we are alert to their activities.’

The United States has also started taking its own action to protect reptiles, the Sydney Morning Herald reported,  with California banning alligator and crocodile products in 2019 to put a stop to wildlife trafficking.

The western US state represents about 30 per cent of the alligator skin market worldwide.

Despite many products being produced legally and ethically, many animal welfare groups believe some are derived illegally and are pushing for a new global agreement.

Since being established in 1975, the amount of flora and fauna being legally traded has boomed from $US2 billion per annum to $US320 billion more recently.

Illegal trade is up to $US258 billion each year as well.

Donalea Patman, founder of For The Love of Wildlife, told Sydney Morning Herald almost all CITES parties still use a paper-based system which did not integrate with customs.

‘There is no traceability of shipments from source to destination,’ she said.

‘Without traceability and transparency, there is no proof of sustainability and the sustainable-use model is the basis for the legal trade.’

Ms Ley’s department confirmed the importation of regulated fauna or flora species without the necessary permits was a serious offence under the EPBC Act.

It can carry harsh penalties of up to $222,000 for individuals and $1,110,000 for corporations as well as 10 years imprisonment for wildlife trade offences under the Act.