Scammers are posing as fundraisers looking for kindhearted donations in the wake of Hurricane Harvey, officials have warned.

The United States Computer Emergency Readiness Team (US-CERT) issued a warning on Monday that scammers are taking advantage of the disaster by using social media and email to send out fake links promising to help victims.

Instead, the links send viewers to phony websites where thieves steal credit card and personal information from visitors.

Others have been setting up fake charities claiming to raise funds for Harvey victims but pocket the money instead.

The US Computer Emergency Readiness Team issued a warning on Monday that scammers are taking advantage of people wanting to donate to Hurricane Harvey disaster relief. Pictured above, Kathryn Loder sorts donated clothing at George R. Brown Convention Center in Houston as Tropical Storm Harvey inches its way through the area on Tuesday 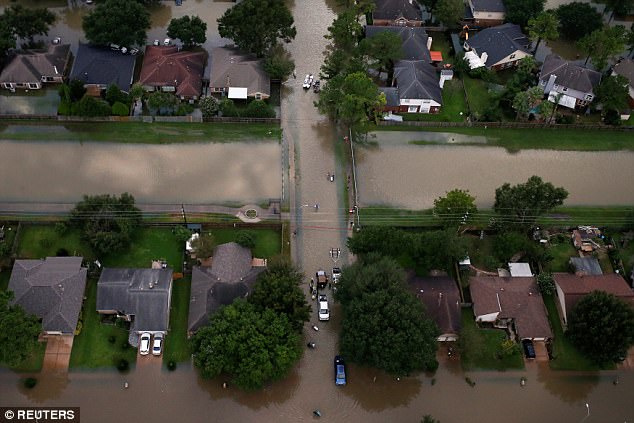 The number of confirmed deaths linked to Harvey is at least 23. Authorities are investigating 17 more deaths to determine whether they were storm-related, and they fear many more bodies may be found as floodwaters start receding

US-CERT said in a statement: ‘Users are advised to exercise caution in handling any email with subject line, attachments, or hyperlinks related to Hurricane Harvey, even if it appears to originate from a trusted source.

‘Fraudulent emails will often contain links or attachments that direct users to phishing or malware-infected websites.

HOW TO AVOID PHISHING SCAMS IN THE WAKE OF HARVEY

Donate to chairities you trust that have proven track records

Be alert for charities that appear to have sprung up overnight

Ensure your money is going to a disaster fun, rather than a general fund for charities

Confirm donation numbers before texting or calling to donate

Find out if the charity or fundraiser is registered

But scammers posing to be part of the foundation are sending out emails with links leading people to counterfeit websites.

Facebook, has pledged to match every donation up to $1million for a Hurricane Harvey recover fund, and Twitter have also been hit by the cyber criminals.

Lohrmann said that scam charity pages have been set up on Facebook that appear to raise money for the Harvey relief effort, but instead lead social media users to phony websites.

He said that on Twitter, bots have been using fake donation links that lead users to malicious software or to spam messages.

Houston has also warned residents of scammers, posing as firefighters and Homeland Security special agents and telling people to evacuate in order to ransack their homes.

Phishing scams have long been a worldwide problem after disasters. The Federal Trade Commision issued warnings after earthquakes in Japan and Ecuador in 2016.

There are a number of legitimate foundations working to raise money for victims of Hurricane and Tropical Storm Harvey. 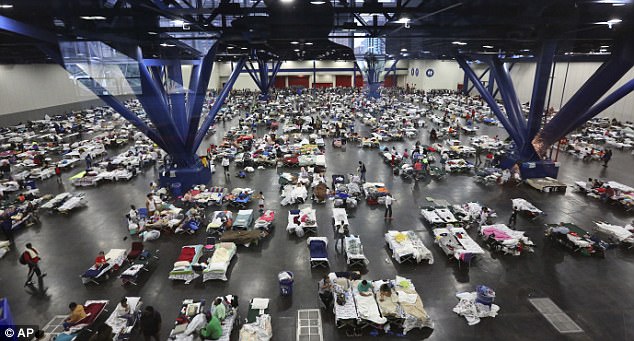 Evacuees escaping the floodwaters from Tropical Storm Harvey rest at the George R. Brown Convention Center that has been set up as a shelter in Houston

There are a number of official charities that people can donate to in the wake of Harvey’s destruction.

The Salvation Army takes donations through its website, helpsalvationarmy.org, by phone at 1-800-SAL-ARMY, or by texting STORM to 51555.

Houston Texans star JJ Watt launched his own fundraising effort, and has raised more than $9million for the relief effort.

Houston’s 911 headquarters is furiously trying to keep up with tens of thousands of calls for help related to Harvey.

Operators are aiding panicked callers even as they’re dealing with their own personal losses in the storm.

At its worst, from Sunday into Monday, some 75,000 calls poured in, more than eight times the normal 24-hour load.

The number of confirmed deaths linked to Harvey is at least 23. Authorities are investigating 17 more deaths to determine whether they were storm-related, and they fear many more bodies may be found as floodwaters start receding.