Centimetres from death: Terrifying moment cyclist is almost wiped out by a van that rear-ended a stationary car

A cyclist is counting his lucky stars after he miraculously avoided a two vehicle collision that left one woman in hospital.

The rider was millimetres away from being killed or seriously injured on his birthday, which happened in Adelaide’s west in the afternoon peak hour on Tuesday.

CCTV of the horrifying accident obtained by Nine News shows the cyclist waiting behind a black Subaru Outback to turn right from Tapleys Hill Road at Royal Park.

Seconds later, a white van comes up behind him and slams into the black Subaru Outback, which causes extensive damage to the van.

‘I heard a massive bang so I came sprinting out the front and there was just carnage all the way down the road,’ witness Brandon Bishop told Nine News.

Another shocked onlooker added: ‘He was a lucky person.’ 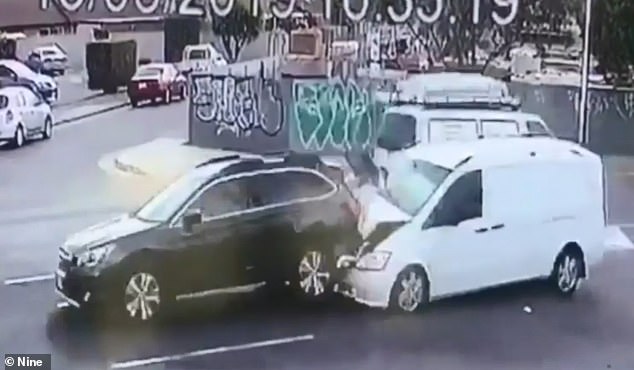 The Subaru female motorist, 35, was taken to hospital while 22-year-old male driver of the van was not injured.

The male rider was not injured after he managed to swerve just in time to avoid being knocked over in the carnage.

‘I don’t know what to say there, it was just incredible. I have never seen anything that close and someone not getting killed,’ Mr Bishop said.

‘It was his birthday, the old chap on the bike and he was heading to get himself a little gift for his birthday, so I think the biggest gift is that he’s still alive.’ 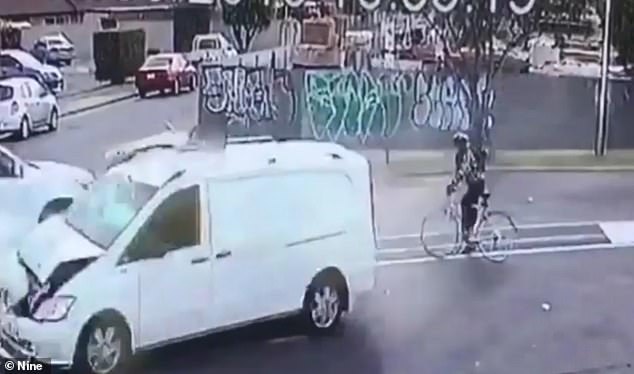 The rider (pictured right) miraculously avoided being struck in the horrifying crash, which is being investigated

Locals urged motorists and cyclists to take extra care at the intersection, which is a hotspot for near-misses.

South Australian Police are investigating the crash and urge anyone with information to call Crime Stoppers on 1800 333 000.