Cyclist Tim Declercq shows off bruises after being caught in hailstorm

‘As if Le Dauphine wasn’t painful enough!’: Cyclist Tim Declercq shows off some extraordinary bruises on his back after being battered by huge hailstones in stage two of the Criterium du Dauphine race in France

Professional cyclist Tim Declercq has shown off the gruesome bruises left behind by giant hailstones after a storm battered stage two of the Criterium du Dauphine in France.

It was raining all day on the Col du Porte, but the weather turned even worse as some of the stragglers reached the finish line.

Riders such as Declercq and Maxime Chevalier caught the worst of it, and were left with painful looking welts on their backs afterwards.

It didn’t take long for the road to become icy in the bizarre conditions, as the riders tried to finish the stage.

Some struggled to stay on their bikes, while others decided to simply walk their bikes over the finish line.

For those still racing, it was a grueling end to what is already a tough section of road to ride. 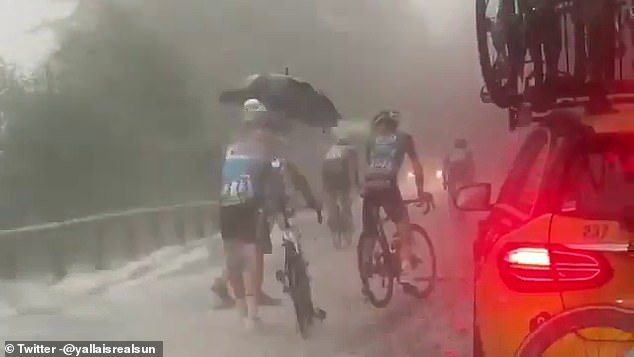 Luckily for those towards the front of the pack, they had already finished the stage by the time the hailstorm hit and were able to dive for cover.

The riders will take part in stage three on Friday, covering 157km from Corenc to Saint-Martin-De-Belleville, and some will have pain that goes beyond the usual leg aches.