The ex-wife of Da Vinci Code author Dan Brown has told The Mail on Sunday that she was left emotionally shattered by his repeated infidelity during their marriage.

Blythe Brown launched a lawsuit against her husband in July claiming he had ‘sordid extra-marital affairs’ and accusing him of ‘secretly plundering significant sums of their marital assets’, which he allegedly spent on four mistresses, showering one with horses and a home.

Last week, Mr Brown, 56, spoke exclusively to this newspaper to reveal he is countersuing his ex for libel and slander, insisting her lawsuit had ‘no regard for the truth’.

Pictured: Da Vinci Code author Dan Brown with his wife Blythe Brown, who launched a lawsuit against her husband in July claiming he had ‘sordid extra-marital affairs’ and accusing him of ‘secretly plundering significant sums of their marital assets’. He has said he is countersueing her for libel

But last night, Mrs Brown – who was married to the best-selling author for 21 years – said: ‘This is all about trying to regain my self-respect. After the divorce, I learned Dan had gone to great lengths to lie and to betray me, which left me emotionally shattered.’

Mrs Brown says her husband cheated on her repeatedly during the last six years of their marriage – including with Dutch horse trainer Judith Pietersen, 29, and bought her two horses, one costing £260,000.

She claims the author also had affairs with a hairdresser, his personal trainer and a political official. 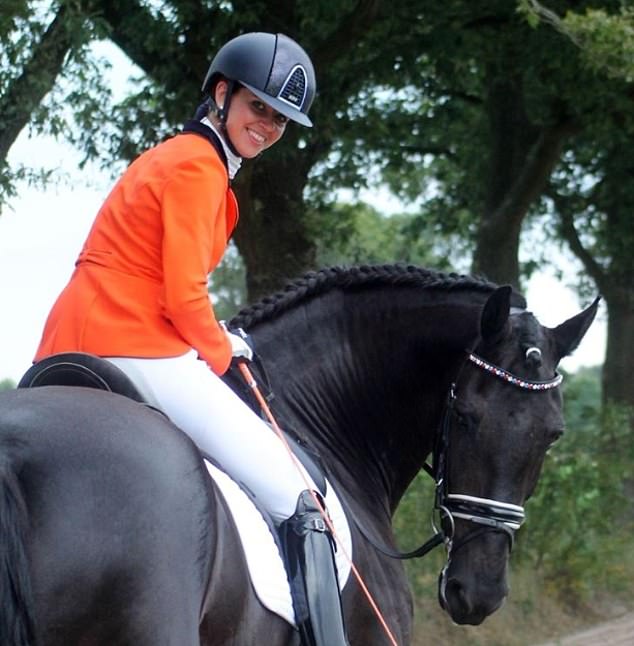 Pictured: Judith Pietersen, a Dutch equestrian who Dan Brown allegedly had an affair with, according to Mrs Brown

‘He even swore to the court in the divorce he had no future projects in the works and told me he was retiring, which clearly wasn’t true. I just don’t recognise the man I knew any more.’

Mrs Brown won an early victory in their fight in August when a Dutch judge ordered Ms Pietersen to disclose her financial records.

Mr Brown said: ‘The lawsuit has been heartbreaking. I have great respect for Blythe. She and I were terrific together, a great couple for many years.’