The family of a 30-year-old man shot dead by two Kansas police officers earlier this year has expressed deep disappointment with the decision by the local district attorney to not charge the officers.

Dominique White was shot and killed by two police officers in Topeka, Kansas, on September 28, with the incident recorded by one of the officers’ body camera.

Video footage shows White being stopped and searched by the two officers, and although he initially tells them he is not armed, they spot a gun in his back pocket.

He co-operates with the officers and allows them to search him, however upon spotting the gun they move to arrest him, at which point White struggles.

The officers repeatedly urge him to stop, but White breaks away to flee from them. Moments later, multiple shots are fired at him.

White’s death certificate shows he died from gunshot wounds to his back. Kagay’s report confirms he was shot in the back.

White’s family members said in a statement that they are ‘incredibly disappointed’ by the district attorney’s decision not to charge the police officers.

‘My son was shot in the back while attempting to run away from officers,’ White’s mother, Mary Theresa Wynne, said in the statement. ‘The video shows that they did not need to shoot and kill him.’ 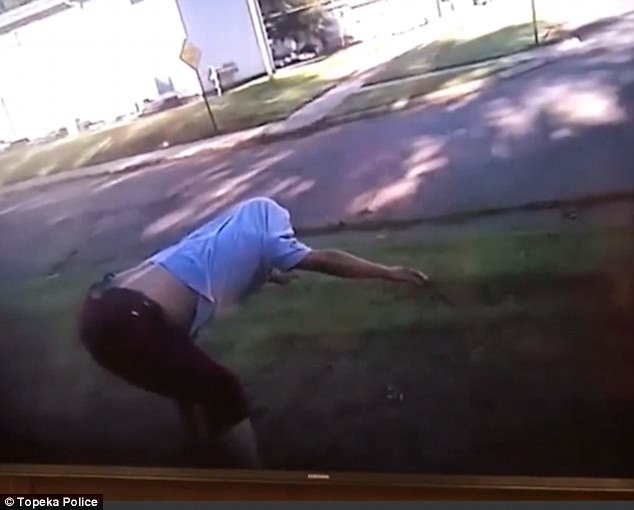 Following orders: Police bodycamera footage shows that White initially co-operated, but that he lied about having a gun – something which the officers soon discovered 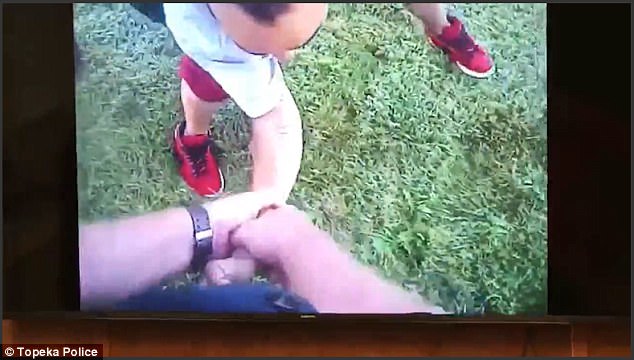 Panic: The two officers move to arrest White, at which point he wrestles out of their grip and being to flee from them 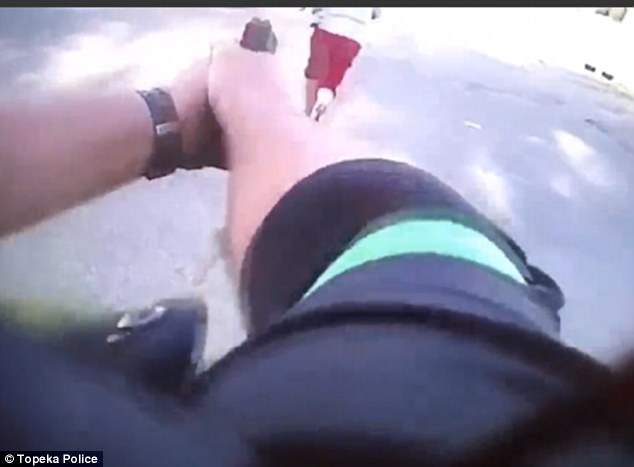 Shocking: As the 30-year-old runs from the police officers they shoot him four times in the back, killing him instantly

In his report, Shawnee County District Attorney Mike Kagay described White, who had spent seven months in prison on a felony gun charge, as acting suspiciously after the officers responded to a call about shots being fired.

The district attorney’s analysis said police found a firearm loaded with eight rounds of ammunition on White, along with two loaded magazines and a knife. The report described White as ‘uncooperative and combative throughout the incident.’

‘It was Mr. White’s actions that escalated these events,’ Kagay said in his report, adding later that ‘no reasonable judge or jury would find the actions of either officer involved in this matter to be unlawful.’

The city has faced criticism over the handling of the shooting. It has not released the names of the officers involved, and police body camera footage wasn’t made public until Kagay showed it to news reporters Wednesday.

The family’s attorney is Gillian Cassell-Stiga of Beldock Levine & Hoffman, the same law firm that represented the family of Eric Garner, an unarmed black man who was stopped by police on Staten Island in 2014 for selling untaxed cigarettes and died after a white officer placed him in a chokehold. While no one was prosecuted over Garner’s death, the city paid $6 million to settle a civil court lawsuit.

Topeka city spokeswoman Molly Hadfield said the Police Department will complete its own follow-up internal investigation before deciding whether to release the officers’ names. 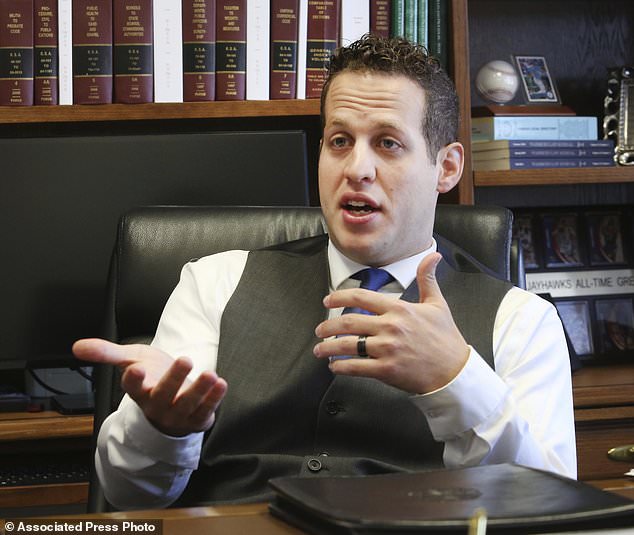 Kagay’s report noted that the area on Topeka’s east side where White was shot has had nearly weekly reports of gunshots, 32 reported robberies and two homicides in the past five years. The report described the two officers as police veterans familiar with the area.

White had been out of prison less than five months. He was ordered to serve probation after pleading guilty to a burglary charge in 2015, went to prison in October 2016 after pleading no contest to illegally possessing a firearm and was not supposed to have a gun.

According to Kagay’s report, White tried to walk away from officers when they arrived at the scene and ignored multiple requests to stop before they caught up with him. The report said his blood later tested positive for the presence of marijuana and methamphetamine.

White had gloves in his possession that tested positive for gunshot residue, the report said. That and other evidence suggested White fired the shots that brought officers to the area, according to the report.

‘There is also little doubt that Mr. White was attempting to avoid being detained or searched by the officers,’ Kagay said in the report. He added that the officers remained ‘calm and professional.’

‘Had Topeka police exercised restraint, Dominique would be alive with us today,’ she said in a statement.