Dad with macular degeneration gets DREAM CAR for Christmas

Macular degeneration is a debilitating condition that can dash the dreams of those who are diagnosed with it.

But for one Texas Civil Air Patrol member, the disheartening news was just another reason for his family to help him make one of his most talked-about ambitions come true.

John Hinch, 71, had long told his wife and two daughters that he one day wanted to own a vintage CJ5 Jeep, but had never gotten around to buying one. 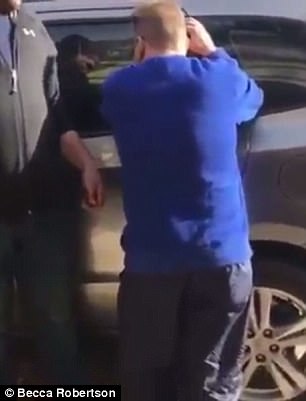 A big shock! John Hinch, 71, of Katy, Texas, was filmed being surprised with his dream car after being diagnosed with macular degeneration

So, when the news came that John’s vision would eventually deteriorate too much for him to drive, his family knew that this was one box on the bucket list that would need to be checked as soon as possible.

John’s wife Carolyn made the decision earlier this year that it was time to find the perfect Jeep before her husband lost his vision – and before his license expired once and for all next year. So, she and the other family members started scouring listings.

They started looking for the car in April, but sadly had no luck finding something in their price range. Then, last month, Jeana and her fiance Matt experienced what she describes as a ‘God Wink’ moment.

‘My Fiance Matt and I were out for a drive the day after Thanksgiving and we saw the Jeep for sale on the side of the road out in the country. It was PERFECT,’ Jeana tells Daily Mail Online. 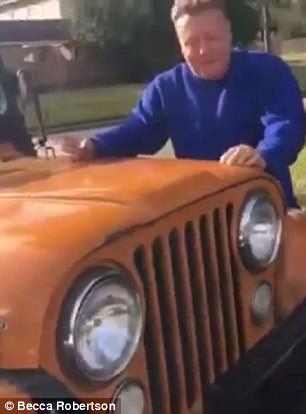 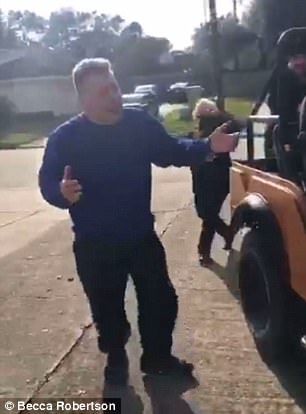 Happy days: John had long told his family that it was his dream to one day own a vintage CJ5 Jeep, but he now only has one year left to drive 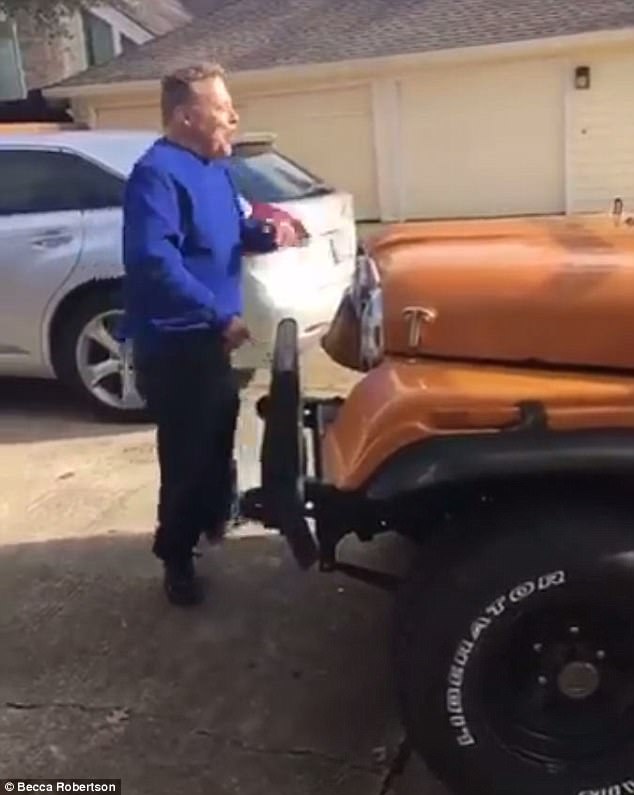 Coming true: A video of the moment shows John repeatedly exclaiming ‘shut up!’ as he looks over his new present

‘The seller had multiple offers from dealers and people who restore Jeeps but I told him my story about my father and how it was his dream car and how he had one year left to drive, so he reduced the price and we got it!’

Jeana and Matt took the Jeep home to Austin, where they had some work done on the car so it ‘would run perfectly for [dad].’

Then, on December 23, they drove their gift down to John’s home in Katy outside Houston and parked it down the street.

‘While my dad was inside eating my son came in and told him he couldn’t figure out the bike pump and needed his help pumping up the tires,’ says Jeana.

‘This made my dad start complaining about how he’s the only one that “knows how to do anything around this house” and walked outside to see his surprise.’ 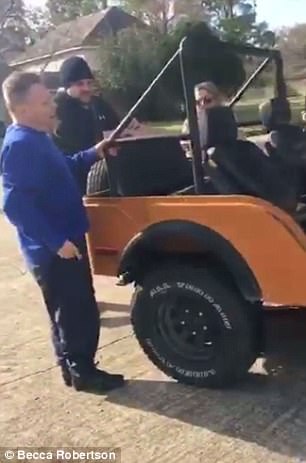 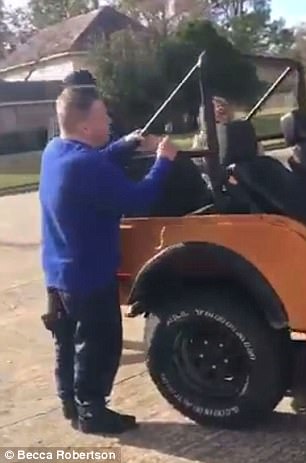 Big goals: John’s daughter Jeana tells Daily Mail Online that she and her family had been looking for the car since April 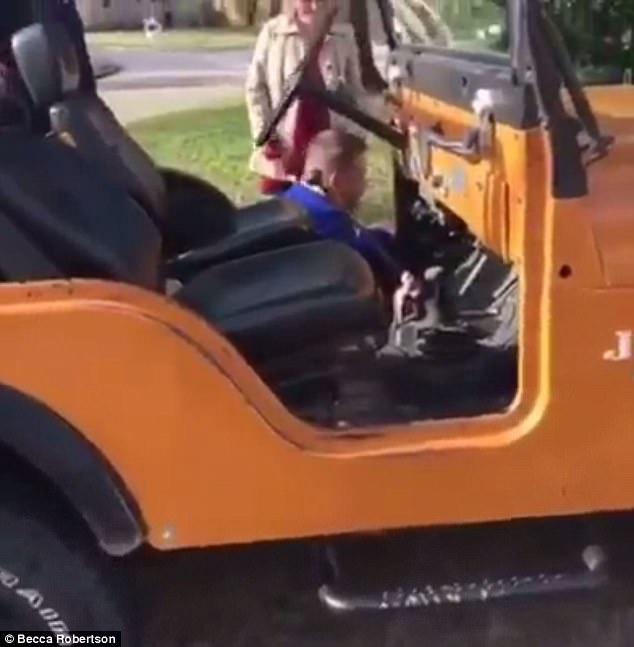 A little too much: John’s family shout ‘don’t faint!’ as he drops to his knees among all the excitement

The big moment was caught on video, starting with John walking out of the garage and being stopped in his tracks by the sight of the orange Jeep in the driveway.

‘Shut up!’ he shouts when he realizes the car is meant for him. ‘Shut up!!’

As he walks up to the car, his family explain that they couldn’t get one in white – presumably his preferred color – and that it only has three gears, but John, clearly over the moon, simply responds: ‘That’s all I need!’

When they reveal that Matt was the one who found the car, John is seen leaping at the taller man with a massive hug, exclaiming: ‘Get a picture! Get a f***ing picture!’

At one point, he becomes overwhelmed and drops to his knees, with his family shouting: ‘Don’t faint!’

The heartwarming clip was shared on Facebook by Love What Matters, where it has been viewed more than 240,000 times, with hundreds of people praising John’s family for their touching gesture. 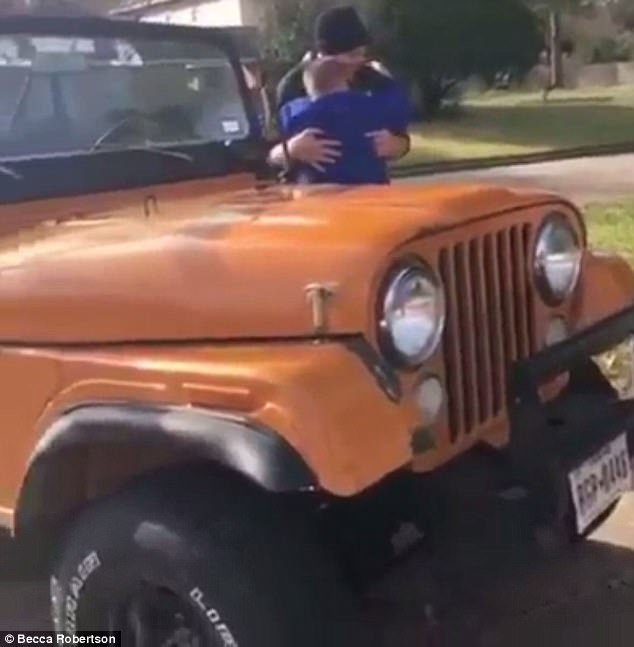 Big thanks: When he learns that his daughter’s fiance Matthew found the car, John leaps into his arms 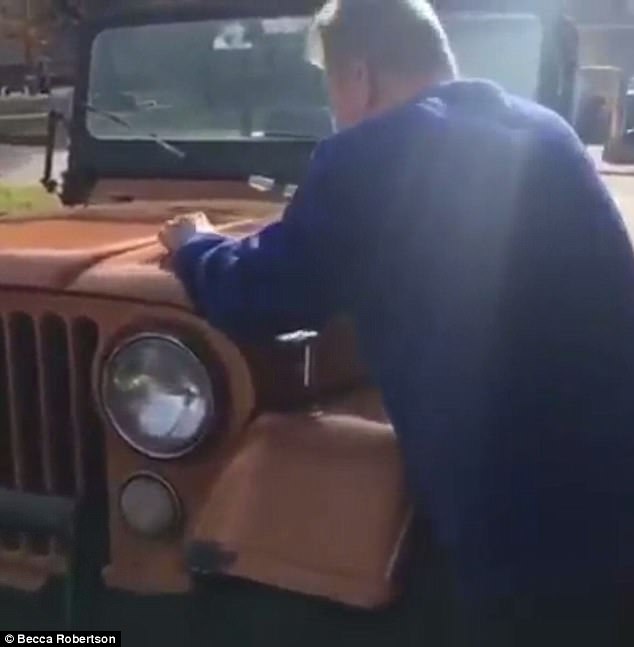 Going big: The video was shared by Love What Matters, where it has been viewed more than 240,000 times

‘God bless you all for making your dad SOOOOO happy, and thank you for sharing this with us…it was worth watching over and over!’ wrote one viewer.

Jeana tells Daily Mail Online that John has since been driving the jeep around ‘non stop,’ adding: ‘My mother even found him and the cat just sitting in it the other night around midnight. All he kept saying was “I can’t believe it’s mine.”‘

John has even told his family that this was the best Christmas present he has had since he was an eight-year-old finding a train set under the tree.

‘He has promised to give up his license next year (without a fight) and give the jeep away at that time,’ says Jeana. ‘Until then, he say’s he’s going to put all his time and money into his new ride.

‘My dad is such a great guy, who doesn’t ask for much in life. It was really great to be a part of making a dream of his come true.’