If more evidence were needed that Rishi Sunak must urgently deliver on his pledge to tackle illegal immigration, it came yesterday in the most harrowing circumstances imaginable.

Hours after the Prime Minister announced bold plans to fix our failing asylum system, four migrants died when their flimsy dinghy capsized in the ice-cold waters of the Channel. With 39 others rescued, the disaster could have been much worse.

This incident, off Dungeness, is not only an appalling tragedy. It is also a reminder of the failure of politicians in both Britain and France. Why have they failed so pitifully to stop ruthless people smugglers from continuing to ply their evil trade?

Hours after the Prime Minister announced bold plans to fix our failing asylum system, four migrants died when their flimsy dinghy capsized in the ice-cold waters of the Channel. Migrants are seen above being rescued

While the drownings were shocking, they were hardly a surprise. Only a year ago, 27 migrants perished when their small boat sank shortly after leaving the Calais shore. Since that distressing day, nearly 50,000 have made the illegal crossing. Despite the weather worsening, the surge shows no sign of abating.

So it’s vital, therefore, that ministers find a way to break the lucrative business model of the trafficking gangs who send people on the treacherous journey.

The truth is that once an asylum seeker reaches British soil, they are unlikely to leave – whether or not their claim is genuine. That is a major reason so many risk their lives to reach here.

Another is that whenever the Government tries to tackle the scandal, an unholy nexus of the Labour Party, professional agitators and activist lawyers deploy every trick in the book to block it.

This is what has happened with the Rwanda scheme, currently in legal limbo. Yet every migrant who successfully crosses the Channel incentivises another to make the perilous trip. 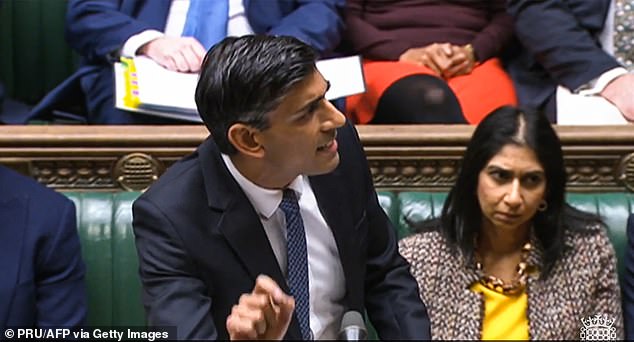 If more evidence were needed that Rishi Sunak must urgently deliver on his pledge to tackle illegal immigration, it came yesterday in the most harrowing circumstances imaginable

By thwarting any crackdown, the liberal Left is effectively colluding in the criminal gangs’ trade in human misery.

With his promising new blueprint, however, Mr Sunak is trying to make it easier for real refugees to enter the UK (subject to an annual limit), while disqualifying anyone arriving illegally from staying here. That is fundamentally right, fair and humane.

Only if there is a realistic prospect of economic migrants being swiftly removed, either to their homeland or another safe country for offshore processing, will they be deterred. After all, who would pay a big sum to a people smuggler if there is little possibility of living in the UK?

But for his plan to succeed, Mr Sunak must ultimately be prepared to rip up the Human Rights Act and suspend Britain’s membership of the European courts.

He will undoubtedly face a huge clash with opponents. But he has now drawn a line in the sand. Beating illegal immigration is what voters will judge him on.

If he succeeds in cracking the Channel crisis, the PM will not only end the cruel trafficking trade – he’ll also save lives.

Time to get tough, PM

It is truly shocking that countless cancer patients could miss out on vital treatment because nurses are going on strike.

Some risk becoming collateral damage in the Royal College of Nursing’s walkout today in a pay row with the Government.

This is scarcely defensible. Did they really embark on a career in such a caring vocation only to leave people in pain and misery because of their actions?

With industrial disputes escalating, the trains still at a halt and no one getting Christmas post because of a Royal Mail strike, isn’t it time Mr Sunak got tough?

In an interview with this paper, the PM says that he is ready to end union tyranny by introducing strike-busting laws.

On his side he has moral force, voter support and a huge majority. He’ll never get a better opportunity.