Dallas Cowboys star pass rusher Micah Parsons has fired back at those who tried to say he shaded teammate and star quarterback Dak Prescott in a Tweet he posted Wednesday.

Parson’s original tweet was to quoting a video of Bills general manager Brandon Beane discussing the differences between the Bengals having a star QB and wide receiver who are on low-cost rookie contracts compared to ones on high-cost deals when Parsons said: ‘Besides Mahomes, every team in the final 4 Qb is on a rookie deal and surrounded by talent! Mhmm interesting take!’

After social media users commented on the post accusing him of aiming a dig at Prescott and his massive contract for the Cowboys’ failure to advance past the NFC Divisional playoff round.

Hours later Parsons responded by sending out another tweet which read: ‘Listen we not gonna sit here like I’m talking about Dak. Shid when I get paid ima want a big contract too ! Come on stop reaching! [sic]’

Prescott is currently set to enter the third year of the $160m deal and is set to make a base salary of a $31m.

Brock Purdy, Joe Burrow, and Jalen Hurts, aka the three final four quarterbacks not named, are all on rookie contracts that see them make less than $2m in salary in 2022. 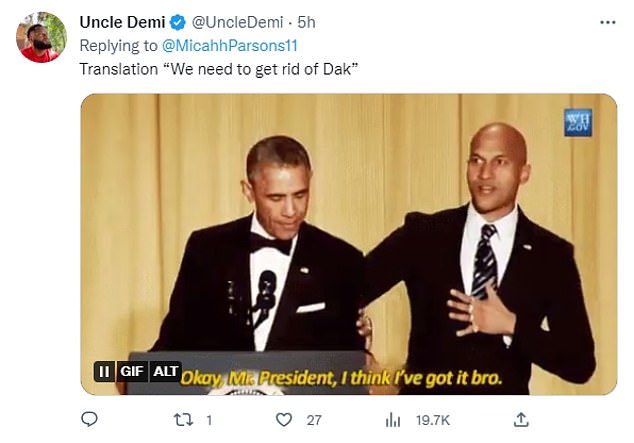 ‘And I Believe he won the SB on his rookie deal,’ one fan said in reference to Mahomes winning a Super Bowl while still on his rookie contract.

‘I like this shade,’ another said before adding several laughing emojis.

‘Translation “We need to get rid of Dak,”‘ added another before posting a gif of when former president Barrack Obama brought out Keegan-Michael Key to add some comedic relief during one of his speeches. 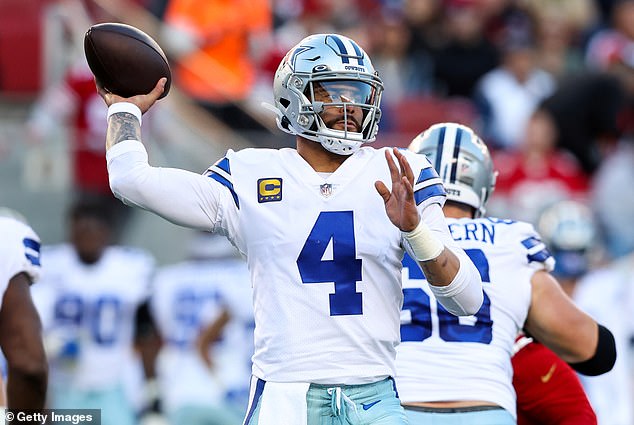