New Zealand Olympic shot putter Dame Valerie Adams has responded to the balcony picture that left some fans concerned for her baby’s safety.

The seemingly innocent photograph shows the 33-year-old mother and six-month-old daughter Kimoana standing on the balcony of a high-rise building with oceanfront views.

But some were feeling anxious when they noticed how close the pair were standing to the hotel railing as they celebrated the athlete’s fifth Commonwealth Games on the Gold Coast.

Taking to social media on Thursday, Adams responded: ‘Kimoana is in safe hands’, along with hashtags ‘calmthefarm’, ‘enjoytheview’ and ‘moveon’.

Most of her adoring fans defended the picture.

‘One of the strongest women in the country, and she looks like she has a pretty firm grip on Kimoana too,’ one wrote.

Another said: ‘There will always be someone with a judgemental opinion, good on you for rising above. You are an inspiration to mums everywhere. Who else can say they won a silver medal at the commonwealth games six months post baby.’

Another posted: ‘Wasn’t worried in the slightest. I just love this photo.’

Another wrote: ‘Of course she is! What a ridiculous drama over nothing. As if you would let anything happen to her! You do you Mama.’

Another posted: ‘I think the comments say more about some people’s fear of heights than anything else. They sound like they’d be scared even if there was no baby in the photo.’

And another said: ‘Too many people overreacting. Of course you’d never put your bubba in danger. I love this pic!’

The supportive comments come just days after some fans expressed their concerns over the picture.

‘Happy six months my baby girl. I love you more then you’ll ever know. Our journey so far has been incredibly amazing but tough,’ Adams wrote in the caption alongside the image on Facebook.

‘Today we are in the Gold Coast for mummy’s 5th Commonwealth Games. Thank you for the inspiration.’

But the momentous occasion on the Gold Coast has left some fans anxious. 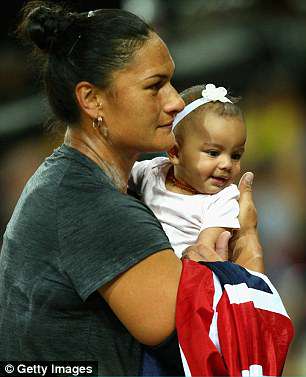 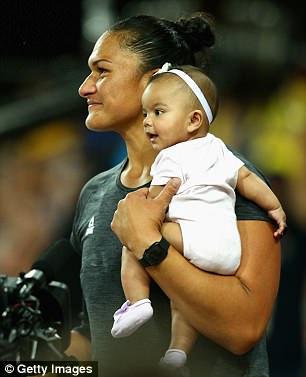 ‘This woman is so inspirational and I hope she wins something today but that balustrade is freaking me out. Looks so low but I am guessing that Val is just so tall,’ one wrote.

One said: ‘This gives me anxiety that you’re standing so close to the rail and you’re so high up.’

One wrote: ‘That height is scaring me!’

And another said: ‘Can you move to the right a little more, you’re making me nervous.’

One fan even likened the candid photograph to Michael Jackson’s infamous balcony stunt when he dangled his nine-month-old son from a fifth floor hotel balcony.

‘Bit close to the edge with bubs #michaeljackson,’ the person said. 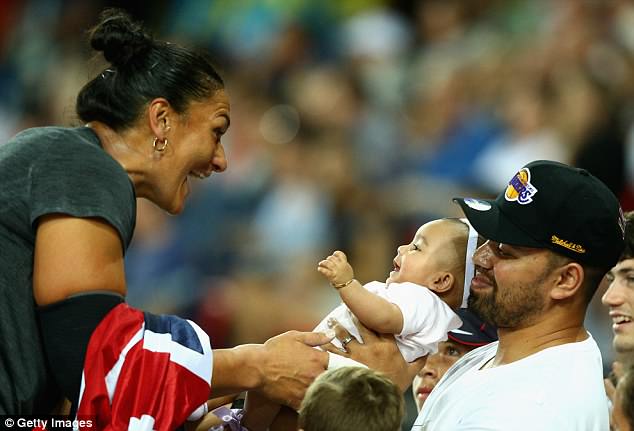 Despite the concerns, hundreds of fans seemed unfazed by the picture as they were more infatuated with her adorable baby girl.

‘She is possibly, the happiest little sweetheart I have ever see, and so very beautiful, congratulations Valerie, great sportswoman, wonderful mother,’ one said.

Another posted: ‘Your baby is beautiful and you look stunning. Beautiful all round I say – you must be both good for each other…’

One wrote: ‘She is super gorgeous. Well done to you, you are such an inspiration for so many people. You make NZ proud.’

Another posted: ‘What a beautiful photo of you and your Daughter and you have a magic day.’

And another said: ‘Baby’s smile is already a winning smile.’