From Carry On films to Terry And June… and even Absolutely Fabulous, Dame Whitfield the comedy darling of Middle England passes away aged 93

By Ben Ellery for The Mail on Sunday

From the Carry On films to starring in Terry And June and Absolutely Fabulous, she was the comedy darling of Middle England.

Last night the world of showbiz was in mourning for Dame June Whitfield, who has died aged 93. Her agent confirmed ‘she passed away peacefully’ on Friday evening.

Tributes to the star poured in from the world of British comedy.

Joanna Lumley told The Mail on Sunday: ‘I am heartbroken to lose such a darling friend and shall never forget her sensational talent, humour and her generosity to us all who had the joy of working with her on Ab Fab. She will always have a most special place in my heart.’

Television producer Jon Plowman, who worked on Absolutely Fabulous, tweeted: ‘There was no one with more warmth or a better ability to just “place” a line, always an act of utter precision. A great loss.’

Comedienne Miranda Hart tweeted: ‘So very sad.’ She added: ‘I once sent a letter to many actors, as a budding (I mean desperate) comedy actor, to ask for sponsorship for the Edinburgh Festival. Dame June replied. Fifteen years later when I met her she had all my letters and the notes of the show she sponsored. I cried then too.’ 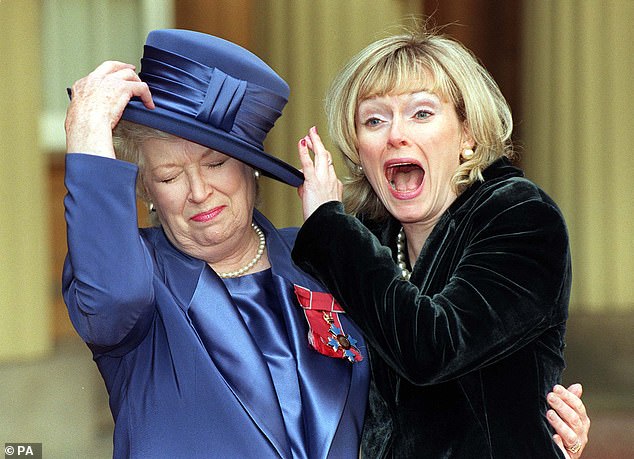 June Whitfield with her daughter, Suzy Aitchison, after being made a CBE in 1998 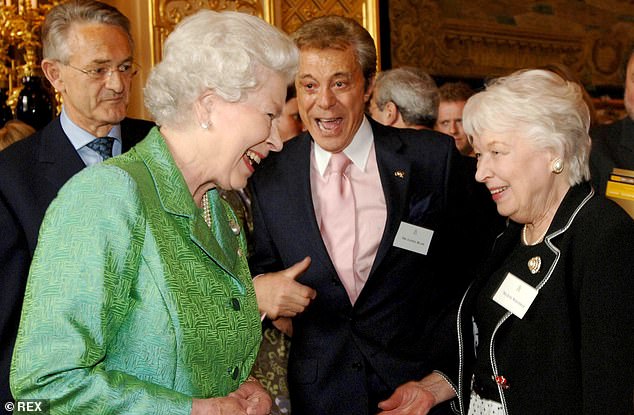 From her early radio appearances in the 1940s, through to her scatty antics on Absolutely Fabulous, Whitfield featured in more than 1,300 radio and television shows.

Stars such as Tony Hancock, Frankie Howerd, Ronnie Barker, Benny Hill, Bob Monkhouse and Tommy Cooper all clamoured to work with her.

She began her career on radio in 1946 and her big break came in 1953 in the successful radio comedy Take It From Here, in which she played long-suffering Eth whose lamenting catchphrase ‘Ooh, Ron’ – addressed to her hapless fiance – won her legions of fans.

In 1959 she made her first appearance in a Carry On film, in Carry On Nurse, and she went on to appear in three more movies in the franchise. In 1971 she recorded a version of Serge Gainsbourg’s Je t’Aime with Frankie Howerd, but the spoof was considered too risque and was banned by the BBC. 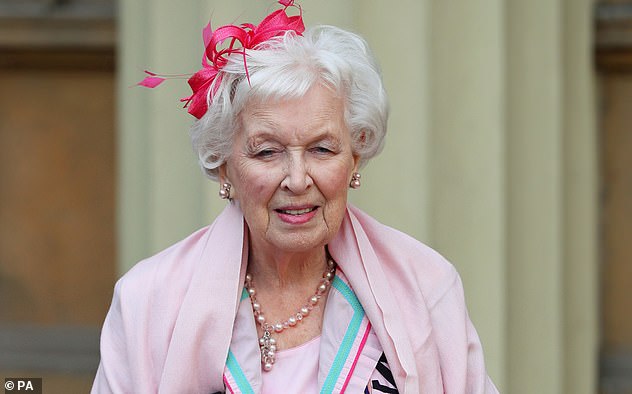 Actress Dame June Whitfield, pictured after receiving her damehood in November 2017, has died at the age of 93

She was later cast alongside Terry Scott in the hit BBC comedy Terry And June. The chemistry between the unflappable June and her hare-brained husband was so real that many viewers believed they were married in real life and the show attracted audiences of 15million.

Whitfield described herself as living ‘in the suburban corner, in real life and in the parts I’ve played. Very English, and nothing wrong with that.’

In 1992 she became an unlikely icon to a new generation of fans with her portrayal of Edina’s unworldly mother in the international hit Absolutely Fabulous. 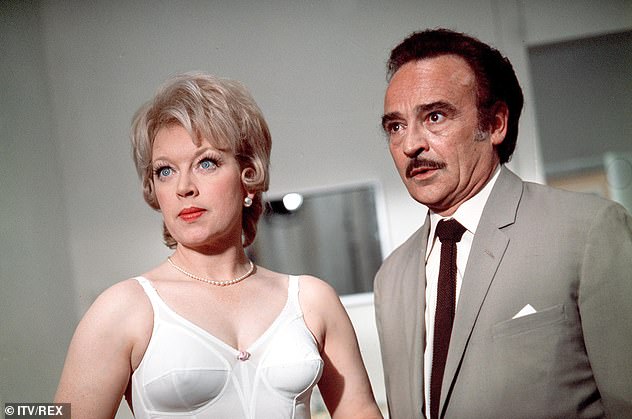 June Whitfield in Carry on Abroad with Kenneth Connor. The actress died peacefully in her sleep last night, her agent said

Originally scheduled to appear in just one episode, she went on to become one of the show’s most popular characters.

Julia Sawalha, who played her strait-laced granddaughter Saffy, said: ‘Thank you Dame June Whitfield for teaching me my craft with such grace and dignity.’