DAMIAN THOMPSON: If Tories renege on care cap they’ll be kicked out

How easy it is to forget that David Cameron was prime minister of a Tory government for a mere 14 months, between the general election of 2015 and the Brexit referendum.

Off the top of my head, I can remember only two things — other than the referendum — about ‘the second Cameron ministry’, as historians are already calling it.

One was Cameron and George Osborne’s calamitous Project Fear. The other was one of the most mean-spirited U-turns in British political history.

Just three months after taking office, the Tories tore up their manifesto promise to cap charges for residential social care at £72,000 from April 2016, a promise they had made ‘so that no one has to sell their home . . . giving everyone the peace of mind that they will receive the care they need’.

‘How easy it is to forget that David Cameron was prime minister of a Tory government for a mere 14 months, between the general election of 2015 and the Brexit referendum,’ writes Damian Thompson

The Government suddenly told pensioners and their families: ‘Sorry, but we can’t afford your peace of mind now.’ And yet, in the previous 12 months, they had waved through a foreign aid package that handed £1.3billion to the world’s 20 most corrupt states.

At the time, my 92-year-old mother was in a care home that she could afford only because she had sold her house.

I was livid, not least because it should be a central tenet of Conservative philosophy that those who work hard and pay taxes all their lives are, in turn, cared for by the state in their old age.

It should also be a matter of principle for the Tories that those who’ve raised children in a family home should be able to pass that home down the generations without it being torn from them to pay for their own care.

That’s why today, to my surprise, I’m quietly impressed by another Tory U-turn — by Health Secretary Jeremy Hunt. Speaking to social workers on Monday, he announced that the costs of families’ care bills will now be capped after all. 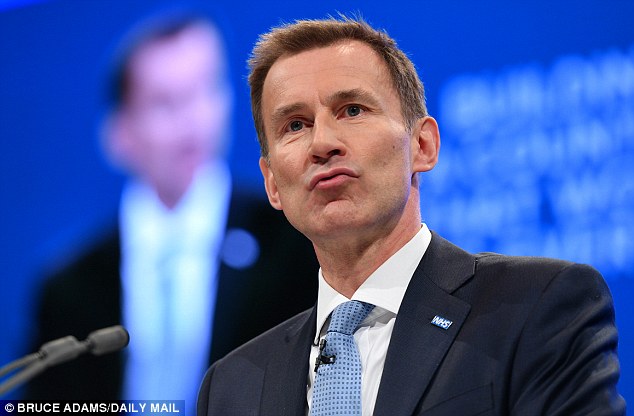 ‘The way that our current charging system operates is far from fair,’ he said, and it is causing ‘a great deal of distress’. We’ll be given the full details of how he plans to deal with this in an ambitious Green Paper this summer.

Note that it was Cabinet minister Mr Hunt who made the announcement. Back in 2016, it was Alistair Burt, then junior minister in charge of care, who tossed that manifesto pledge into the wastepaper basket.

So, what has changed? For a start, Mr Hunt’s job title. He is now Secretary of State for Health and Social Care.

Theresa May added this huge responsibility to his remit when she reshuffled the Cabinet in January. It was a long-overdue recognition that successive governments have patronised and ignored Britain’s fast-growing population of frail, old people.

Until now, the unspoken message from ministers has been: ‘Drink your tea, dear, have another biscuit and try to keep the noise down’ — and this at the very moment when the exploding cost of caring for the elderly threatens to bring public and private finances crashing down.

So, placing social care at the top of the Health Secretary’s agenda was a smart move. And the credit for that should go to Mr Hunt.

Is he a glutton for punishment? Managing the NHS is a nightmare; why add to it?

The answer is that, to his credit, he realises we can no longer separate health and social care. As he said this week, pensioners are too often seen as ‘tasks on a to-do list’ by a ‘rotating cast’ of helpers.

Last year, dementia overtook cardiovascular disease as Britain’s number one cause of death. Around 850,000 people suffer from it. My mother — happily still with us at 94 — is one of them.

I say ‘happily’ because, to the huge relief of my dear sister and me, she is happy. She’s also a very private lady, so you’ll understand if I don’t discuss her symptoms, which — inevitably — have become more severe since the Tories’ betrayal of people like her nearly two years ago.

Obviously, there is a lot more to Britain’s social care crisis than treating dementia. But it’s the most frightening and disorientating aspect of it.

On Monday afternoon, I was sitting in the lounge of my mother’s residential home, guiltily wolfing down the delicious sponge cake she showed no interest in eating.

Two things struck me. First, all the ghastly manifestations of dementia that were on display.

Sitting next to me was a handsome gentleman in his mid-60s, at a guess, who kept interrupting us with amiable, but noisy, non sequiturs. ‘When are you driving me home? It’s in that other city. Have you fixed it yet? What does your father say?’

A nonagenarian resident was also running through the details of her father’s travel itinerary, eight or ten times.

Second, the incredible pressure on the staff. They have to tailor their responses to the ‘performance’, as it were, of every resident. That requires diplomatic skills that would frazzle a Brexit negotiator.

Plus, they have to take people to the loo. That’s a diplomatic challenge, too, since the old lady who tells you she ‘has to go now’ may only just have returned from a visit that required two staff and a mechanised ‘toilet hoist’.

None of this comes cheap. My mother’s care costs more than £1,000 a week. If her mind were unaffected by dementia, the bills would be lower.

Does the Government realise what a cruel choice dementia sufferers and their families face? Paying ruinously expensive costs — or you risk ending up in one of the large ‘granny farms’, as they’re known, whose callous and lazy treatment of old folk was exposed by the Mail last year. 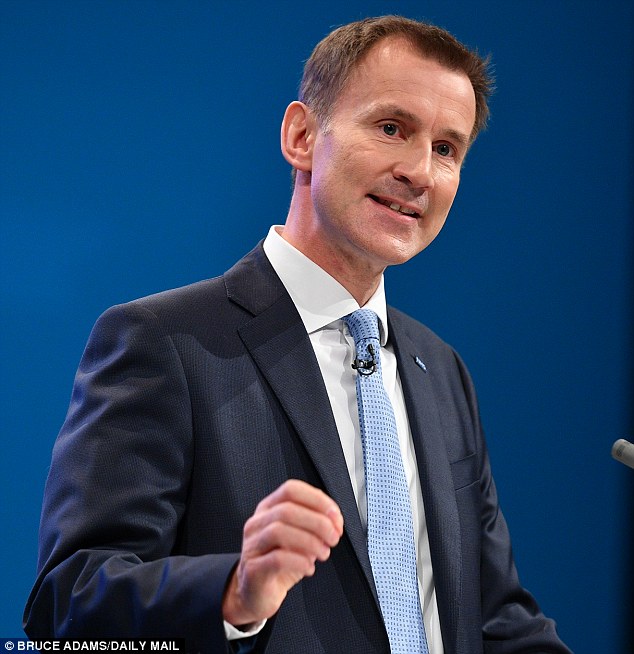 Jeremy Hunt has ‘woken up’ to the problems faced by dementia sufferers and their families, writes Damian Thompson

The good news from this week is that, at last, a Health Secretary has woken up the problem.

As Mr Hunt said: ‘If you develop dementia and require long-term residential care, you are likely to have to use a significant chunk of your savings and the equity in your home to pay for that care. But if you require long-term treatment for cancer, you won’t find anything like the same cost.’

Did that mean that the Government would pay for everything above its cap on the care home bills? His reply was an unequivocal ‘yes’.

He didn’t tell us at what level the cap will be set — and, therefore, we don’t know how much it will cost the taxpayer. We’ll find out this summer in that Green Paper.

The only thing we know for sure is that the sums of money involved will be eye-watering.

So, we need to start thinking about where to find the cash.

I mentioned foreign aid. I’m serious about diverting it so that we can look after our elderly in this country.

Alas, it’s not practical to explain the options to my mother. She is the most compassionate person I have ever met, who spent her long widowhood visiting the sick in hospital. But I know her views on handing over piles of aid money that is too often wasted on projects that don’t work or trousered by corrupt despots in faraway countries.

Obviously, cutting foreign aid waste won’t be enough. Which means, perhaps, the social care crisis will finally force Britain to dismantle the overmanned, public sector bureaucracy that siphons away money from the needy.

It’s not sufficient for us to just wait for the Green Paper. The debate must begin immediately and it mustn’t be hijacked by lobbyists.

This time round, the Government must not be allowed to kick the issue into the long grass. If they try, they’ll be out of office at the next election.

In which case, the fate of old people will lie with a Corbynite government under which care homes will be run for the benefit of heavily unionised staff.

That doesn’t bear thinking about. I just hope that my beloved mother isn’t around to see it.