DAN HODGES: Can Mrs May really count on the Beast of Bolsover to save her skin?

Dennis Skinner – the infamous ‘Beast of Bolsover’ whose vicious barbs at his political opponents have seen him ejected from the House of Commons on numerous occasions – is the scourge of the Tory Party.

And yet if Downing Street’s new Brexit strategy goes to plan, he could be the man who is about to save Theresa May’s premiership.

It’s a high-risk strategy. A bit like crossing Niagara Falls on a tightrope in the middle of a hurricane with a dozen sticks of burning dynamite in your pocket is high-risk.

But as Mrs May arrives in Birmingham for what many of her colleagues are predicting will be her last party conference as Prime Minister, No 10 officials view it as the only strategy she has left.

The Save Theresa plan has three components, each containing an increasing level of complexity – and, in the eyes of some members of the Cabinet, implausibility.

First, she disinters Chequers. Second, she convinces the bulk of her Brexit-sceptic backbenchers to embrace her deal. And finally she drives it through the Commons with the backing of Dennis Skinner and his pro-Brexit comrades in Labour.

‘It’s a bizarre plan,’ one Minister tells me. ‘Why are we reaching out to people who are opponents, rather than concentrating on our own MPs?’

A Labour whip is even more sceptical. ‘They’re mad,’ he says. ‘Chequers is dead. She’s not getting it through with Labour votes.’

Maybe. But there’s a fine line between madness and genius. And Mrs May is about to demonstrate to the nation on which side of it she sits.

Salzburg was widely perceived to have marked the moment the EU decisively rejected her Chequers proposal. But Downing Street takes a different view.

‘They realise they went too far with the ambush and the rhetoric,’ a No 10 official tells me. ‘They are going to offer us a deal.’

This may seem like wishful thinking. But there are signs of reflection in Brussels. ‘It ended up in an accident where both the EU and Theresa May seemed to drift away,’ Dutch PM Mark Rutte admitted last week. ‘That’s not OK, so we have to bring it back together.’ 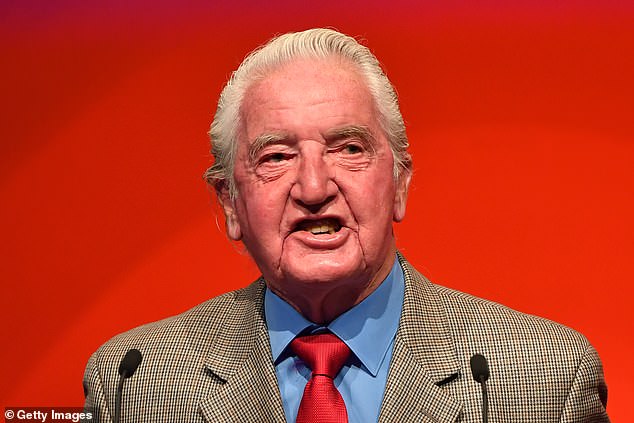 If Downing Street’s new Brexit strategy goes to plan, Dennis Skinner could be the man to save Mrs May’s premiership

Breathing life back into the Chequers corpse is actually the easy bit. ‘OK, I think she’ll get something from the EU,’ a Cabinet Minister concedes. ‘But then what?’ In other words, how does Mrs May implement stage two of her strategy, namely getting Chequers past her hardcore Brexit backbenchers?

The answer, according to her team, is to dramatically recast the narrative surrounding the negotiations. ‘Imagine this scenario,’ one explains.

‘She gets a deal, when everyone said it was impossible. The EU are backing it, and every major business is pushing for it as the only way to safeguard jobs and investment. She then says to the Brexit rebels, “This is your moment. We’re nearly out. You’ve been campaigning for this your whole life. Corbyn’s waiting to snatch it all away from you. And all you have to do is take one final step through that door.” ’

It’s a compelling vision, one that could well sway a number of waverers. But Mrs May knows it will not be compelling enough.

The Prime Minister has crunched the numbers and is aware that even in the best-case scenario, she is going to come up short of the votes required to get Chequers through the Commons with Tory votes.

‘We think we can get the European Research Group rebels down to about 15 or 20, but that’s the floor,’ a No 10 insider concedes. Hence the final stage of her plan – the appeal to Skinner and his colleagues.

Corbyn’s offer to back a ‘sensible deal’ in his conference speech was cynical politicking.

Whatever the Prime Minister offers, he will oppose. But Tory Chief Whip Julian Smith has informed Mrs May he believes approximately 20 Labour MPs could be ‘in play’ to back a Chequers-style deal.

Seeing through the Jezza illusion

Perceived Westminster wisdom is that Jeremy Corbyn had a good a week. His conference speech won plaudits, he avoided a Brexit car crash, and the various Labour factions headed home without having come to blows.

But beneath the veneer of unity, things are very different. ‘This was the final chance for Jeremy to head off a split and he blew it,’ says one MP.

I’m told that, coming into conference, Labour’s modernisers were demanding three things – a clear commitment to a people’s vote, an apology for the anti-Semitism crisis, and an end to the threat of deselection. They left Liverpool with none of them.

‘There’s no commitment to a referendum. There’ll be no Election. And if Chequers is blocked, Corbyn’s already said he wants May to go back and renegotiate. It’s a joke,’ a Shadow Minister complains.

The applause has already faded. The next sound you hear will be Labour fracturing.

And a delicate process of reaching out to them has begun.

‘I’ve had a face to face meeting with her,’ says one Labour MP, ‘and I said, in the right circumstances, I might help her out.’

In reality, I’m told there are approximately 50 Labour MPs who could – if a number of conditions are met – defy their own whips and vote through a deal.

At their core is the posse of 15 resolutely pro-Brexit Labour rebels who voted against joining the European Economic Area in June.

Then there’s a second tier who are seeking additional assurances on a range of issues, including immigration, workers’ rights and frictionless trade to protect local manufacturing.

And finally there is a third group who simply believe that if May is defeated, and it results in an early election, they will lose their seats in a pro-Brexit backlash.

‘If there was a Brexit election tomorrow, we’d be annihilated in the North,’ one explains.

But, in truth, May’s need to minimise the rebellion on her own benches limits her capacity for Faustian deals with external political foes.

Those Labour MPs considering helping the PM would find themselves under unremitting attack from both the Corbynites, who see a Brexit implosion as their route to power, and Modernisers driving for a second referendum.

‘It would mean the end of their careers,’ one Shadow Minister warns. And then there are the old, engrained tribal loyalties.

‘Dennis Skinner has fought the Tories all his life,’ one MP tells me. ‘He’s not going to throw any Conservative Prime Minister a lifeline.’

Some of his colleagues are hoping he may have to cast it only halfway.

‘It would be best if she could get enough of us on board so we only have to abstain, rather than vote with the Government,’ one Labour MP says. ‘That would be easier to sell to my members.’

From the Prime Minister’s perspective it’s a sell that is going to have to be made. Her premiership is now coming down to simple maths.

For every Tory MP who opposes any deal, she will have to find a Labour MP to replace them. A Dennis Skinner for a Jacob Rees-Mogg. A Caroline Flint for a Boris Johnson. A John Mann for a David Davis.

Besting her opponents in Brussels and on her own backbenches will not be enough. Mrs May now has to tame The Beast.