DAN HODGES: Loyal lieutenants are starting to whisper… Can we cut Corbyn out of Corbynism?

This weekend the Corbynites are thinking the unthinkable. They are beginning to actively discuss among themselves whether their leader has now taken them as far as he can go, and whether there is a way of recasting Corbynism so that it does not include Jeremy Corbyn.

The catalyst for this sacrilegious introspection has been seven days that have seen the implosion of Corbyn’s moral, political and – crucially – parliamentary authority. What happens in the House of Commons chamber is meant to be of interest to only a small, self-obsessed Westminster clique. Maybe it is. But that clique contains some of the Labour leader’s most loyal supporters. And last week they were rubbed emotionally raw by the repeated obligation to stand by their man.

Corbyn appeared in the House on five major occasions. Each one was a personal catastrophe, and a tortuous trial for his allies. Twice he took to the Dispatch Box to try to hold Theresa May to account over the bombing of Syria. She destroyed him in two of her strongest performances since becoming Prime Minister. A day later he returned, to try to outflank her on her decision not to seek parliamentary support for the bombing. But in the process he tied himself in procedural knots, sowed confusion among his own MPs over which way they should vote, ended up whipping against his own motion, and still managed to lose the debate.

Corbynites are beginning to actively discuss among themselves whether their leader has now taken them as far as he can go, and whether there is a way of recasting Corbynism so that it does not include Jeremy Corbyn

A day later he appeared at PMQs with the Prime Minister and the Government on the ropes over the Windrush scandal. For once even moderate MPs were willing him to land a blow. Which he did. On himself. ‘Who had ordered the destruction of the landing cards?’ he asked. ‘The last Labour government,’ Mrs May responded coolly. Yet another opportunity to hold the Government to account was lost.

But the defining moment came in Tuesday’s dramatic debate on anti-Semitism. As MP after MP described in harrowing detail their treatment at the hands of the thuggish army of Corbynite red-shirts, Corbyn rose and walked out, literally turning his back on those recounting their contemporary experience of an ancient hatred.

From my position in the parliamentary press gallery, I looked down at the Labour front bench. It contained some of Corbyn’s longest-standing supporters. They looked shell-shocked by what they were hearing. And, to their credit, utterly ashamed. Even his most battle-hardened parliamentary foot soldiers have become wearied by the dark-circus that surrounds The Absolute Boy.

If there is one thing harder than confronting Corbynite cultism, it is participating in it. And a number of key lieutenants are simply exhausted at having to defend wave after wave of anti-Semitism, Putin apologism, and Brexit opportunism.

Then there is the fact that since the Election, political horizons within the Corbyn camp have altered dramatically. A year ago the pinnacle of their ambition was to embed change within the Labour Party. Now they believe – rightly – that they have a once-in-a-lifetime opportunity to actually enter government and impose radical change upon the nation itself. And when they look at Corbyn, they increasingly see someone encumbered with too much political baggage to carry them over the line.

There is also the human factor. Deities cast a long shadow. On Tuesday, the much maligned Diane Abbott gave one of the best speeches of her frontbench career. In a statement on Windrush, she produced a composed, forensic and highly personal evisceration of the Government’s shameful disenfranchisement of an entire generation of black Britons. But all that was remembered was her insensitive and blinkered attempt to defend her leader in winding up the anti-Semitism debate. Rebecca Long-Bailey is being eyed up as a potential replacement

The reality is Corbyn is sucking up too much political oxygen, and his colleagues are now recognising it. Over the past few weeks John McDonnell has begun to subtly – though not too subtly – construct a cordon sanitaire around his leader. He has adopted a clearly distinct line on issues as diverse as the Skripal poisoning, Brexit, Assad’s responsibility for Douma and engagement with the City.

He has also begun to expand the range of his ‘Corbynsplaining’ – the technique by which he recasts Corbyn’s views in his own words, always carefully prefixed with ‘what Jeremy is saying is…’ But thinking the unthinkable is not the same as doing the unthinkable. And ironically, it’s here that the Corbynites run into precisely the same problems as their moderate colleagues.

One is that, as yet, they do not have a ready alternative. McDonnell is the obvious candidate, but there are questions over his health, as well as whether party activists will stomach yet another male, pale and stale leader.

Rebecca Long-Bailey has been road-tested for the role but is not yet seen as ready. Angela Rayner was another hope but has since broken from the Corbynites, and is now regarded as a hostile. Clive Lewis’s name has been mentioned, but he broke with Corbyn over Europe, though has since made efforts to crawl back into the fold.

A further option is Emily Thornberry, despite questions remaining about the extent of her devotion to the Corbynite project. Another issue confronting the Corbynism-Without-Corbynites is how to make a change without shattering the faith of the true believers. Along with everyone else in politics, they are unclear in their own minds about how much of Labour’s support rests on a genuine desire for radical change, and how much is the product of a deranged personality sect.

The consensus appears to be that if a decision was made to opt for a change, it could be sold to Labour members so long as it enjoyed the support of the influential pro-Corbyn activist group Momentum. Which is why recent signs of tension between Momentum leaders and Corbyn’s office are significant. 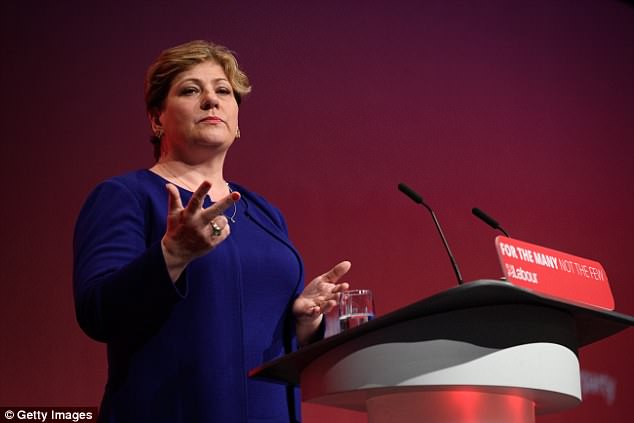 A further option is Emily Thornberry, despite questions remaining about the extent of her devotion to the Corbynite project

As are issues of timing. Just as Labour moderates hopes were dashed by Corbyn’s dramatic over-performance at the General Election, so his former allies are carefully eyeing the local elections. They recognise that major Labour gains will probably recast the political narrative and remove any prospect of a change at the top in the short to medium term.

So for now, these heretical musings may very well remain just that. But the alt-Left advance is no longer simply wearing away its opponents. The football-terrace chants of support are beginning to stick in the throat. And even some of St Jeremy’s staunchest allies are finally recognising the indefensible cannot be defended indefinitely. Life without Corbyn is no longer unthinkable, not even to the Corbynites.