It is The Guardian – inevitably – that has been leading the sneers. ‘As millionaires inside and outside of government lean on us to stop working from home, what are we really missing?’ the bible of woke Britain intoned last week.

‘If you want to feel like you’re in an office again, just wad a packet of wet wipes down your toilet and, at 4pm every Friday, throw away all the milk that’s left in your fridge. That’s all you’re really missing.’

All you’re really missing so long as you’re not one of the 1,600 Costa coffee workers who were told on Friday that they’re about to be dumped on to the dole queue. Or the 3,000 staff of Pret A Manger who were handed their P45s a week earlier.

A Costa Coffee store is pictured above. 1,600 Costa workers were told on Friday they would lose their jobs. As ever, there’s an element of raw snobbery in the glee with which these redundancies have been greeted

But, hey, as the liberal Left’s edgy new mantra goes: ‘Who wants to die for a Pret sandwich?’

Except it’s not just going to be the baristas and sandwich-makers who feel the pain.

According to the Confederation of British Industry’s (CBI) most recent assessment, last month’s perceived recovery on the High Street was a dead-Covid bounce. Britain is now heading for its worst job cuts since the financial crash.

The CBI’s quarterly employment balance – which measures the number of retailers laying off and hiring staff – has dropped to minus 45, down from minus 20 in May. 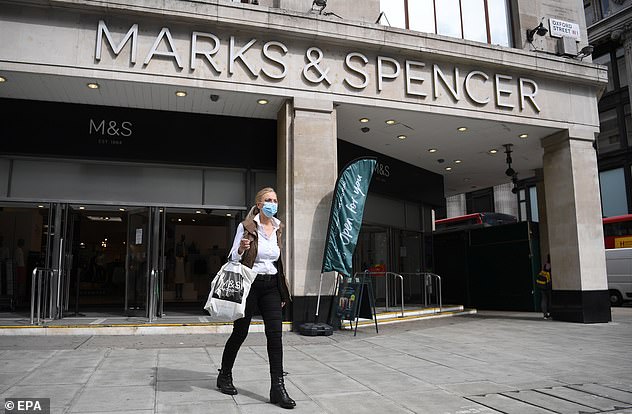 The CBI’s quarterly employment balance – which measures the number of retailers laying off and hiring staff – has dropped to minus 45, down from minus 20 in May. But liberal Britain couldn’t care less. An M&S store is pictured above

As ever, there’s an element of raw snobbery in the glee with which these redundancies have been greeted.

As one MP pointed out to me: ‘The service sector jobs are the wrong sort of jobs. The kids of Guardian leader writers don’t rely on this sort of work. Maybe for a summer job. But that’s it.’

There’s also some not-so-subliminal racism at play. As one Minister said: ‘The problem is a lot of these workers are migrants. So no one gives a s*** about them.’

And, of course, there is the grand conspiracy theory. None of this really matters. UK plc will absorb these losses and adapt. All that’s really at stake are the profits of the big inner-city landlords, who stuff the Tory Party’s coffers with gold. Some of whom – nudge, nudge, wink, wink – are also Russians.

In our Covid-obsessed world, where legitimate concern about a dangerous virus has been lost beneath a form of collective mass hysteria, this tin-foil progressive populism is gaining some traction.

But it obscures the real agenda behind the thinly veiled rejoicing over the impending collapse of the service-oriented British economy.

In the wake of the financial crash, a new concept – ‘disaster capitalism’ – was on the lips of every liberal academic and commentator.

The theory posited that this massive shock to the global economic system would be leveraged to open the door to more free-market deregulation and a full-blown assault on social protection.

Now many on the Left see Covid as the opportunity for payback. A chance to unleash ‘disaster socialism’. Or, for the more moderately minded, ‘disaster Milibandism’.

As The Guardian again helpfully explains: ‘Since the pandemic began, societal changes that were supposed to be impossible have happened with relative ease. Workers were sent home overnight and it now seems that many can do their jobs, if not fully remotely, then at least partially from home.

‘Already, many people are talking of moving away from big cities.’

‘Societal changes that were supposed to be impossible’ is actually code for ‘We’re going to use Covid to take a hammer to capitalism in a way we were prevented from doing by the voters at the 2015 and 2017 and 2019 Elections’.

In the eyes of many on the Left, the new normal can now be Jeremy Corbyn’s normal.

And if the dole queues have to swell by a few million to usher in this new utopia of home-working and locally sourced latte, so be it.

But to be fair to the liberals, they’re just trying to ensure a good crisis doesn’t go to waste.

What’s inexplicable is the way Boris Johnson and his Ministers are giving them a free hand to commit their economic and social vandalism. Last week was billed as the week Boris would launch his drive to get Britain back to work.

Until, at Thursday’s lobby briefing, when the Prime Minister’s spokesman proudly announced: ‘There has never been a back to work campaign.’

Which begs two questions. Why did No 10 brief that there was? And if there’s no such campaign, why the hell isn’t there?

I’m told there are two reasons the campaign was shelved. One was fears within Downing Street that Boris’s plea would simply be ignored.

‘They were worried he’d make the appeal and the figures would show no one took any notice,’ a Minister reveals. ‘Which is kind of what happened anyway.’

Another is that a survey being undertaken by the Cabinet Office within Government departments has revealed it will take months for them to return to pre-Covid staffing levels.

‘There are officials in No 10 who are only working a three-day week,’ a Minister tells me, ‘and we’re supposed to be telling the country to get back to work?’

At the moment the plan is for the hapless Business Secretary Alok Sharma to be rolled out next week to order the nation to pull its socks up. Which would be fine if the Government didn’t seem so intent on yanking them down again.

Last week it was reported that a wave of tax rises are being considered to ‘pay for the Covid crisis’.

And as the TUC pointed out, the Government’s own Covid regulations mean even if workers do want to return, only 50 per cent of them can do so because of social distancing restrictions.

The argument of those on the Left embracing ‘disaster socialism’ is that what we are seeing is not just an economic recalibration but a moral reckoning.

The same market forces that consumed Britain’s mining communities and manufacturers are now simply being unleashed as avenging angels on her blue-chip corporations. Which would have some merit if it wasn’t the State that had ordered every business to close, and everyone to stay at home on pain of arrest.

It’s the State that is still ordering British business to make a living while literally keeping its customers at arms’ length.

And it’s the State that’s continuing to maintain the fiction of the sustainability of home-working via the furlough scheme. 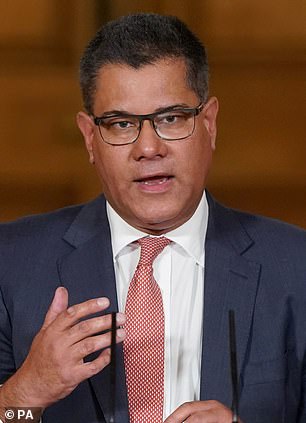 But that scheme will not be in place much longer. And when it goes, many of those basking in the luxury of whether to work from home or the office may come to resemble those pondering which armchair to recline in on the stateroom of the Titanic.

Last week I was in a pub much in favour with the liberal London elite. On the surface it seemed to be flourishing. Then the landlord revealed the truth. ‘Before Covid I was clearing £33,000 a week. Now it’s £11,000.’

It will start with the sandwich shops. Then it will move on to the pubs and restaurants and clubs. Next will be the theatres and cinemas and museums.

And so it will roll down, a slow but steady cascade of insolvency and redundancy.

‘What people don’t understand is there’s a domino effect going on,’ an exasperated Minister explains, ‘and it won’t just stop in Central London. Eventually it will impact everyone.’

The devotees of ‘disaster socialism’ know this. But they don’t care. Aided and abetted by a timid, rudderless Government, they intend to seize their moment and leverage the Covid crisis into the crisis of capitalism that they have craved for so long.

It started with the coffee shops. But if the disaster socialists get their way, that won’t be where it ends.