Dancing On Ice’s Brianne Delcourt and Kevin Kilbane have welcomed their second child.

The ice dancer, 41, and her former footballer husband, 45, confirmed they had welcomed their baby girl on Friday morning in Canada.

They told OK!: ‘Our beautiful baby girl born 8:37am ET. We can’t wait to take you home to meet your sisters.’

Baby coming soon! Kevin Kilbane sweetly cradled his wife Brianne Delcourt’s baby bump as they countdown the arrival of the tot, with Kevin remarking: ‘The wait is nearly over’

The couple announced in November that they were expecting their second child, as they also share Olivia, 14 months.

Brianne is also a mother to daughter Gracie, five, while former footballer Kevin also has two daughters – Elsie, 18, and Isla, 17 – from his previous marriage to ex-wife Laura.

Last week, the happy couple were eagerly counting down to the little tot’s arrival, with Kevin remarking: ‘The wait is nearly over’.

He shared a sweet lakeside snap with Brianne and paid tribute to his wife as he praised her ‘strength and character’. 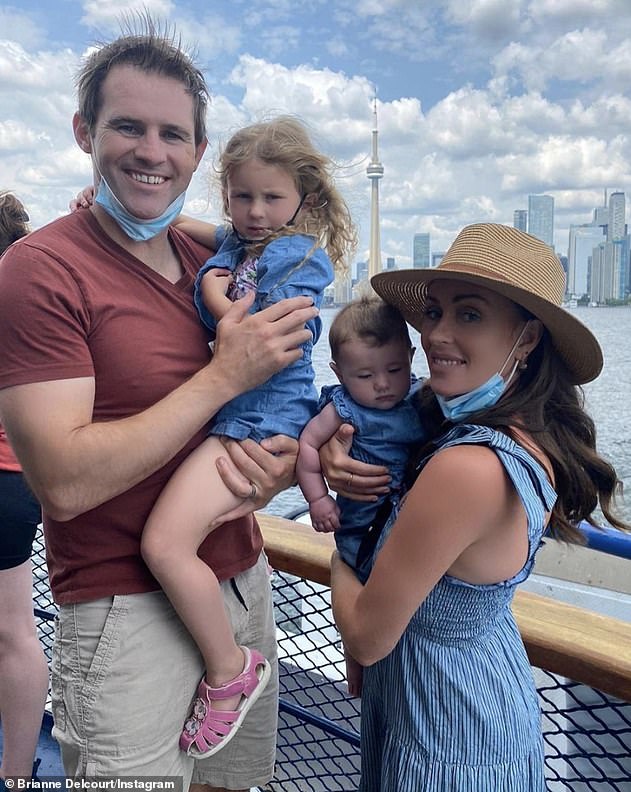 Family: Brianne is already mum to her daughter Olivia Mai, 14 months, and Gracie, five, while former footballer Kevin also has two daughters – Elsie, 18, and Isla, 17 – from his previous marriage to ex-wife Laura

The image saw Kevin standing behind Brianne and gently holding her bare bump as they both posed for the camera.

While the Irish star kept things casual in a white shirt and khaki trousers, Brianne looked glamorous in a navy lace number which showed off her stomach and legs.

Captioning his post, Kevin penned: ‘The wait is nearly over. Baby K arrives shortly to add to our crazy house..

‘To my incredible wife @brianne_tv for all The worry, the pain, the sleepless nights, the tiredness, the sickness, bloody Covid, the hospital visits alone, too many tests to mention, the endless wait for news of tests, the life & career changes you’ve made, the guilty feelings for lacking time with your babies (which isn’t true) and feeling every emotion possible every day.

Sweet: Alongside a stunning lakeside snap of the happy couple, the former footballer, 45, paid tribute to his ex Dancing On Ice star wife, 41, as he praised her ‘strength and character’

‘Your strength & character amaze me. You’re the best mother there is. You look as beautiful as you ever have. I am so proud to spend the rest of my life with you. You got this girl! #forevershowgirl❤️❤️x.’

Meanwhile, Brianne shared a gushing caption as she admitted that she couldn’t wait to meet her baby, who they called ‘Baby K’.

She wrote: ‘Can’t wait to meet you little one. Thank-you for choosing me to be your momma. My Baby ~K~ we all love you already.

‘You are definitely taking after your daddy already, with those kicks almighty ..wow! The anticipation is killing us now! We just want to meet our precious little girl.

Back in November, Brianne admitted she thought she was having a miscarriage in the early stages of her pregnancy due to a haemorrhage.

The professional skater ran into complications during her first trimester and told how the bleeding was ‘scary and worrying’ as she also discussed her excitement at having another child.

She told OK! of her health scare: ‘We’d never heard of a haemorrhage in pregnancy so when you’re told that you think the worst. 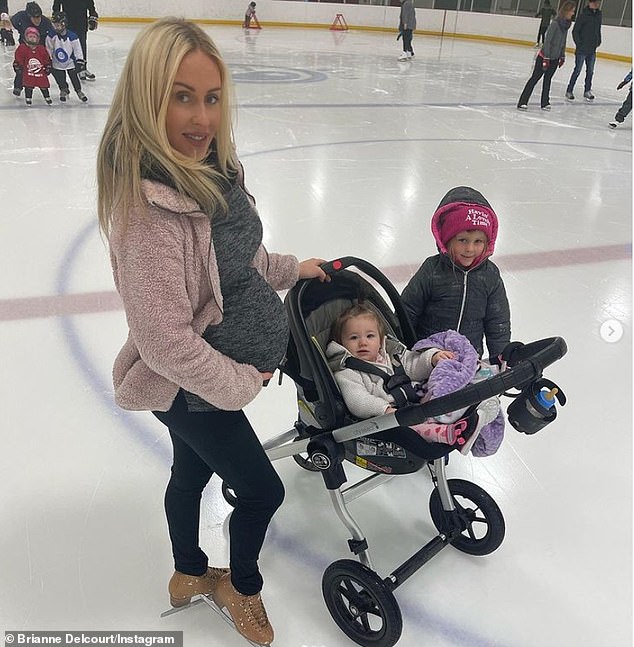 Tribute: ‘Your strength & character amaze me. You’re the best mother there is. You look as beautiful as you ever have. I am so proud to spend the rest of my life with you. You got this girl!’

‘It was an extremely worrying time. I was bleeding for a week so I went to see a doctor. Automatically we though something was wrong or that I was miscarrying.’

She then went for a follow-up appointment and was told it had got bigger while experiencing severe pain.

‘They put me on bed rest but that only lasted a day as it’s pretty hard to do nothing when you have two kids. It was an extremely worrying time and was before the 12 weeks so it was a really scary.’

She added that the haemorrhage had cleared itself up and that it may have been caused by an internal injury or disruption. 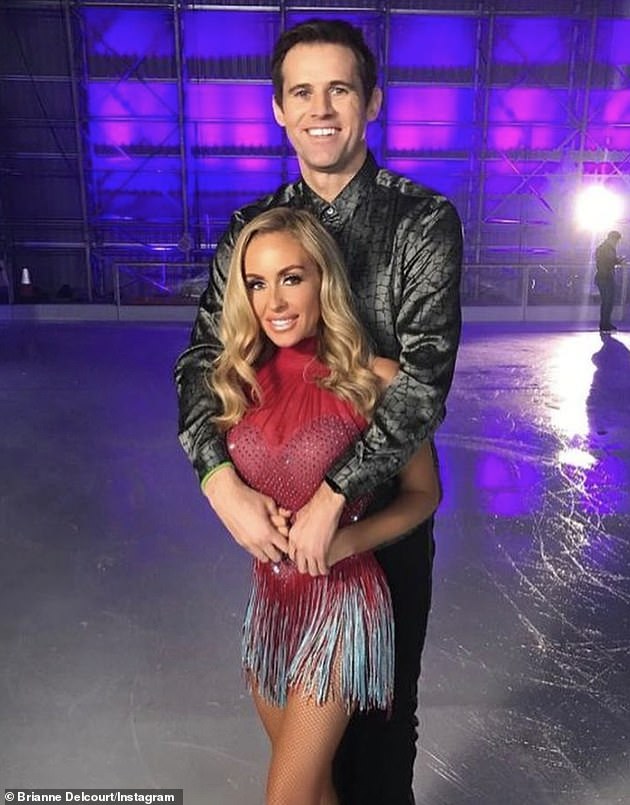 Worry: Back in November, Brianne admitted she thought she was having a miscarriage in the early stages of her pregnancy due to a hemorrhage

Discussing more positive aspects of her pregnancy she told how her five-year-old Gracie noticed that her tummy had got bigger and was delighted when they told her the happy news.

She then joked that once the baby arrives that they will be ‘living in a mad house’ as they have recently bought a puppy too.

The pair couldn’t wait to find out the gender and were thrilled to find out it was a little girl.

Brianne and Kevin first met in 2019 when they were paired up for the 2020 series of Dancing on Ice.

The couple confirmed they were expecting their first child together in September and also revealed at the time they had tied the knot, 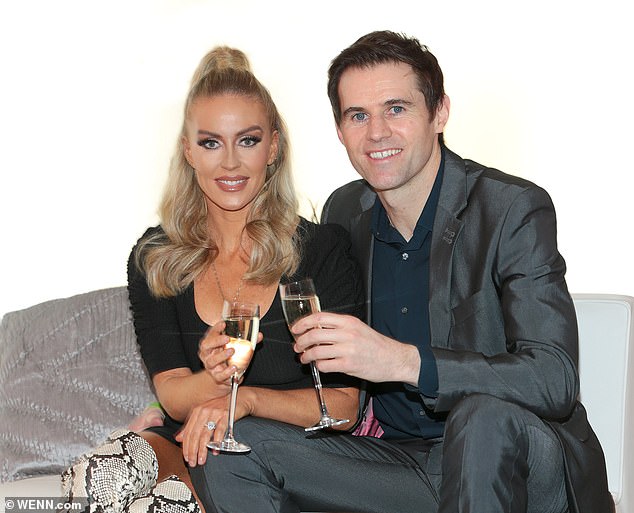 Love: Brianne and Kevin married at Bonnie View Inn in Haliburton and were unable to have any guests with them from the UK due to Covid-19 safety regulations