Dani Dyer and her beau Sammy Kimmence were reportedly able to celebrate his first Father’s Day together after his sentencing was delayed.

In April, Kimmence, 25, made a last-minute change to plead guilty to scamming two men out of £34,000 and was due to appear back at Portsmouth Crown Court to hear his sentence on June 11 – after being told he could face jail time.

A source has now claimed that because of the date being pushed back amid the pandemic, the parents got to soak up the day with their son Santiago, five months.

Family: Dani Dyer and her beau Sammy Kimmence were reportedly able to celebrate his first Father’s Day together after his sentencing was delayed (pictured with baby Santiago in April)

They told The Sun: ‘Shortly before he was informed that his sentencing was going to be delayed. The pandemic has done this to a number of cases in court.

‘The delay meant he was able to spend this special day with Dani and their baby son Santiago.

‘Sammy put his hands up and admitted his crime and he will take his punishment when the time comes.’ 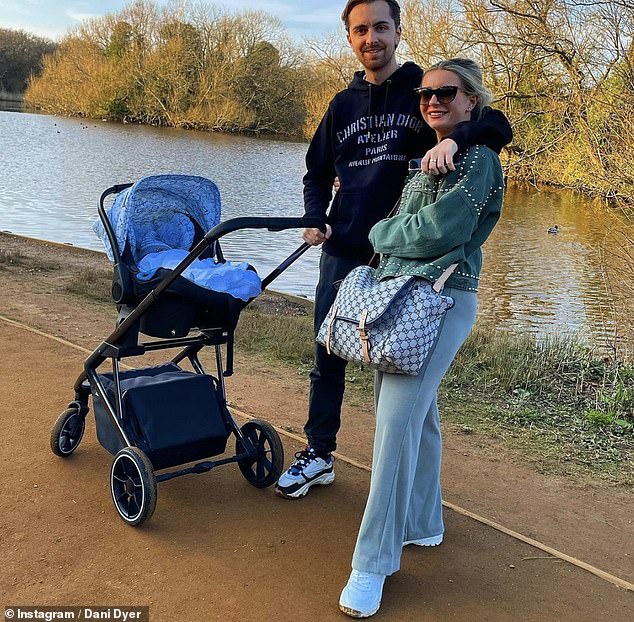 Waiting: In April, Kimmence, 25, made changed his plea guilty after scamming two men out of £34K and was due to appear back in court on June 11 (pictured with Dani and Santi in March)

At the time of his last court appearance, Kimmence was granted conditional bail until the hearing of his case on June 11 where he was at ‘risk of a custodial sentence’.

Earlier this year, Dani reportedly vowed to stand by her boyfriend as he faces jail after pleading guilty to fraud.

In a statement, the star’s representative confirmed they are ‘still together’ after he appeared at Portsmouth Crown Court and admitted duping two men out of £34,000.

When asked whether they were still in a relationship, Dani’s representative told The Sun they are ‘still together.’

A source close to the star, who welcomed her first child with him in January, added: ‘She’s vowed to stand by him, he’s the father of her baby.’ 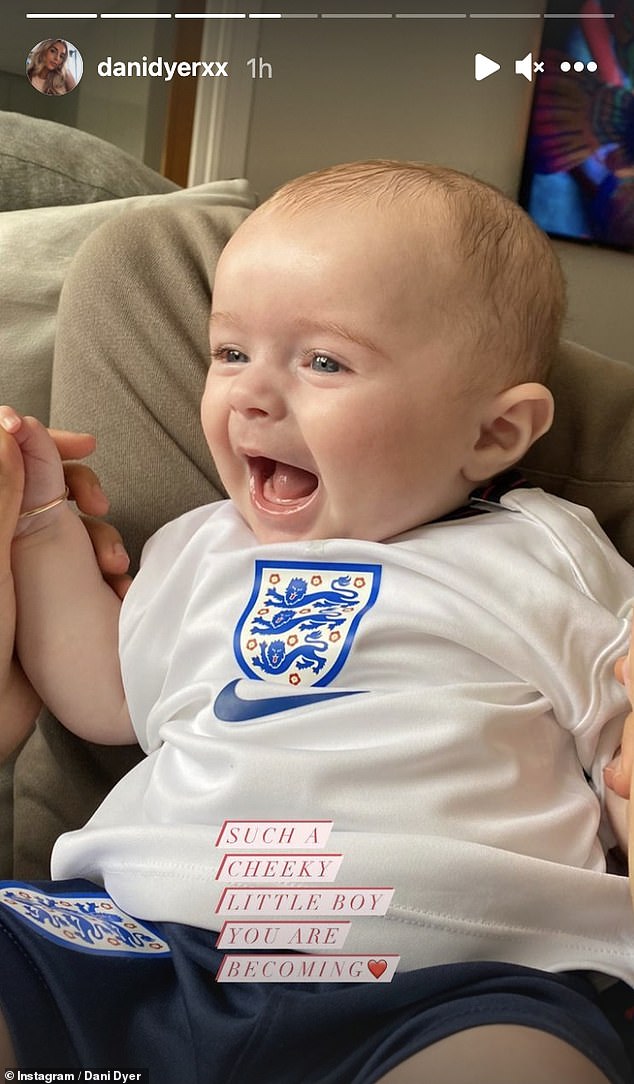 Parents: The couple, who rekindled their relationship after Dani’s winning stint in the Love Island villa, welcomed their first child Santiago in January (pictured on Tuesday)

MailOnline contacted representatives for Dani Dyer for further comment at the time.

It comes after Kimmence was warned in April that he faces jail after he admitted scamming two elderly men out of £34,000 by posing as a financial investor.

The entrepreneur duped Peter Martin, 90, and Peter Haynes, 80, between 2016 and 2018 by persuading the vulnerable pensioners to allow him to invest their money.

The 25-year-old’s victims were said to have been clients at a legitimate investment company, S&S Trading Ltd, where Kimmence previously worked.

A previous hearing was told Kimmence took the clients on when the business stopped operating, falsely claiming he was authorised to provide financial services.

Now Kimmence, who had denied all the charges and pleaded not guilty only last week, faces a possible prison sentence after a last-minute change of plea. 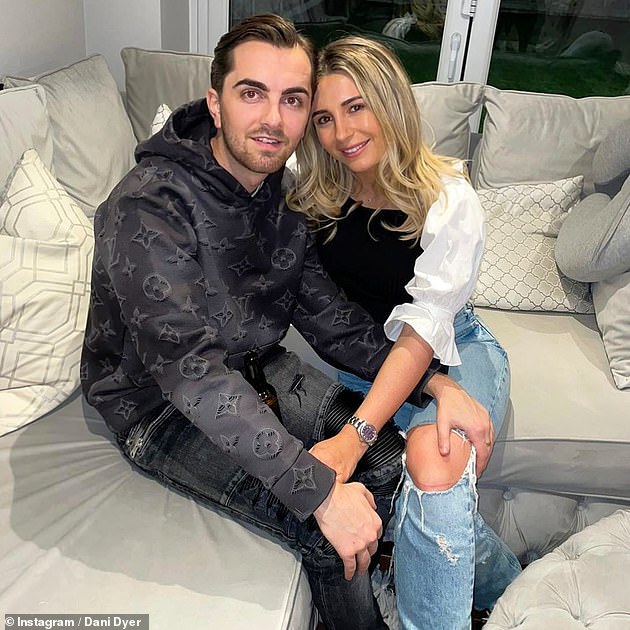 Proud parents: A source has claimed that because of the sentencing date being pushed back amid the pandemic, Kimmence got to spend Father’s Day with his family (pictured in April)

Kimmence, appearing at Portsmouth Crown Court, Hampshire, as his trial was expected to start, pleaded guilty to five counts of fraud, totalling £33,919.

The judge warned him his offences were so serious they crossed the custody threshold and he could be sent to jail.

Standing in the dock, Kimmence, dressed in a black suit with a blue tie, spoke only to confirm his name and plead guilty to each charge.

The court heard Kimmence, who announced the birth of his and Dani’s son Santiago in January, used one of his victims’ bank cards to withdraw more than £1,200 for himself and also racked up credit card charges of more than £1,300.

Defending, Craig Harris asked for a pre-sentence report to be made and said: ‘He is a relatively young man of previous good character, the offences go back into his late teenage years.

‘This is a case that crosses the custodial threshold but might be within a range which I argue could be suspended.’

He added: ‘Quite a lot has gone into this young man’s life in the last few years. He is seeking to reimburse the losses he has caused so some time is also needed to allow him to do that.’

The court previously heard how Mr Haynes was diagnosed with Alzheimer’s last year and has moved from Okehampton, Devon, to live closer to his daughter in Leeds. 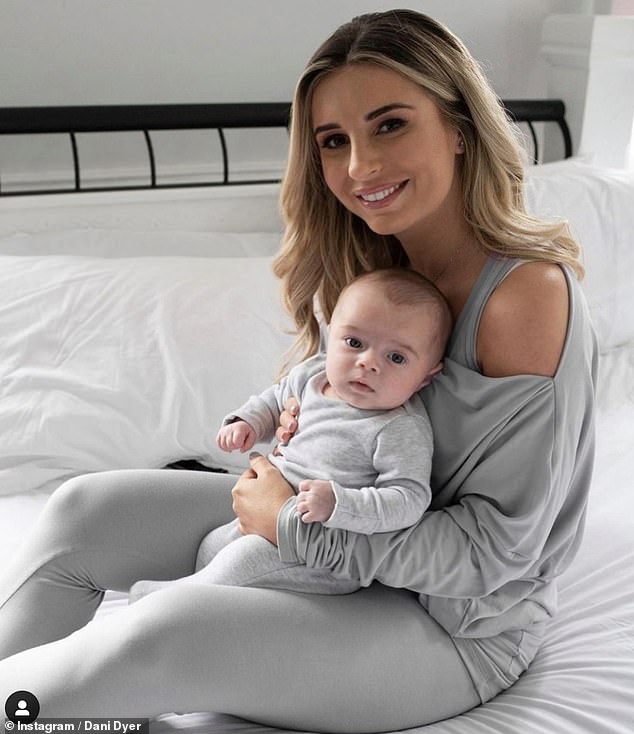 Still together: Earlier this year, Dani reportedly vowed to stand by her boyfriend as he faces jail after pleading guilty to fraud (pictured with her son in May)

Adjourning the hearing for sentencing, Recorder Nicholas Haggan, QC, said: ‘The offences to which you have pleaded guilty are serious offences, it’s accepted they cross the custodial threshold and you are at risk of receiving a custodial sentence.

‘Given you are young man of no previous convictions, I am going to order a sentencing report. I am going to grant you conditional bail.’

He ordered a pre-sentence report and added: ‘I am going to grant conditional bail until the hearing of your case which is on 11 June. The fact I am granting bail affords no indication of what the sentence will be. You are at risk of a custodial sentence.’

Dani, who is the daughter of EastEnders star Danny Dyer, shot to fame on Love Island in 2018. She had previously been in a relationship with Kimmence but struck up a new partnership with Jack Fincham in the villa before going on to win the show.

But the 24-year-old rekindled her romance with Kimmence shortly afterwards and there have been rumours that the pair may be getting married in the near future. 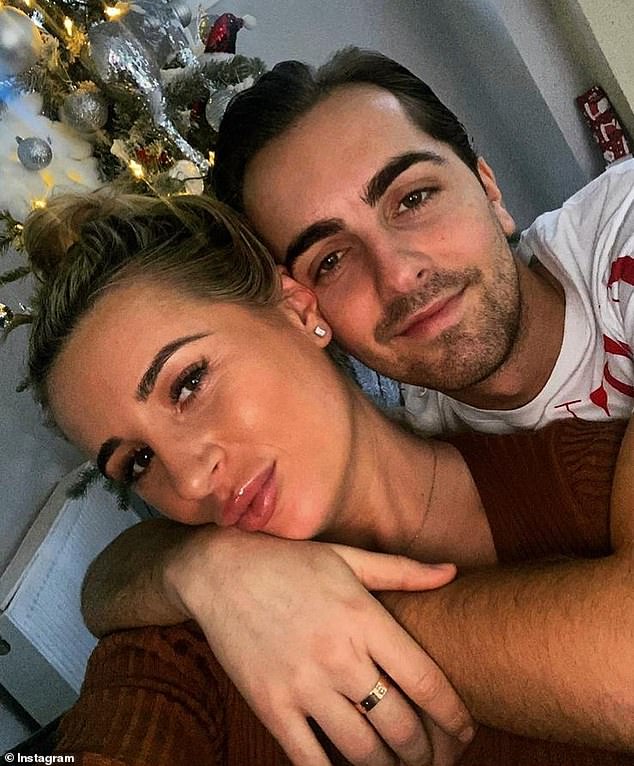 Woes: At his last court appearance, Kimmence was granted conditional bail until the hearing of his case on June 11 where he was at ‘risk of a custodial sentence’ (pictured with Dani)