Daniel Ricciardo has defended the decision made by six Formula One drivers who refused to take a knee during a Black Lives Matter anti-racism demonstration.

Ferrari’s Monegasque driver Charles LeClerc, Red Bull’s Max Verstappen from the Netherlands and 2007 world champion Kimi Raikkonen of Finland, were among those who refused to kneel, moments before the season opening Austrian Grand Prix.

All 20 drivers did line up on the grid at the Red Bull Ring to take a stance against discrimination. Lewis Hamilton was the only one to line up with a Black Lives Matter T-shirt. All other 19 drivers wore a top emblazoned with the message ‘end racism’.

Australian Renault driver Ricciardo, who was one of 14 drivers including Hamilton to take a knee, has said that all of the drivers are supportive of the movement to end racism. 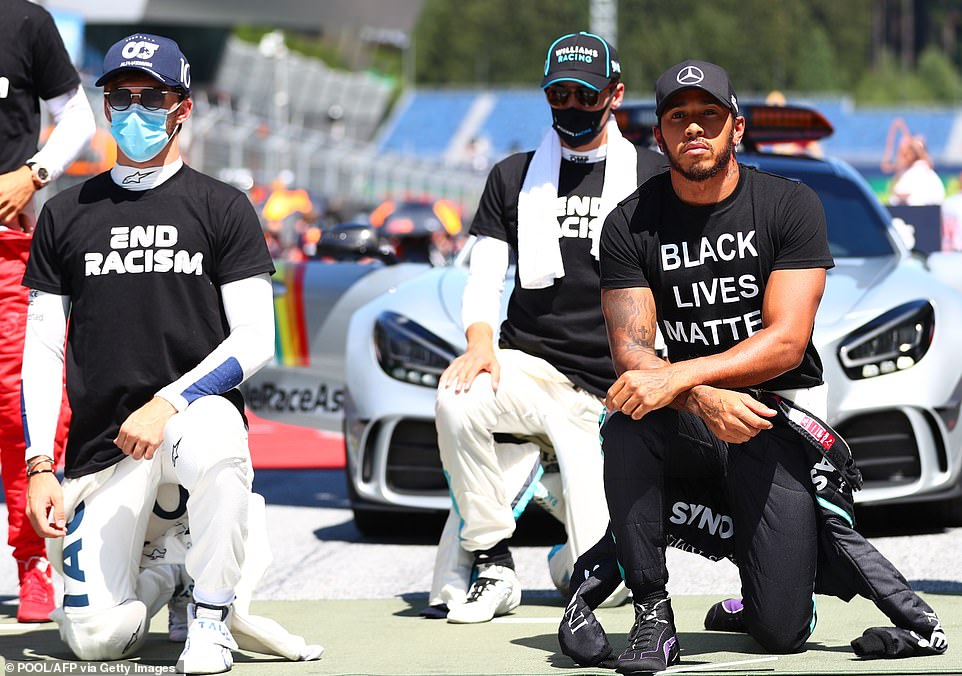 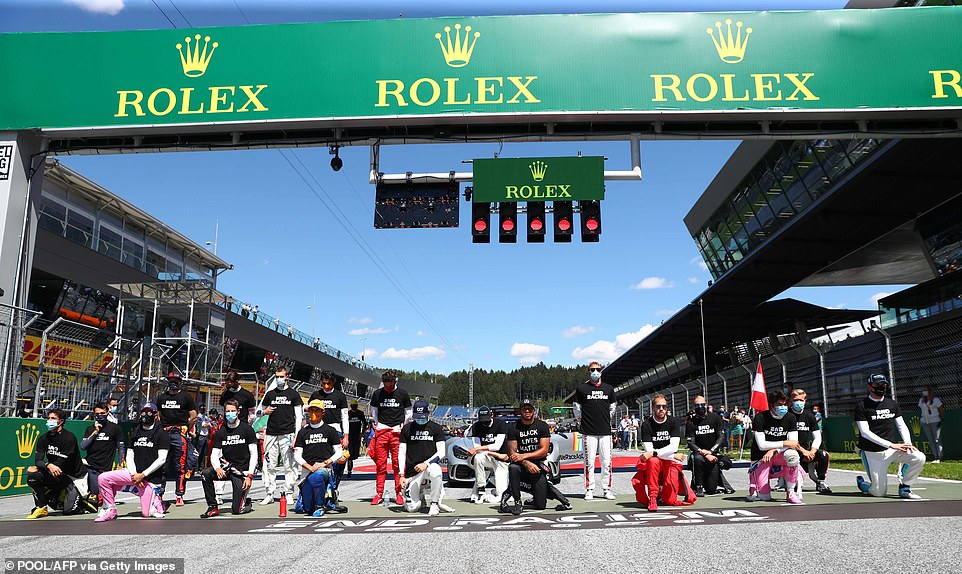 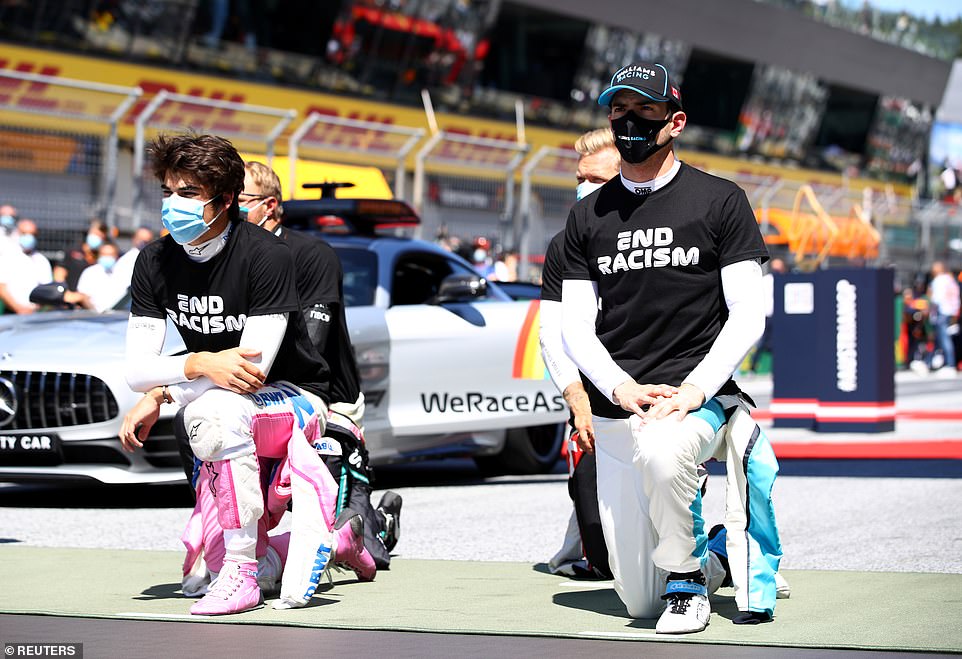 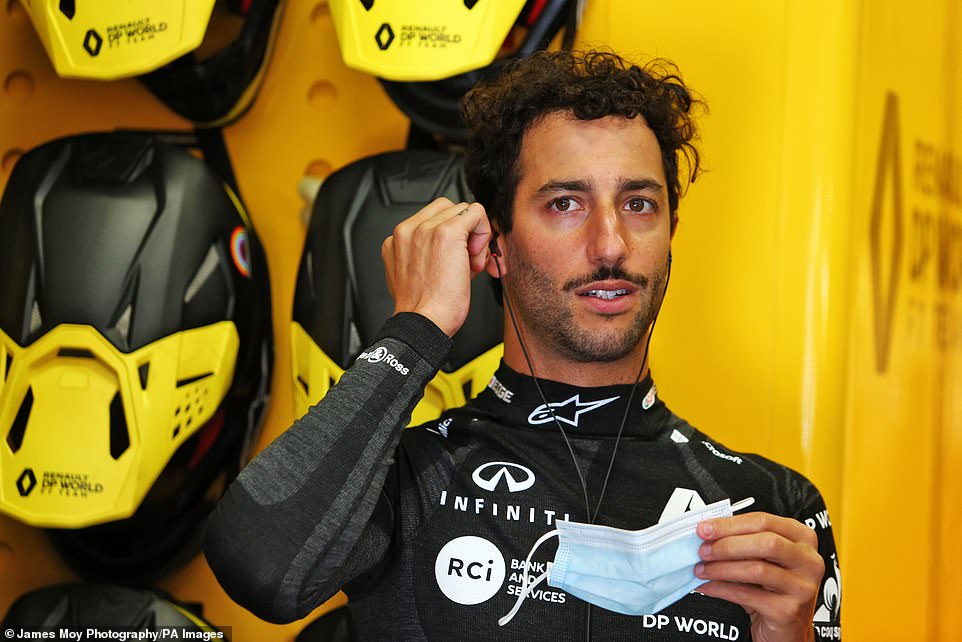 The six who did not kneel

As reported by Yahoo Sport, Ricciardo said: ‘I just think there was a little bit of difficulty with some drivers and their nationality, and what something like taking a knee would represent.

‘Obviously the reasons why we would do it is purely to support Black Lives Matter.

‘It is for nothing political or anything else… We all understood that we will do what we feel comfortable with.

‘But no one is going to be judged or criticised if they don’t stand there in a certain way or take a knee.’

McLaren’s Spaniard Carlos Sainz, Russian AlphaTauri driver Daniil Kvyat and Alfa Romeo’s Antonio Giovinazzi of Italy were the others not to kneel.

Before the incident-packed race which was won by Valterri Bottas, LeClerc announced on Sunday morning that he would not be taking a knee.

‘All 20 drivers stand united with their teams against racism and prejudice, at the same time embracing the principles of diversity, equality and inclusion, supporting Formula 1’s and FIA’s commitment,’ LeClerc said on Twitter.

‘I believe that what matters are facts and behaviours in our daily life rather than formal gestures that could be seen as controversial in some countries. I will not take the knee but this does not mean at all that I am less committed than others in the fight against racism.

Verstappen, who retired from the Grand Prix, also tweeted: ‘I am very committed to equality and the fight against racism. But I believe everyone has the right to express themself at a time and in a way that suits them. I will not take the knee today but respect and support the personal choices every driver makes #WeRaceAsOne #EndRacism

LeClerc finished second behind Bottas in the season opener, with British McLaren driver Lando Norris taking his first ever podium in third, ahead of Hamilton who took a penalty following a collision with Red Bull’s Alex Albon.

After the race, LeClerc held a t-shirt with the slogan ‘End Racism’ with Norris and Bottas following the podium ceremony. 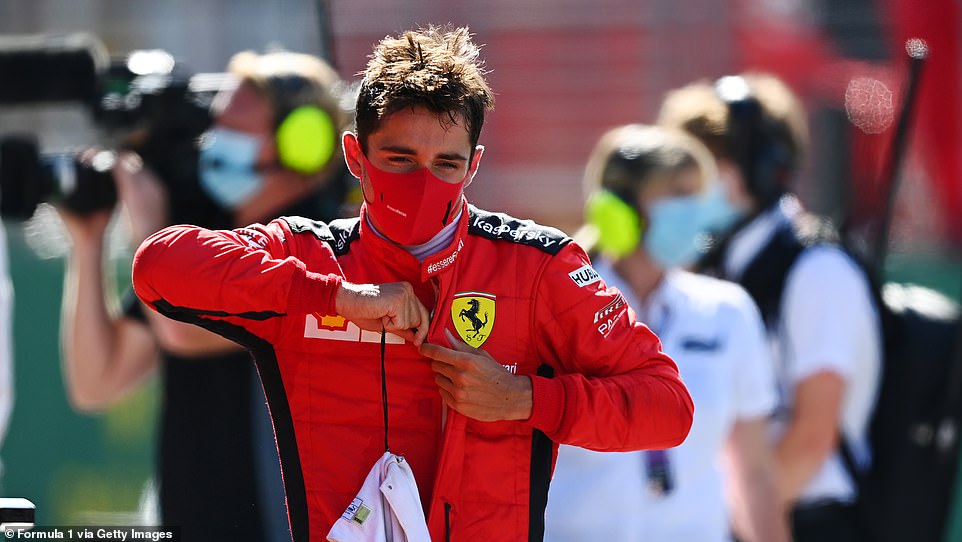 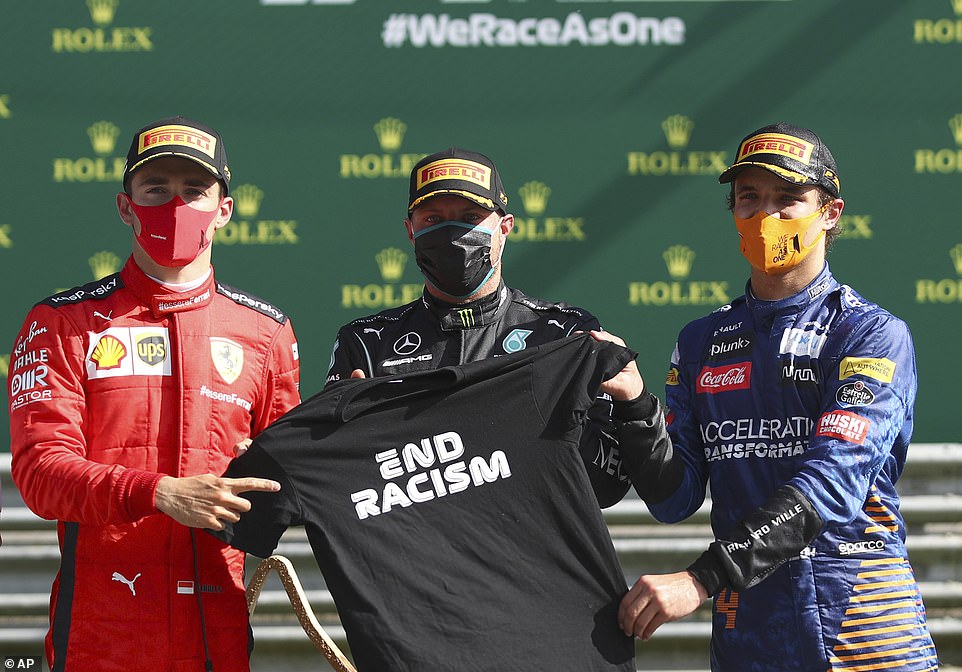 It has been reported that some drivers felt Hamilton was applying undue pressure on them to prove their anti-racism credentials. The six-time world champion has previously claimed that ‘silence is complicity’.

Hamilton who is the grid’s only black driver, has been one of loudest voices on the issue of institutionalised racism and inequality of opportunity in the sport.

The defending world champion has been backed up by his team, who have promised to launch a new programme to increase diversity within their own workforce and will also run a new all-black livery on the car for the 2020 season as a statement of their commitment. 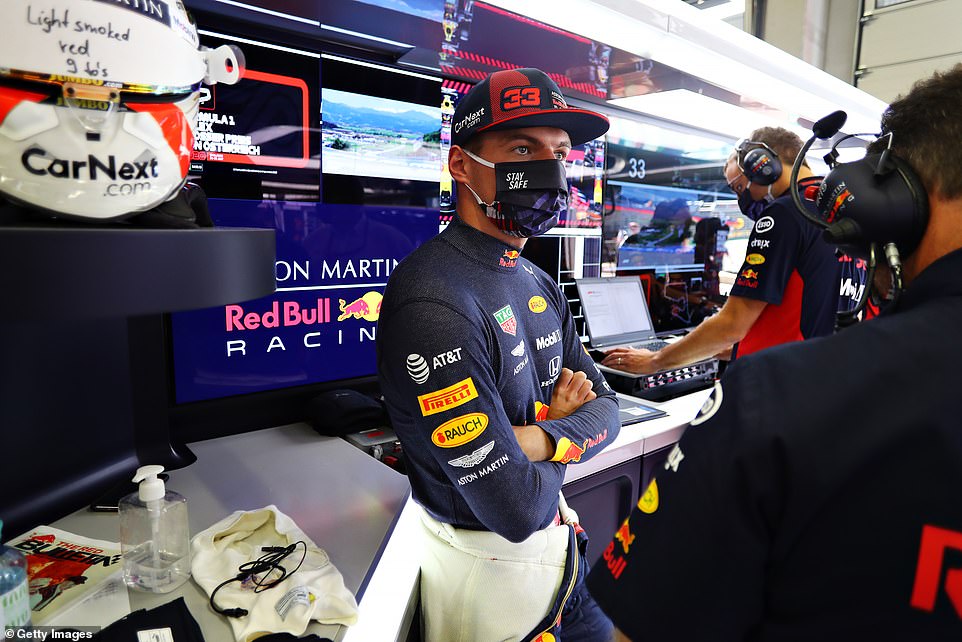 After the race, Hamilton said: ‘Awareness has been raised over the last few weeks. We don’t need it to die a silent death with no change.

‘I can be the guinea pig and keep speaking out. But nobody should be forced into a scenario where they have to kneel.

‘I am really grateful to those who did it along with me. It is a powerful message, but whether you kneel or do not kneel, it is not going to change the world. It is a bigger issue than that.

‘Everyone had a right to that choice and for me kneeling was the right thing.’

All the drivers wore ‘End Racism’ T-shirts on the grid prior to the national anthem, while the FIA, the sport’s governing body, on Sunday pledged nearly a million pounds to fight racism. 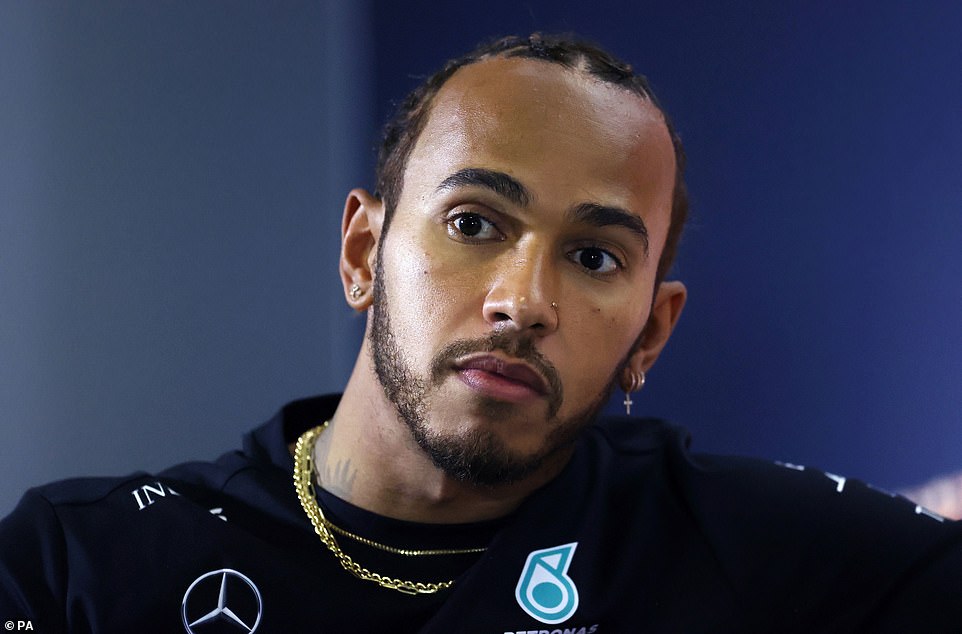 Hamilton said last month that he had been frustrated by ‘those of you who are staying silent’ within the sport, something he expanded on ahead of this weekend’s race.

‘I described the scenario that silence is really generally complicit. There is some silence in some cases,’ Hamilton said.

‘But I think it is part of a dialogue of people trying to understand, because there are still some people who don’t fully understand what is happening and what is the reason for these protests and I continue to try to be that guide and try to influence as many people as I can with it.’

Hamilton tweeted after the race: ‘Today was an important moment for me and all the people out there who are working for and hoping for change. For a more equal and just society. 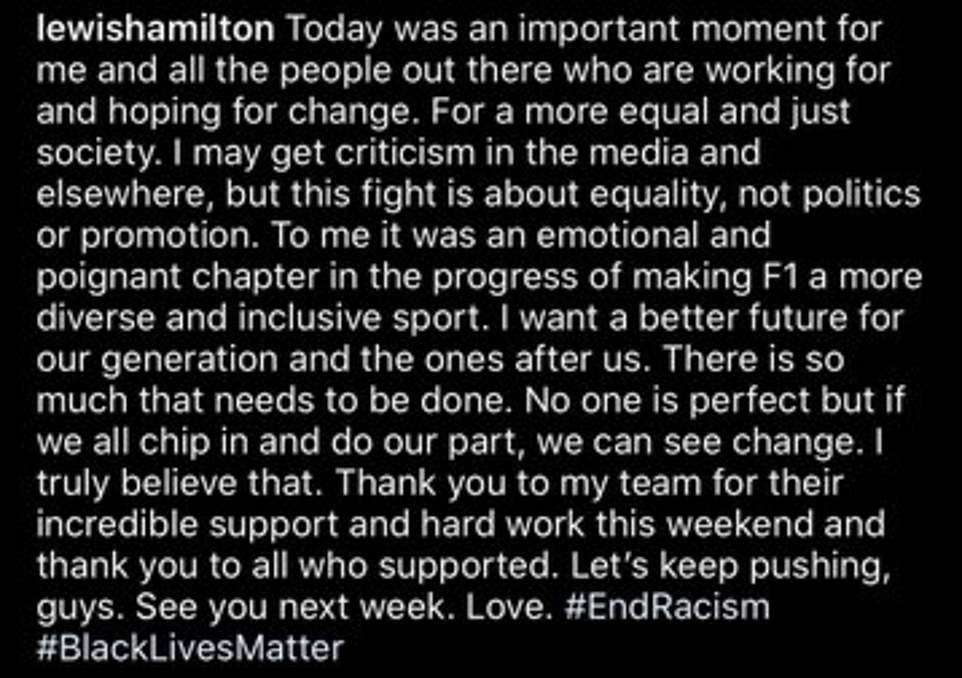 Hamilton tweeted after the race in which he finished fourth  that ‘this fight is about equality, not politics or promotion’

‘I may get criticism in the media and elsewhere, but this fight is about equality, not politics or promotion. To me it was an emotional and poignant chapter in the progress of making F1 a more diverse and inclusive sport.

‘I want a better future for our generation and the ones after us. There is so much that needs to be done.

‘No one is perfect but if we all chip in and do our part, we can see change. I truly believe that.

‘Thank you to my team for their incredible support and hard work this weekend and thank you to all who supported. Let’s keep pushing, guys. See you next week. Love. #EndRacism #BlackLivesMatter’