Daniel Ricciardo raised the alarm from his cockpit with 50 laps of the Monaco Grand Prix remaining, but nursed his car home expertly to win the race that got away from him two years ago.

In command during the 2016 edition only to be denied by a botched pit stop, the Australian seemed to be cursed again on Sunday when he came on to say: ‘I’m losing power.’

But Ricciardo kept going despite having to live with the power problem, bravely and brilliantly holding off the challenge of Ferrari’s Sebastian Vettel, who finished second, 7.3sec back, and Mercedes’ Lewis Hamilton, third, a further 9.6sec adrift. 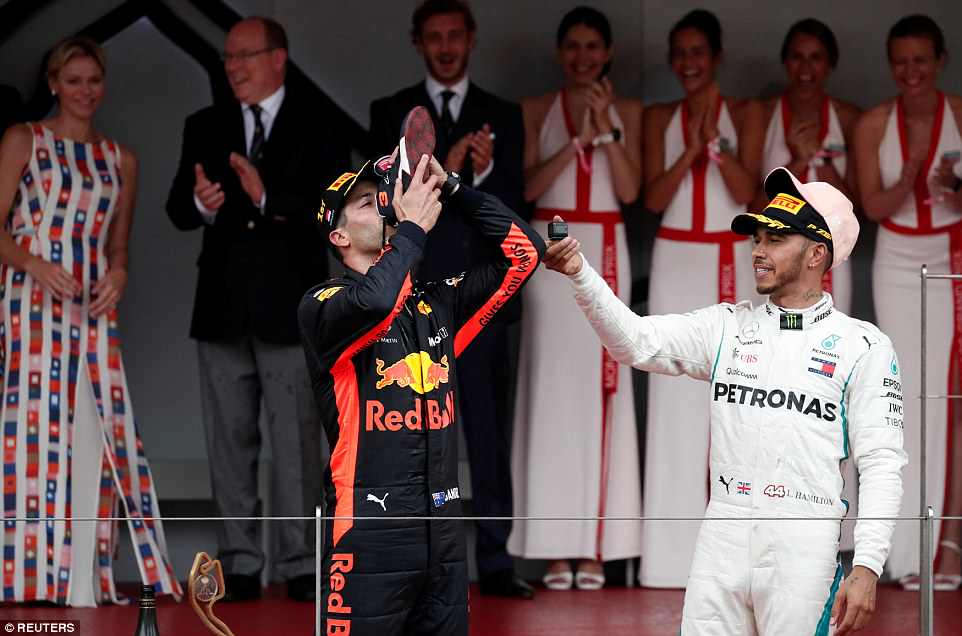 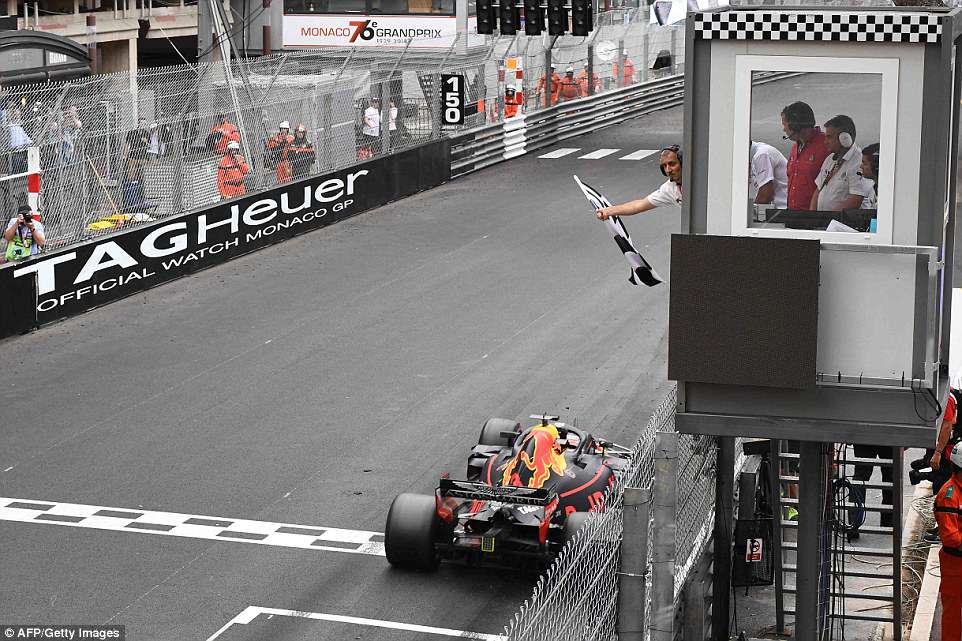 Despite losing 25 per cent of his engine power, Ricciardo led every lap before taking the chequered flag at Monte Carlo 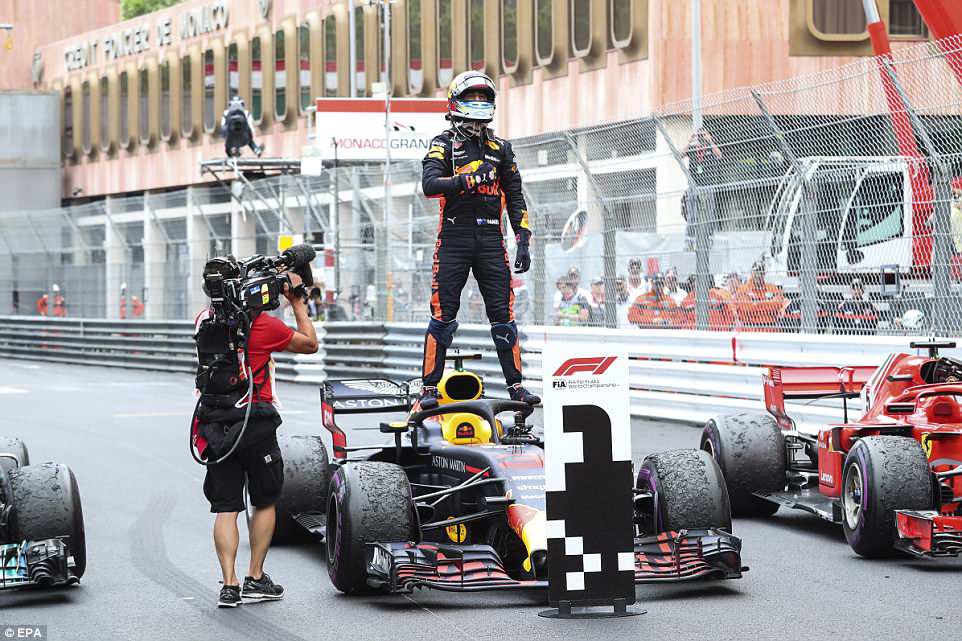 After his stunning triumph, the Australian stands on top of his Red Bull following his second win of the season 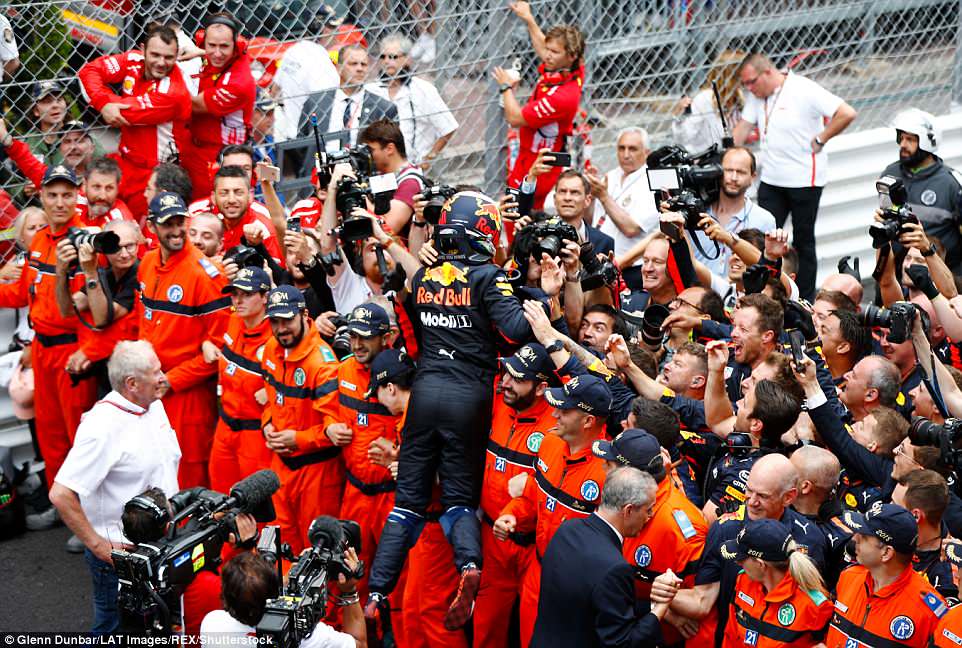 Despite the wall of stewards acting as a barrier, Ricciardo leaps into his team of mechanics after the race 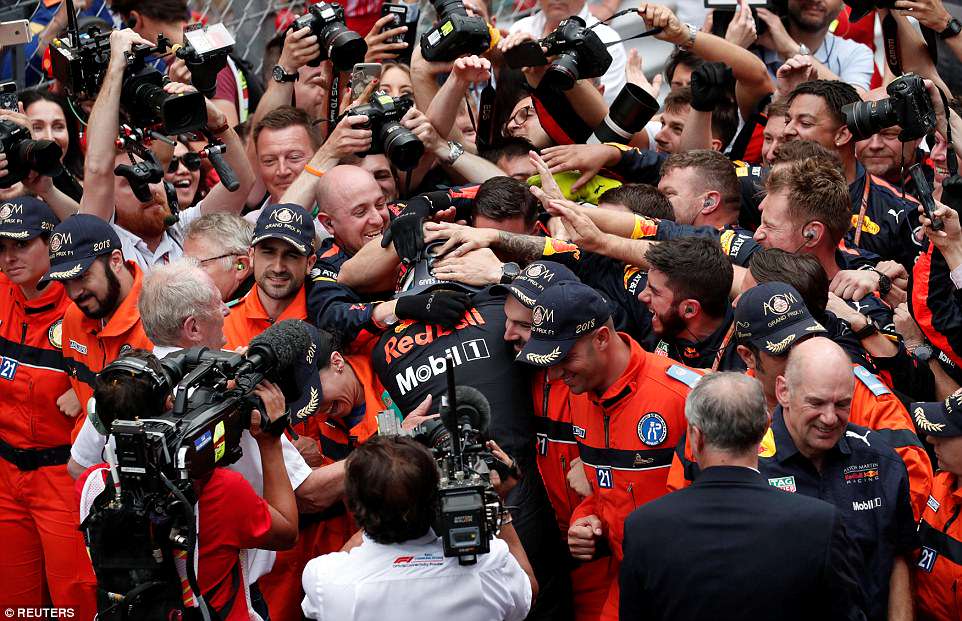 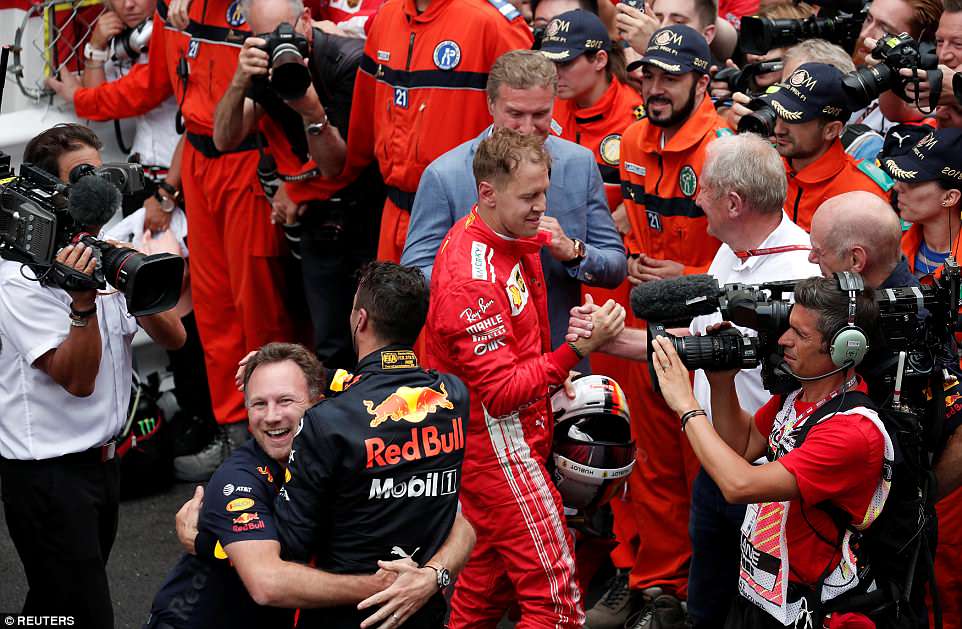 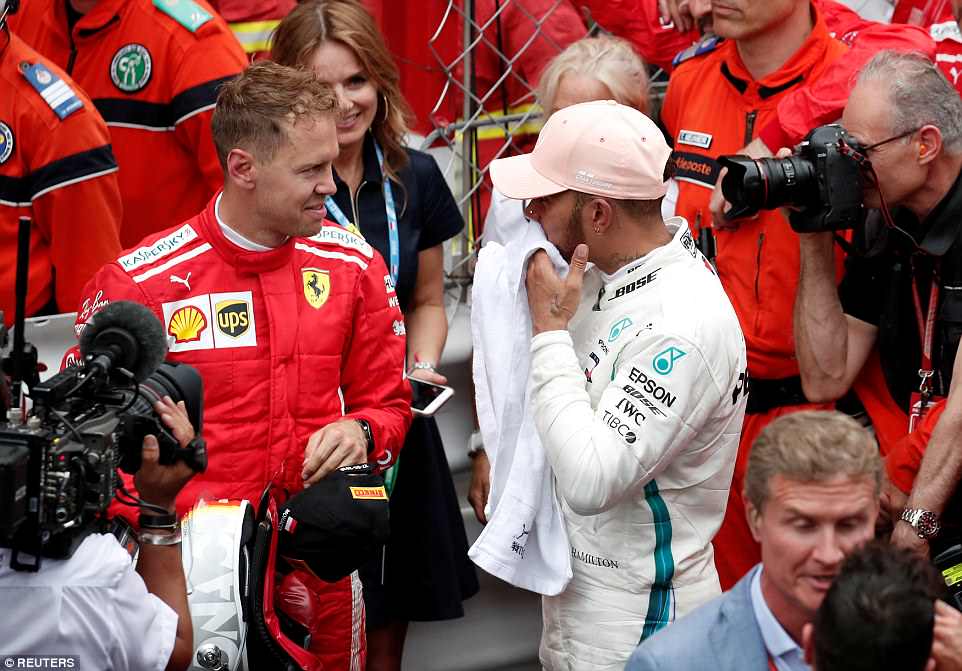 It was a race that threatened more drama than it produced. There were times when the tyres were going off – with Hamilton making plenty of noise over the radio about his graining rubber – and Ricciardo’s lead being diminished.

But Monaco being Monaco, its streets being cramped, none of the top three held enough of a speed advantage to overtake.

So the podium people finished where they had started. Indeed, that was the case with the top five, with Ferrari’s Kimi Raikkonen fourth and Mercedes’ Valtteri Bottas fifth. 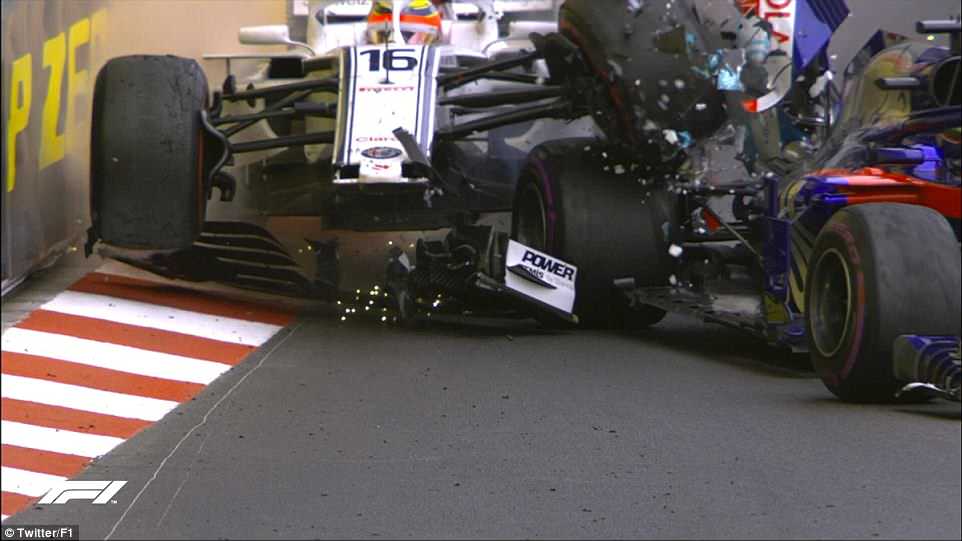 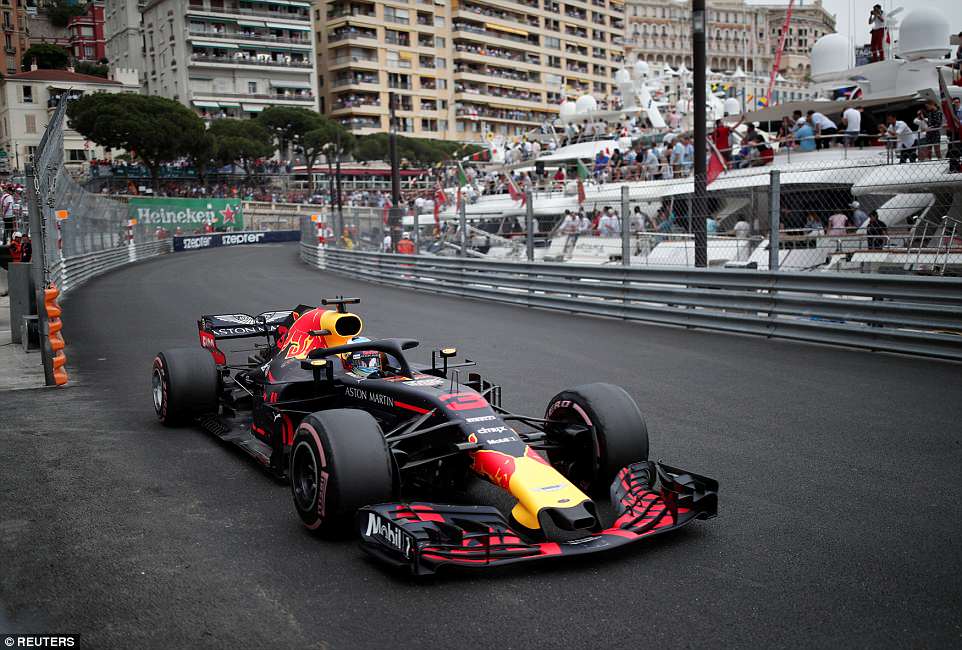 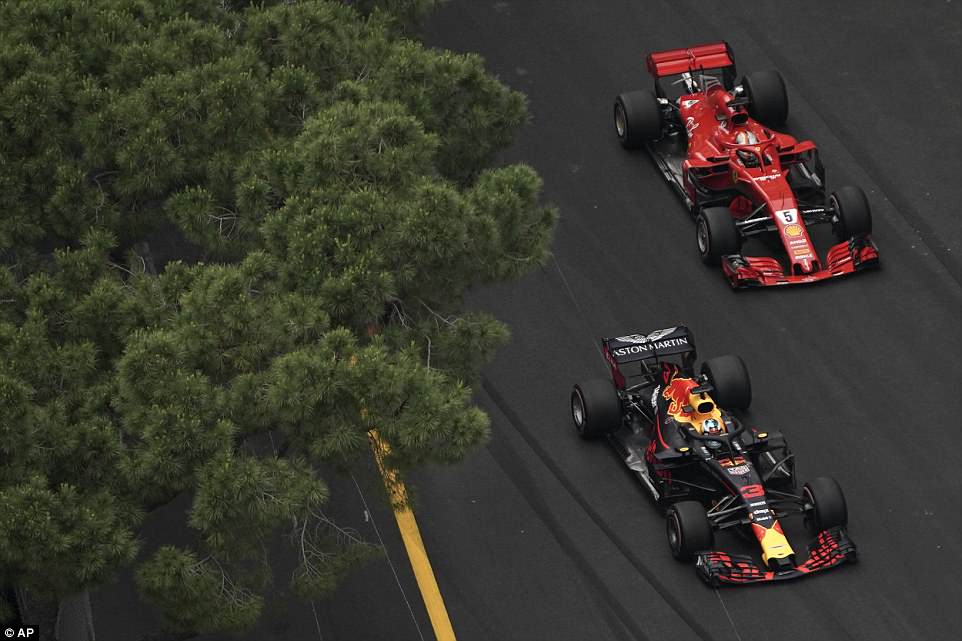 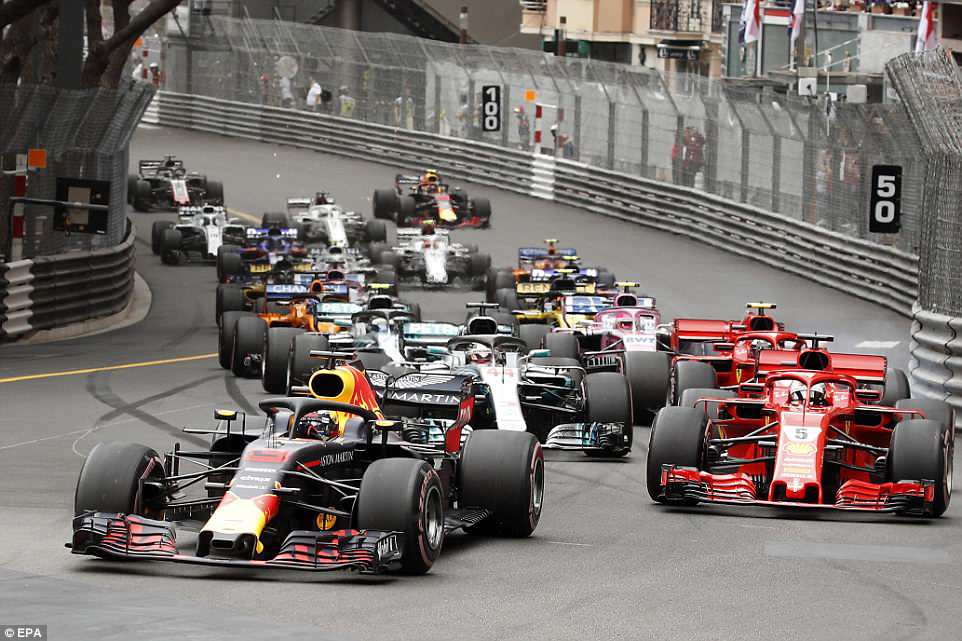 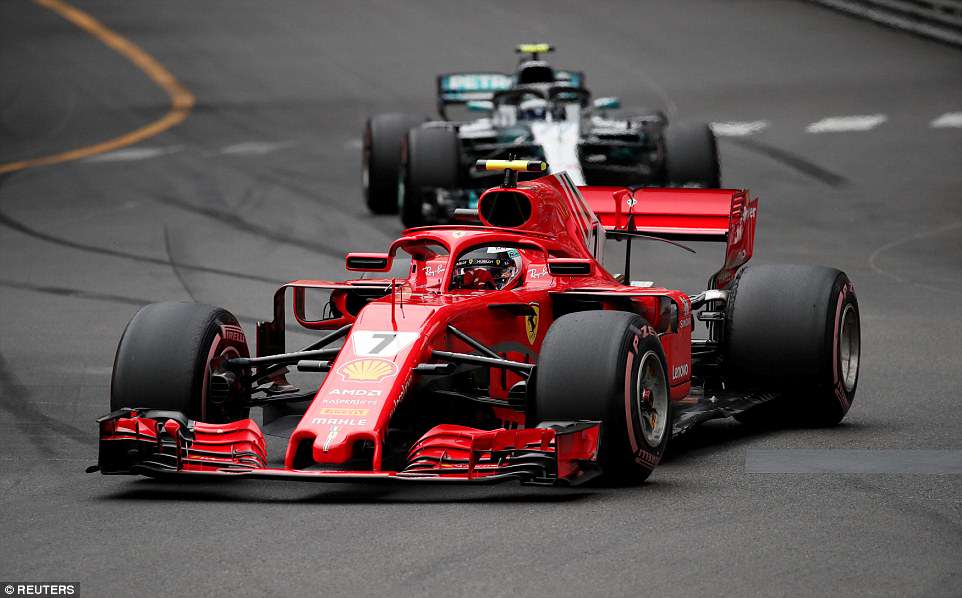 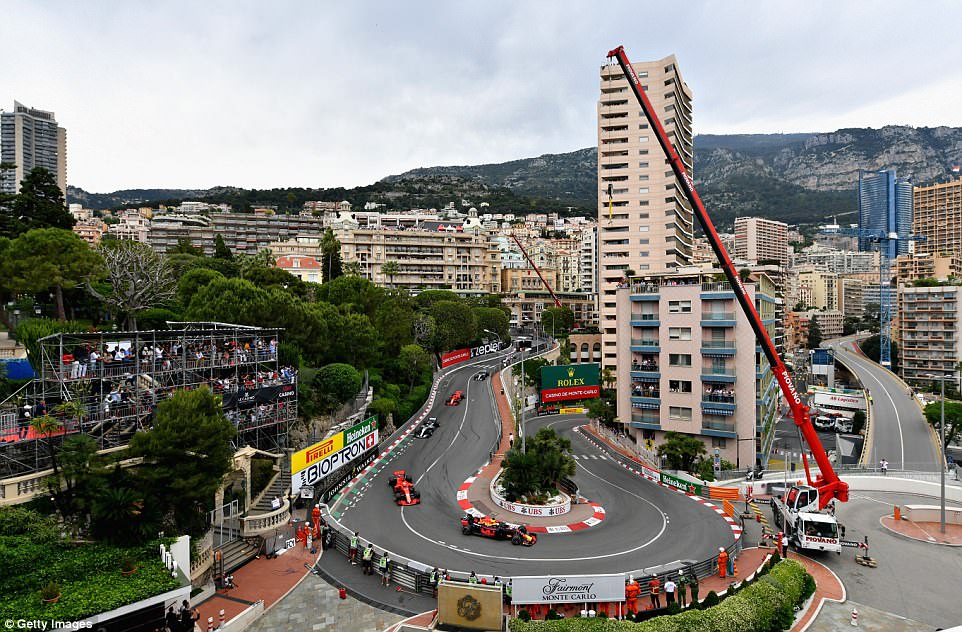 Ricciardo was pushed all the way, not least on the hairpin, as his power struggles saw Ferrari sense an unlikely race victory 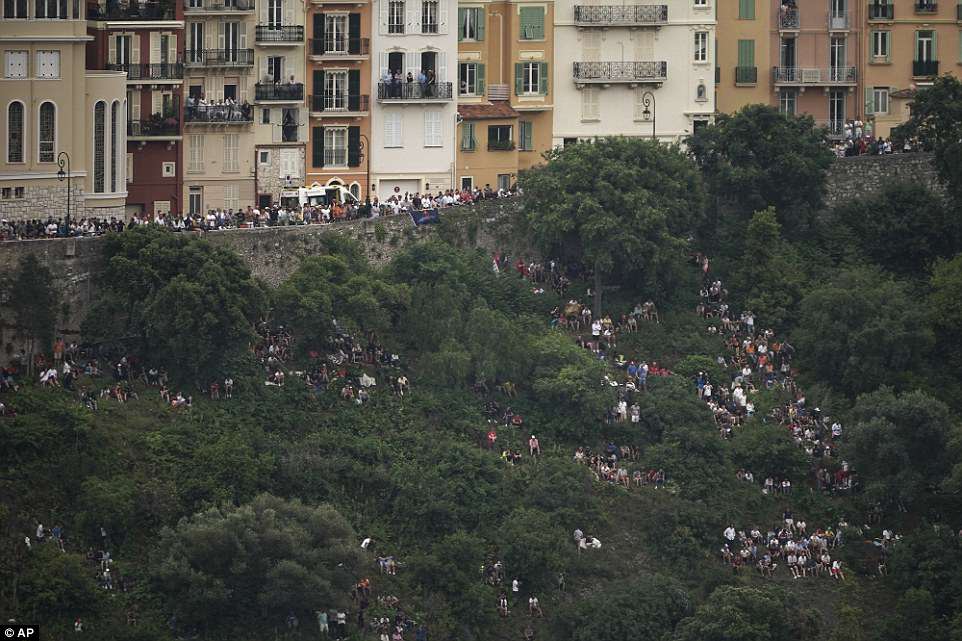 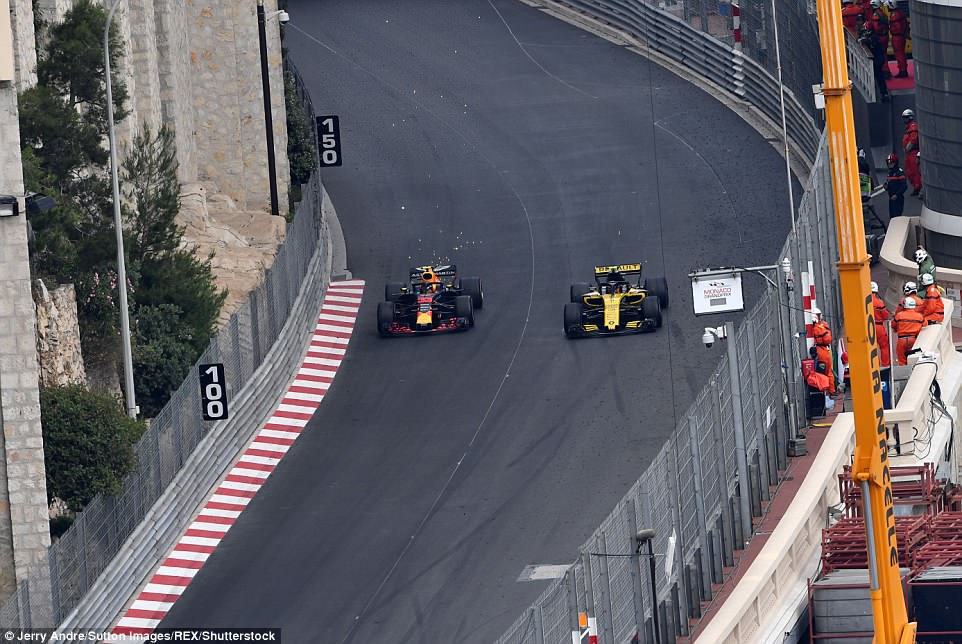 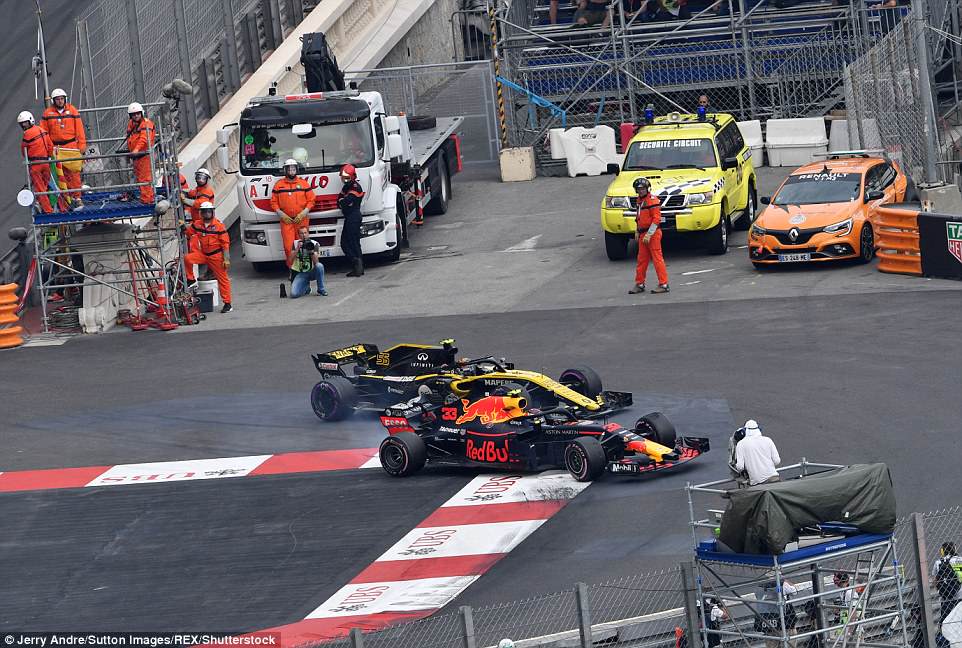 It was Ricciardo’s second win of the season, and a richly deserved one. He was the man of the weekend, being quickest in every session from first practice to the final corner.

The result meant Vettel cut his deficit to Hamilton at the top of the drivers’ standings to 14 points, down three, ahead of the next race in Montreal a fortnight hence.

That track in Canada is a Hamilton favourite, so minimising the losses here on a circuit at which Mercedes and he have struggled in recent years, was a good piece of damage limitation in the wider championship picture.

17 Lance Stroll (Can) Williams at 2 Laps 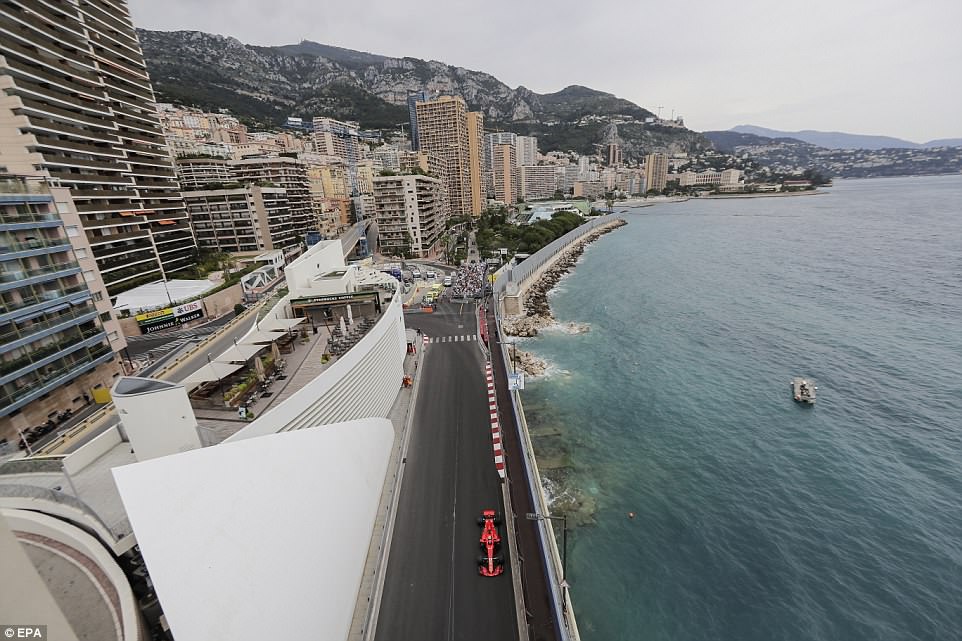 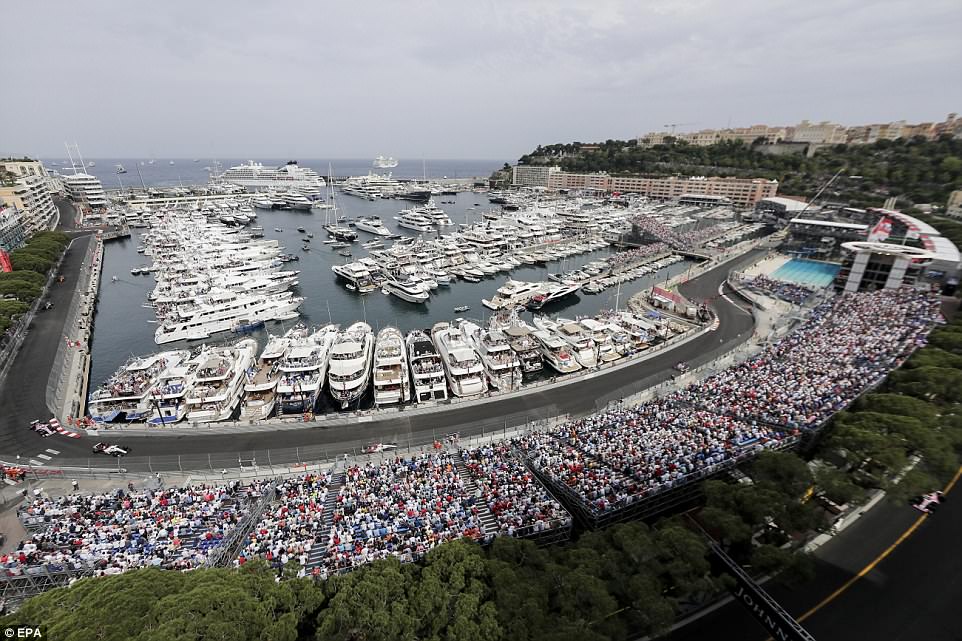 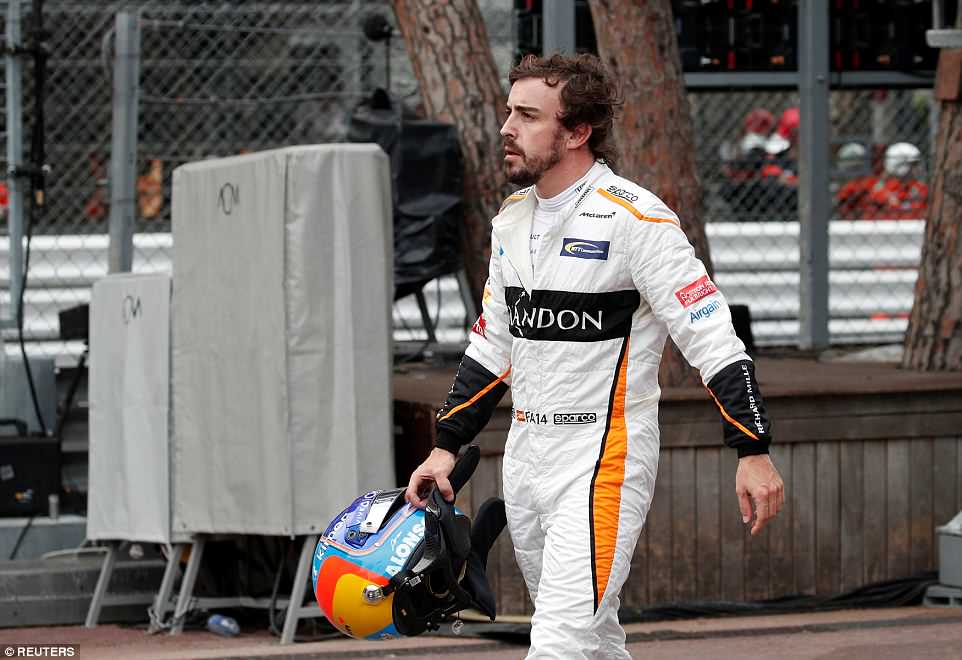 Hamilton struggled to see it that way for a large chunk of the race. ‘I told you about this tyre,’ he complained over the radio. And then said: ‘I can’t believe these tyres are going to last 40 more laps.’ They did.

It was an afternoon of partial redemption for Max Verstappen. He started at the back of the grid after a needless crash in the third practice session that forced him to miss qualifying. He raced better than he practised pushing up to finish ninth.

McLaren’s Fernando Alonso retired at Sainte Devote, with a reliability problem – gearbox or engine. Oh, for Honda’s indestructible power unit! He was running seventh and being pursued by Toro Rosso’s Pierre Gasly.

Monaco’s race hinges on a safety car to enliven it. We did not get one. The action suffered for it, even though local boy Charles Leclerc drove his Sauber into the back of Brendon Hartey’s Toro Rosso on the exit of the tunnel, briefly causing a Virtual Safety Car to be introduced.

But the paucity of drama at the front did not matter to Ricciardo, who had dominated slowly from first place, as he drank the victor’s sweaty champagne from the inside of his racing boot. 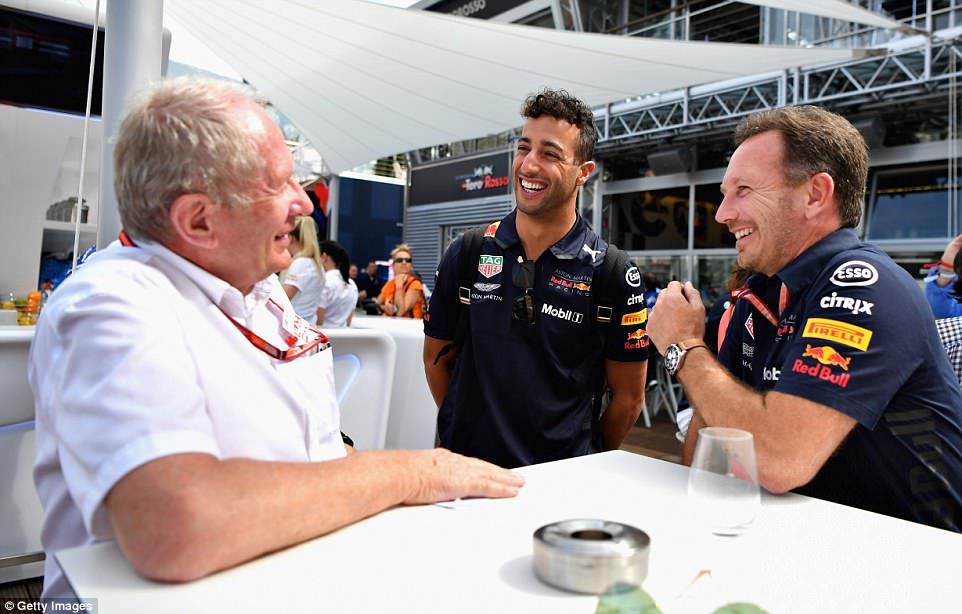 Having been quickest in every session in the weekend, spirit was unsurprisingly high with Ricciardo and the Red Bull camp 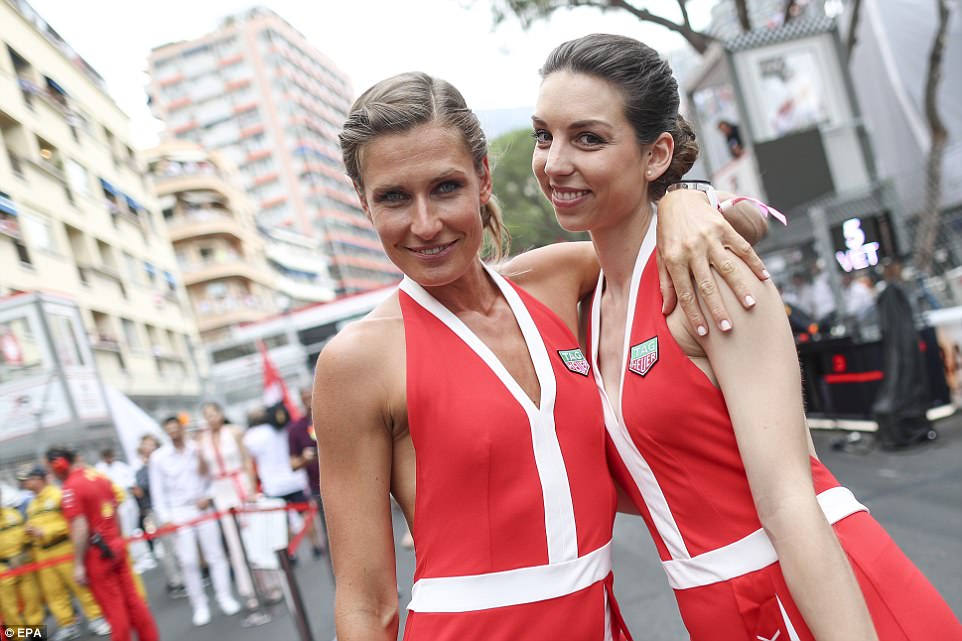 Away from divers and engineers, there were lots of smiles as Monaco saw a return of grid girls after other circuits cut them 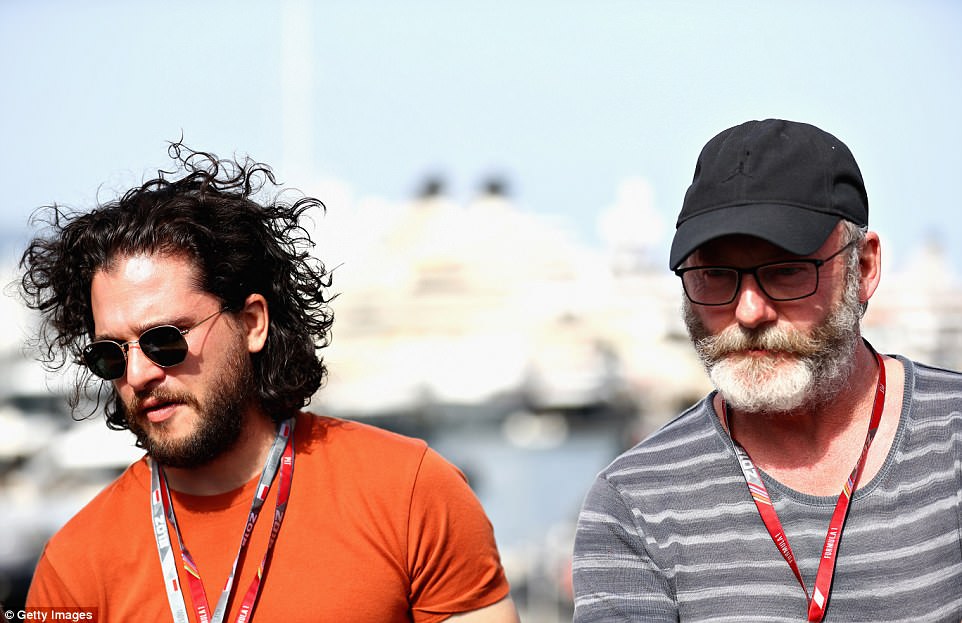 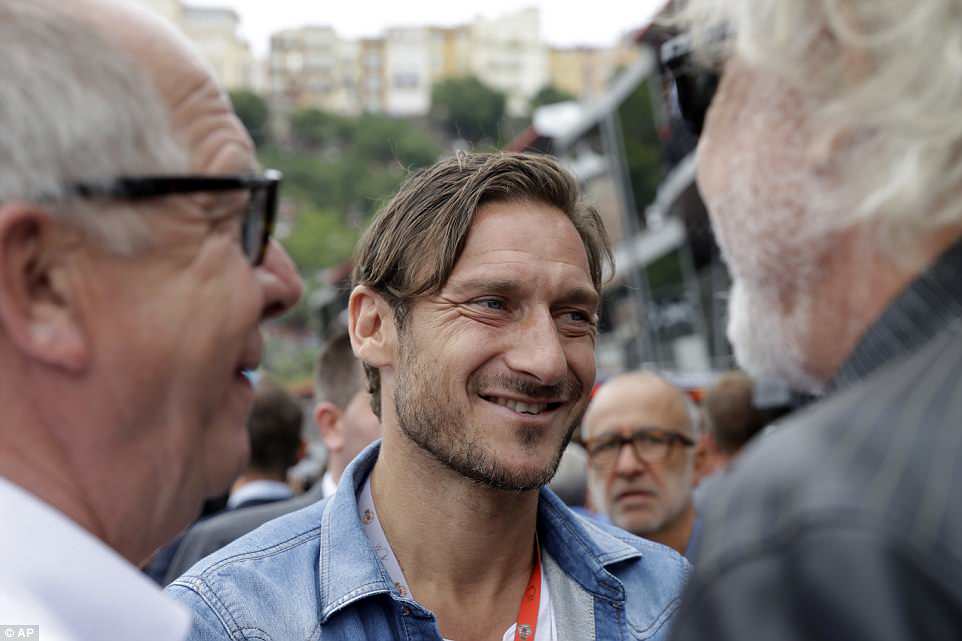 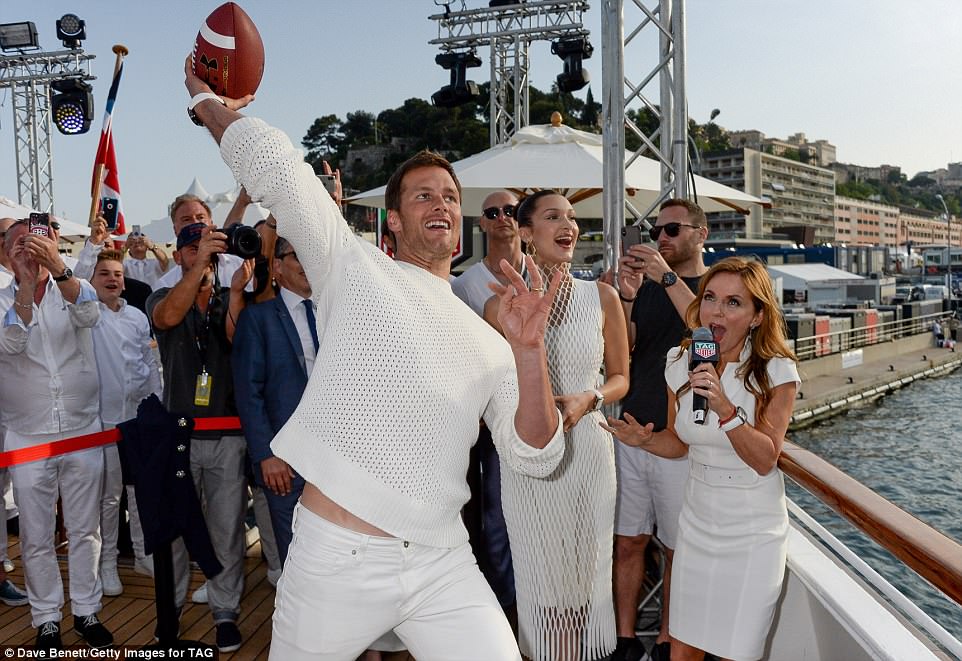