She has been lapping up the sunshine on a Spanish break with pal Ferne McCann.

And Danielle Armstrong was once again flaunting her incredible physique on Saturday as she took to Instagram to share a slew of snaps from their sizzling getaway.

The 29-year-old reality TV star updated fans with her latest holiday exploits as she saw some of the sights with Ferne, 27, who sported the perfect holiday glow on the break with her five-month-old daughter Sunday.

Bikini babes: Danielle Armstrong, 29, showed off her incredible figure on Friday as she took to Instagram share a slew of snaps from her Spanish break with pal Ferne McCann

Danielle’s washboard abs were on full display in a video posted to her Instagram stories, sporting a white and red-striped bikini and denim cut-off shorts.

The selfie-style video saw the Essex beauty and Ferne dancing as they strolled along the pavement with baby Sunday cosied up in her pram, feigning an American accent as they soaked up the blazing sunshine.

Another saw Danielle strike a pose in front of a tree which sported paper leaves covered in an array of messages, with the blonde beauty hanging up her own leaf emblazoned with the words: ‘We are more than just friends, we are sisters!’ 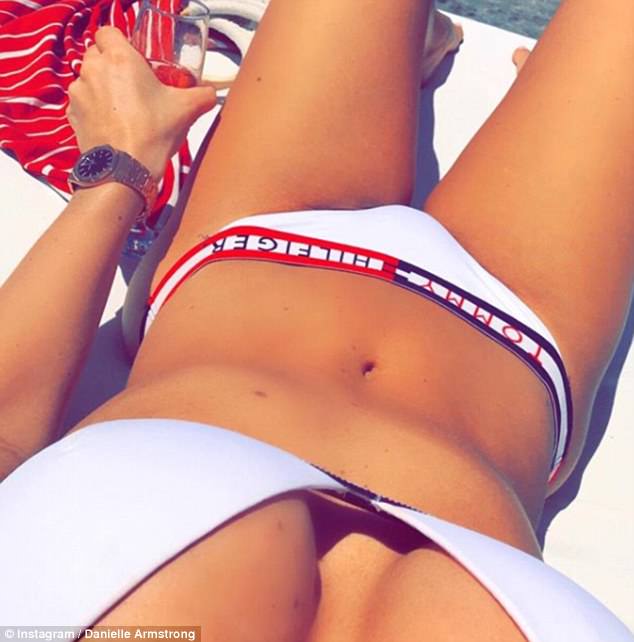 Amazing: After her morning outing with Ferne, Danielle also took to social media to share a snap of her incredible flat tanned stomach as she soaked up some sun

After her morning outing with Ferne, Danielle also took to social media to share a snap of her incredible flat tanned stomach as she soaked up some sun, writing the caption: ‘Getting my tan on.’

The pair have maintained a close friendship since appearing on TOWIE together, with Danielle recently praising Ferne’s weight loss, sharing a before and after snap of the television personality on Instagram.

Ferne proved to be the best advertisement for Danielle’s 30 day health and fitness plan as it showed the beauty sporting a honed figure. 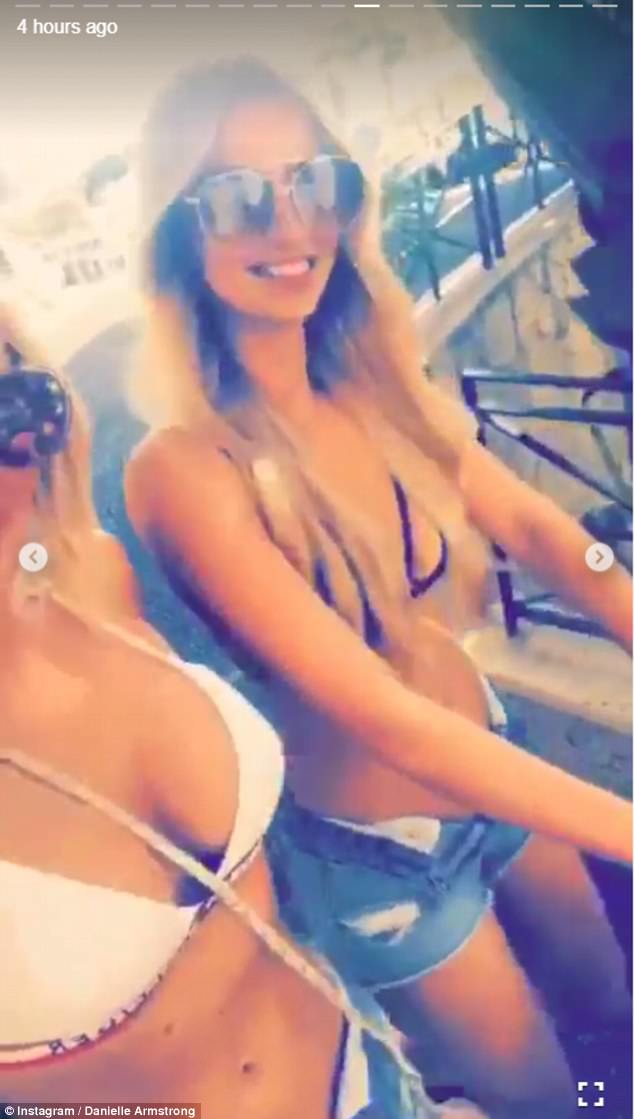 Out and about: The Essex beauty shared a video as she strolled along in the early morning sunshine with Ferne, 29, who attempted her version of an American accent 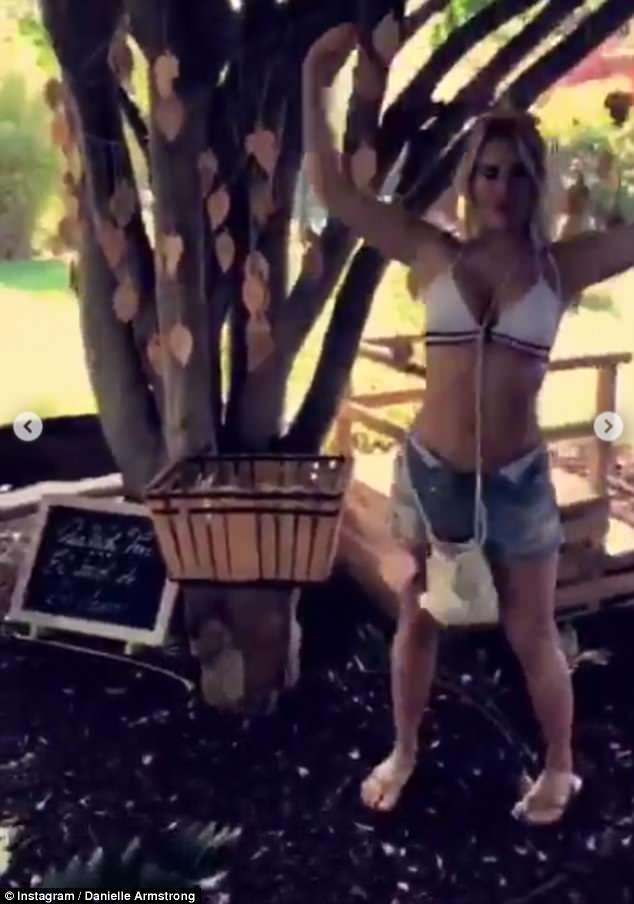 Nice: Danielle wrote an endearing message to hand on a special tree covered in wooden leaves

Danielle wrote: ‘Some Monday Motivation For You Ladies. Both myself and Ferne have completely transformed our bodies and with the summer approaching we want to help you girls to. ‘

Danielle has been lapping up the sunshine on her Spanish break with Ferne, who recently gushed on social media that she was ‘so happy to be away.’

It has been a tough time for the reality TV star in recent months, after her ex boyfriend, and Sunday’s father, Arthur Collins was jailed for his part in an acid attack last April. 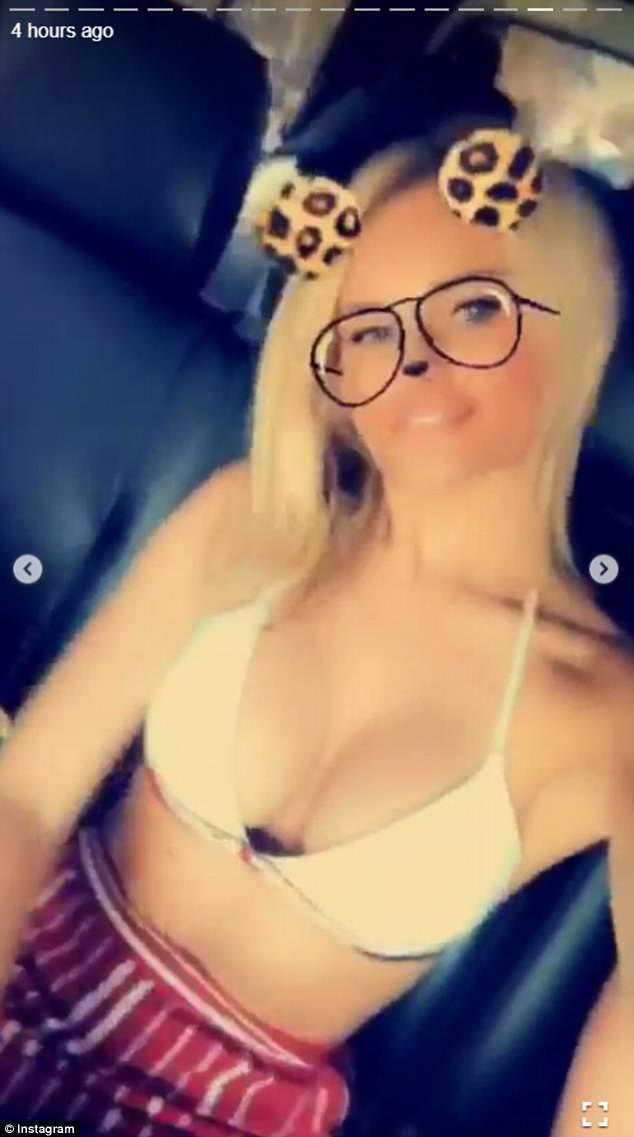 Amazing: The ex-TOWIE star also sported a funny Instagram filter for a video from inside the car before heading back to the villa