Denmark’s immigration minister has posted a drawing of the Prophet Muhammad on Facebook, one of the satirical cartoons that caused outrage among Muslims around the world a decade ago.

Inger Støjberg, 44, posted a screenshot of her iPad to reveal that she uses one of the satirical cartoons, showing the Prophet Muhammad with a bomb in his turban, as the background on her handheld device.

Støjberg wrote that having the cartoon on her iPad reminds her that Denmark is a country with freedom of speech, which includes the right to criticise religions.

Controversial: Inger Støjberg, Danish Minister for Immigration, posted a screenshot of her iPad to reveal that she uses one of the Prophet Muhammad cartoons as the background on it

She made the statement in response to a decision by a Danish museum not to include the drawing in a new exhibition about blasphemy since the Reformation.

‘It is the museum’s own choice and they have their full right to do it, but I think it’s a shame,’ Støjberg, minister for immigration and integration, wrote in her Facebook post. 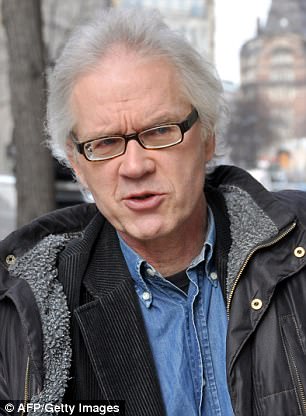 ‘Honestly, I think we should be proud of the Mohammad cartoons,’ Støjberg said.

Støjberg is not adverse to controversy, and last year introduced the so called ‘jewellery law’ which outlined that refugees and migrants would have to hand over cash and jewellery in order to pay for acommodation in Denmark.

The drawings of the Prophet Muhammad by Swedish artist Lars Vilks were published Danish and Swedish newspapers in 2006.

Several months later, the cartoons caused global outrage, as Islam does not allow any depictions of the Prophet.

Three Danish embassies were attacked and at least 50 people were killed in rioting in 2007 in the Middle East, Africa and Asia.