Danny Dyer has opened up on leaving EastEnders ahead of his final scenes on the popular soap, crediting it with saving his career.

The actor, 45, will be leaving his role as Mick Carter in an explosive Christmas Day special after nine years on the show.

Speaking about his decision to quit, Danny said it wasn’t easy for him as he was ‘very attached’ to the show.

‘Attached’: Danny Dyer has opened up on leaving EastEnders ahead of his final scenes on the popular soap, crediting it with saving his career

He told The Sun: ‘I was questioning if I had made the right decision. It is very emotional for me. I am very attached to this show. So to make the decision I made, I did not make it lightly because it is a huge job to walk away from.’

Danny has been open about his struggles with drink and drugs and credits EastEnders with turning his life around when he was cast in 2013.

He said: ‘When I came into this show I was a f***ing car crash. I can’t believe I got given a shot. My career was on its f***ing arse. I had made a lot of bad decisions and I was in a bad place – and Dominic Treadwell Collins took a risk on me.’

Opening up about shooting his final scenes, he said that it was very emotional with ‘lots of tears’ being shed. 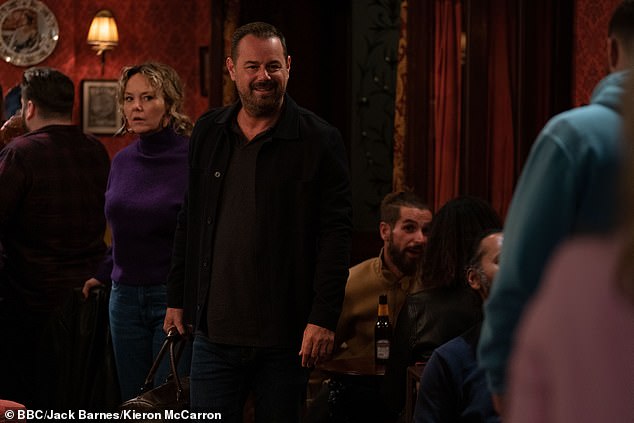 Exit: The actor, 45, will be leaving his role as Mick Carter in an explosive Christmas Day special after nine years on the show

He also confessed to stealing a stool out of the Old Vic as a memento of his time on Albert Square.

Speaking on his explosive exit, Danny teased: ‘I wanted it to be a fitting end and hopefully it is. It is the end of an era.’

It comes after Danny said in June that his exit would be hugely dramatic, and hinted it would end in Mick’s death. 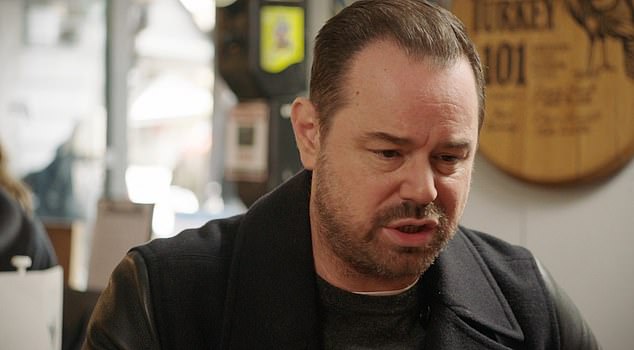 Difficult: Speaking about his decision to quit, Danny said it wasn’t easy for him as he was ‘very attached’ to the show

‘I wish I could tell you more. In the next couple of months you’ll learn a bit about what we’re going to do but I can tell you it’s huge.’

He added: ‘I want to go out in a way that’s going to get people talking. It’s a thing that needs to be discussed more openly and I think it’s going to shock a few people.’

Earlier this year, Danny admitted he wanted to quit EastEnders ‘for a while’ as he spoke out for the first time since he announced his departure from the soap.

Speaking on his Sorted With The Dyers podcast, he said: ‘When you’re in a job like a soap your contract comes up for renewal and every time it has they’ve asked me to stay, and I’m very grateful for that. Because I’ve seen a lot of people come and go. It’s very tough.

‘I always debate whether I want to sign again and I’ve been contemplating a while now about whether it’s time to roll the dice, take the leap.

‘The big news is I’ve decided not to renew my contract. That’s all. That’s not because I’ve fallen out with anybody, I love everybody. That job has been amazing for me. It’s an important part of television.’

Speaking at the time soap star insisted there’s no ‘big story’ behind his departure, other than he wants to try other things.

A spokesperson for the BBC show confirmed that Danny would be leaving Walford later this year, but insisted that there will still be more drama in store for Mick ahead of his exit.

The spokesperson said: ‘Danny will be leaving EastEnders when his contract comes to an end later this year.

‘Danny has made Mick Carter an iconic character which we shall always be grateful for, however we won’t be saying goodbye just yet as there’s still quite some time – and plenty of explosive drama for Mick – to come before he departs Walford. ‘ 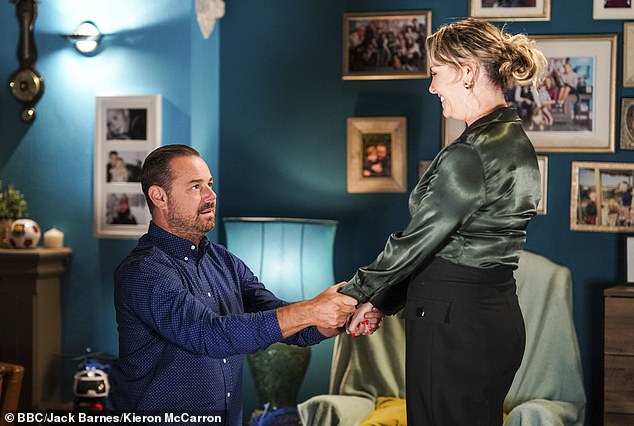 Saying goodbye: Opening up about shooting his final scenes, he said that it was very emotional with ‘lots of tears’ being shed