The first time colourful Sydneysider Danny Lim donned a sandwich board in protest was in 2004 when he set out to peacefully draw attention to a corruption scandal at Strathfield.

That sign read: ‘Strathfield Council, have some morals! Stand down!’

The stunt angered some of Lim’s local government representatives in the inner-west –  one alderman came out of council chambers and ripped the placard off Lim’s shoulders.

Four years later Lim ran for Strathfield Council as an independent, was elected, and served for two controversy-plagued years. Today he is something of a cultural icon.

Lim was back in the spotlight last week when he suffered a head injury while being detained at the Queen Victoria Building in the city’s central business district. 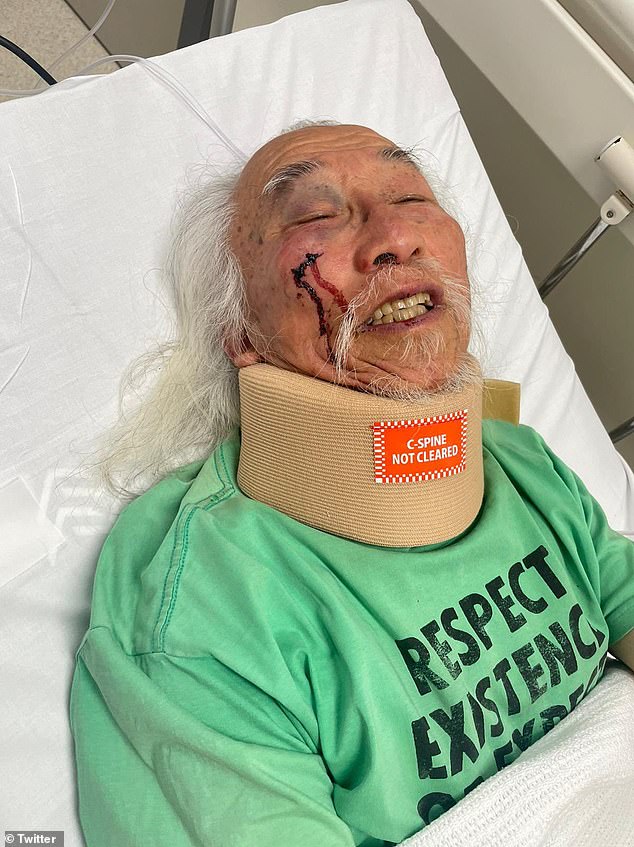 Danny Lim was seriously injured after police attempted to arrest him for allegedly refusing to move on when asked at Sydney’s Queen Victoria Building on Tuesday. Lim had a brief political career in local government and unsuccessful stood for the federal and NSW parliaments

The 78-year-old was taken to St Vincent’s Hospital at Darlinghurst on Tuesday after he was forced to the floor by two policemen and cracked his head on the tiles.

An investigation into Lim’s attempted arrest is underway and he has since been reunited with Chihuahua/Pomeranian-cross Smarty, his constant companion.

Smarty featured prominently in Lim’s campaign to ‘Clean Up Council’ when he promised the people of Strathfield ‘openness, transparency, accountability and morality’.

Lim was raised by his Chinese grandmother in a small village about 90km from Malaysia’s capital Kuala Lumpur after being orphaned as an infant. 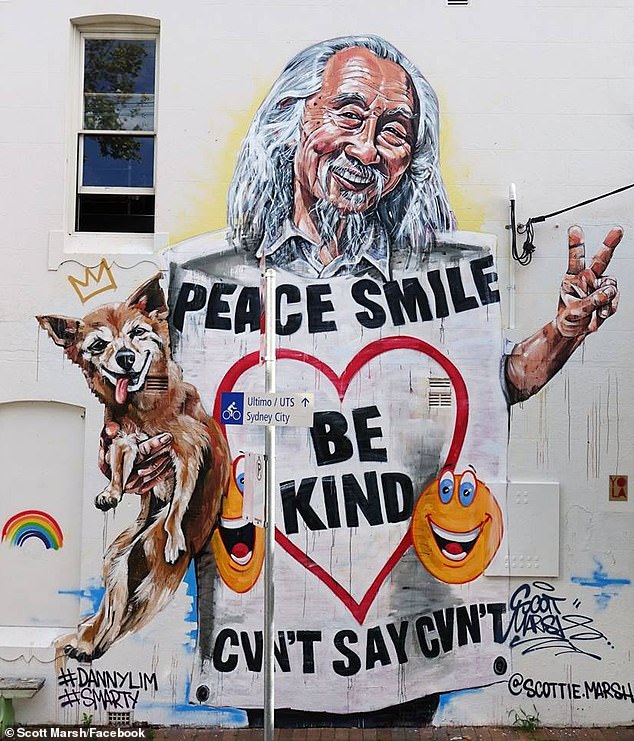 Lim has been a widely known and popular figure on the streets of Sydney for more than a decade, spreading his message of peace, love and happiness. He is the subject of this mural featured outside Cafe Giulia in Chippendale 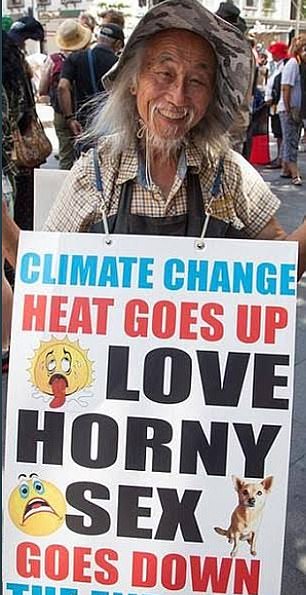 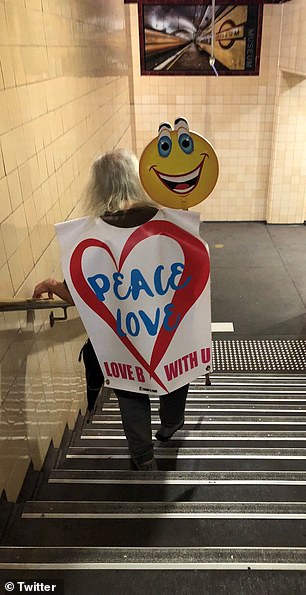 With his sometimes risque messages (left) and zany get-up, Danny Lim has become a familiar figure in Sydney’s CBD wearing his sandwich boards and large smiley faces (right) around town

As part of a Chinese ethnic minority he grew up amid institutionalised racial discrimination and moved to Australia aged 19 in 1963 on a student visa, later working as an electrical technician.

He retired at 59 and asked not to be paid when elected to represent the residents of a suburb he had lived in since the late 1970s.

During Lim’s time in local government he was described as Sydney’s most eccentric councillor and opponents called him ‘barking mad’. 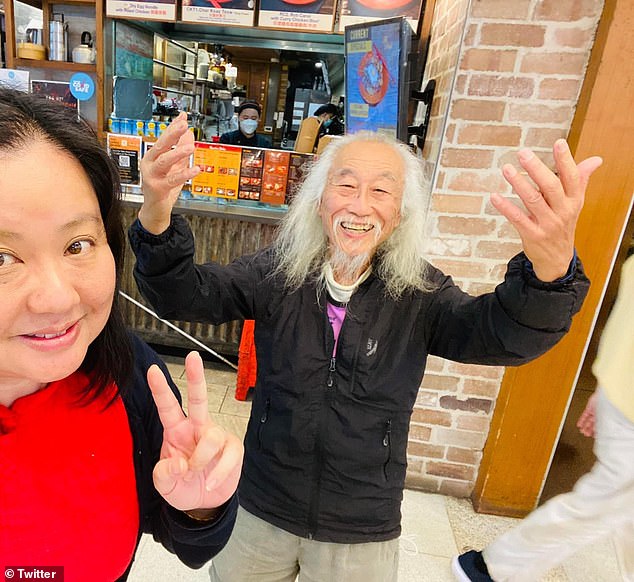 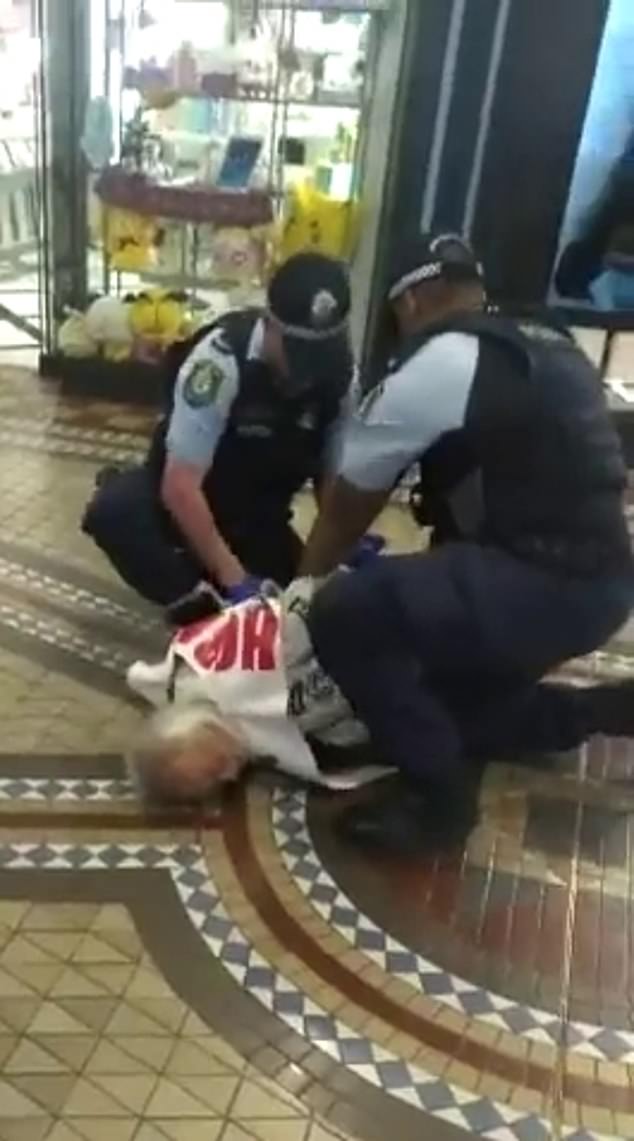 Lim, 78, was taken to St Vincent’s Hospital at Darlinghurst on Tuesday after he was forced to the tiled floor of the Queen Victoria Building by two policemen and cracked his head. That incident is pictured

He refused to be photographed for the council website or office and requested an image of Smarty be used instead.

These antics might have been amusing to some of his constituents but Lim’s critics claimed Strathfield Council became dysfunctional due to his actions. 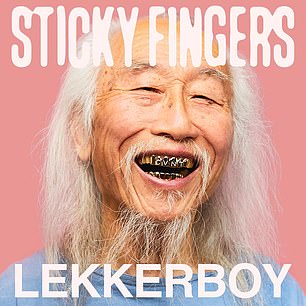 Holding the balance of power, Lim forced the roles of mayor and deputy mayor to be determined by a draw from a lolly jar when voting was deadlocked.

He inundated council staff with more than 100 motions and won a no confidence vote against the mayor.

Lim opposed the culling of feral cats and campaigned for the provision of bibles in council offices.

He quit the council after voters made death threats against him and Smarty.

Lim went on to run for the Senate at the 2016 federal election but received just 465 votes as an independent.

He had a tilt at a NSW upper house seat in 2019 and got only 644 votes after calling for pill testing at music festivals and pets to be allowed on public transport. 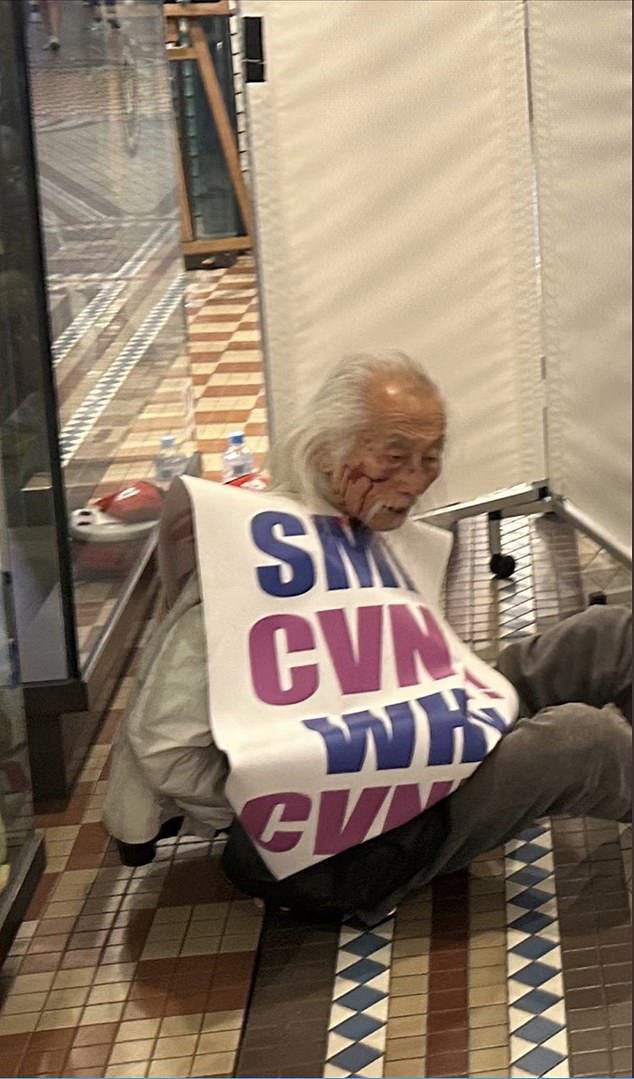 An investigation into Lim’s attempted arrest is underway and he has since been reunited with Chihuahua-Pomeranian cross Smarty, his constant companion. He is pictured bleeding on the floor of the Queen Victoria Building on Tuesday 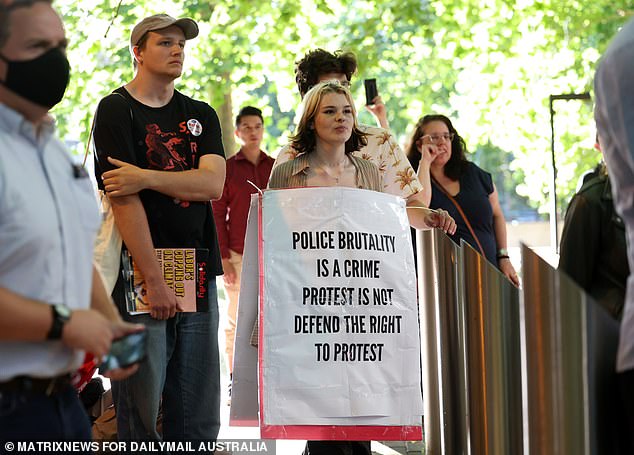 Protesters took to the streets after Lim ended yup in hospital at the hands of police, defending his right to protest and decrying ‘police brutality’ against the 78-year-old

Lim has proved more popular on social media, where Danny’s Page on Facebook has 22,000 likes and 23,000 followers.

Having campaigned for marriage equality, he was honoured with his own float in Sydney Gay and Lesbian Mardi Gras parade up Oxford Street in 2016.

Lim made his film debut in a small role as a storyteller alongside Smarty in this year’s fantasy romantic drama Three Thousand Years of Longing directed by George Miller.

He is the subject of a mural featured outside Cafe Giulia in Chippendale and features on the cover of Sydney indie rock band Sticky Fingers’ latest album Lekkerboy. 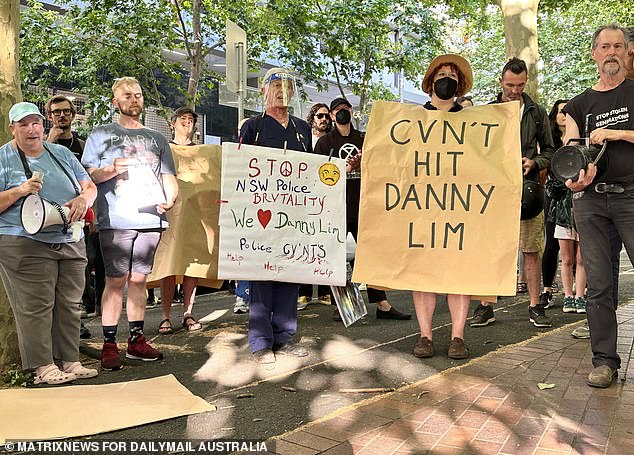 ‘Sometimes there’s people on this earth that shine their light in a different shade,’ the band wrote on Facebook to explain putting Lim on the cover.

‘Danny Lim is a guerrilla protester, a beaming Inner-west icon, a person for the bloody people. And he does it Every. F***en. Day without getting paid.

‘Bless you mate. We couldn’t think of a better spiritual soul that encompasses our thoughts.’

Similar sentiments were shared by scores of supporters who gathered outside Sydney’s Day Street police station on Wednesday to protest against Lim’s latest arrest.

Many in the crowd wore sandwich boards mimicking Lim’s.

As Lim was wheeled out of hospital on Thursday he was wearing a T-shirt bearing the words ‘respect existence or expect resistance’. 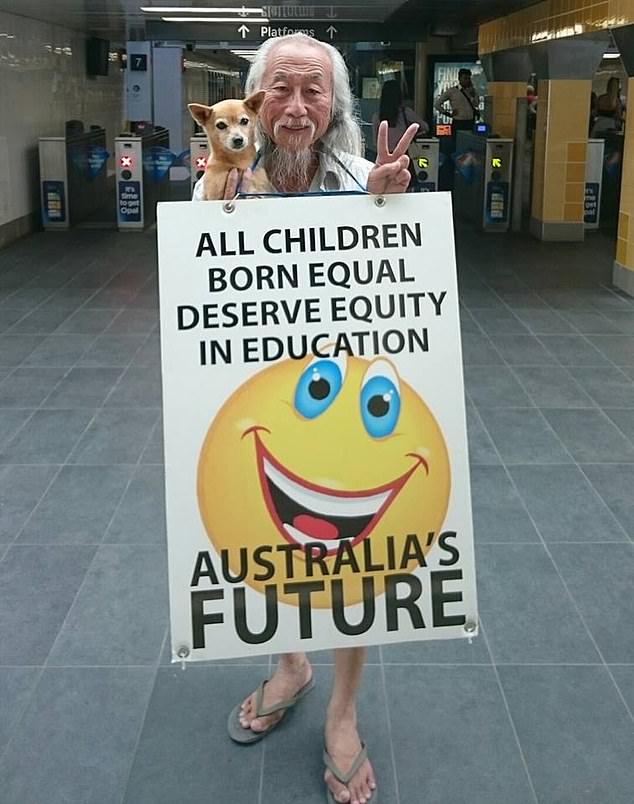 ‘Danny Lim is a guerrilla protester, a beaming Inner-west icon, a person for the bloody people,’ says Sydney band Sticky Fingers. ‘And he does it Every. F***en. Day without getting paid’

Some of Lim’s more colourful sandwich boards have landed him in trouble with the law in the past but this time his alleged crime had been not to move on when asked by police.

Lim has been a widely known and popular figure on the streets of Sydney for more than a decade, spreading his message of peace, love and happiness.

He travels the city on public transport and heads to where he thinks he is needed.

‘Usually, I go wherever the issue is,’ Lim told the Herald in 2017. ‘Say there’s a politician who’s in the news for doing the wrong thing, I go to their electorate with a sign.

‘People also come and tell you their problems. Sometimes they say, “Get a job!” and I say, “Yeah, right, I had a job before your father was born.” 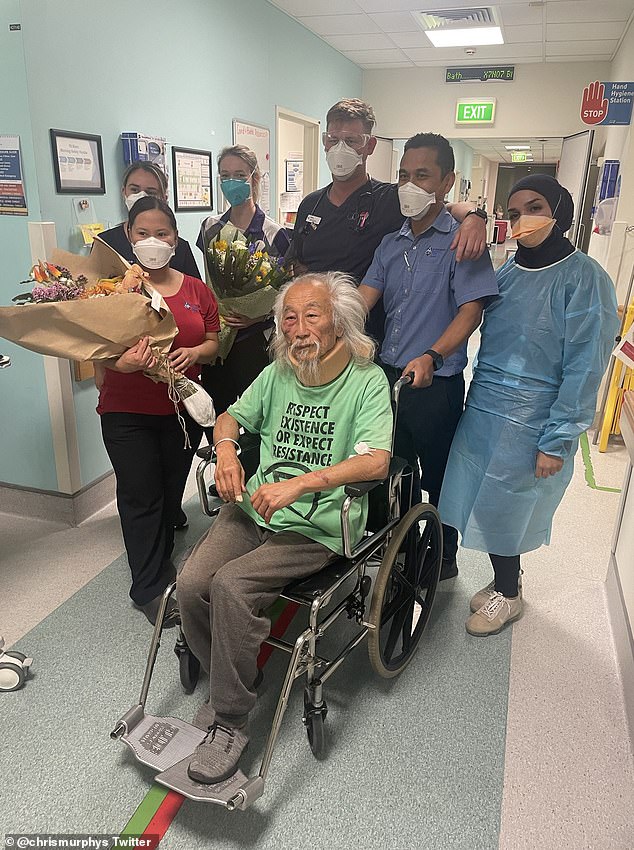 ‘Other people say, “Ching Ching go home!” Some politicians have threatened to sue me. But most people are really good. When I stopped for a while, people rang me and said, “What’s happened?” They missed me.’

Lim has also been accused of offending the public when his more politically-charged slogans have used a play on the word ‘c***’, which he spells CVN’T.

In 2015 Lim was fined $500 for wearing a sign outside Edgecliff train station which police claimed labelled then prime minister Tony Abbott a c***.

That sign read: ‘PEACE SMILE PEOPLE CAN CHANGE TONY YOU CVN’T. LIAR, HEARTLESS, CRUEL. PEACE BE WITH YOU.’

A GoFundMe appeal raised enough money to cover the penalty within an hour – Lim declined to accept the donations – and the conviction for offensive conduct was overturned on appeal by Judge Timothy Scotting in the District Court. 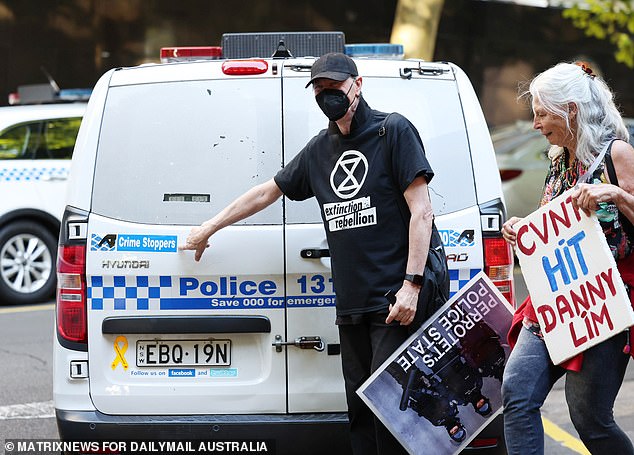 Lim has also been accused of offending the public when his more politically-charged slogans have used a play on the word ‘c***’, which he spells CVNT

Four years later Lim was arrested again and charged with the same offence for displaying another sign at Barangaroo which said ‘SMILE CVN’T! WHY CVN’T?’

That charge was dismissed by magistrate Jacqueline Milledge at Downing Centre Local Court.

Lim, who has had trouble communicating since suffering a subdural haematoma as a result of his run-in with police on Tuesday, does not see his protests as particularly political.

‘It’s not political, it’s moral,’ he once told the Herald. ‘When you see something bad being done, like corruption, you have to stand up and say, “Enough is enough!”

‘A lot of people just want to do nothing, but it’s important to be involved in civic duty, and to get people thinking.’ 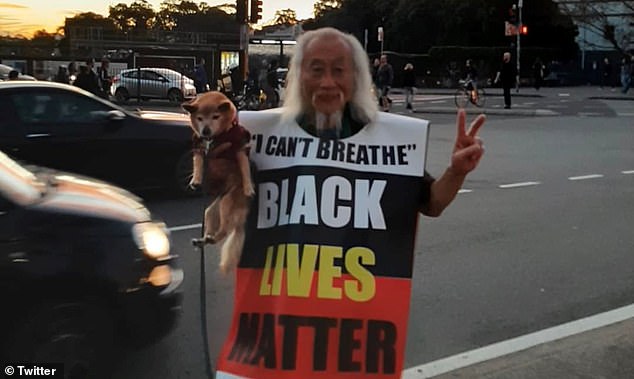 After the controversial chokehold by a NYPD officer killed a black activist in New York, ‘I Can’t Breathe’ became a slogan of the Black Lives Matter movement and Danny Lim (above) took to the streets of Sydney to give his support