Beloved Sydney icon Danny Lim has returned to the streets to share his messages of love and positivity – after he was hospitalised following a brutal arrest by police.

The 78-year-old was taken to hospital after he fell to the ground when he was arrested by NSW Police officers at the city’s Queen Victoria Building on November 22.

Mr Lim suffered bleeding to the brain from the fall, with footage of the violent arrest sparking community anger and an internal police investigation.

He has now been pictured back on the streets of Sydney, with a photo shared to Reddit showing Mr Lim on Thursday promoting a humans rights protest this weekend.

Mr Lim said he would be attending a ‘humans rights day’ protest in Newtown in the city’s inner west on Saturday.

‘For a fair dinkum ozland to smile again,’ a poster hanging around his neck read.

He’ll be joined by indie band the Sticky Fingers and the grandson of Indigenous rights activist Eddie Mabo.

The Sydneysider who shared the snap of Mr Lim said he told him he was ’60 per cent’ recovered but was ‘speaking very well’ considering his injuries.

Mr Lim was also seen clutching onto a walking stick. 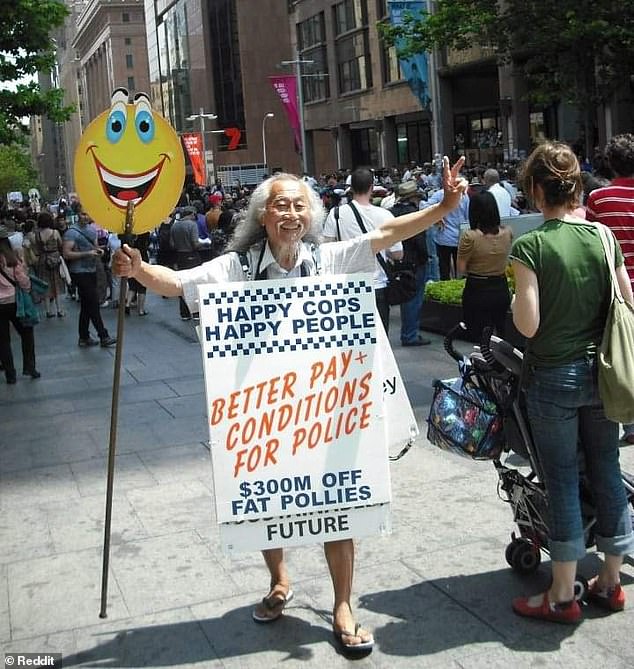 Footage of Mr Lim’s confronting arrest shows him crying out for help as he’s handcuffed and thrown to the ground.

A police spokesperson said officers ‘discontinued’ their arrest after Mr Lim’s head cracked against the tiled floors, leaving him with a subdural haematoma – a brain bleed – and black eye.

He will now require ongoing specialist medical care, and will use a walking stick.

In a statement, NSW Police confirmed that an inquiry has been launched into the incident. 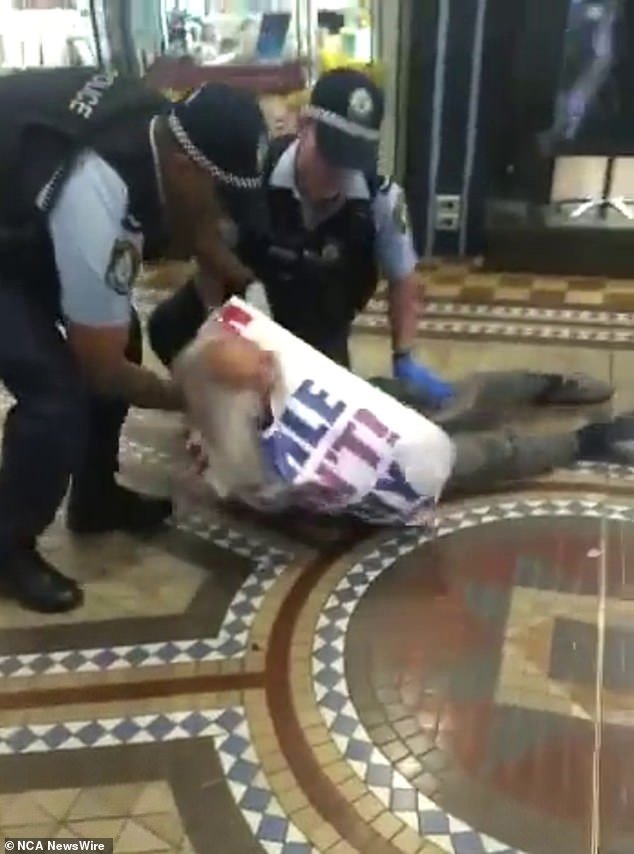 Shocked onlookers called for an ambulance for Mr Lim, after he was left with a bleed in the brain and a black eye. Picture: Chris Murphy

‘An independent review will examine the actions of police during the arrest of a 78-year-old man in Sydney’s CBD,’ the statement said.

‘As inquiries into the incident continue, an independent review has been launched, which will examine the actions of police during the incident.’

This investigation will be overseen by the Law Enforcement Conduct Commission (LECC), which monitors and investigates allegations of police misconduct.

‘The Commission will continue to closely monitor the progress of the police investigation of police contact with Mr Lim,’ an LECC spokesman said.