The last time Champions League finalists Liverpool and Tottenham dominated Europe was 1984 when the European Cup went to Anfield and Spurs lifted the UEFA Cup.

Mail on Sunday columnist DANNY MURPHY, who played for both clubs, met up with two heroes of ’84, ALAN KENNEDY and TONY GALVIN, to reflect on a golden era and what lies ahead in Madrid next weekend. 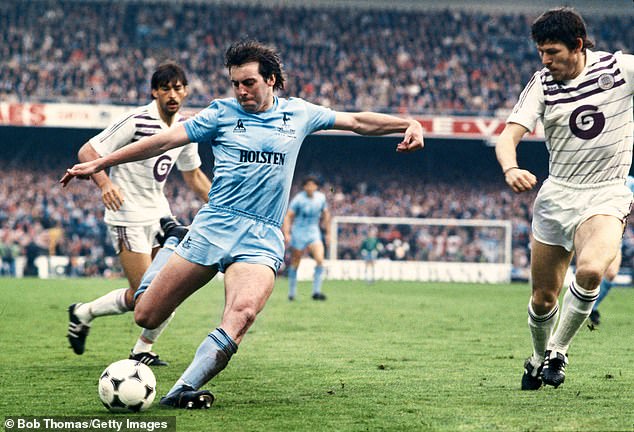 Galvin, a winger, was part of the Tottenham side that won the UEFA Cup in 1984 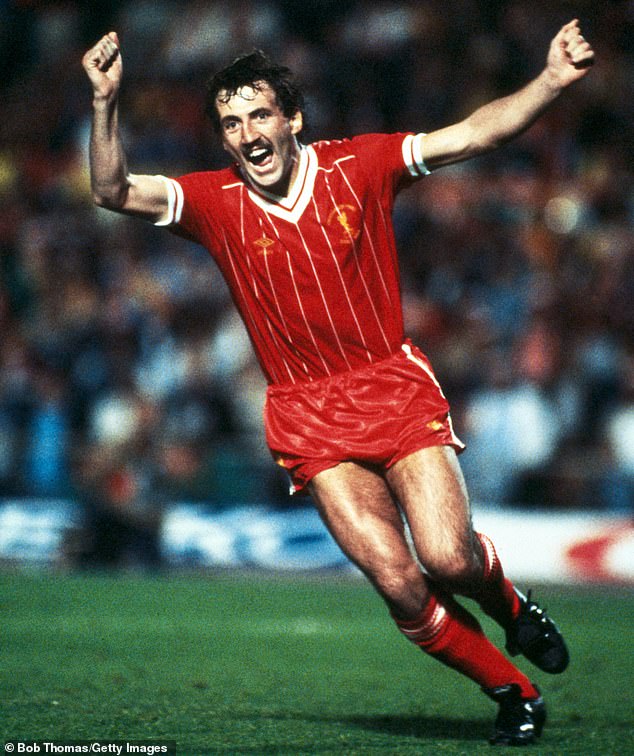 DANNY MURPHY: Liverpool winning the European Cup in Roma’s back yard is legendary, Al, and you scored the decisive penalty in the shootout.

ALAN KENNEDY: I didn’t even know I was going to be one of the takers. The manager Joe Fagan asked me after extra time if I was OK and I said ‘Yeah’ thinking it was a general enquiry. The shootout starts and I’m wondering to Ronnie Moran who is down for the fifth penalty. He says, ‘It’s you’.

I didn’t feel confident walking up, and when I put the ball on the spot, my legs were shaking. I even changed my mind during the run-up. The only thing that kept me going was thinking my b*****d team-mates expect me to miss. I’ll show them.

MURPHY: I don’t think this final will go to penalties. I can’t see Spurs stopping Liverpool in 90 minutes. Even when they push forward, they are so hard to score against. Who is going to run past Virgil van Dijk or outjump him? The only small concern is if the break may slow their momentum, but I don’t think so.

TONY GALVIN: I think it is 50-50. Tottenham have found a way against big teams in Europe. That City game at home, they were superb. They outplayed them and should have won it more than 1-0.

Our UEFA Cup final win against Anderlecht was at White Hart Lane. My over-riding memory was walking around the pitch and seeing the joy on people’s faces. And we did it without Glenn Hoddle [injured] and captain Steve Perryman [banned]. 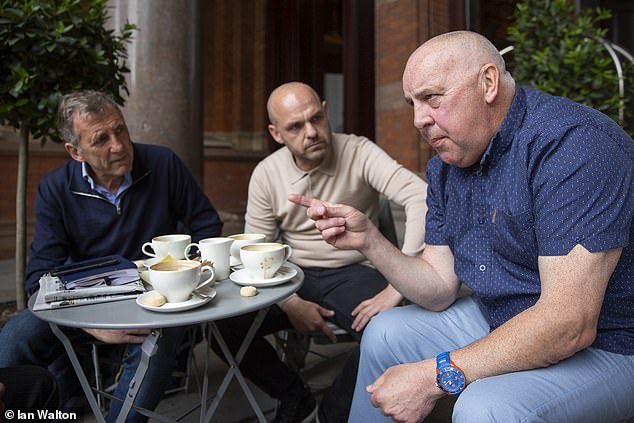 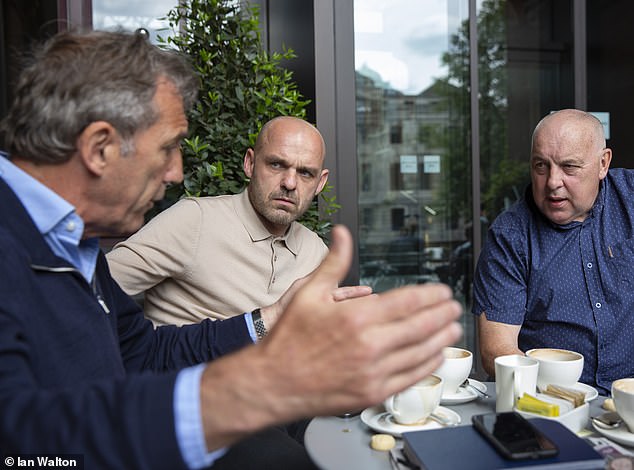 MURPHY: Parallels with this season as Spurs have reached the final without Harry Kane and Harry Winks. Kane is talking like he can play. But how can you leave out Lucas Moura? He scored a hat-trick against Ajax in the semi!

GALVIN: If Mauricio Pochettino thinks Harry is 100 per cent, I think he will start. Lucas may have to do it off the bench. Harry can have a month off and come back full of energy.

KENNEDY: That’d be tough on Lucas, he’s so direct with that pace and low centre of gravity. I’ll give him a number for my mate David Fairclough, the original super-sub. He always said the manager had to play what he thought was his strongest team.

I was at Liverpool seven years and won five league titles. But I wanted seven — we were greedy. That was the mentality. We weren’t trying to create history, just win the next one.

GALVIN: Perryman was like that but we didn’t have enough across the team, so we’d drop silly points. Liverpool had some tough cookies. Jimmy Case wound me up so much after he went to Brighton I kicked someone else and got sent off.

Graeme Souness was a great player but naughty. The worst tackle I ever received was from him in the 1982 League Cup final, and that includes my time in non-League.

MURPHY: The only player who wound me up to get a red card was on my own team, Jamie Carragher! We were playing Manchester United and he was in my ear the whole time: ‘Go on, go on’. I ended up going in late on Denis Irwin and got sent off. The manager Gerard Houllier mullered me after.

The Champions League format has changed since the old European Cup and people say it’s easier to win. But it’s not really relevant, to be champions of Europe means the same to the players and fans.

KENNEDY: I look back and think how little we knew about the opposition from places like Bulgaria or Greece. We had a scout called Tom Saunders who would go and watch them, once. That was it, no video clips or data.

MURPHY: It’s the other way now. 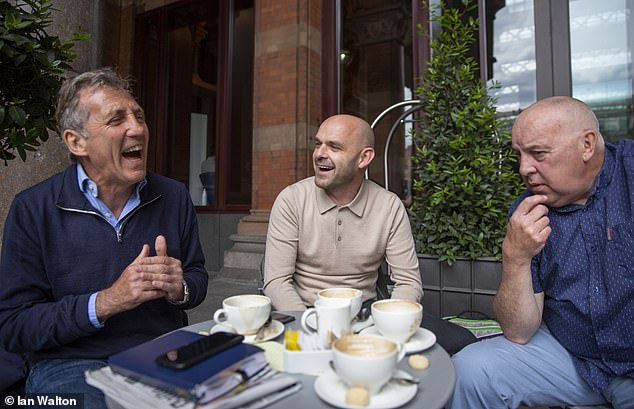 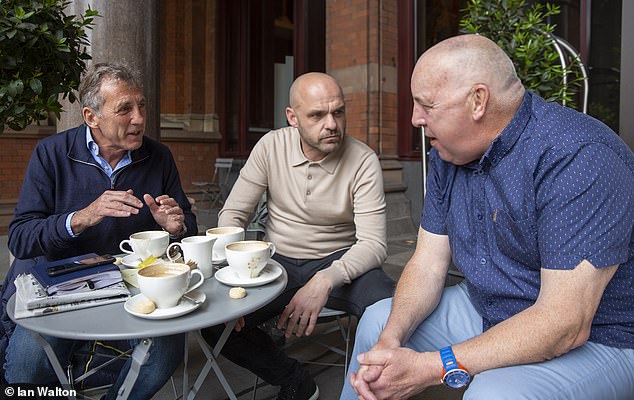 KENNEDY: You can have too much information. If I was playing against Johan Cruyff, I wouldn’t want someone going on about the brilliant things he could do.

GALVIN: Liverpool and Spurs know everything about each other. Our fans are gobsmacked to be in the final. They expected to go out against Manchester City and it looked like curtains at Ajax.

MURPHY: People see this as a free hit for Spurs but it’s bigger for them than Liverpool. I know Liverpool need a first trophy under Jurgen Klopp but whatever the result they’ll be challenging next season.

A Spurs win proves to Harry Kane and Dele Alli they don’t have to go anywhere else to win big trophies. But if they lose, the pressure for Spurs to spend this summer to show ambition will be huge.

GALVIN: People don’t realise that Spurs have built this team over years. Christian Eriksen, Jan Vertonghen, Hugo Lloris, they were all here before Pochettino. Now they’re in the final, it’s a big moment. The one they have to keep is Eriksen. After Harry, he is the main man. I believe they have offered him a big deal to stay.

MURPHY: He should. I don’t think he would get in the team at Barcelona or Real Madrid. I think Eriksen has looked a bit nervy in big games, as though he was on show.

GALVIN: But even off form, he’ll still do a couple of things to change a game. Tottenham’s new stadium is a big thing. The atmosphere against City was brilliant. If the game had been at Wembley, I don’t think Spurs would be in the final.

MURPHY: I am fascinated to see if Poch goes with four at the back or wing-backs. I think Kieran Trippier is vulnerable against Sadio Mane in a back four.

KENNEDY: How Mane gets into those scoring positions, I don’t know. His movement has been fantastic and his team-mates have given him the ammunition, particularly the crossing from full backs Andy Robertson and Trent Alexander-Arnold.

GALVIN: Liverpool needed a last-minute goal to beat Spurs 2-1 at Anfield. Spurs should have come away with something and their second-half display will put them in a good frame of mind for Madrid. 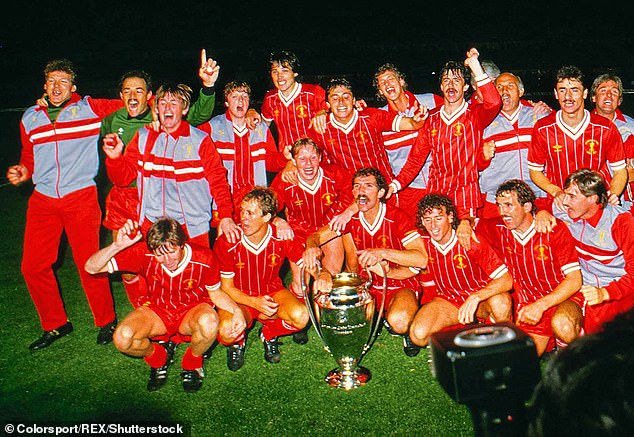 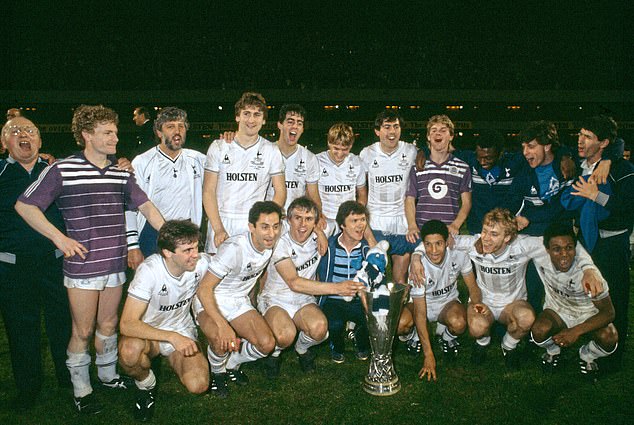 KENNEDY: You need leaders like Virgil van Dijk and Jordan Henderson. That person who will tell you ‘Come on’. Steven Gerrard would have done it in your time. I had Ronnie Moran shouting at me from the sidelines!

GALVIN: I played wide just like you Alan. When you were on the same side as the dug-out it was 45 minutes of abuse.

MURPHY: Most of Liverpool’s XI picks itself. The biggest decision is midfield. I’d have Jordan Henderson, Fabinho and Gini Wijnaldum which means James Milner missing out, a tough call. But it would be wrong not to play Henderson.

KENNEDY: The lad has upped his game. He used to play sideways a lot, now he gets in the box and the players are tuned into that.

MURPHY: What is great about Liverpool’s midfield is if they see Alexander-Arnold and Robertson bombing on, they don’t mind filling in, so you’re never a man down. 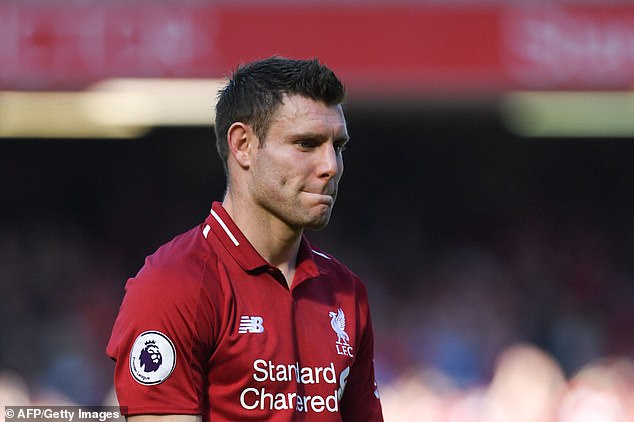 KENNEDY: I’d agree with your selection Danny, but Milner is great at covering and spotting things that are about to happen. Wijnaldum was a hero with his two goals against Barcelona and Fabinho’s size helps. He is tall enough to win headers, as well as other qualities.

GALVIN: Spurs would prefer to see Henderson sitting it out. He is in your face and if there is one thing Spurs struggle with it’s people getting right on top of them and not allowing any time.

Moussa Sissoko has been a big plus for Tottenham. He used to get stuck out wide and would run into people. He’s tucked in a bit now and has a brilliant engine. It was his long ball that set up the third goal against Ajax.

This generation of players are better prepared for penalties than we were. We did practise but it’d just be a mess around after training. Luckily against Anderlecht our goalkeeper Tony Parks was one of these confident young lads who fancied himself.

KENNEDY: I see Liverpool went to Marbella last week. We had a longish break before the final in ’84 and went to Israel to play a friendly. There were gunships going past us when we trained. One evening we went out and had a few drinks. The Italian press made a big deal of it.

MURPHY: I remember Steve McManaman telling me Real Madrid had a couple of beers the night before one of their finals, against Valencia I think [in 2000].

Every season the fixture list is different. In 2001, we won the FA Cup and UEFA Cup but couldn’t celebrate because we still had a league game at Charlton we needed to win to qualify for the Champions League. 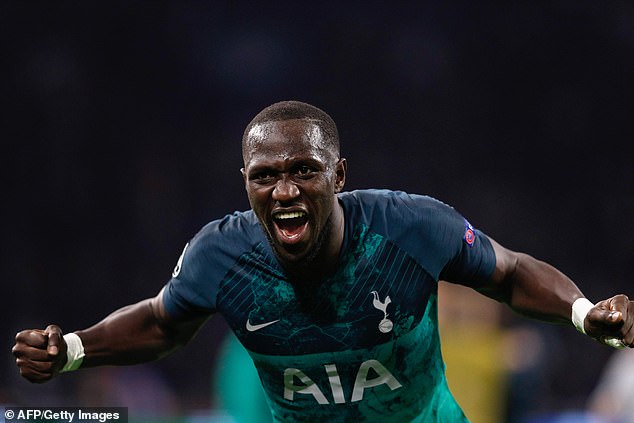 We beat Charlton 4-0 and on the coach home, we pulled up at Tesco. There was this sight of Robbie Fowler and some of the other Liverpool lads in tracksuits pushing supermarket trolleys loaded with crates of beer!

GALVIN: Ironically, Liverpool and Spurs went to Swaziland in 1984 to play each other after winning the European trophies. Liverpool treated it as a p***-up. I’d not seen that kind of togetherness before, nobody would go to bed until they all did.

At a charity dinner, Alan Hansen was guest of honour and he wellied a football into the chandelier! The night before our match, all the Liverpool lads stayed up until the early hours and still thrashed us. It was really hot and they just kept the ball, they weren’t even trying. 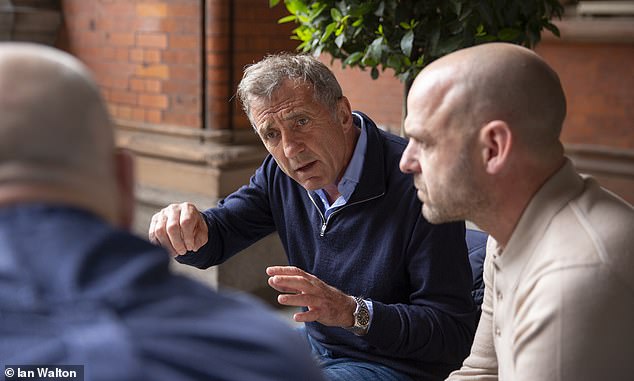 Kennedy revealed that he only received £67,000 when Liverpool won three trophies in 1984

KENNEDY: That season, 1983-84, was my highest earning in football. I got £67,000 — that’s wages plus bonuses for winning three trophies: the First Division, European Cup and League Cup.

MURPHY: I think the memories are always about what you won, not the contract you signed. At the time, you don’t even properly realise what you’ve achieved. It sinks in when fans come up with their own stories of a final. You realise how lucky you were to be part of it.

KENNEDY: People talk about my winner against Real Madrid in the 1981 European Cup final or the penalty in Rome but if we’d lost, they wouldn’t be remembered. The Liverpool players will know that on Saturday. After my first game, the chairman told me: First is first, second is nowhere. And he meant it.

GALVIN: From a Spurs perspective, this is the biggest game in the club’s history. If these players win, they’ll never be forgotten. They will deserve statues.