Not even severe weather warnings could deter brave surfers from risking their lives on the monster southerly swell that pummeled Sydney’s coastline for a second consecutive day.

Sunday’s dangerous surf conditions along the New South Wales coast from Byron Bay in the north to Eden in the state’s far south weren’t for the faint-hearted.

The worst of the conditions were in Sydney with five metre swells and ‘rogue waves’ up to 10 metres. 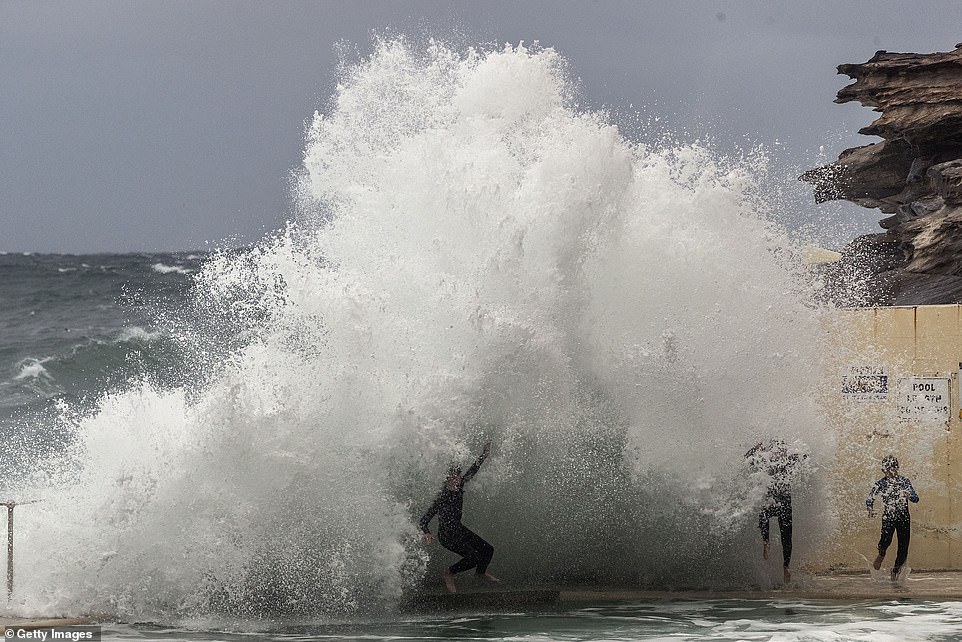 Further south, these brave youngsters were almost wiped out by the massive waves at Bronte in Sydney’s east

Further south at Bronte, three youngsters were lucky not to be swept away by massive waves that crashed into the ocean pool.

‘Five metre waves have been observed along Sydney’s coastline, along with some rogue waves in excess of 10 metres, which will create beach erosion,’  Bureau of Meteorology senior forecaster Jordan Notara told Daily Mail Australia.

‘A monster southerly swell up to 4 to 5 metres and strong winds are moving up the coast today, impacting Sydney, Central Coast and Newcastle beaches,’ it tweeted.

‘While tempting to get a look, keep clear rock ledges and check your skill level before entering the water.’ 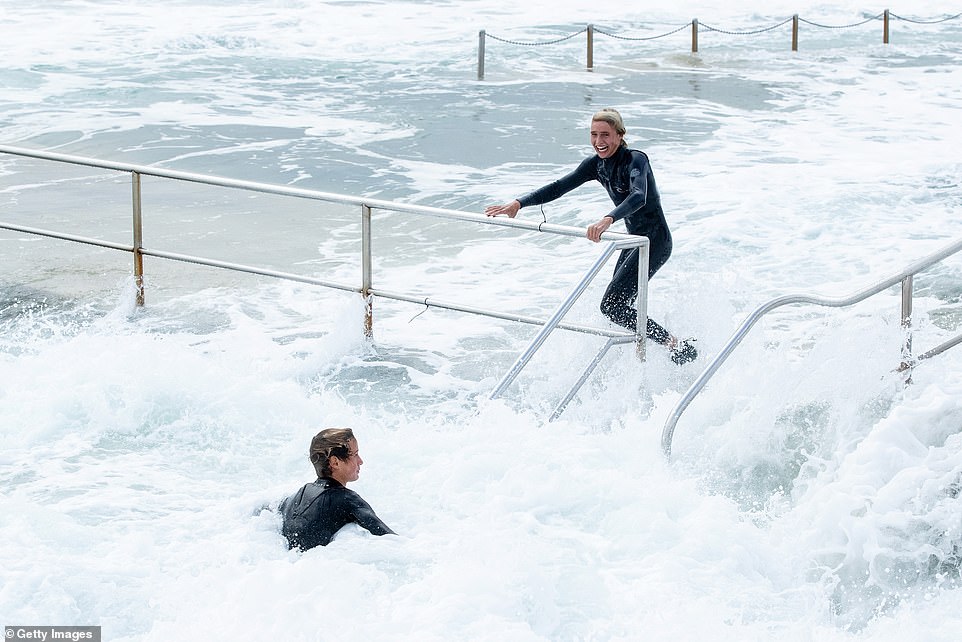 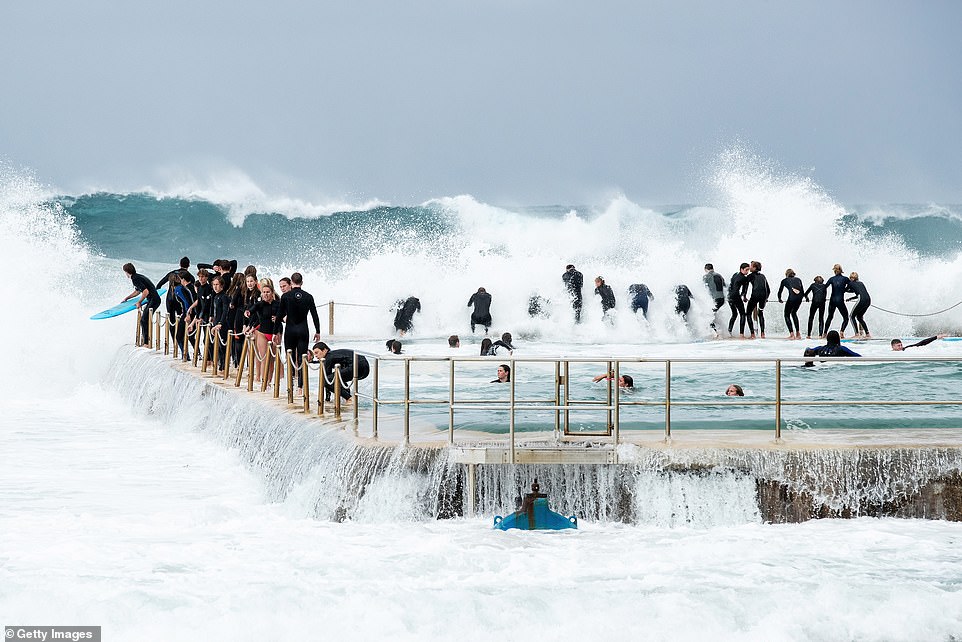 Hundreds lined Sydney’s ocean pools on Sunday to ride what’s been dubbed as the swell from hell. Pictured is South Curl Curl on Sydney’s northern beaches

The photos have emerged after brave surfers tackled the huge swells on Saturday.

Clovelly surfer Joel Pilgrim, was among those willing to take on the ‘swell from hell’ to score a ride of the massive waves.

‘You’ve got to take a few beatings to get a few waves but when you do it’s like flying down a mountain. It’s the ride of your life,’ he told the Sydney Morning Herald.

Bondi Rescue lifeguard Chase Hardaker, 18, added: ‘You just skim down it and there’s no exit, you just wait for white water to just swallow you up at the bottom. You just look up and wait to hit you in the back. 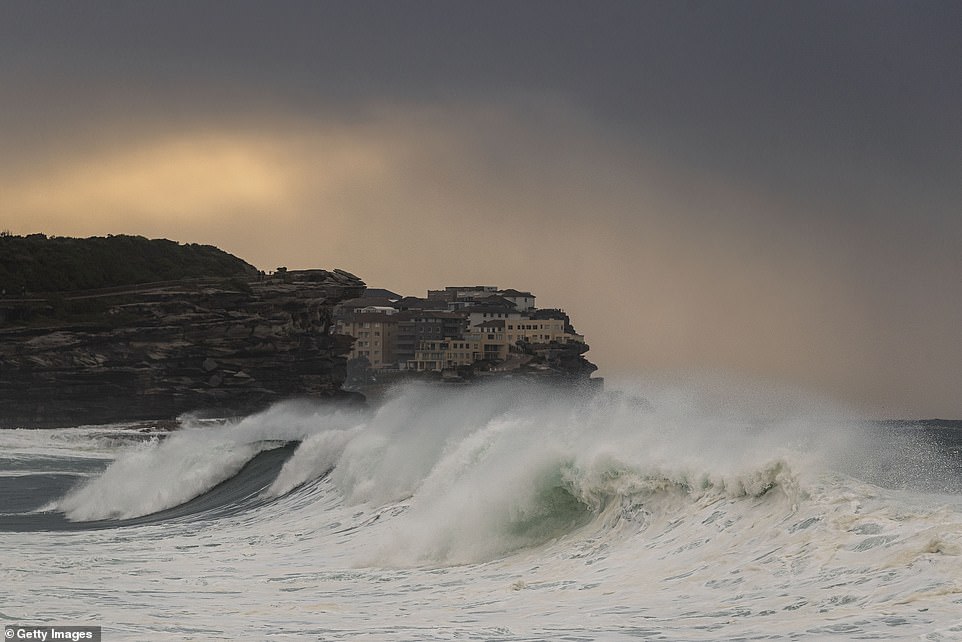 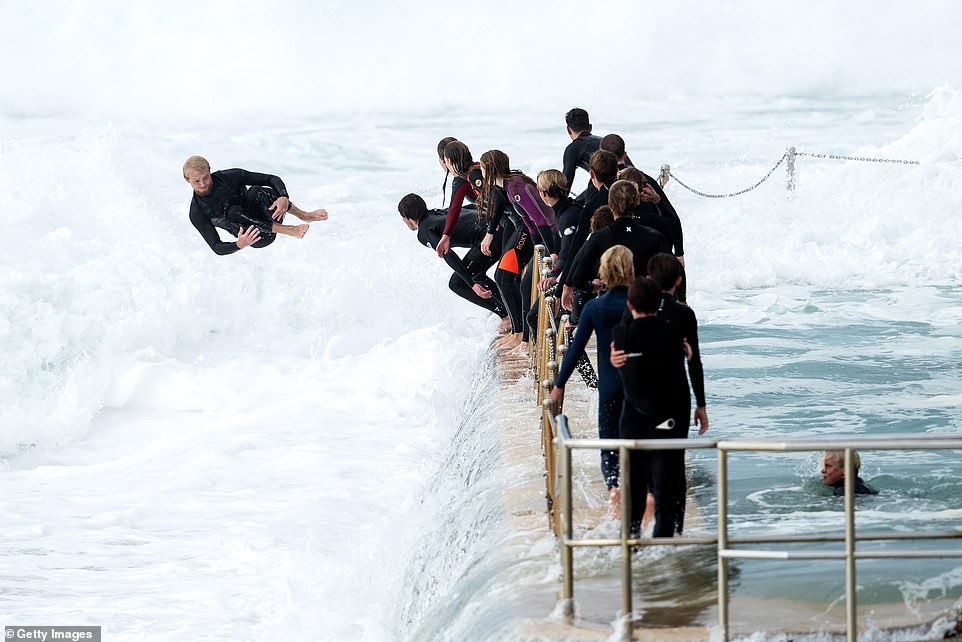 ‘I was just waiting for it thinking ‘these beaches are going to get torn apart any minute,’ Mr Carroll said.

It comes after hazardous surf and marine wind warnings were issued for the NSW coastline from Eden on the far south coast to Byron Bay on the far north coast for this weekend.

‘It will create extremely dangerous conditions for swimmers, surfers, rock fishers and boaters.’ 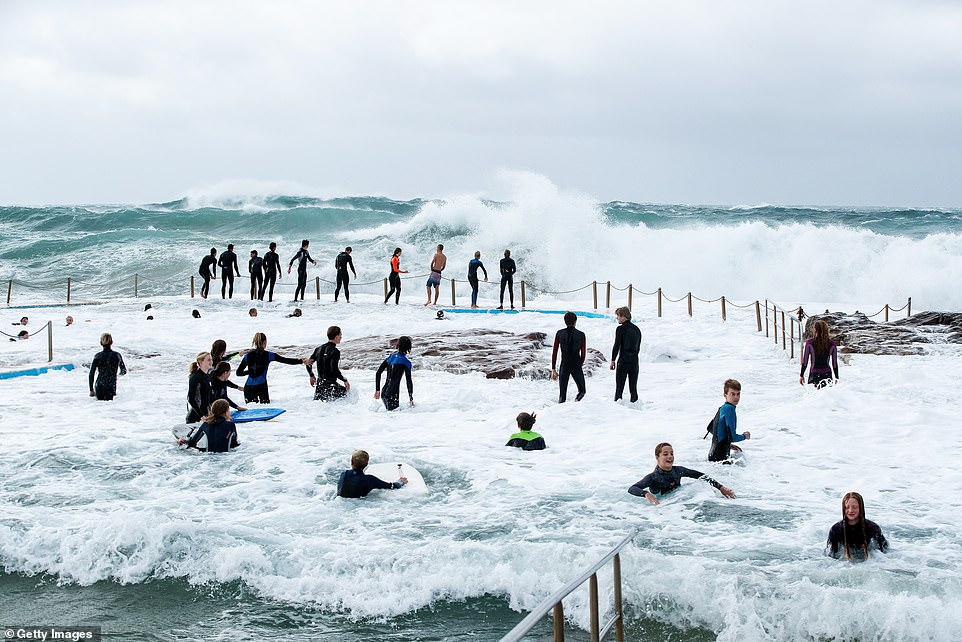 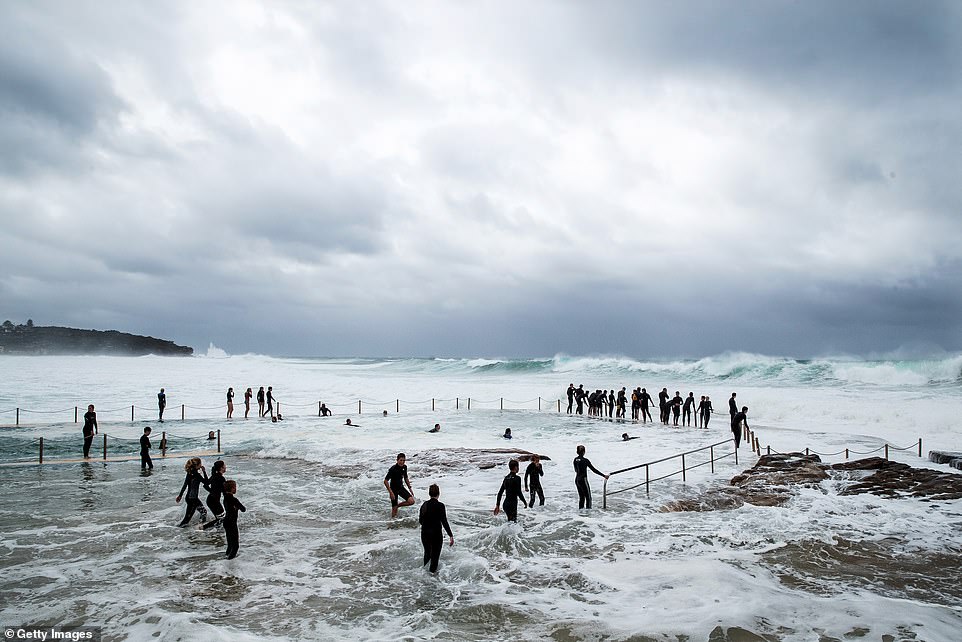 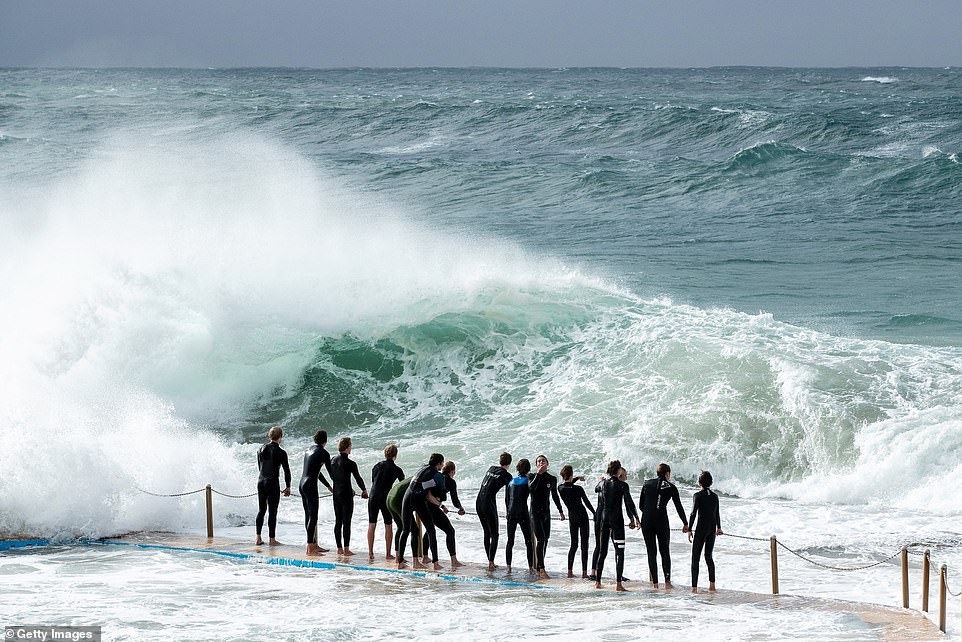 The worst of the conditions were in Sydney, where there were reports of rogue waves up to 10 metres

The Bureau of Meteorology warned the hazardous surf conditions will remain until at least Tuesday.

‘The warning will remain in place for much of the NSW coast until Tuesday.’

On the other side of the country, surfers are enjoying similar wild conditions after ex-category one tropical cyclone Mangga brought rain and gusty winds to Cocos Keeling Islands, off Western Australia’s north-west coast.

The remains of the system are expected to combine with a cold front to the south, creating dangerous weather, with wind gusts up to 100 km/h possible for nearly the whole of the west coast. 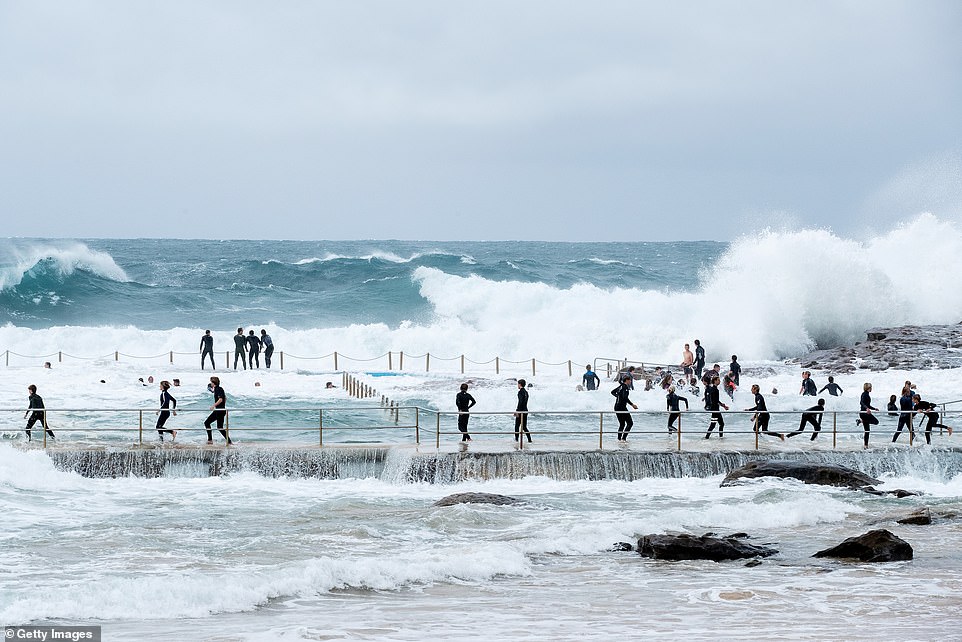 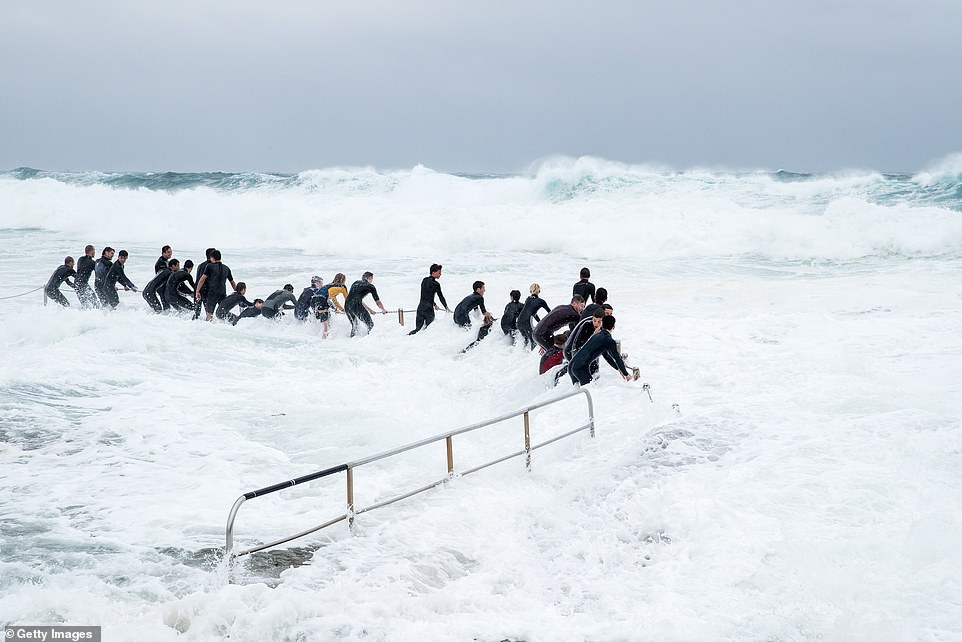