A mother-of-two who lost her leg to bone cancer when she was a teenager has revealed what life is really like living with a prosthetic limb.

Dareen Barbar, who is now based in Dubai, had her leg amputated above the knee at the tender age of 15 after she was diagnosed with an aggressive osteogenic sarcoma.

From there, the then-teenager – who was growing up in Lebanon – suffered an ‘identity crisis’ that led her to fall into the grips of depression.

And against all odds, she went on to lead a fulfilling life – starting a family, falling pregnant, learning how to drive, finishing a marathon, completing her studies and getting into her profession.

But the journey hasn’t been smooth sailing for the now-39-year-old, who lives in Dubai with her family, as she opens up about the challenges she faced growing up.

Following her leg amputation, she said she no longer had a sense of identity after going through a ‘spell of depression’. 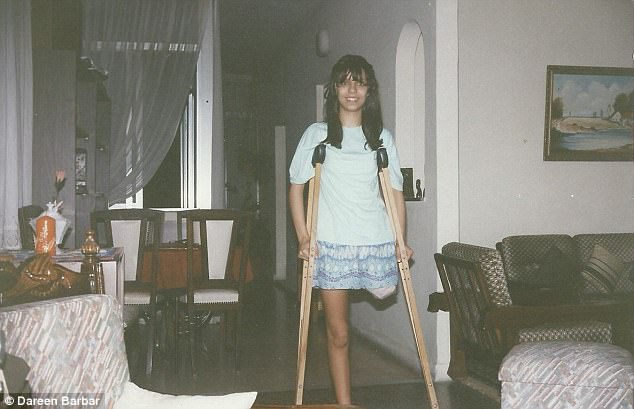 ‘I wasn’t sure who I was because of the amputation,’ she told FEMAIL.

‘It took me a long time, and more tears than I can count, to realize that I was the same person as I had been previously.’

For most part of her childhood, Ms Barbar said she feared for her life because she was living near the war zone in Lebanon.

‘Growing up in Lebanon was very difficult, especially during the war,’ she said.

‘I spent most of my childhood feeling unsafe and afraid that I might get hurt, be disabled, burned or killed, running away and hiding from bombs.’

But after surviving the war in 1990, she began experiencing excruciating pain on her leg, during which she assumed would go away.

‘I felt pain in my leg that I thought will go away with a bag of ice every night… But it didn’t,’ she said.

‘I was 15 at that time, imagine yourself being a teenager at school, happy to be admired by everyone, looking forward to my high school years and university.

‘Imagine feeling energetic and enthusiastic about life, being on the basketball team and talking with your girlfriends about boys, parties, clothes, and dreams.’ 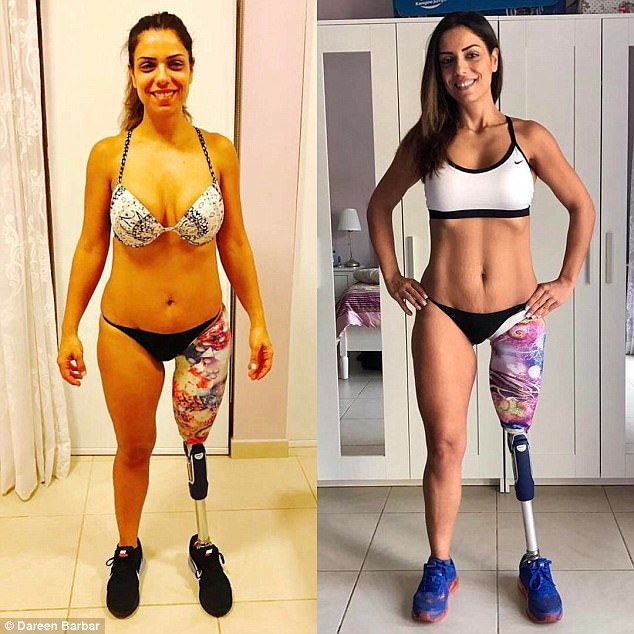 But her ‘dreams’ were shattered after her life dramatically changed at the age of 15.

‘Life was postponed,’ she said.

WHAT IS OSTEOGENIC SARCOMA?

Osteogenic sarcoma (also known as Osteosarcoma) is the most common type of cancer that develops in bone.

Most osteosarcomas occur in children and young adults. Teens are the most commonly affected age group, but osteosarcoma can occur at any age.

In children and young adults, osteosarcoma usually develops in areas where the bone is growing quickly, such as near the ends of the long bones.

Based on how they look under the microscope, osteosarcomas can be classified as high grade, intermediate grade, or low grade.

The grade of the tumour tells doctors how likely it is that the cancer will grow and spread to other parts of the body.

The shock diagnosis led to the then-teenager undergoing gruelling rounds of chemotherapy for the next seven months.

‘I started to question God, why me, what did I do to deserve this, my dreams and ambitions become far and unsure, I was so scared.

‘But at the same time I wanted my leg to get amputated because of the pain.

‘Living in Lebanon was very challenging for everyone, the county was coming out of the war, people didn’t have and still don’t have the minimal rights and facilities, so imagine how much more challenging it would be for me.

‘I used to live on the sixth floor, sometimes I had to climb stairs or wait for hours until I could use the elevator.

‘There were no assigned parking spaces for disabled people, so I had to walk long distance if I didn’t find near parking.

‘So all that kept me struggling emotionally and physically until I moved to UAE where life has been so much easier.

‘It took me a long time to realise my other abilities and blessings, it didn’t happen overnight, and I had my families support and love.’ 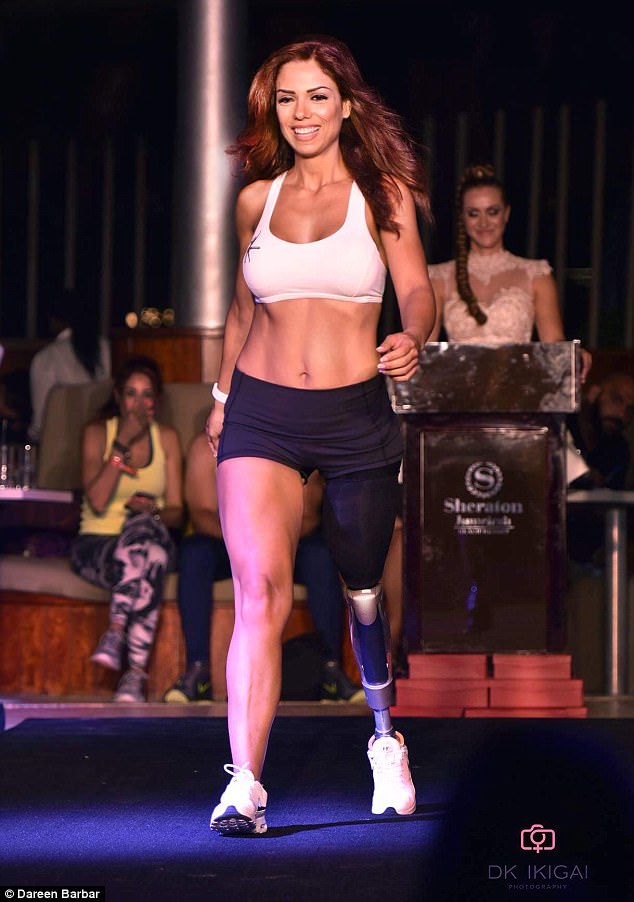 She went on to lead a fulfilling life – starting a family, falling pregnant, learning how to drive, finishing a marathon, completing her studies and getting into her profession

Before losing her leg, the young woman was an aspiring basketball player.

‘I was passionate about basketball, I used to play for the school’s team,’ she said.

‘But after the amputation and because of the primitive prosthesis I was wearing, it limited my options.

‘Walking was by itself challenging and painful, so I didn’t have any options in sports except swimming.’

Like any teenage girl, Ms Barbar said she struggled with body image where she would feel insecure about herself. 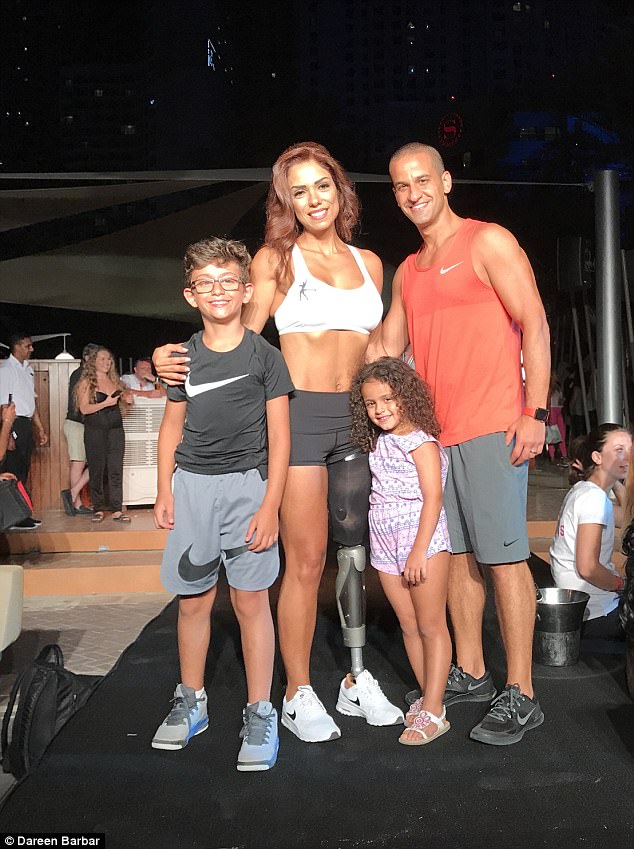 The 39-year-old mother now lives in Dubai with her husband Ramzi Gholmieh – and they have two children together – nine-year-old son Emilio and daughter Katie, aged five

‘Of course I needed to believe in myself again, I had to learn to accept and love myself the way I am and be confident about what I am and what I can become. But it wasn’t easy,’ she said.

‘I came to terms with the hardships of moving around with an artificial leg that was a primitive one which took around 30 minutes to put on with some pain and stress.’

Another challenge she faced was trying to look for work.

‘I went to many interviews, but the moment I tell them I had an artificial leg I get the look of “sorry you are not good enough for us”,’ she said.

‘My brain is still there, I can do the job. I wanted to give up, and give in to my feelings of disappointment. But I learned that there are no excuses in the path to success.

‘If we want to succeed at something we put 100 per cent in it, and never say it’s impossible, there is no empowerment, no support, or no resources. So I kept going to interview after interview until I got the job.’ 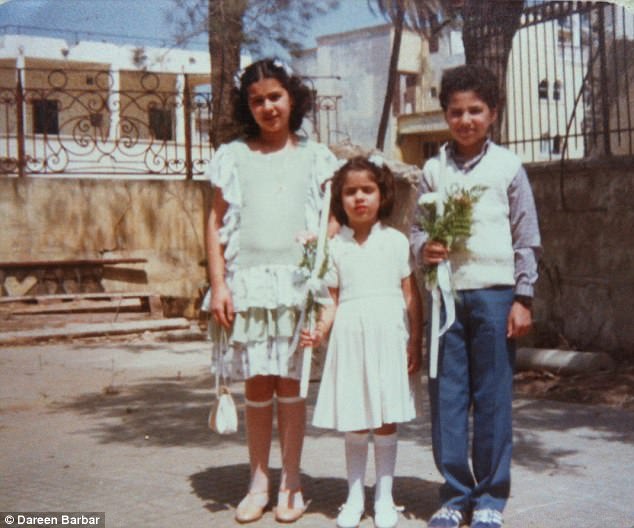 She tied the knot to her now-husband Ramzi Gholmieh – and they have two children together – nine-year-old son Emilio and daughter Katie, aged five.

Ms Barbar said her pregnancy was a ‘new kind of hardship’ because she needed to be cautious walking around with her unborn babies.

‘I had to be much more careful with every step I take not fall or slip so that not to hurt myself or my child in my belly,’ she said.

‘The last two months-and-a-half of it, I stayed usually home and hardly moved because I didn’t want to put myself or the baby at risk,’ she said.

‘But the result of having a baby in your arms would make you forget that not so fun pregnancy. But as they say, nothing comes without a price. 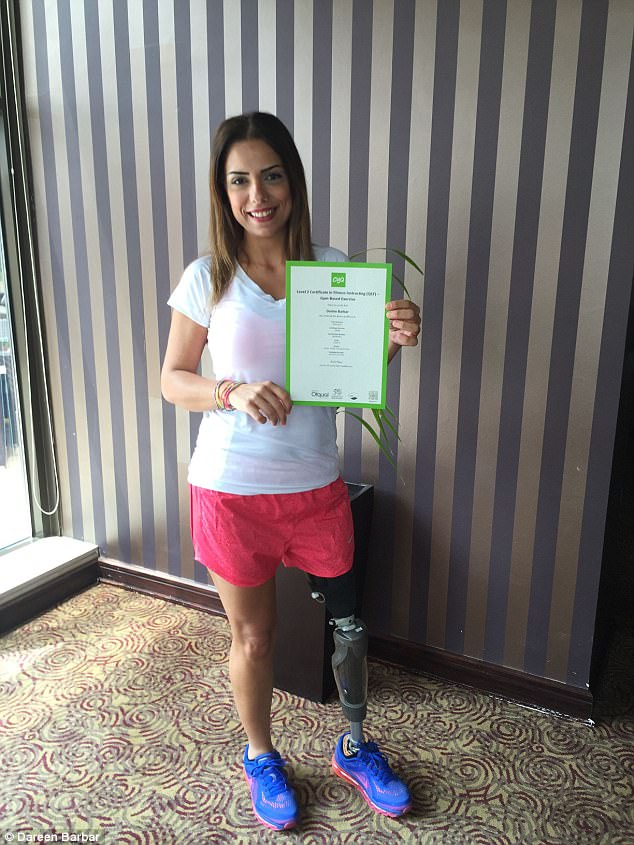 ‘The weight was building up on my body and with the hectic process of taking care of babies and raising them and taking care of a house, as a mother you forget yourself sometimes, well most of the time.’

Six months after giving birth to her daughter in 2013, she fractured her hip on the side of her amputation after falling over in her kitchen.

‘It was a devastating experience. I thought I will never walk again, doctors told me I had to stay in the wheelchair for three months until my hip is recovered,’ she said.

‘During these three months, I had the time to reflect and evaluate my life, where was I going with my unhealthy lifestyle, how I let myself become a slave to fast food and sugar and not exercising.

‘I was ruining my body and my life and of course my family. The doctor said that I cannot afford to ever fall again since my bones are not very strong. 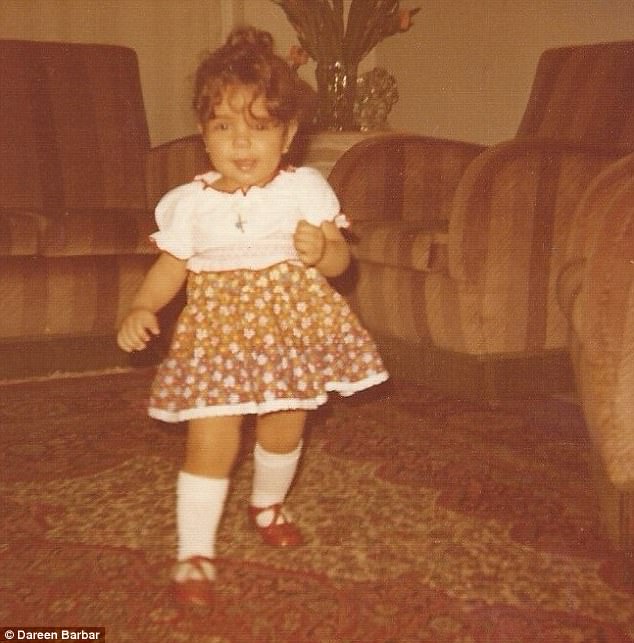 For most part of her childhood, Ms Barbar said she feared for her life because she was living near the war zone in Lebanon

And so she underwent rehabilitation and started going to the gym everyday and following a healthier lifestyle.

‘I trained myself to think of me first and wake up every day with a plan to make it happen. I lost 25 kilos and I was able to put on the new prostheses and walk again.

‘Painlessly and efficiently. It was an amazing feeling to feel safe with every step I take, the fear of falling down was diminishing little by little.

‘Now I that I know my body well and how it feels to be extremely fit, I do my best to stay in shape, I exercise four times a week, I eat healthy food during the week and I have a cheat meal every weekend.’

She also took part in a four-kilometre marathon in Dubai in January 2015.

‘It was a big achievement for me because I never walked that distance all at once in my life as an amputee,’ she said.

‘I became passionate about going to the gym and since living as an athlete is essential to me to keep my physical strength and strong stamina I got a certification as a gym instructor.’ 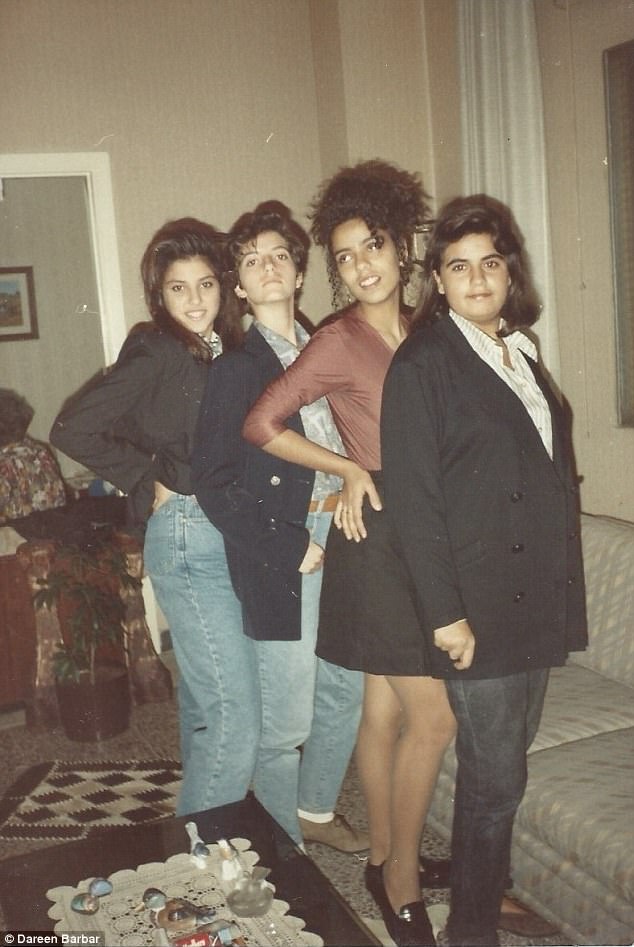 Despite her whirlwind life, Ms Barbar said she was always ‘determined’ to chase her dreams and ‘build a future for myself’

And despite her whirlwind life, Ms Barbar said she was always ‘determined’ to chase her dreams and ‘build a future for myself’.

‘I completed my education and earned a diploma from YWCA and started a career as an insurance professional. I even got a car and started driving myself too,’ she said.

‘I was chosen to be among the forty most inspiring women from the Gulf in 2010.’

By telling her story, she hopes other amputees would draw hope from her experiences.

For those who feel insecure about body image, Ms Barbar advises: ‘Learn to love yourself’.

‘We have the ability to change if we believe in ourselves, put the effort in it and adapt to any situation that we face in life,’ she said.

‘Insecurity comes from our desire to get accepted by other people’s standards – like what the media tells us about beauty and success.

‘I believe that the world’s view of body image is changing and people are realizing finally that beauty has no shape, size or colour.

‘Learn to love yourself and happy to be you, eventually people will see you confidence and love it, because confidence is beauty.

‘There is no limit to how much we can achieve in life.’