The number of patients who paid for private operations soared by more than a third as NHS waiting lists climbed to a record high, official figures reveal today.

Patients spent £126million on hip replacements, knee replacements and cataract surgery between July and September, the most recent data available.

But doctors warn many of those needing non-Covid care are getting ‘significantly worse’ while they wait, with 311,528 waiting for over a year.

Charities say long delays have left people in crippling pain, forcing them to raid savings, plunge themselves into debt or seek public donations to cover the cost of their care.

Self-funded treatment has risen by 35 per cent compared with pre-pandemic levels, with the number of private hip replacements alone almost tripling

Now data from the Private Healthcare Information Network (PHIN) – shared exclusively with the Daily Mail – lays bare the devastating scale of the problem.

The government-backed body has had a legal duty to collate comprehensive data on private healthcare activity since 2016.

Cataract surgery rose by 64 per cent, from 9,100 to 13,200. All figures exclude bills settled by private medical insurance.

A private hip replacement costs an average of £12,402, a knee replacement £13,103 and cataract surgery on one eye £2,574, according to market analysts LaingBuisson. 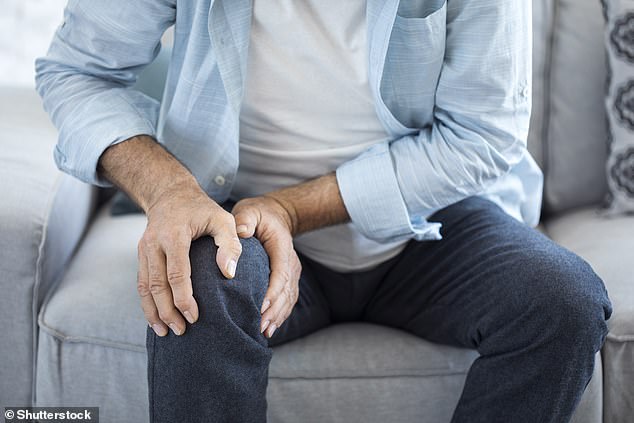 The cost of going private

It suggests patients spent a total of £126.3million on these three procedures alone over a period of just three months.

It comes as the number of people in England on the NHS ‘trauma and orthopaedics’ waiting list, which includes hip and knee replacements, has risen from 525,801 in September 2019 to 699,962 in September 2021.

The average wait increased from 8.3 weeks to 13.7 weeks over that period, with the number waiting more than year climbing from 365 to 63,121.

Hospitals conducted a total of 71,000 privately funded operations between April and June last year, making the most recent two quarters the highest and second highest on record.

Crowdfunding website JustGiving estimates the number of people using its service to help secure public donations towards private treatment has more than doubled in two years.

And AXA said it had seen a 20 per cent increase in new enquiries for private health insurance over the past 12 months, with existing customers also flooding its hotline to make claims.

Number of people on ‘Trauma & Orthopaedics’ waiting list in England

Almost half of Britons (48 per cent) would consider private healthcare if they needed treatment, according to a new poll by the Independent Healthcare Providers Network, which represents private providers.

Patricia Stapleton, senior policy manager at Versus Arthritis, said: ‘When people with arthritis are initially referred for a joint replacement, they’re already struggling to walk, remain employed and live free from pain.

‘Tens of thousands have been languishing in this waiting list limbo for years now and have little left to give, while thousands more join them each month.

‘It’s impossible to ignore these agonising waits, and many see paying for surgery as their only hope.

‘It can cost up to £16,000 to have your hip replaced, and we’ve heard from people who’ve borrowed money from family, resorted to crowdfunding, or drained their savings accounts to find the money.

‘But people with arthritis should not have to “choose” between long waits or financial instability to access joint replacement surgery – these are some of the most cost-effective operations on the NHS and can work brilliantly to restore a person’s quality of life.

‘Increasing the NHS’s capacity to deliver more joint replacements across the UK is key to ending the years of pain that people with arthritis endure on waiting lists today.’

Rachel Power, chief executive of the Patients Association, said: ‘Patients have suffered over the last two years and as waits for diagnostics, treatments, and surgery have grown, so have frustrations.

‘Opting for private healthcare is not a genuine choice if you’re going private because you can no longer bear to wait for NHS treatment, and especially if you’re having to borrow or use your savings to pay for that care.’

Professor Neil Mortensen, president of the Royal College of Surgeons of England, said: ‘Unfortunately, planned orthopaedic treatment has some of the longest waits in the NHS, because of the disruption caused by the pandemic.

‘Waiting for a planned hip or knee operation can be debilitating and very painful, so it’s not surprising there has been a significant increase in patients choosing to go private.

‘Sadly, we have heard of patients getting into debt to pay for their operations.

‘Meanwhile the NHS is committed to bringing down long waits, and has a target of eliminating waits of two years or more by July.

‘But it will take several years before we are able to meet the 18-week waiting time standard, which is what we all are striving towards.

‘The NHS is creating surgical hubs where more operations can happen, but there is also the challenge of staffing to contend with.’

David Hare, chief executive of the Independent Healthcare Providers Network, which represents private providers, said: ‘With NHS waiting lists at record levels and likely to continue growing, it is not surprising that many more patients across the country are paying privately for treatment, including those who would never have previously considered doing so.

‘Recent IHPN polling shows that almost half of the public would consider private healthcare, and our members tell us they are seeing a rise in private patients seeking treatment across a range of specialties including cancer, ophthalmology, and orthopaedics.

‘Given the significant pent up demand for NHS treatment, independent providers will play a major part in improving access to care in the months and years ahead.’

A spokesman for PHIN said: ‘Our data shows record numbers of people paying out of their own pocket for common procedures like joint replacements and cataract surgery.

‘However, levels of private care overall are flat, as activity levels for people who have private insurance remain lower after the pandemic.

‘It is important to understand that private care is small compared to the NHS and itself still recovering after the pandemic, so any increases in activity should not be taken to signify meaningful moves away from the NHS.’

NHS England said: ‘Despite NHS hospitals treating over 640,000 patients with COVID, staff have cared for at least two people with other conditions for every patient with the virus throughout the pandemic, all while rolling out the biggest and fastest vaccination programme in NHS history.

‘Now more people are coming forward for care, staff are making progress on the covid backlog with latest data showing staff delivered more than half a million more tests checks and procedures in January compared to the same month last year, while average waiting times for elective treatment are down by more than six weeks on their peak in the pandemic – so as has been the case throughout the pandemic, please come forward for care.’