A ute towing a caravan has been filmed veering out of control in front of a truck as it tried to overtake it, before crashing across the road and almost taking out another car.

The truck driver was travelling along the Bruce Highway in Queensland’s Fraser Coast in the overtaking lane as he tried to pass the ute.

‘You’ve got to give way, d**khead,’ the  truck driver is heard saying.

But instead of letting the truck driver overtake him, the ute driver speeds up and merges into the overtaking lane before he loses control and ends up on the other side of the road, narrowly missing an oncoming car.

The truck driver launched into a furious tirade following the near-miss.

‘Mate, I’m overtaking. You have to give way, you d**khead,’ he screamed at the ute driver.

WHO WAS IN THE WRONG?

‘You’re f**ked. You sped up and not let me pass and I’ve got it all on dash cam!

‘Mate, you were doing 90km/h and then you sped up to 100 right on the overtaking lane. You’re an idiot!’

‘Travelling south on the Bruce Highway south of Tiaro overtaking a caravan he sped up and then moved into my lane halfway down the overtaking lane, I could not avoid him,’ he captioned the footage.

He added it was lucky that his truck and two cars behind him were not caught up in the incident. 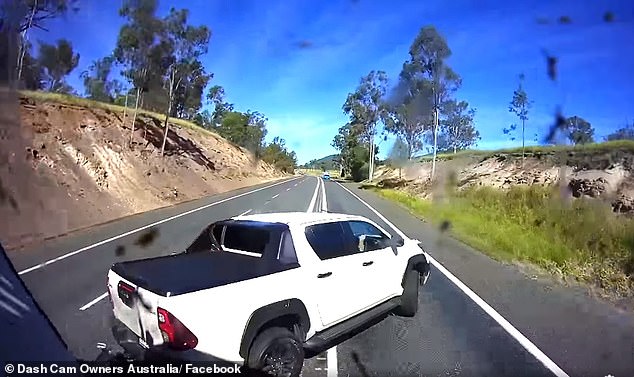 The footage attracted 343,000 views on Facebook and thousands more on TikTok within hours.

Some online viewers were sympathetic towards the truck driver, sparking a furious debate online.

‘This happens all the time on country roads. You are sitting behind a vehicle going 80km/h in a 110km/h zone,’ one woman wrote.

‘Finally you have a chance to overtake them, instead of them maintaining their 80km speed, they speed up giving no one the opportunity to overtake a slow vehicle. So dangerous.’

A man added: ‘Some pretty average driving on display here. Why the van driver felt the need to change lanes is beyond me.

‘Paid the price for his stupidity. Overtaking vehicle could have easily avoided the whole hot mess!’ 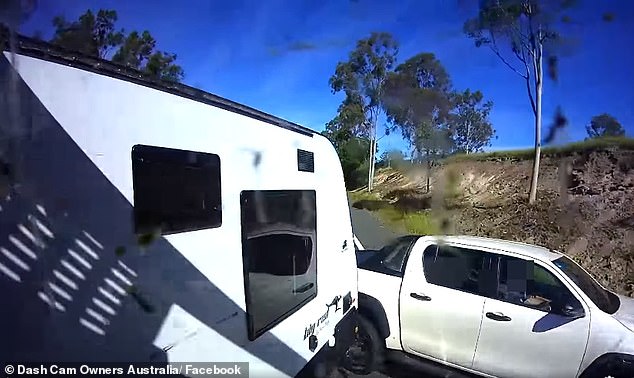 The ute driver lost control and ended up on the other side of the road, copping a barrage of abuse from the truck driver

But many others argued both drivers were at fault.

‘There’s being right and doing the right thing to avoid a collision. Both are in the wrong. Ample time to have avoided a crash, but too interested in being right,’ a viewer commented.

A woman added: ‘I see two cocky drivers that should learn a bit of courtesy and common sense on the roads. Definitely an avoidable accident but neither wanted to just “let it go” and be the bigger person.’

There was much praise for the oncoming motorist travelling in other direction who narrowly avoiding crashing into the caravan.

‘Give the guy in the blue car an award his hazard perception skill are on point. These other two, just take their license, playing silly games that could of killed people,’ one person commented. 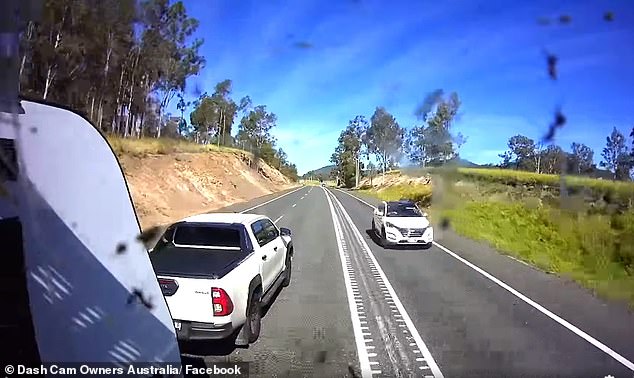