Well that’s one way to overtake! Dashcam footage shows car shooting past driver BACKWARDS in shower of sparks before coming to a halt as a crumpled heap

Dashcam footage from Russia shows the moment a car driving backwards races past another motorist as sparks fly before spinning out of control and crashing into a wall.

The out of control motor hits walls on both sides of the dual carriageway before coming to a stop.

The dashcam footage recorded in Sochi, Russia, shows a car driving backwards in the left-hand lane before hitting a wall and spiralling out of control. Sparks fly as it hits a second wall and comes to a stop

In the recording the car driving backwards is seen speeding along the left-hand lane before colliding with a wall.

Sparks shoot out from underneath the vehicle as it loses control.

It then spins around and crosses into the right-hand lane and into the path of the recording car.

The car then hits a second wall before coming to a stop.

The recording car stops behind the crashed vehicle. 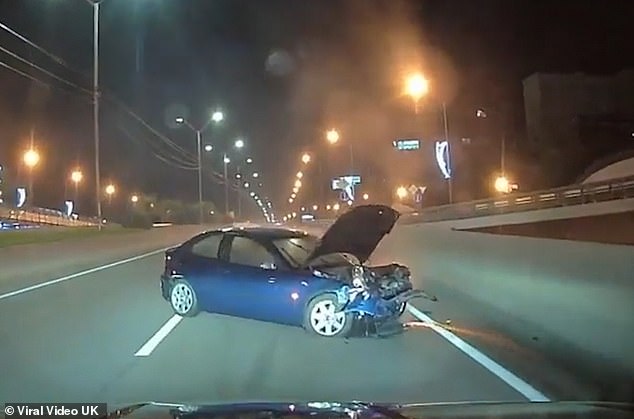 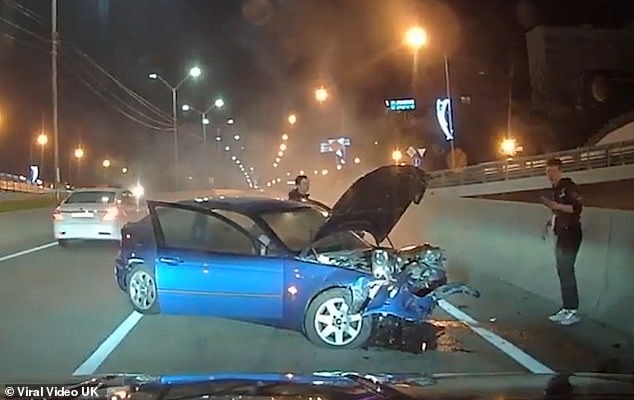 The bonnet is open, the hazard lights are flashing and the front end of the car is crumpled.

Smoke is also seen rising from the motor.

The driver and a passenger leave the vehicle and stand by the side of the road calling for help on a mobile phone.

At the end of the footage the recording car pulls into the left-hand lane and goes past the crashed vehicle.