Forty five percent of counties across the United States are currently battling uncontrollable COVID-19 outbreaks, a data map shows – as the latest models predict the number of deaths will surge by at least 20,000 in the next four weeks.

The data map, compiled by spatial analytics company Esri, shows that an ‘epidemic trend’, or uncontrollable spread, of coronavirus cases is occurring across the Sun Belt states and parts of the Midwest.

Of the 3,141 counties across the US, 1,415 are currently experiencing an epidemic outbreak and 1,103 are seeing spreading trends, which is an outbreak that could still be controlled if preventative measures are taken, the data shows.

Only a handful of states – including Arizona, Louisiana, Alabama, Florida and South Carolina – are only experiencing epidemic or spreading trends.

Mississippi, Arkansas, Georgie, North Carolina and Tennessee are the states where only one or two counties are not currently seeing an uncontrollable spread.

Texas and California – two hot spot states – have a handful of counties that have controlled the spread, according to the data map.

Currently, the number of infections across the US has surpassed 3.4 million and more than 137,000 Americans have died from the virus.

The latest modeling projects the number of COVID-19 deaths in the US to increase further – even as one research team suggests the near-universal use of masks could save 40,000 lives between now and November.

The figures, which were published by the University of Massachusetts Amherst’s Reich lab, are among the forecasts relied on by the Centers for Disease Control and Prevention.

California, Florida and Texas, which are the three most populous states in the country, will see 1,000 more deaths over the next four weeks compared to the previous four, according to the model.

Meanwhile, a newly revised model from the University of Washington’s Institute for Health Metrics and Evaluation projects the death toll will climb to just above 224,000 by November 1 – up 16,000 from a prior forecast – due to rising infections and hospitalizations in many states.

The latest forecast predicts the death toll could be reduced by 40,000 if nearly all Americans wore masks in public. 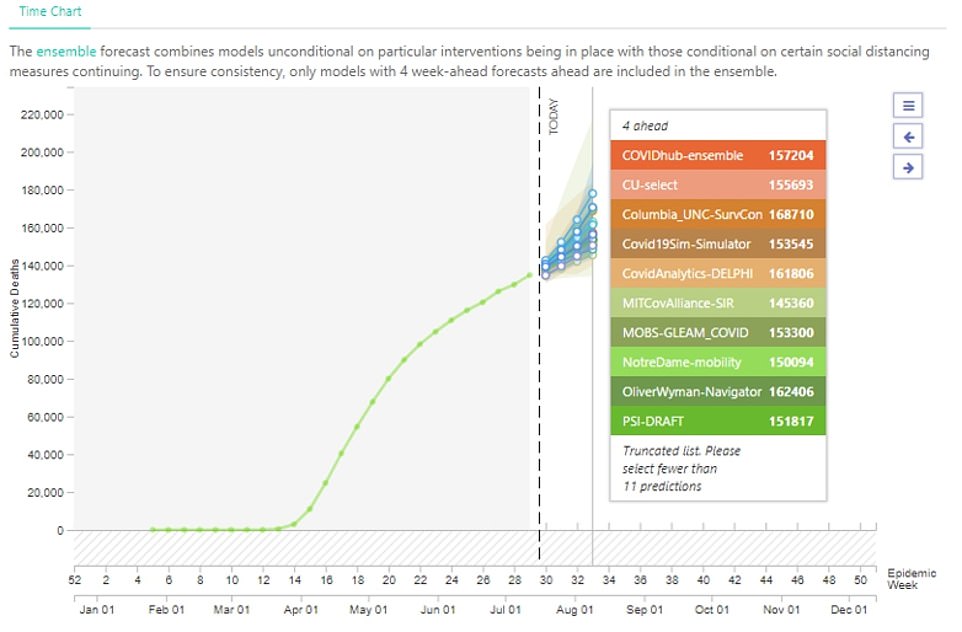 The latest modeling projects the number of COVID-19 deaths should hit 151,000 by August 1 and 157,000 by August 8, according to an average of models of 23 US and international research groups

A newly revised model from the University of Washington’s Institute for Health Metrics and Evaluation projects the death toll will climb to just above 224,000 by November 1 – up 16,000 from a prior forecast. The model predicts the death toll could be reduced by 40,000 if nearly all Americans wore masks in public 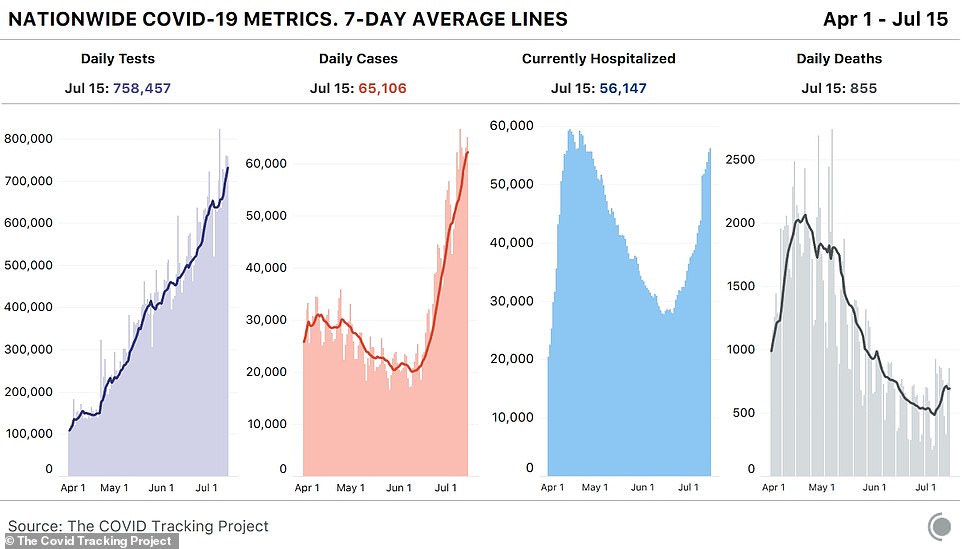 ‘Use of masks is up, but not as high as it should be. If 95 percent of Americans wore masks each time they left their homes, infection rates would drop, hospitalizations would drop, and forecast deaths would drop,’ IHME researchers said.

The IHME’s new forecast came after Alabama, Florida and North Carolina on Tuesday reported record daily increases in deaths from COVID-19 –  marking grim new milestones of a second wave of infections surging across much of the country.

The IHME’s projections have been cited in the past by the White House and are watched closely by public health officials.

It comes as the United States set yet another record for new coronavirus cases after hitting a single-day spike of 67,400 with almost half of those infections coming from Texas, Florida and California.

Forty six states reported more new cases of COVID-19 last week compared to the previous week, according to a Reuters analysis of data from The COVID Tracking Project.

Nationally, new COVID-19 cases have risen every week for six straight weeks. Cases are only falling on a weekly basis in New York, Tennessee, New Jersey and Delaware.

With the virus is spreading quickly in the southern and western states, one of the country’s top public health officials offered conflicting theories about what is driving the outbreak. 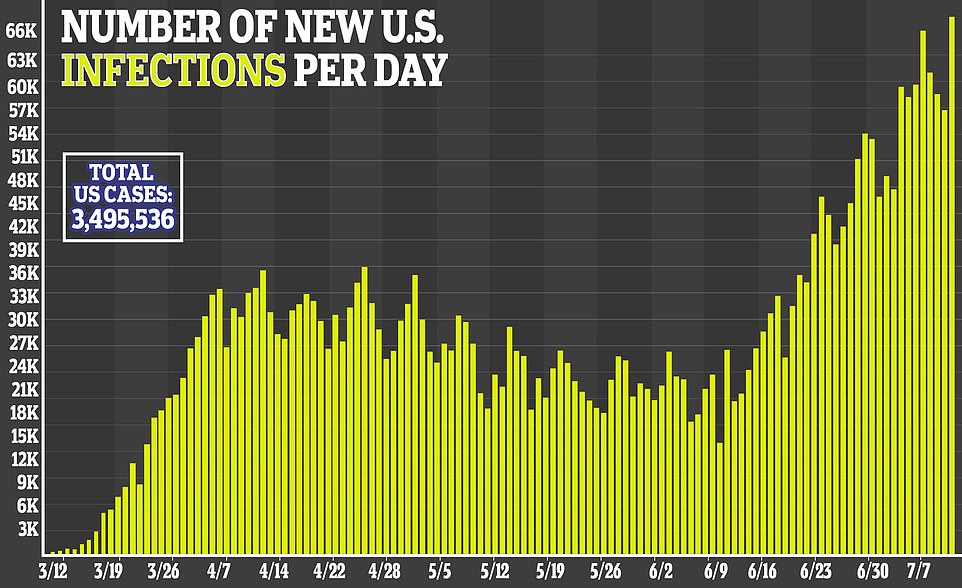 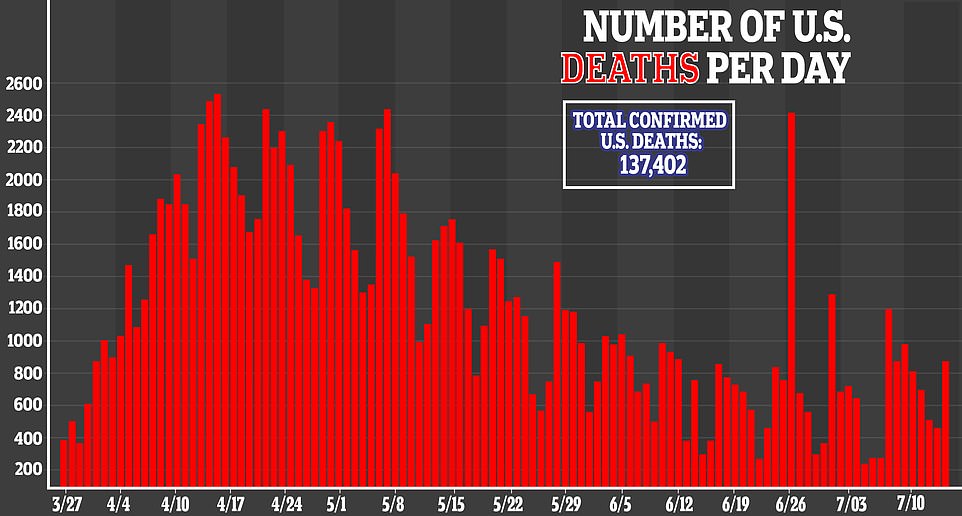 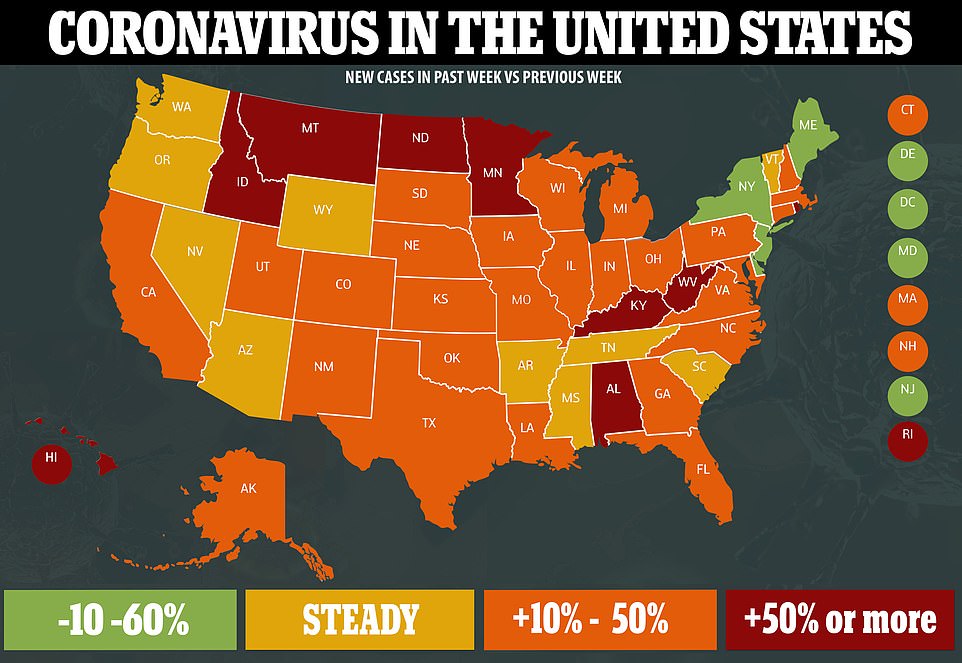 Forty six states reported more new cases of COVID-19 last week compared to the previous week, according to a Reuters analysis of data from The COVID Tracking Project

Redfield said that he believes the US could get COVID-19 under control with four to eight weeks if all Americans wear a mask and continue to social distance.