Daughter, 24, writes an open letter to the Prime Minister

A woman has written an open letter to the Prime Minister after her 84-year-old father waited in an ambulance for three hours at a hospital’s A&E department.

Annie White has also posted an eye-opening video showing 15 ambulances waiting outside the casualty unit at the Leicester Royal Infirmary.

The trainee jeweller penned a Facebook note to Theresa May following her father’s delay after he fell at his home in Barwell, Leicestershire, on Tuesday.

Ms White, 24, posted it alongside a 12-second clip of ambulances stacked up outside the hospital. The footage lays bare the current crisis in the NHS.

Unprecedented winter pressures have seen ambulance delays hit their highest total this winter, with 16,900 forced to wait for 30 minutes in the week before Christmas.

Mrs May has denied there is a crisis, but yesterday apologised to those patients who face a delay after NHS bosses announced 55,000 operations will be postponed.

Ms White, from Hinckley, hopes the open letter will ‘force the Government to listen to the NHS’, with staff desperately crying out for extra-funding.

She wrote to Mrs May: ‘I have been at the Leicester Royal Infirmary accident & emergency for five hours now. 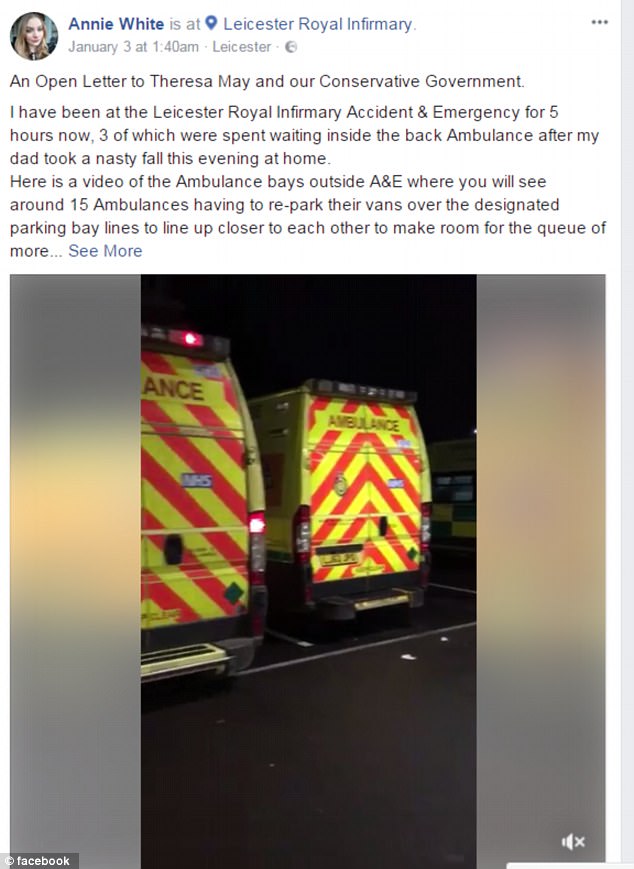 The trainee jeweller penned a Facebook note to Theresa May following her father’s delay after he fell at his home in Barwell, Leicestershire, on Tuesday

‘Three of which were spent waiting inside the back of an ambulance after my dad took a nasty fall this evening at home.

‘Here is a video of the ambulance bays outside A&E where you will see around 15 Ambulances having to re-park their vans over the designated parking bay lines to line up closer to each other to make room for the queue of more ambulances with patients waiting to be seen to.

‘Meanwhile there is an A-board erected at the front reception of A&E declaring “the current 6-7 hour” assessment waiting time with around 175 people filling the seats.

‘There is also no denying that our hospitals are understaffed and overstretched. This night has been an upsetting eye-opener confirming that our NHS is under-funded and unsupported.’

She added: ‘Our NHS works tirelessly 24/7 and 365 to save and look after us, it is a national treasure which we need to keep as nationalised as we can, at all costs.’

Her eye-opening clip, which highlights the crisis overstretched casualty units are facing on a day-to-day basis, has been viewed more than 23,000 times.

Ms White said that her father, whose name is unknown, was well looked after by the medics throughout his stay in the ambulance and in the hospital.

She continued: ‘Dad was great. He was in really good spirits. But he was getting very tired with waiting and a lack of sleep.’ 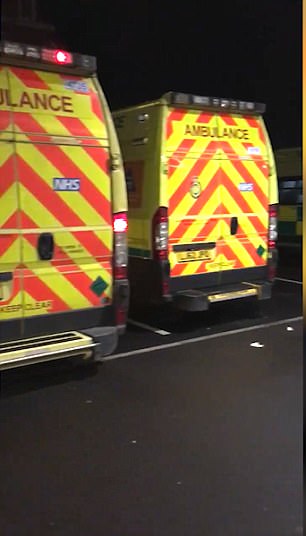 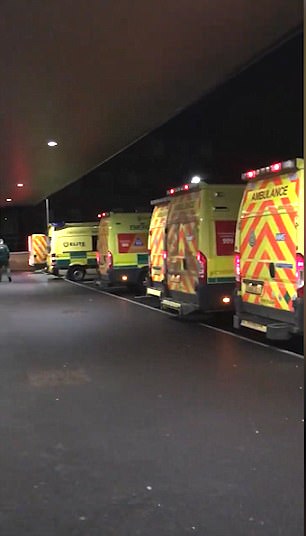 Her eye-opening clip, which highlights the crisis overstretched casualty units are facing on a day-to-day basis, has been viewed more than 23,000 times 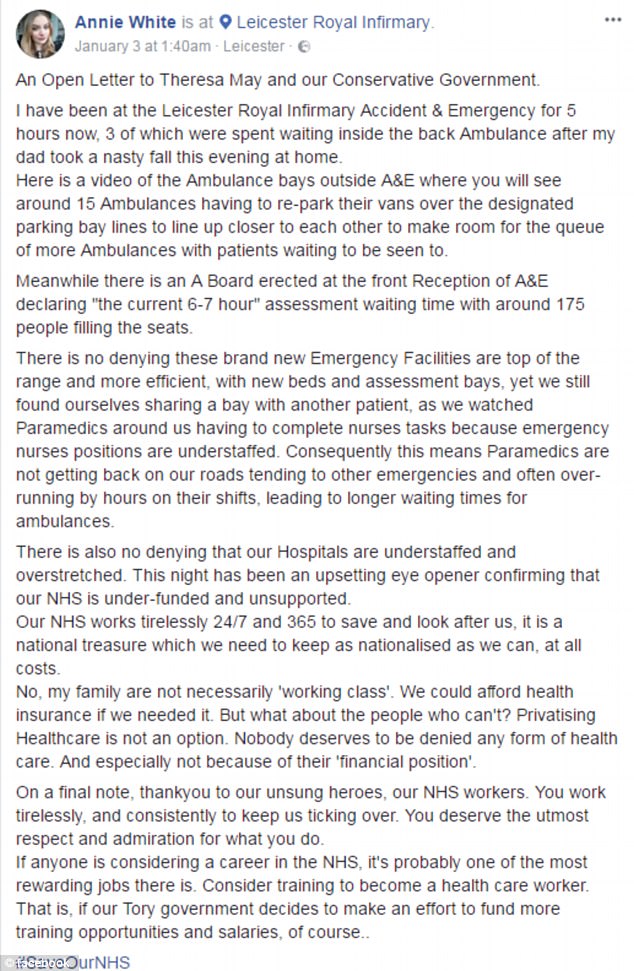 Ms White, from Hinckley, hopes the open letter will ‘force the Government to listen to the NHS’, with staff desperately crying out for extra-funding 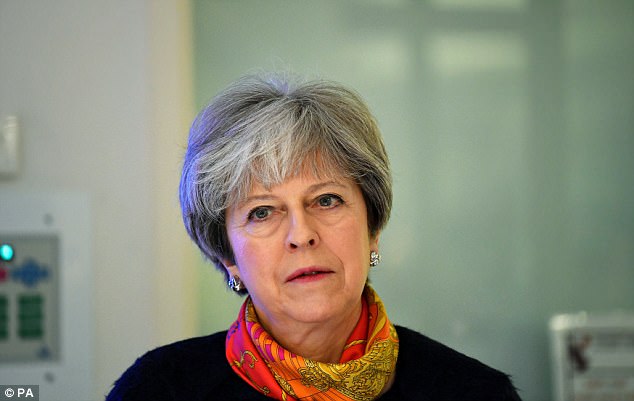 Mrs May has denied there is a crisis, but yesterday apologised to those patients who face a delay after NHS bosses announced 55,00 operations will be postponed

Ms White said her father was discharged from the hospital the next day after staying in overnight.

She said: ‘I know it was not a normal night but they were understaffed. The open letter to the Prime Minister is to try to force the government to listen to the NHS.’

Hundreds of patients were left waiting in ambulances outside the Leicester Royal Infirmary over Christmas and New Year as medics struggled to cope.

WHAT TRUSTS HAVE NO FREE BEDS?

However, it isn’t the only hospital that has succumbed to the adverse pressures and ‘battlefield’ conditions placed on the NHS this winter.

NHS England data shows that 12 hospital trusts had no beds on the New Year’s Eve – the last day figures have been collected for so far.

This figure is double that of the same day in 2016, when just six were recorded. The Red Cross branded the situation last winter a ‘humanitarian crisis’.

The figures also showed an extra 4,734 ambulances had a wait of at least an hour during the same week – more than doubling in the space of seven days.

Usually, it should take up to 15 minutes to transfer patients from an ambulance into hospital. Delays can happen when there isn’t enough A&E staff to take the patient.

Sick people were also told to drive themselves to hospital as 24 ambulances queued for up to five hours to hand over patients at an A&E in Portsmouth.

A spike in patients and staff shortages plunged Portsmouth’s Queen Alexandra Hospital into chaos on New Year’s Eve. It declared an ‘internal incident’ – which is a higher status than an extremely serious ‘black alert’.

Families have also been asked to look after elderly patients at home to free up beds as hospitals struggle to cope with the ever-increasing pressure.

John Adler, chief executive at Leicester’s Hospitals said: ‘Like every hospital across the country we have been very busy through the Christmas and new year period.

PENSIONER DIES AFTER WAITING 98 MINUTES FOR AN AMBULANCE

A pensioner has died after waiting 98 minutes for an ambulance after suffering a suspected cardiac arrest.

The unnamed man in his 60s, from Lancashire, became ill on Tuesday and his family dialled 999 at 6.07am. But the crew failed to arrive until 7.45am.

Treatment was further delayed for an unspecified time as paramedics needed fire crews help to enter the patient’s home in Chorley. 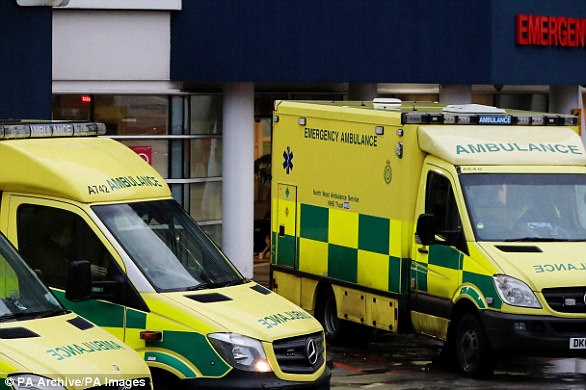 It is not known whether the man had died before paramedics reached him or if he died after finally receiving treatment.

North West Ambulance Service (NWAS) has since apologised for the incident.

The trust said the 999 call was classified as a ‘category two’ emergency as the patient was conscious and breathing – meaning the target time average is 18 minutes and a vast majority should be dealt with within 40 minutes.

An NWAS spokesman said: ‘We would like to offer our sincere condolences to the patient’s family. Our response time was not as quick as we would like.

‘We are making attempts to contact the family as part of our investigation into the incident.’ 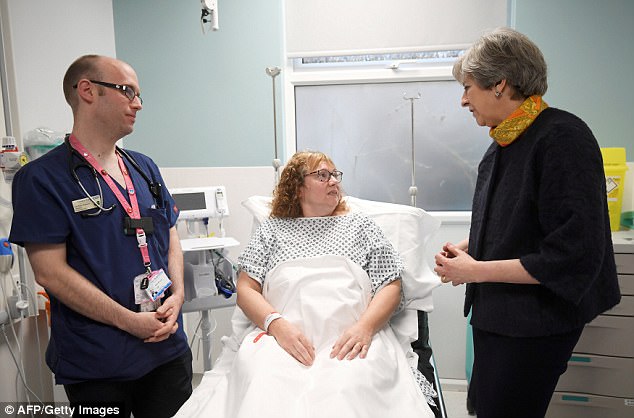 The crisis has prompted Prime Minister Theresa May to apologise for delays many patients will face after bosses announced 55,000 operations will be postponed (pictured talking to patient Sandra Dunn during a visit to Frimley Park Hospital near Camberley earlier today)

‘We have seen many very sick people, predominantly frail older patients and people with respiratory problems.

‘Many have needed to be admitted to one of our hospitals.

HOW HOSPITALS WILL TACKLE THE CRISIS

DOCTORS ON THE DOORS

‘I would like to apologise to anyone who has had to wait longer than normal for treatment in our Emergency Department.

‘During 2017 we made huge improvements in our ambulance handover times and we will continue to work with our partners at East Midlands Ambulance Service to carry that good work into 2018.’

It comes after 24 trusts issued ‘black alerts’ on Wednesday – deemed the highest level of concern, signalling beds are full or nearing capacity.

Calls to NHS 111, the non-emergency hotline, have also soared by 21 per cent in the space of a week, with 480,400 calls recorded, figures have also revealed.

The crisis, which has also been denied by Professor Keith Willett, NHS England’s director for acute care, has been described as the worst since the 1990s.

A&E staff have taken to social media to condemn the situation, revealing they are ‘ashamed’ over the ‘substandard care’ the NHS is offering.

Others have branded the crisis as ‘battlefield medicine’ and warned it is unusual for the winter pressures to begin so early.

A&E doctors also warned of severe risks to patient safety as at least 16 hospital trusts said they were on the highest alert.

Doctors say the conditions in A&E are the worst they have seen and patients are being treated in corridors due to a bed shortage.

The pressures are likely to intensify later this week, with the return of freezing temperatures predicted across the UK.

The main reason A&E units are overcrowded is because hospital wards are extremely full, so anyone arriving to A&E who needs to be admitted must wait for hours on a trolley until a bed is free.

Many of the patients occupying hospital beds are elderly and medically well enough to go home. But doctors cannot discharge them due to a lack of social care.