Jailed daughter, 25, charged in horrifying ‘womb raider’ murder in Chicago GIVES BIRTH to her own baby

One of two women charged with the ‘womb raider’ killing of a young Chicago mother earlier this year has given birth to her own baby while in custody on murder charges.

Desiree Figueroa and her mother Clarissa are charged with murdering Marlen Ochoa Lopez in April at their home.

Prosecutors say they lured the pregnant teenager to their home, strangled her then cut her baby boy from her womb and kept him as their own for weeks before they were caught, all because Clarissa was allegedly desperate for her own child.

Desiree Figueroa, 25, gave birth on November 1. She was four months pregnant when she was arrested in April and has spent the bulk of her pregnant in jail. She gave birth in a hospital under police supervision and has since been taken back to jail

Desiree was four months pregnant at the time.

On November 1, she was taken from jail to Stoger Hospital where she gave birth, The Chicago Sun Times reported on Tuesday.

She was then taken back to the Cook County Jail where she is awaiting trial. She and her mother have denied the charges against them.

It is unclear where the baby is now or what gender it is.

It was never clear why Clarissa wanted to steal Lopez’s baby when she had a grandchild of her own on the way.

The pair were arrested after police tested the baby’s DNA with that of Marlen’s husband.

On the day of the murder, they brought the infant to hospital claiming that Clarissa had just given birth to him.

Despite being 49 and showing no signs she had given birth or even been pregnant, no one from Advocate Christ Medical Center called the police. 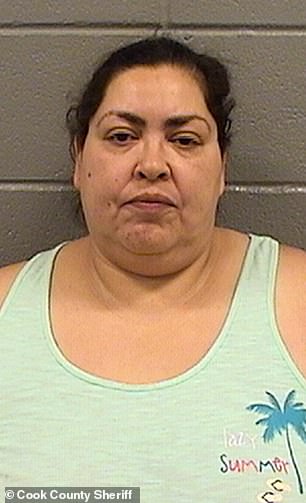 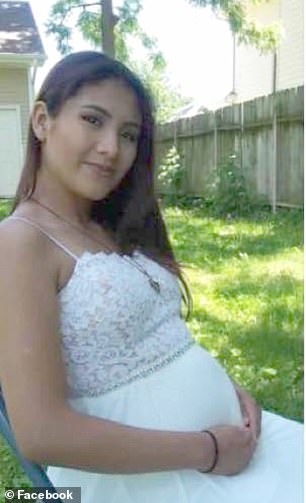 Clarissa Figueroa, Desiree’s mother, is the alleged ringleader of their plot to kill Marlen Lopez (right) and take her baby boy from her stomach

The pair are accused of cutting the baby boy from his murdered mother’s womb and then pretending he was their own for weeks. He died after clinging to life in the hospital for several months. He is shown with his father before he died

Instead, Clarissa pretended the baby was hers and asked for donations via  GoFundMe page to pay for his hospital care.

As she watched over him in the hospital, Marlen’s frantic family were still searching for her.

She had vanished after going to the Figueroa household to pick up free baby clothes.

It was not until her friends and family told police that that is where she had been that they went to the house and met with Desiree who said her mother had just given birth.

They then tested the baby’s DNA, matched it to the boy’s father and issued a search warrant for the Figueroa home.

They found Marlen’s body in a trash can in the backyard.

Along with the mother and daughter, Clarissa’s boyfriend Piotr Bobak was charged with helping them conceal a crime.

All three of the defendants have pleaded not guilty. They have also asked a judge to keep their trials private.