The 16-year-old daughter of the driver of the minibus in the horrific M1 crash over the August Bank Holiday weekend has paid tribute to her father as a ‘man of aspiration and inspiration.’

Bennita was speaking at a memorial service to her father, Cyriac Joseph, 52, who was driving a party of five other men and two women from Nottingham to London, from where they were due to catch a Eurostar.

The 16-year-old, who had collected her GCSE results which were all either A*s or As only weeks earlier, said the family feels ‘the darkness before us’.

At a memorial service at the Good Shepherd Church in Woodthorpe, Nottingham, around 500 of Mr Joseph’s family and friends paid their respects to the father-of-two.

Bennita was speaking at a memorial service to her father, Cyriac Joseph, 52, who was killed in the horrific M1 crash last month

His daughter Bennita said: ‘We lost an incredible father, husband and friend, and in his absence, we don’t know what to do.

‘Now, we feel the darkness before us. It is a great loss for us because he was the leading figure in our family.

‘He was very professional in every part of his life, and he was fully dedicated in his heart and soul to whatever he did.

‘This incident has ruined several families’ hopes and dreams, and I don’t wish upon anyone the pain and loss that my family and I are experiencing. 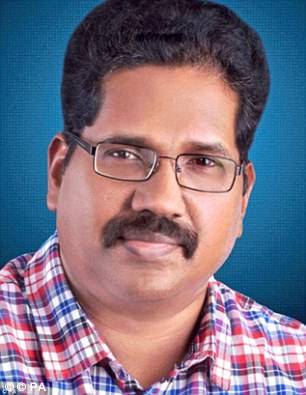 Mr Joseph, 52, moved to Nottingham from India 13 years ago and set up company ABC Travels, which he ran from his home, in 2008

‘My sincere condolences to the families of the seven people who tragically lost their lives.

‘At this moment in time, I don’t know what more to say, apart from my gratitude to all the different people who are helping in various ways. I take this opportunity to thank the emergency services, Thames Valley Police, the home liaison officer, Milton Keynes hospital staff, and the media, for respecting our privacy, but at the same time sharing the horrifying consequences of this incident.’

Mr Joseph, 52, moved to Nottingham from India 13 years ago and set up company ABC Travels, which he ran from his home, in 2008.

He was taking a group of Indian tourists to London and they were 80 miles into their journey when the crash happened on the M1 at Newport Pagnell, Buckinghamshire.

He died along with five other men and two women, while four more were hospitalised.

His son Benson said he missed his father ‘so much’ already.

He said: ‘We had not seen dad for a while. He stayed home [and didn’t go on a family holiday] so he could keep running the company. That’s when he agreed to take these clients. We hardly saw him after we got back. I miss him so much already.’

Mr Joseph leaves behind wife Ancy, a cardiac nurse at Nottingham City Hospital; son Benson, who had just been offered a place at the University of Birmingham to study Cyber Security; and daughter Bennita, who had just collected her GCSE results. 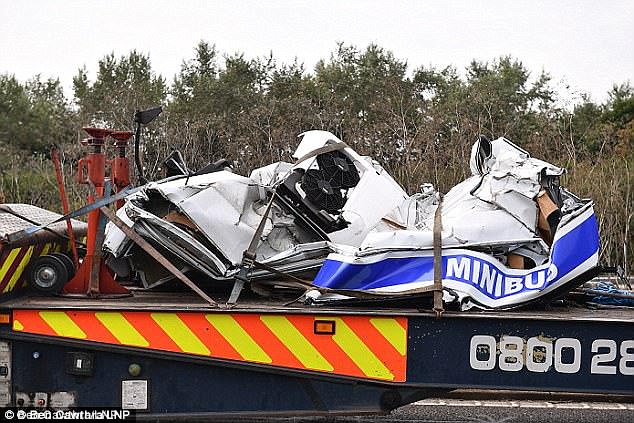 Mr Joseph was driving the party of five other men and two women from Nottingham to London, from where they were due to start a tour of Europe

Family spokesman Matthew John said: ‘He was a very important figure for this community, as you can gather from the number of people who are here.

‘He was a great father, a great leader for the community, and he was very professional in every aspect of his life. These are difficult days for all of us.

‘He was a great leader, and he always had a strong opinion, and he had no hesitation to give his opinion to anybody, regardless of who they are. Also he was very kind to people, he would always help people, and that makes him more special.

‘It’s a disaster for the family, and as his daughter pointed out, it’s ruined their lives. They don’t know what to do, they have got darkness in front of them.

‘We all come from a strong Catholic background, we believe in Jesus, and we believe there is life after death, so that’s how we comfort ourselves.’

Two men have been charged in connection with the incident.

Masierak, of Evesham, in Worcestershire, made no application for bail and did not indicate how he would plead to the charges.

He was remanded in custody to appear next at Aylesbury Crown Court on September 26.

He appeared at Milton Keynes Magistrates’ Court on Monday morning.

Dressed in a dark suit, Wagstaff, who was driving a Mercedes lorry at the time of the incident, did not indicate how he would plead to the charges.

He was granted bail on the condition that he is not to leave the UK without prior approval of the Crown Court.

The case was sent to Aylesbury Crown Court, where Wagstaff will appear on September 26.

The death toll is believed to be the highest on a British motorway since November 1993, when 12 children and their teacher died after a crash on the M40.