Daughter’s ‘stomach bug’ was something much worse

Internationally acclaimed fitness role model Tammy Hembrow recently revealed how a horrifying scare with her sick daughter taught her the value of trusting her gut instinct.

The Queensland mother-of-two shared how her one-year-old girl, Saskia, became sicker and sicker over the holidays, leading to a series of doctor and hospital visits in a bid to find out what was wrong with her.

Tammy opened up on the horror of the ordeal, which was thought at first to be a stomach bug but turned out to be acute cerebellar ataxia, on a recent YouTube video.

She revealed that she first knew wasn’t right with her daughter after she woke from an afternoon nap,

‘[She was] screaming, as if she was in pain or something. She’d never done that before,’ she explained.

Fitness entrepreneur Tammy Hembrow with her one-year-old daughter, Saskia before the ordeal of Saskia’s illness began (both pictured)

Tammy continued: ‘I immediately knew something was wrong.

‘I tried to see if she could stand and she just couldn’t try to stand at all.’

Despite both her and her partner, Reece, checking baby Saskia’s body for any abrasions, neither could feel, or see, anything that was obviously wrong.

Naturally, Tammy took her daughter straight to the family GP and as she was being examined, she projectile vomited, leading the doctor to suggest she had a stomach bug.

‘They said to take her home and see how you go and told me to keep her hydrated with clear fluid,’ she said.

‘I thought she would eventually recover, and that I just had to make sure I kept giving her lots of fluids throughout the day.’ 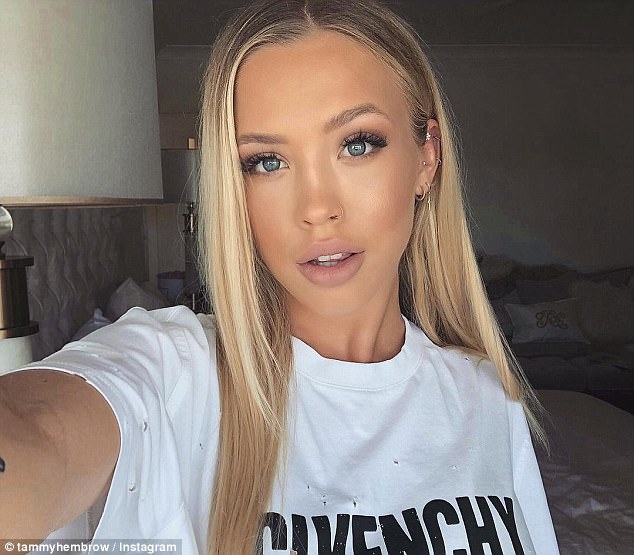 While there was a little improvement overnight, Tammy said the next morning Saskia was showing signs of still being very ill.

‘The next morning she was super sick again, throwing up straight away when she woke up,’ she said.

‘I took her back to the hospital and I was telling them how she still couldn’t walk and they explained how when you have a stomach bug, your body hurts. But I thought it was weird. I felt like something else was wrong.’ 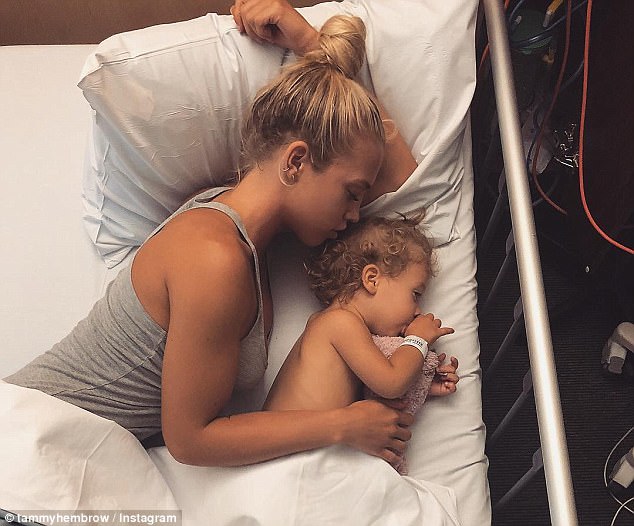 Tammy revealed Saskia was admitted to hospital twice and that while she was stable at times, she would deteriorate again quickly (both pictured)

Tammy explained that Saskia was admitted to hospital at the time so she could be put on a drip to help keep her hydrated.

Again her daughter seemed to show some improvement, she said.

‘In the morning she was holding down food. She seemed a lot better and I thought “let’s go home”.’

But the worst was yet to strike. Not long after the family had returned home, and Saskia had been put down for a nap, she woke up and her eyes were ‘literally rolling around everywhere, Tammy said.

‘They were going cross-eyed. I almost had a heart attack, thinking “what is going on?”,’ she added. 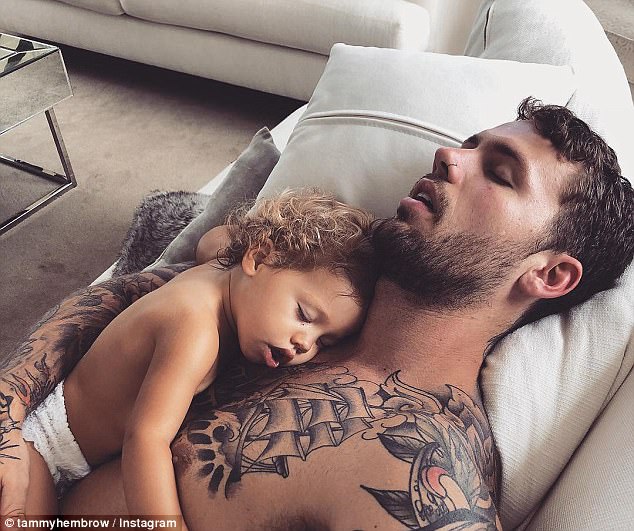 The family went to the doctors again, but by this time Saskia’s eyes had stopped rolling.

‘I was freaking out thinking what the hell is happening to my baby,’ Tammy continued.

‘Then five minutes later it happened again. Her eyes were rolling back, but it wasn’t like a seizure.’

Taking immediate action, the frightened mother said she raced back to the hospital with her sick girl in tow. But by this time Saskia’s eyes had stopped rolling again, making it difficult for doctors to see how acutely ill she was. 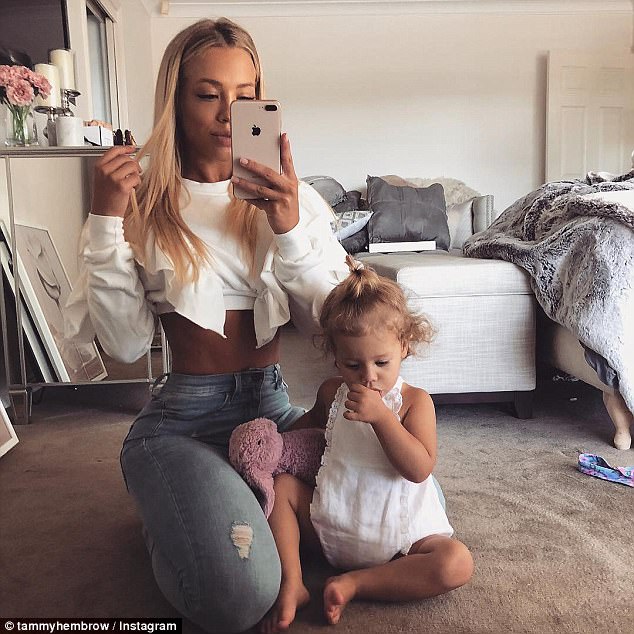 The condition Saskia was diagnosed with affected her ability to walk. This was the first indication to Tammy something was seriously wrong (pictured together)

‘The doctor put her on the ground to see if she could walk, but because she wasn’t far enough away from me and kept clambering on to my lap, he said she could walk but didn’t want to.

‘At that point, I was thinking “no, she actually can’t walk”, but you trust a doctor and I thought he was probably right, I’m probably just overreacting.’

Though Tammy tried to explain her daughter’s eye-rolling, this was put down to her being tired and hot, however, Saskia was admitted to hospital again for observation.

Though nurses tracked Saskia’s vitals over the course of the day, she remained stable. But things got much worse that night, one Tammy described as ‘terrifying’. 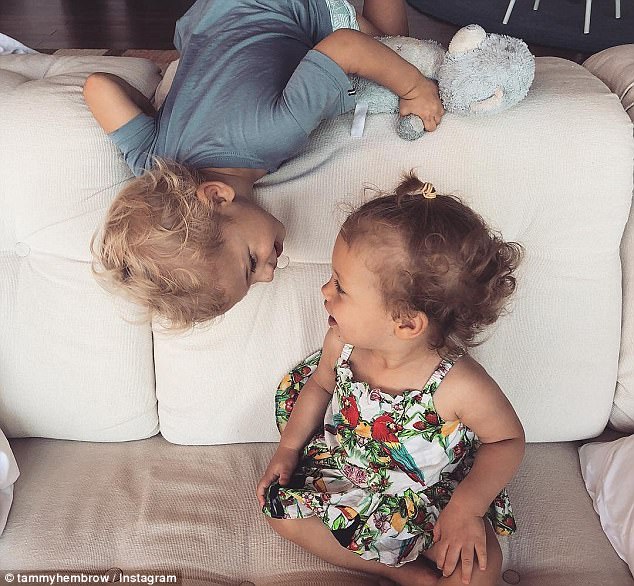 Baby Saskia (pictured right) with her brother Wolf (pictured left). The ordeal has been a difficult time for everyone

‘She kept vomiting and her eyes started getting worse and worse. Basically, it became constant. They wouldn’t focus on anything. They’d roll up and then flicker back down, then roll up and go cross-eyed.’

‘It was really hard for me to watch. I got the nurses in to see what was happening and I filmed it on my phone in case it stopped,’ she added.

‘I was just freaking out.’ 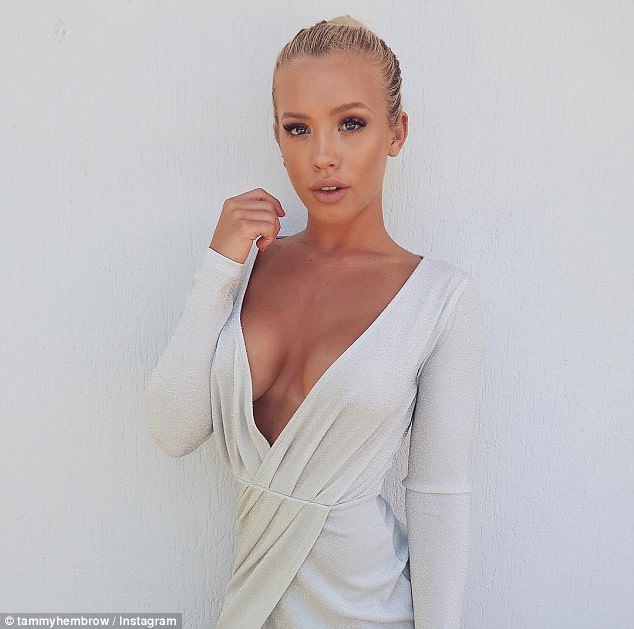 The normally cool, calm and collected Tammy was said she was ‘freaking out’ after yet another horrifying night in hospital with her very sick child

When a doctor saw the pair the next morning, he organised a transfer to another hospital for an MRI and a spinal tap. Thankfully, both tests came back clear.

Impaired coordination in the torso or arms and legs

Frequent stumbling and an unsteady gait

‘We were in the hospital for a week, they started her on antibiotics and anti-viral medication, just in case,’ Tammy said.

‘She started getting so much better, sitting up and standing and finally walking again.’

When Saskia was diagnosed it was revealed she was suffering from acute cerebellar ataxia.

The condition, which is a form of cerebellitis occurs when the cerebellum in the brain, responsible for movement, becomes inflamed or damaged.

Ataxia can strike anyone but is most commonly affects children under the age of eight, according to Healthline.

A full recovery is expected in around 90 per cent of those diagnosed with ataxia, with no lasting damage. Generally, recovery can take anywhere from 10 days to two months. 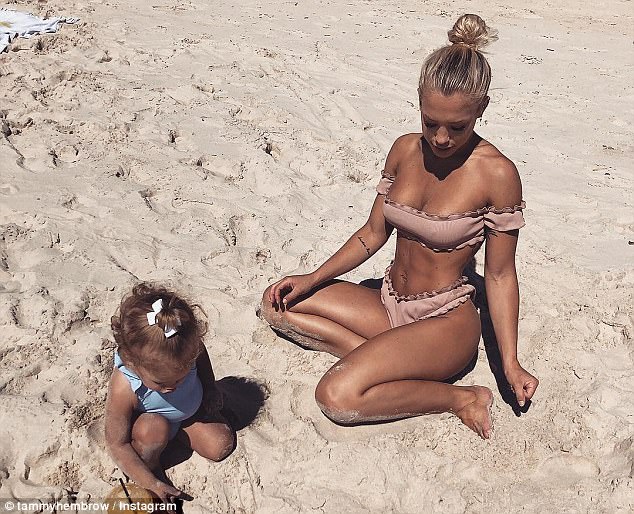 Though recovery has its ups and downs, Tammy revealed, every day Saskia is getting a little bit better

‘Of course, anything to do with the brain is really scary.’

Now the family are back at home, and while Saskia is a bit up and down, Tammy said she remains optimistic her daughter will recover fully.

‘I am so glad she seems to be improving every single day,’ she concluded.