David Beckham is BANNED from driving for six months

David Beckham, pictured arriving at court today, could face a driving ban at court over using his mobile while driving last year

David Beckham has been banned from driving for six months and been ordered to pay a £750 fine after admitting using his phone while driving in November.

Wearing a sharp grey suit and tie for his appearance at Bromley Magistrates Court today, the former England captain was given six points on his driving licence and banned.

He was banned from the roads by District Judge Catherine Moore, who added six points to his licence which already had six points on it from two previous speeding offences.

Beckham showed no reaction as the sentenced was passed down.

He appeared and confirmed his name as David Robert Joseph Beckham and gave his address as Holland Park, London.

Judge Moore ordered Beckham to stand up and then said: ‘I take into account it was slow moving traffic but that’s no excuse.

‘It still creates a risk to others. I disqualify you for six months and that starts immediately. That’s no driving a car or a motorcycle for a period of six months.’

She warned him that if he drove while disqualified it would be another offence.

Upon leaving the hearing Beckham, who had arrived at court in a chauffeur driven black Range Rover, got back into the car and departed without speaking to the press. 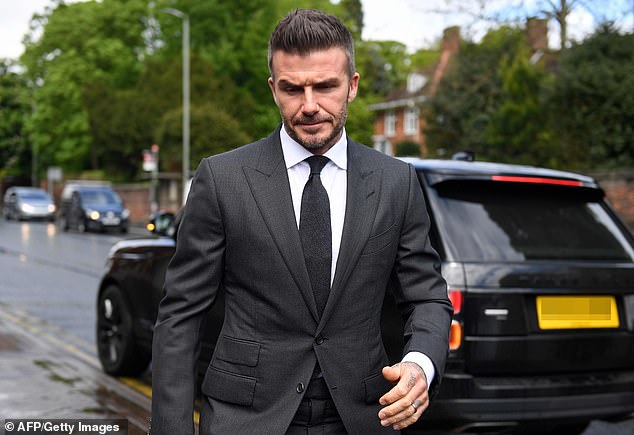 ‘On 21 November last year at 1pm the defendant was seen in a Bentley in slow moving traffic. He was seen by a member of the public looking at his lap.’

He said the member of the public spotted a mobile phone on his knee. He took photographs of Mr Beckham.

Defence solicitor Gerrard Tyrrell said: ‘Mr Beckham has no recollection of the day in question or this particular incident. He has seen these photographs.

‘It looks like it was stationary traffic. That’s no excuse. As he can not remember he pleaded guilty which he has done.

‘Mr Beckham likes driving. He drives a lot. He takes his children to school each day when he can and he picks them up when he can.’

Scotland Yard previously said the father-of-four had pleaded guilty by post. Two months before he was reported for the offence, Beckham was criticised after avoiding prosecution on a speeding charge because of a technicality.

The hearing was a sentencing after he was caught on his mobile in a £100,000 Bentley in central London last November.

The father-of-four pleaded guilty to the charge by post and was set to be dealt with at Lavender Hill Magistrates’ Court last month but the hearing was postponed because Beckham was in the US.

Sean Joyce of Stephenson’s Solicitors told MailOnline that Beckham did not technically have to attend court, as he was not on bail but that his best chance of a more lenient result was to turn up in person.

Beckham’s ban came into force under ‘totting up’ rules, where the six points he was handed for the offence were added to the six points already on his licence.

Mr Joyce said the only way of avoiding an automatic ban under these circumstances is for the defendant to argue ‘exceptional hardship’ – which multimillionaire Mr  Beckham did not do.

‘But he could have been banned for longer,’ Mr Joyce said.

A six month ban is the minimum which can be enforced in these circumstances.

Beckham’s case was previously set to be resolved via a single justice procedure, a hearing behind closed doors where one magistrates can choose to impose points or a fine as punishment.

Court officials last month said it was now listed as a ‘disqualification hearing’, but they admitted they did not have his driving record yet and were unaware how many points were on his licence.

Driving while using a mobile phone can carry a disqualification penalty as well as a maximum fine of £1,000. The offence usually results in six points on a licence.

She added the court would only have an up-to-date version of his driving record a few days before the sentencing. 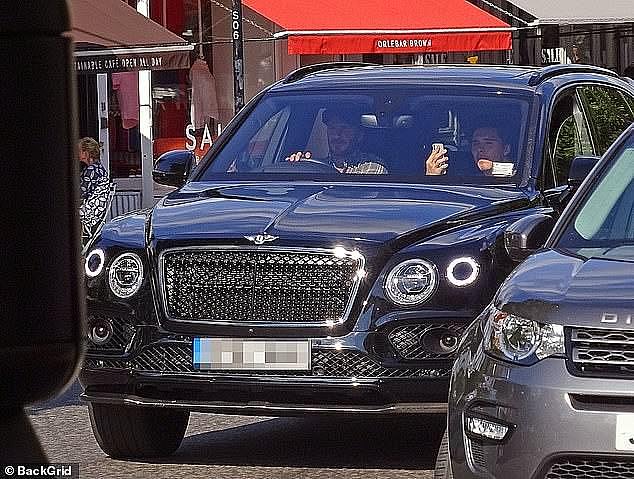 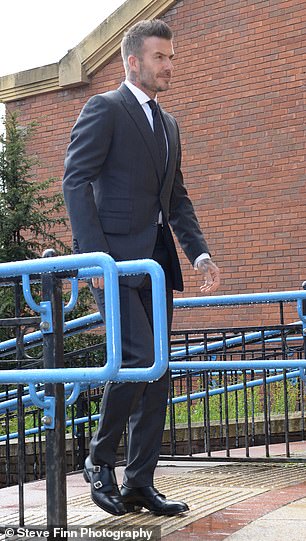 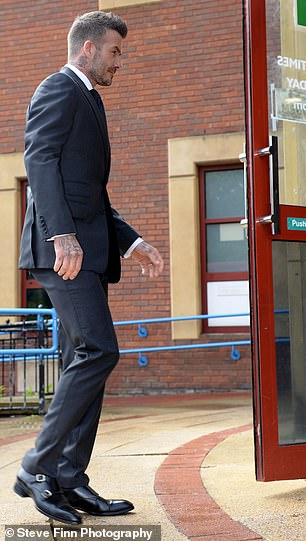 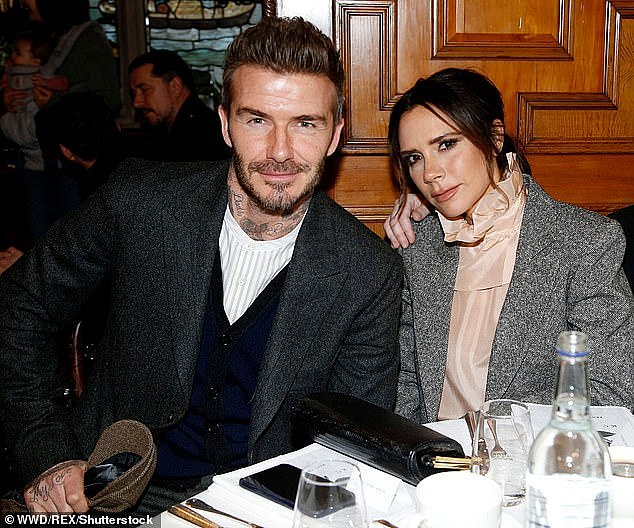 It is understood the 43-year-old father-of-four asked for the hearing to be moved so he could attend and accept responsibility for the incident. He is pictured with wife Victoria

According to the charge the former Manchester United and Real Madrid star was spotted driving his 2018 Bentley while using his phone in Great Portland Street on November 21.

Beckham previously avoided a speeding prosecution for driving a loaned Bentley at 59mph in a 40mph zone in west London two months earlier.

Celebrity lawyer Nick Freeman argued a notice of intended prosecution (NIP) was not received until one day after the statutory 14-day limit.

The technicality meant he did not face any further action. He did not attend that hearing at Wimbledon Magistrates’ Court and opted for it to be heard in his absence.

Beckham was accused of ‘shirking his responsibility’ as a role model to young people and other footballers after avoiding prosecution.

There was outrage among lawyers and road safety campaigners and Joshua Harris, director of campaigns for Brake, said was ‘hugely disappointing’ to see the role model ‘getting off a speeding prosecution on a mere technicality’.

Mr Freeman also assisted Beckham overturn an eight-month driving ban in 1999 after arguing that the footballer was trying to escape a paparazzi photographer. 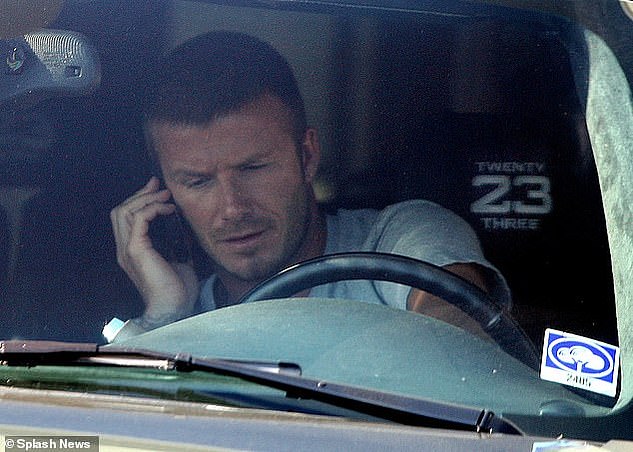 Beckham, pictured using his phone in a car in the US in an unrelated incident, was caught on his mobile in a Bentley in central London last November

Joshua Harris, director of campaigns at road safety charity Brake, said: ‘Using a phone when behind the wheel can impair you as much as driving drunk – it’s simply dangerous and can never be condoned.

‘Those who ignore the law and use a phone while driving, as Mr Beckham has done, selfishly put lives in danger and deserve to be punished accordingly.

‘A single moment’s inattention behind the wheel can have catastrophic and lifelong consequences and so we urge everyone to put their phone on silent and out of reach when driving.’

What does the law say on using a mobile phone behind the wheel?

In the UK, it is illegal in most situations to use a hand-held mobile phone or similar device – such as a sat nav or camera – while driving a car or riding a motorcycle.

These rules apply even while stopped at traffic lights or queuing in traffic. Some laws target handheld devices only, while other laws affect both handheld and hands-free devices.

Motorists can only use a hand-held mobile in the case of a genuine emergency that requires a 999/112 call and it is not safe or impractical to pull over and park. Drivers are obliged to remain in full control of their vehicles at all time.

If a police officer feels the motorist is not in full control because they are tuning their radio or using a satnav or phone in a cradle, they may also face prosecution.

Drivers supervising learner drivers or riders are also banned from using hand-held devices despite being in a the passenger seat.

Motorists can only use a hand-held device if their car is safely parked in an appropriate location.

Pulling over to the hard shoulder to take or make a call could result in prosecution. Breaching the legislation can result in six penalty points and a fine of £200.

If the case goes to court, the driver or rider could face a ban and a maximum fine of £1,000. Drivers of buses or goods vehicles face higher fines of £2,500.

Motorists with their phones or satnavs attached to their windscreens can also face prosecution, if the area swept by the windscreen wipers is obscured.